Cosmodread is the followup title to 2016’s Dreadhalls which is one of the most hallowed VR horror titles available on just about every single headset out there.  In this sci-fi roguelike, you play as an astronaut who is trapped on a derelict space shuttle and you must activate all the ships components while trying to survive the horrors that plague the ship. 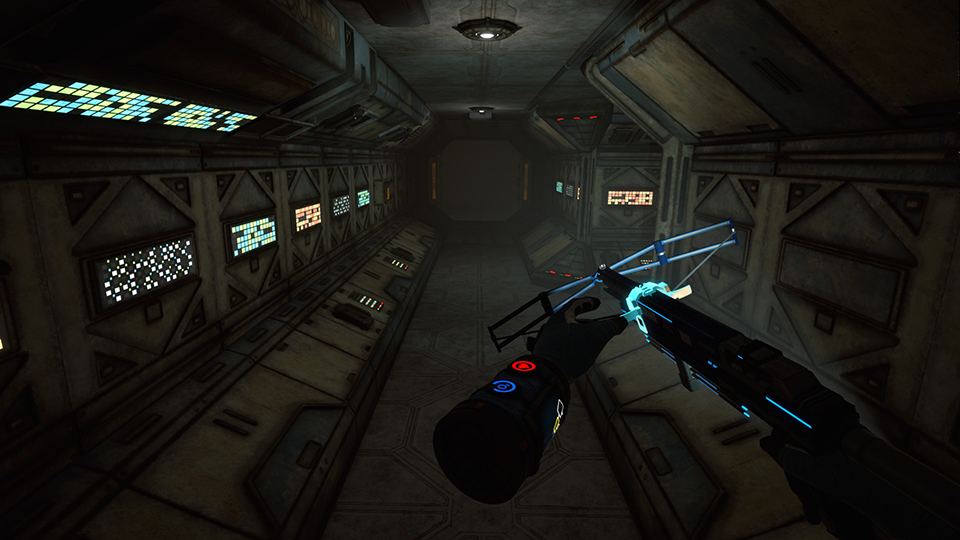 It’s just you and the ship…and certain death.

Standard FPS controls are in effect here though unlike Dreadhalls minimal use of mechanics outside of movement, lanterns and surviving the horrors you stumble across you’ll have a lot more to contend with in space.  That same core formula is here though is built upon substantially making for a game that feels much more…complete.  The derelict ship you must escape from has no oxygen, so you’ll be forced to constantly refill your air supply with small canisters found throughout the ship.  Monsters and ship defences roam the corridors though you aren’t helpless and will start off with and find a few different weapons like a crossbow or shotgun, scattered throughout the game.  Ammo is scarce though and missing even a single shot can be a dire mistake so it may be in your best interest to avoid them if possible, or setup an explosive trap using items found in the facility.  Those items are more than just decorations as almost everything you find can be broken down into ingredients for crafting stations that let you create ammo, oxygen, traps tanks and just about everything else you find in the game…assuming you have the schematics to do so.  Those schematics are found on data discs randomly placed around the map and need powered consoles to access said data.  Nearly every room has power stations that require batteries to power nearby electronics and lights with batteries typically only containing 1 to 3 charges so every time you place and remove a battery it reduces the amount of times you can use it again.  Thankfully, you have a wrist mounted flashlight that is always ready to go but it’s always nice to light up the next area as opposed to relying on the focused light from your hand.  Those batteries are also needed as components for your fabricator with all of those elements coming together to make a game that never let me rest and had me mulling over almost every decision I made with regards to resources…all while my oxygen slowly depleted. Additionally you’ll also unlock modifiers that can make the game more or less challenging like swapping out enemy types, increasing storage capacity or speed, but at the cost of health and so on and so forth. As this is a rogue-like, should you die you need to restart the game with the layout of the ship changing though any schematics, found weapons & audio logs will be available as options when you restart. 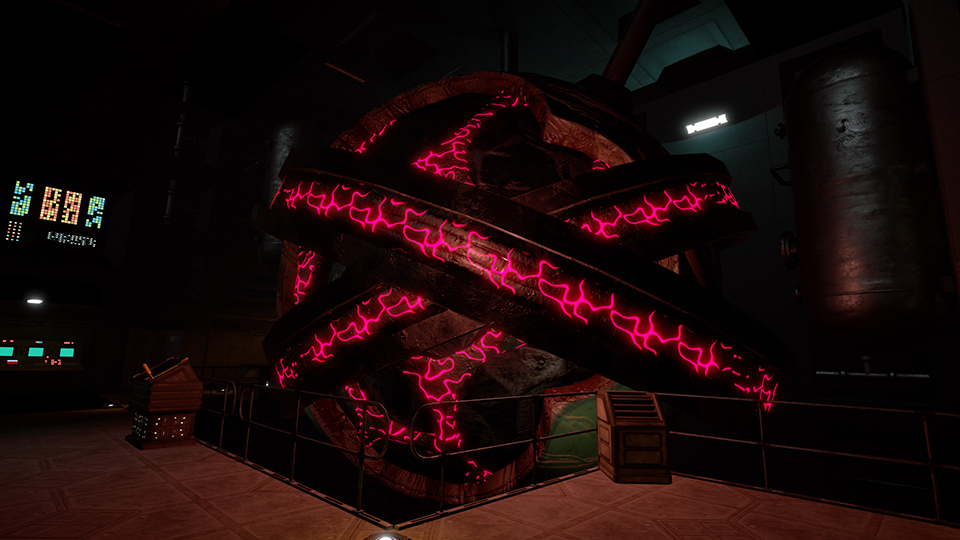 You need to restart the ship!

Amplifying the terror that could be around each corner is the perpetually dark rooms and corridors that make up the ship.  This a very dark game and whether you play on the PC or Quest, the visual presentation is largely the same minus a few details.  The ship has been infested by a variety of biological creatures, many of which roam around looking for their next victim ie. you.   The creatures and security systems look the same on either platform with a bulk of the Quest’s visual sacrifices affecting your surroundings.  There’s a fair bit more detail on the environments on the PC side with all that alien grossness just looking more disgusting thanks to some extra pulsating growths and higher quality in the details though any differences are superficial and the Quest version still delivers on all the scares and unease this game provides.  The monsters you come across are horrific and come in a few variety’s, each with their own attacks, strengths and weaknesses though the latter might not be apparent until you die, as when you die you’ll be treated to a helpful hint centered around the method of your demise and how to avoid it next time.   Every time you restart puts you back in the same room and your handy wrist-mounted mini-map help guide your way which is needed as it can be very easy to lose your bearings as many of the rooms look the same.  Lighting effects are on point with your flashlight providing just enough light to see through the hazy atmosphere that pervades the ship.  It’s not the prettiest game and those expecting AAA presentation, especially compared to similar titles like The Persistence or From Other Suns, should temper those expectations but what’s here more than does the job of keeping you on edge and fearing your next encounter. 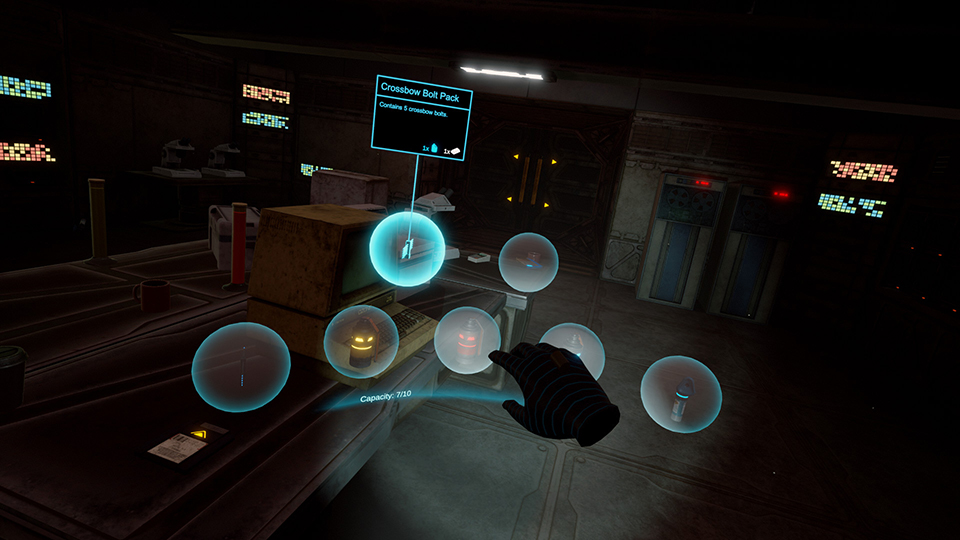 Inventory management will be key to your survival

No horror game is complete without some outstanding sound design and that is a department that Cosmodread shines in as well, but I do have 1 issue.  When monsters are nearby, they’ll groan and growl or make whatever noise they make and the 3D audio is on point but the environmental sound bytes are way too loud and way to frequent.  In my initial play, every sound had me looking around to see what made it and I soon realized that nothing was there almost all the time.  Walking through disgusting hallways with everything making squishy noises is awesome,but when you hear the sound of a nearby monster through walls or nearby yet never find the source it became all to easy to just ignore those random sounds in my subsequent plays. By no means is that the end of the world and when compared with the overall package here, it’s a minor complaint, but a complaint nonetheless.   Music will be key in knowing when enemies are nearby as it kicks in when foes are close and could be your first sign of trouble and when that music abates, you can rest easy…at least for a few seconds.  Audio logs shed light on the situation you have found yourself in and, when the game isn’t trying to scare you, the creepy quiet atmosphere with the occasional groans of the ship make for a wonderfully intense atmosphere.

Despite any issues I have mentioned up to this point, I am really digging this game. It’s not always fair as is the roguelike formula with some runs going much better than others but that’s sort of the name of the game with this genre.  After more than a few deaths, those game modifying options offer some great trade-offs and once I got the lay of the land and knew what my objectives were, it became much easier to get started.  The need for extra oxygen had me constantly scrounging for scraps and ever pushed me forward to the next room because when supplies dwindle, death looms.  Ammo is scarce so traps and distractions will be key in making every shot count but the more you play, the more options you will have for your fabricator, making the game somewhat easier though by no meas does it ever get easy.  Health can be replenished by finding or creating some syringes though on my 1st 3 plays I didn’t even know they existed which is how the formula for this game works.  You never know what you are going to find next which makes every locker, cupboard and storage container a treat as the game could surprise you with a much needed item or new schematic that could change the way you play. 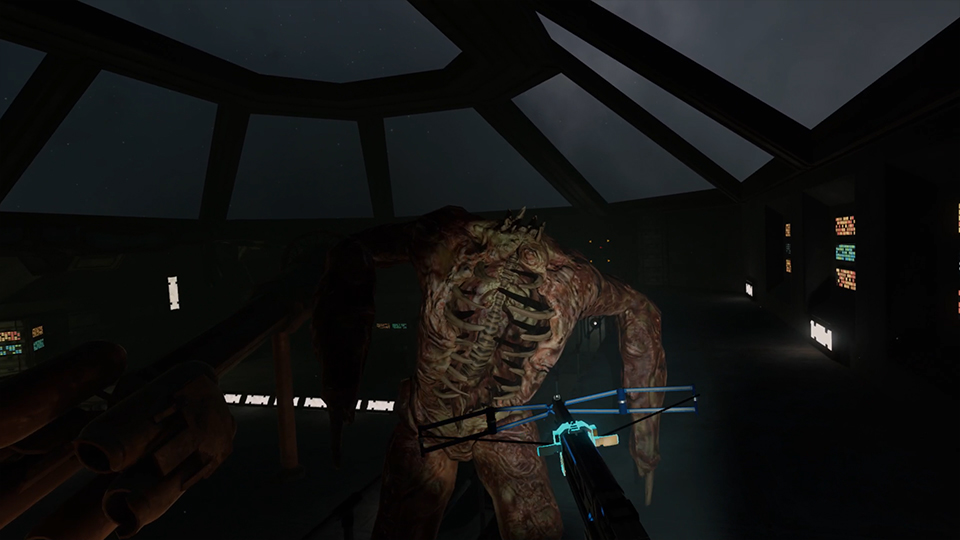 Cosmodread does what it needs to, to be one of the most addicting, fun and suspenseful games I have played in awhile and is arguably the best game we have seen for the Quest headsets since the launch of the Quest 2 offering up a decently lengthy campaign with plenty of replay value and the drive to play ‘just one more time’.  It shows just what the Quest headset is capable of and while it may look a less than stellar compared to PC counterparts, the gameplay loop in here has been refined to near perfection making for a survival-horror rogue-like that rivals the best games in this genre.

What would I pay? $15 US is an easy ask for this.  Despite my misgivings, there is a ton of game to get through and it’s pretty damned addictive.  Horror junkies should rejoice as Cosmodread never lets up on the scares and fans of roguelikes should eat this up like candy!

White Door Games provided The VR Grid with a press code for this title and, regardless of this review, we thank them for that!