If there’s one genre in VR that’s already starting to feel outdated, it’s the wave based shooter. In the early days of VR this genre provided a simple, exciting way to incorporate shooting mechanics into a VR game without any motion sickness concerns but in recent years developers have created novel ways to overcome motion sickness and we’re seeing far more sophisticated and complex games hit the market nowadays. Galactic Rangers feels like a throwback to those early days of VR. It’s a fairly typical wave based shooter that places you on a platform and equips you with two multi-purpose guns (one each in hand) that can transform into shields as needed. Waves of enemies hurtle towards you and you have to dodge or deflect their incoming shots while doing your best Boba Fett impression to take them down. 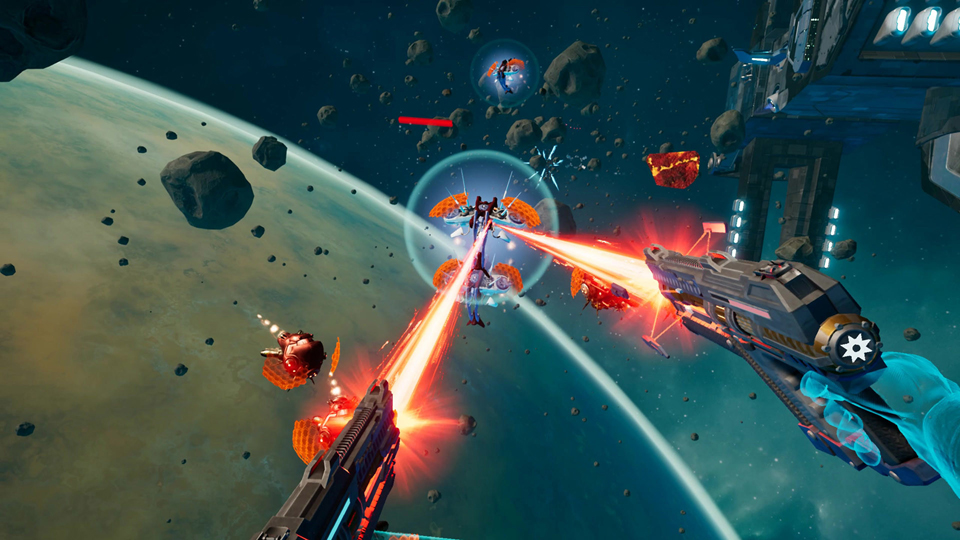 Anyone who has played Space Pirate Trainer will know exactly what to expect here and Galactic Rangers is a pretty brazen imitation of that game. The one big difference with Space Pirate Trainer, and actually with most wave based titles, is that in Galactic Rangers your platform, which is very reminiscent of a Star Wars landspeeder, is racing through a huge space battle and flies around larger ships and space debris as the battle unfolds. This works really well and adds hugely to the sense of spectacle. It’s very cool to see larger ships warping in and out of the battle as you speed through debris while shooting at space samurais that are trying to board your speeder. The sense of scale and the sheer chaos of everything happening around you is very immersive and adds greatly to the feeling that you’re taking part in an epic space skirmish.

There are also separate levels to travel through, each of which has their own visual design and develop in different ways. It’s amazing how having variety in levels, and a sense of progression through them, enhances the typical wave-based format. It makes the game feel much more alive and dynamic than a typical wave based shooter. It’s a shame then that currently there are only 4 levels in the game. This is a sparse offering and you will have seen all the game has to offer within 1-2 hours. There’s the suggestion that there will be more episodes at some point, but as of the time of this review you can only access Episode 1. There is also a ‘Defence Mode’ but this places you on a stationary platform and just throws different enemy attack patterns at you. Essentially, this mode removes the best element of the game and actually feels even less optimised than the rest of the game (more on this in a moment). 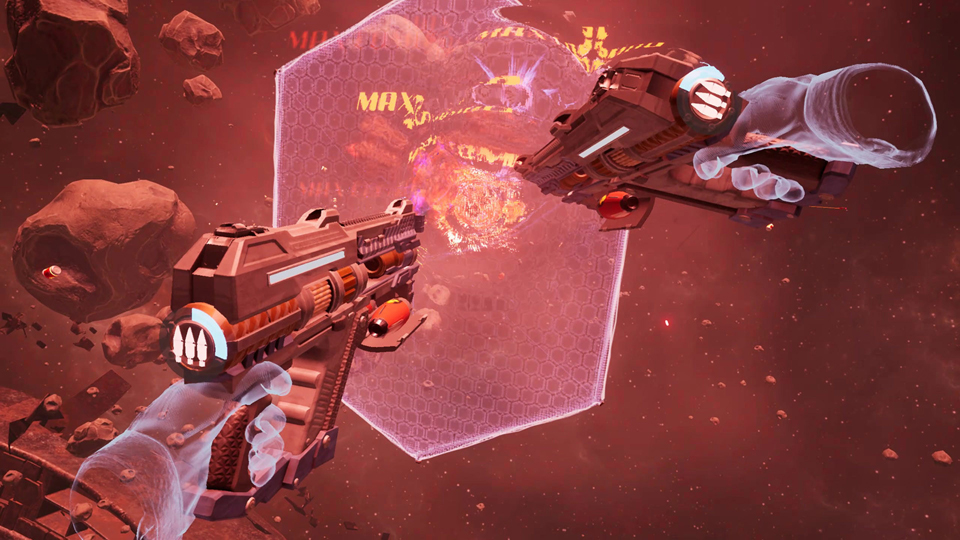 While fun, the gunplay on offer here feels loose, imprecise and strangely slow. This is the first VR game I’ve played that seems to suffer from some pretty serious input lag. When moving the guns around quickly there’s a real disconnect between where your hands are and where the guns are and you can literally see them wobbling into position when your hands are still for a second. There is also a very noticeable lag when you try to bring up your shields and I found myself more than a little annoyed on numerous times when I was convinced that I’d pressed the button to bring up the shield in time, only to find myself taking damage as the game didn’t react quickly enough to my input.

In terms of the core gameplay mechanics, I also found that some enemy fire was impossible to avoid and that at times the screen was so full of enemies and explosions that I completely lost track of what was going on. I also found that some of the pick-ups (such as slowing down time) didn’t work as expected and actually didn’t confer that much of an edge. These elements all combine to present a game that’s entertaining in small doses but pretty scrappy and with gameplay mechanics that feel undercooked. Unfortunately for Galactic Rangers, it just doesn’t compare well to Space Pirate Trainer in terms of that essential second to second gunplay. Space Pirate Trainer just feels so much more fluid and satisfying and its core mechanics have been distilled into such a pure gameplay loop that Galactic Rangers feels like a pretty limited imitation, which is a shame given its more dynamic and interesting environments. I kept thinking that if the developers had really polished the gameplay foundations laid down by Space Pirate Trainer, and created far more dynamic environments to fly through, this could have been a really fun arcade shooter. In reality though, whichever way you look at it, this is an outdated game that can’t really compete with the games that it so heavily iterates off. 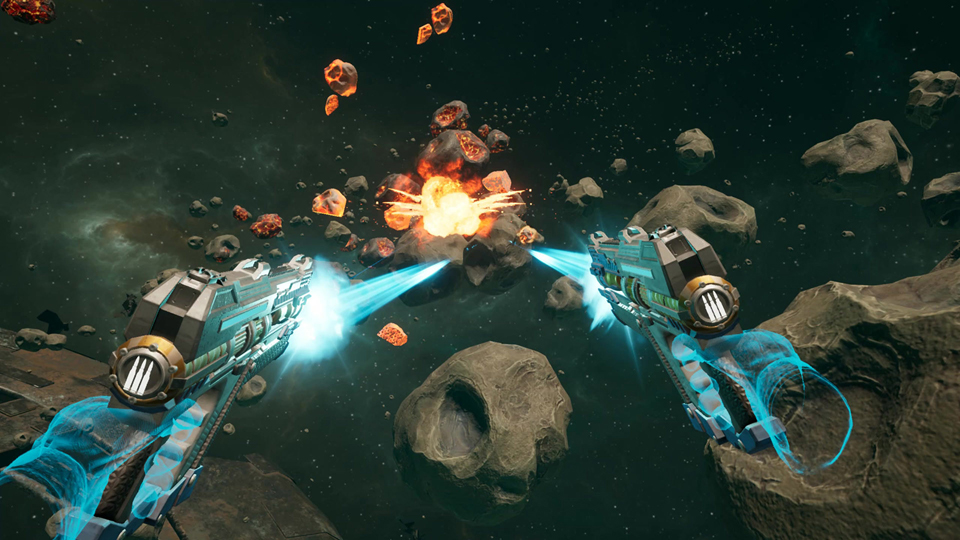 Graphically, Galactic Rangers also feels slightly behind the times. The levels are very detailed and there are some great visual moments– for example, I love how your guns transform for each new ammo type – but it all looks a bit soft and blurry and there are no in-game settings to improve anything. Explosions and general visual effects also look very flat and 2D in the headset and it was disappointing to see the frame rate took a huge hit when a lot was happening on the screen. I was pretty surprised at how poor the performance was on my 1080/Index set-up with some serious chug happening at key moments and being very distracting.

If this was 2016, and if Galactic Rangers had more content and more polish, then this could have been a real contender. Unfortunately, it’s 2020 and VR gaming has moved on considerably. More damningly, there’s nothing here that you won’t have seen done better elsewhere and the lack of polish in key areas, poorly implemented gameplay mechanics and lack of content result in it being a difficult one to recommend. If you’re relatively new to VR and crave a bit of space shooting then this might plug a gap, but there’s certainly more compelling options out there.

What would I expect to pay? The game costs £19.49 which is far too expensive considering the lack of content and lack of refinement in the core gameplay mechanics. For that price you can buy far better and more polished wave based shooters such as Space Pirate Trainer and Raw Data.

DGMA provided The VR Grid with a press code for this title and, regardless of this review, we thank them for that!