So after delving into the depths of VR for the last few months I’ve come to the realization that many people are unaware about what VR means in this day and age and what’s available to the masses.  With so many options out there I’ve decided my 1st video will be a help guide to hopefully assist any of you potential buyers into choosing which VR device is the best for you.

So last year at this time Samsung released a little device known as the Samsung Gear VR.  Currently sitting around $100 retail.  Assuming you have a compatible phone (Galaxy Note 5 and later) this is must have, especially if you are unsure about VR and are looking to see if it’s for you.  With plenty of apps and games as well as 360 videos, this device is a great introduction into VR with plenty of high quality content, though you will need a Bluetooth controller to experience all there is to offer.  Also it can play cardboard content as well once you download 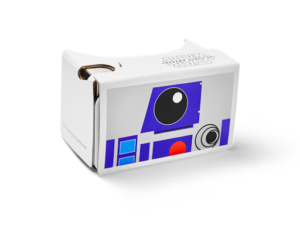 Even a cardboard headset can look sexy…plus you’ll be the coolest kid on the block too!!!

If that price point still has you on the fence than an even cheaper option would be a Cardboard headset.  Ranging in price from $10 to $50 depending on how much quality you want, with the cheaper ones actually being made of cardboard.  These headsets are compatible with any smartphone w/ a full sized screen.  They are a bit tougher to navigate, but with a little fooling around, you’ll get the hang of it.  The content available is more of the free variety so the quality of content you get from the gear VR is noticeably absent.  But with the ability to view 360 videos on you tube and play games, if you are looking to see what VR has to offer and are on a tight budget than this may be your ideal purchase.

There are currently 2 VR headsets available for PC, The Occulus Rift and the HTC Vive.  Both of these HMD’s (or head mounted displays) offer higher end VR experiences.  They are also on the more expensive side ($800 and $1200) respectively and require a high end PC as well (at least $1200, but probably more than that.  On top of that, the Vive requires a whole room for space as well, as it tracks your movement using mounted sensors.  With price should come quality, but with the lack of Large 3rd party developers, many games on these HMD’s feel more like demo’s than full experiences.  I’ll stop the PC stuff here as, if you are considering these as options, you probably know more than what I’m offering in this vid anyways.

Your last option is the PlayStation VR but it’s not available just yet.  In a little less than a month (Oct 13th to be exact) Sony releases their VR system for the PlayStation 4.  Priced @ $600 in America for the bundle containing all the peripherals you will need minus a PS4, this, in my opinion, is VR’s best chance at mainstream popularity.  With an install base of 20+ million PS4 owners, this device will be the focus for many 3rd party developers and with that will come AAA, already coming are titles like Call of Duty, Resident Evil and Fallout 4 with many more on the horizon.  More than likely many of these games will be ported to VR’s PC counterparts and that may be a factor in your choosing.  Still, if you don’t own a PS4 (like myself) than PS4 VR will run you around $1000 or more depending on which model of PS4 you pick up.

In closing, if you’ve never experienced VR before, purchase a cardboard headset, right now!  They are cheap and work with almost any smart phone, you’ll be amazed. Just read the details before you commit to buy. I highly recommend the Samsung Gear VR headset, but with its limited phone compatibility this may not be an option for you.  PC VR to me is not worth the cost of admission at this point with a very heavy price point and not a lot of great content.  That said, I expect the quality of content to improve dramatically within the next year or so.  So that leaves PS4, It’s the middle ground and still on the expensive side and unreleased, but it will attract top tier games and experiences and may just be worth that extra cash.  I suppose we will find out in less than month.  If you like what I’m doing, follow and subscribe to my stuff!