So after immersing myself in VR for that last few months I have begun to notice disturbing trends in VR games.  With that said this will be my top trends in VR gaming that are driving me insane.  My next list will be the things I love about VR gaming and experiences so it’s not all about the hate, but I feel like these issues need to be addressed for VR gaming to be improved.

In no particular order….

So many games tout immersion as one their standout points but fail to deliver on key factors that apply to that word. Mainly story and purpose. Many VR games simply throw you into the game right away telling you to save the day and that’s it.  Part of immersing someone into a game is giving them a reason to do whatever it is they are supposed to do, but developers seem to think once you are in a VR game, that’s enough and it’s infuriating.  And it’s such an easily avoidable problem; by simply including an opening video or interspersing short simple cut scenes this could easily be accomplished.  Games like Herobound: Spirit Champion or even Space Stalker utilize simple story telling mechanics to give you a purpose. 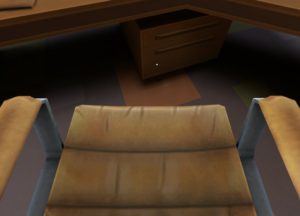 So many games forget to tell you that you are playing as the invisible man!

AGHHHH… I can’t for the life of me figure out why so many First Person games fail to throw a body where one is supposed to be.  I get this being harder in full motion shooters, but in cockpit shooter games why can I look down and see my seat.  I don’t need a full moving body or anything to technical, just let me look down and help me feel like I’m in sitting there! I recently played games like Space Stalker and Eve Valkyrie, and while not phenomenal games, not only can you see your body, but occasional animations make you feel like you are there.  Putting you in a virtual world without body always seems like a misstep to me, especially when so many mediocre games pull it off while better games don’t feel the need too.

So you like donuts eh? How about all the donuts in the world?!?!

With VR exploding in popularity and it seems like everyone is jumping on that ship (myself included!).  That doesn’t mean we need to consume or pay for all the content out there.  Some VR experiences feel like money grabs.  Take Wrath of Loki or Escape from Bunker 14.  Both are a few bucks and both offer terrible experiences.  While EFB14 tries to be a VR game, terrible gameplay, simple puzzles and lacklustre visuals ruin any fun to be had.  WoL is a ‘find the item’ experience that had you spinning in circles to find objects and completely forgets that games are supposed to fun.  SONAR, a short movie $2 movie barely starts before it’s over.  With so much free, better content out there, it’s too bad some money grubbing dev studios are shovelling out trash for a quick buck as opposed to actually trying to make a decent game.

This goes to my 1st point a bit, but so many games offer very limited replayability.  Most VR games offer short experiences(less than an hour) and offer no real reason to go back.  No achievements to speak of in Gear VR games and easily achievable ones in the PS4. Not every game needs to have a tonne of replayability, but when a game like Arkham VR has about one hour of gameplay for $30, with not a lot of reason to revisit it once completed, I feel slighted.  VR is still in its infant stages but it seems like game developers are of a less is more mentality, and that doesn’t make for great VR gaming, but rather simple, short, 1 mechanic experiences that wear out their welcome before the 1st playthrough.

That’s a whole lot of moolah!!!

All these points lead to me to my final one; Dollar value.  With prices on the Gear/Cardboard Headsets ranging from $1 to $15 with the some of those games offering as little as 20 minutes playtime before you are done, it feels like there is a lot of cash grabbing going on.  Similar to the PS4 with “full” game experiences ranging from $25 to $80 and even beyond that.  Eve Valkyrie is $80 plus there is a bunch of DLC in the store increasing that price by double, for a pretty bare bones space shooter. It looks great and plays well too, but the asking price, like many VR games seems high.  Some developers seem to feel that throwing any game into VR automatically inflates the price while reducing content and that doesn’t seem right.

Like any console at launch time, missteps will happen and I am viewing all the VR headsets and experiences as one console.  This is a medium that has yet to be picked up by the majority of people.  We may be getting inundated with VR content but a lack of sales on all platforms show that people are still wary, and for the reasons I listed, they may be justified….than again…….

Next Column: My top praises for VR

How Important is PSVR to the VR Industry
October 2, 2016