This review has been updated to include the release of the Quest version of this game and any changes it brings with it.

Classic 3D platformers in VR are rare.  Sure, we have had games like Lucky’s Tale, Astrobot: Rescue Mission and even Trover Saves the Universe, all which highlight the strengths of the genre in VR.   Even including the smaller, lesser-known similar titles available, this genre remains largely vacant with only a handful of titles available across our various headsets.  Ven VR Adventure, released last year for PC headsets, is the latest title to tackle classic 3D platforming action that has you controlling the titular character as he tries to save his planet and its inhabitants from an unknown and powerful enemy. 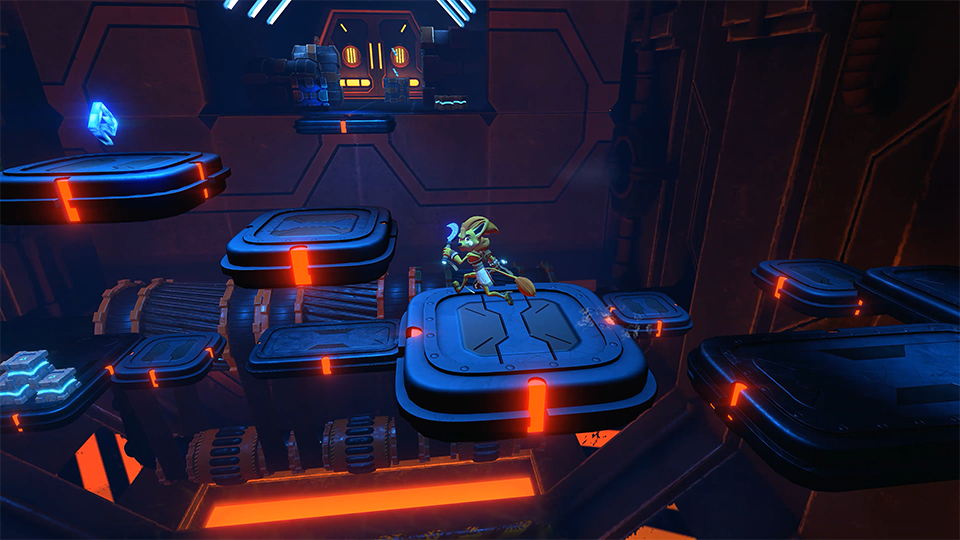 You know what to do.

If you have ever played any 3D platformer ever in your life than you will be instantly familiar most of the controls in here.  The campaign is broken up into 3 different areas of the planet, each with 4 individual stages.  Ven must navigate each level in semi-linear fashion as the stages move forward with him.  You are the camera and thanks to the wonders of VR, you can look around the environment and have the option of toggling click turn on or off if you don’t want to spin around in your chair or on the spot if you play standing though if you play with the turn option on and still turn in real life, you’ll often see your in-game chair as you are also a character in the game though you can remove it in the options menu.  As a space traveller who stumbles across Ven, you can interact with him by touching him whereupon he will acknowledge your presence by shifting out of the way.  Later on, you get ‘deafening grenades’ which let YOU toss concussive balls to aid Ven against select opponents. VEN is armed with 2 blades to attack enemies as well as a jump and double jump ability which, when combined with the attack, triggers a super attack that almost no enemy can defend against.  Throughout each stage are runes to collect that may appear ahead of you or be in boxes scattered around the environment. Also hidden in each stage are 10 “EKI”, little fox-like creatures of the same species as VEN that, when all found unlock the bonus stages.  It’s impossible not to compare this Astrobot as this was a key element in the game and supplies some of the replay value as many of the runes or creatures missed are highlighted at a stages conclusion and subsequent plays will not have the already found EKI in that stage.  The last replay factor in here is that each mission hasa ‘time trial’ mode with the game keeping track of your best time by placing your score on the local and online leader boards. 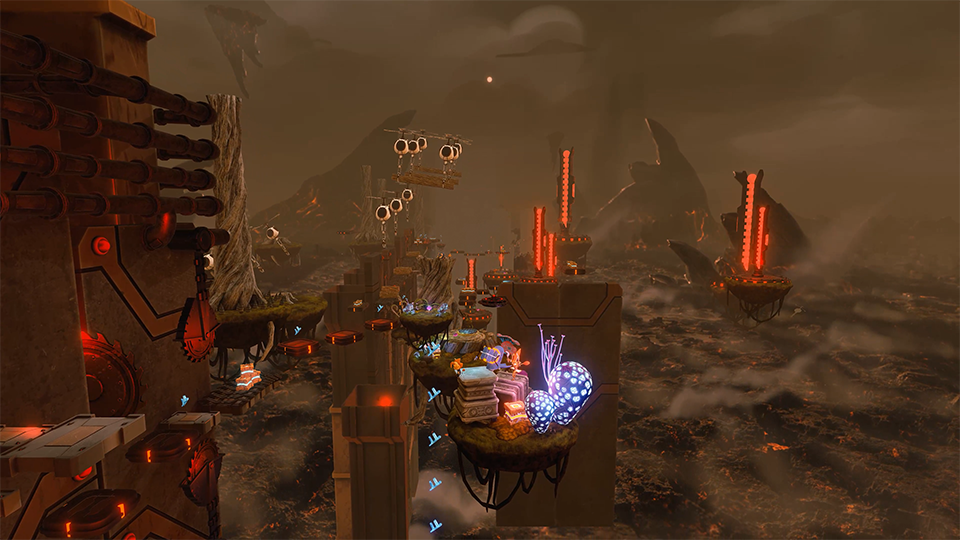 The backgrounds don’t look quite as good in the headset.

VEN’s 1st Impressions are very positive with a cinematic cutscene highlighting the story up to your arrival showcased in narrated still images.  The HUB area in this game is your spaceship which lets you choose the stage via an onboard menu.  Each stage has its own unique theme from jungles to rope bridges, industrial factories and many more.  The stages populated with platforms do a much better job of hiding the 2D low resolution background image that surrounds each stage. It’s easy enough not to notice these far away visuals, but some of the stages are comprised of many moving platforms and islands, showcasing that 360 wallpaper and while those images are mildly impressive, when juxtaposed with the much more higher resolution graphics, just don’t look very good.  The stages can look anywhere from fantastic to lacklustre though with successive stages adding in new platforming elements and enemies there is almost always something new around the next corner to take in.  Those enemies come in many forms from a variety of robots, angry frogs, some sort of mushroom creatures and a host more, each behaving in their own unique way. Thanks to VR you can look around wherever you want and the fixed placement of your head is used to give the player some fun views of the action as you could be controlling VEN from way below him or from up on high.  What is surprising is how much better the Quest version looks compared to PC.  Colors have been enhanced to make the game look much more vibrant, dynamic lighting effects and shadows replace the static lighting effect from last years release and even the texture quality looks increased and when compared side by side, these enhancements are very noticeable.  They aren’t perfect as the mix between static and dynamic shadows can cause some section to have shadows floating where they shouldn’t, but that’s minor as the game does currently look better on the Quest than on any other headset. One minor note would be that the Quest version has some background assets removed making some stages look a little emptier, but that’s really only noticeable in side by side comparisons. 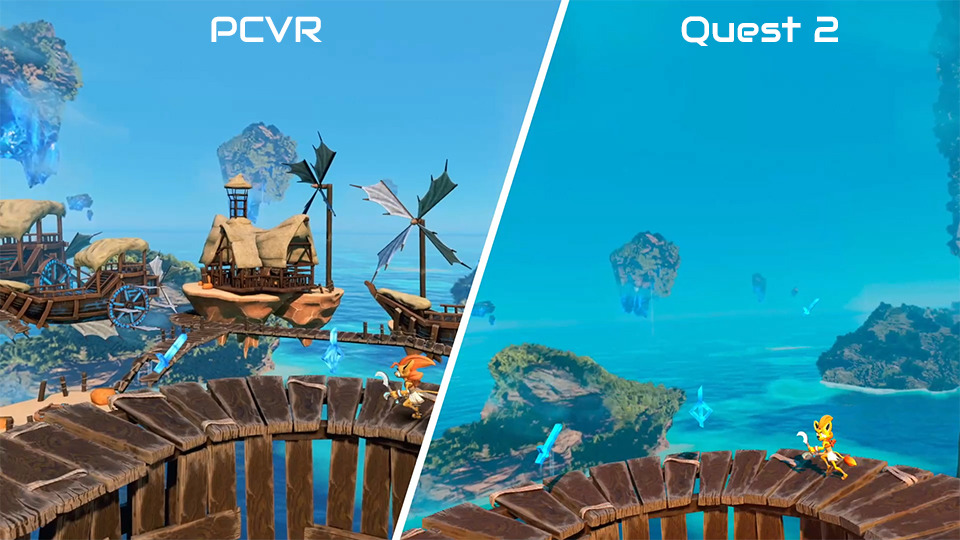 Removed assets on the Quest, but the Quest version does have dynamic lighting.

Lining up with the mixed quality visuals is the audio presentation which shines with its soundtrack but comes up very short with audio effects.  Attacks make appropriate noises, but VEN and all the creatures and effects are just way too silent.  The little EKI hidden around the map are completely silent and VEN doesn’t do much beyond making some ‘hup, hup’ noises when he jumps, or attacks and I would’ve loved to have seen a little more personality injected into this game.  The soundtrack is excellent but with stages taking upwards of 30 minutes or more to get through if you are trying find and kill everything, the songs just play themselves out and get old.  The sound design is solid but feels like it could be more refined. 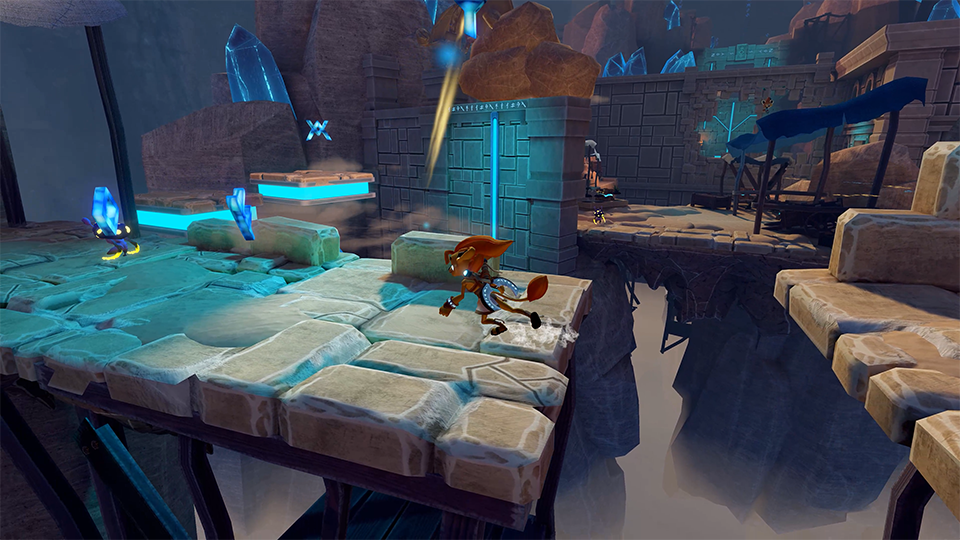 VEN, for all intents and purposes, is essentially a clone of ASTROBOT Rescue Mission and while that is largely a compliment, it is missing the charm and personality of that flagship VR title.  The level design is solid, and the speed run times show that they can’t be navigated in less then 10 minutes each, but I think for the average player, each one will take much longer giving me a feeling like VEN just didn’t know where to stop.  The latter half of the game introduces new obstacles, but the 1st half really started to feel like I was doing the same thing over and over, just with a new coat of paint around me.  The checkpoint system is still erratic with points sometimes being super close to each while other might have you replaying your last few minutes of gameplay as you try and run VEN through a larger section of obstacles.  Deaths can often feel unfair with the platforming being solid, but sometimes those quirky viewing angles make it hard to tell exactly where VEN is in relation to the next platform and on more then a few occasions I fell to my death because I missed a jump I should have easily made.  This is highlighted in the rope bridge level which had me rage quitting at so many accidental deaths I had to walk away from the game and regain my composure.  Still, despite my frustrations nothing in here is inherently broken and trial and error got me through every stage and when it works it great fun…but when it doesn’t it can maddening as deaths by falling and from some enemy types just come off as cheap.  With 12 stages and some bonus content there is a lot of game to get through which is great, but the way it is laid out makes revisiting these stages a daunting task as any missed EKI or symbols may require you to navigate most of the stage again just to find them. 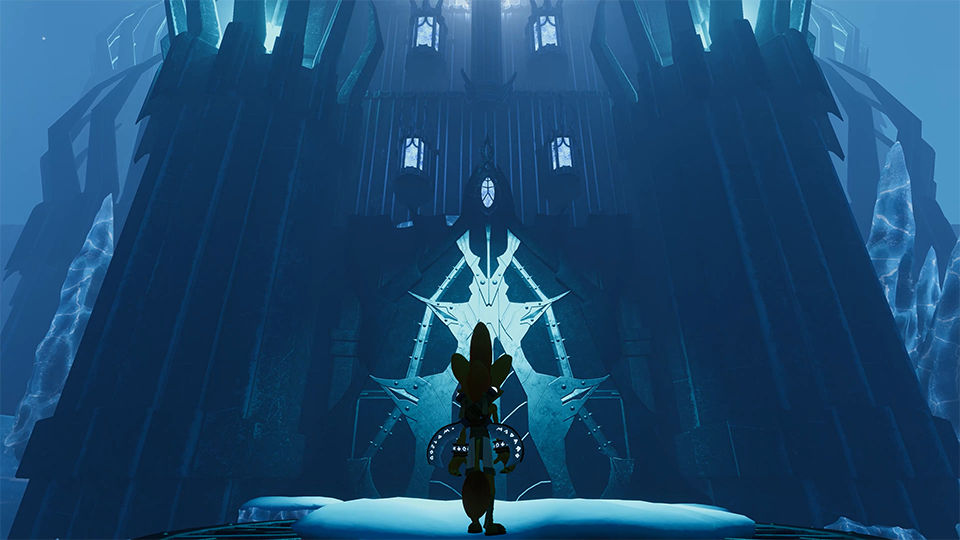 I enjoyed VEN back when I played it on PC and it’s gotten better since than with the Quest version feeling a little more refined and looking noticeably improved.  It checks off all the right boxes for a competent VR platformer but can feel repetitious thanks to the lacking story and similarity between stages.  It’s good where it needs to be and those looking for their next platformer in VR should probably pick this up, just temper expectations a little and maybe play in smaller doses just to keep the game feeling a fresh a little longer.

What would I pay?  This is $30 US which I think may be a tad high for what’s here, but if you are looking for a 3D VR platformer, VEN still delivers the goods where it counts and I suspect anyone who buys this won’t regret the purchase.

Monologic Games provided The VR Grid with a press code for this title and, regardless of this review, we thank them for that!