If I ever found myself trapped in a room that required me to solve a puzzle to escape into another room with another puzzle, I would die. This is assuming I had not eaten in the last four hours or so. Lucky for me, the fine folks at VinLia Games have given me a way to practice and hone my escape room skills, and, they even let me bring a friend.

Here you will find yourself in various escape room situations that will require you to manipulate the environment around you to progress to the next level. In the single player mode, you will achieve this or fail miserably, through use of your Vive controllers and by physically walking around. In co-op mode, the second player will use your desktop to control a little robot buddy that will help you along the way making this game an engaging experience for both players. Just remember to have player two sit outside of striking distance as this game utilizes all of the 2m x 2m play area. 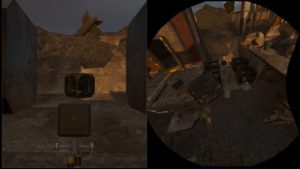 While the single player game mode was indeed fun, consisting of three moderately difficult levels, it does pale in comparison to the co-op gameplay. This isn’t meant to diminish the enjoyment of the single player mode, but to emphasize the value that the mechanic of having to rely on another player brings to the game. Thankfully Eye in the Sky gives the players the tools they need to assist communication in-game. Seriously, the ability to highlight and point the little lasers at objects as you discuss your plan of attack goes a long way so don’t think of this feature as just robot dance party lights.  Throughout the nine co-op environments, you will come to find that everything you can do to communicate better with your partner will make your escape a lot smoother.

Your tools in this game are fairly object oriented.  The Vive player will use the two controllers to pick up objects such as blocks or debris, to highlight objects, and point at areas as mentioned above. The desktop player will use the keyboard and mouse to drive the little robot around, jump and push objects.  Given that most areas have a limited number of objects, which are often needed to solve the puzzles, having them scooted back within reach is something you will grow accustomed to. This brings me to my first real gripe with the single player mode.

The game’s environments utilize the 2m x 2m space for the Vive user but you cannot move that space in any direction. Your controllers will short out if you stick them beyond the gridded area.  Everything you need will be in that space for the single player mode, and in the co-op mode the second player will move items into that space for you. Unfortunately, in the single player game mode I found that I kept managing to push items outside of my reach, foolishly mind you, but if there’s a way to do this the player will inevitably do so. While it was my foolish actions that pushed the items out of reach, having a quick reset option that doesn’t require me to remove my headset would be a welcomed improvement.

The environments themselves look wonderful, in fact, all the game’s graphics look great. There are a few clipping issues here and there and the game did allow me to exploit this to some degree, but this is an early access game and such issues will hopefully be addressed. The look and feel of the world did a great job of creating a post-apocalyptic feel and more importantly the designers didn’t push puzzle solving clues with the graphics which was nice. No one likes handholding in puzzle games after all and there’s nothing worse than an item or area that stands out like a sore thumb because it doesn’t match the rest of the game’s aesthetics. The audio was fair with all the sounds you would expect as you zap and toss around drums and blocks or activate lifts. It could use some background ambiance however, just for effect. The game’s music was adequately ominous and not overly annoying.

While I might not be the best at escape rooms and puzzle solving or communication with other humans, I did find this game to be enjoyable as a co-op game. The single player was okay but felt way less complex and involved than the co-op, but still enjoyable. Aside from a few graphical glitches here and there, the game was very smooth for an early access title and shows a great deal of promise.  I would love to see a bit more story revealed through the gameplay as you progress. The how, why and to what end are never really covered, and a strong story element could make it absolutely amazing. 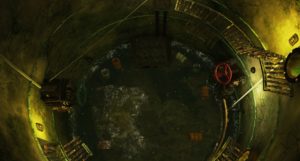 I had a great deal of fun yelling and getting yelled at in the co-op mode and even found some of the single player mode challenging in this game. The gameplay is solid and the world is beautifully rendered but the lack of story is somewhat concerning. The replayability is also another issue as with any puzzle oriented game but thankfully the developers have promised more content down the road.  In it’s current state, I have no problem recommending Eye in the Sky to all you wonderful readers.

What would I pay? Currently the games asking price is $14.99 and I find this to be a very reasonable price. If this game ever implemented a heavy story element, I would even be willing to pay a small amount for future chapters, provided they are engaging enough. If escape rooms and puzzle solving is your thing, go get your player two and enjoy!

VinLia Games provided theVRgrid with a review copy for this game and, regardless of our score, we thank them for that!