This review has been updated to reflect both the PSVR and PCVR control types on May 12, 2020.

Pixel Ripped 1995 is the sequel to 2018’s Pixel Ripped 1989 which once again puts you back in the role of Dot, a digital heroine who thwarted the evil Cyblin Lord’s diabolical efforts as he attacked both the real and gaming worlds.  That game saw you interacting with the real world around you while holding a portable gaming device and merged both of those into a meta, nostalgia filled romp that paid homage to classic 80’s gaming but still felt very modern thanks to VR.  Flash forward to 1995 and the Cyblin Lord is back and thanks to advances in technology, 1995 doubles down on retro gameplay while still pushing this franchise forward. 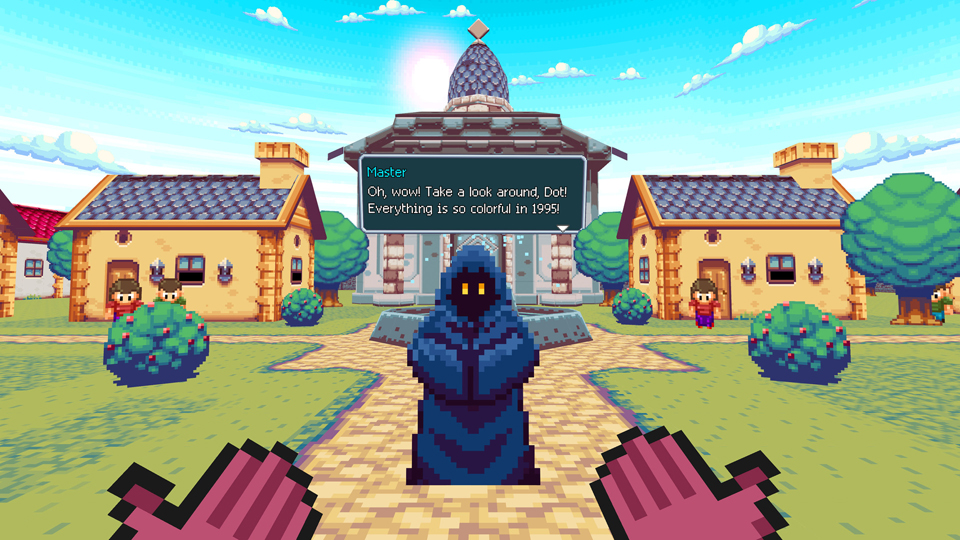 On the PC side you actually have 2 controller options with the 1st being your standard tracked motion controllers.  With those, each hand is free to move around though with a bulk of this game still being side-scrolling action with a gamepad in your (virtual) hand, you’ll more often then not have your controllers together in front of you, simulating a classic console controller.  Like in 1989, you’ll have to interact with the world around you, initially distracting your mother from stopping your gaming sessions by creating diversions with a nearby dart gun.  As your hands are virtual, in order to hold the gamepad they sort of stick to it in game so to reach for an nearby object, you’ll have to pull that hand away while keeping the gamepad centered.  If you move the gamepad too far in one direction, the game might think you are trying to move the opposite hand you are intending.  It’s not a large concern, but it was one that popped up throughout my time in the campaign.  That second method is the use of a gamepad which works surprisingly well but does hamper some of the more immersive moments as any interactions beyond using a game pad are handled by trigger presses and gazing at the objects you wish to touch or hit so while it is more comfortable having an actual gamepad in your hands, this mode does underutilize the VR interactions a fair bit.  Still, either method plays just fine once you get used to it and it won’t take too long before you are too focused on what the game throws at you next to be concerned with anything else.

On the PS side you have to use the DS4 which makes sense as a bulk of this game is platforming which at the very least needs a D-pad or thumbstick, either of which the Moves lack.  What is interesting is that, like in 1989, you’ll have to interact with the world around you though this title moves beyond just using head tracking to due so.  Now, while the holding a controller, pressing the triggers will release your left or right hand, allowing you to use that free arm to grab nearby items such as a dart gun or other errant objects.  It’s an interesting mechanic that I can’t recall being used in any game prior and while it can be a little awkward at first using your tracked DS4 to move 1 arm while the other still holds the controller, which both of your real-world hands are doing,  it simulates the freedom of having 2 VR hands quite nicely and allows you to still control the game while fending off whatever the Cyblin Lord is throwing your way.  Other more dynamic actions are required the further you get in the campaign like having to toss items with a free hand while still controlling Dot in a game or flying a starship mapped to the DS4’s tracking and position making for a fun, sometimes frustrating dynamic as you bounce back and forth between worlds though the controls become second nature soon enough. 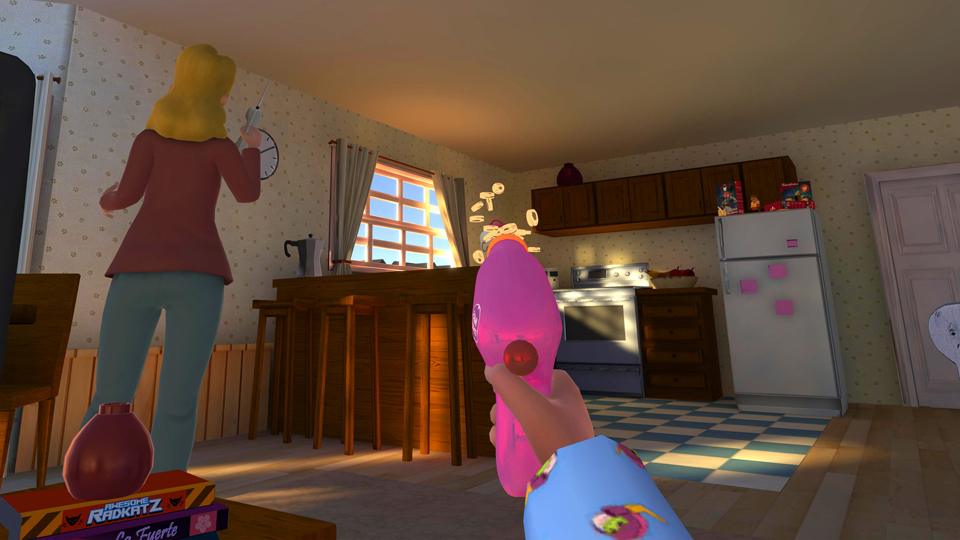 You’ll have to interact with the world around you to keep gaming!

Where 1989 was inspired by 8-bit gaming, 1995 is focused on the 16-bit side of things with some dabbling in 32-bit games as well.  What that means is that, compared to the original title, everything in here just looks better.  The sprites you meet, the enemies you face and the various gaming worlds you encounter all feel ripped (heh, heh) right from SNES and Genesis games of old and that’s not even accounting for the nostalgia factor, which I think is even higher here then in 1989.  Right away you are cast into a Zelda inspired Top Down Action RPG before heading out to your local rental store where you need to jump between a Sonic inspired platformer and a side-scrolling shooter reminiscent of Metroid.  Where things get fun is when worlds collide, and the game breaks out of the console or cabinet and happens in your living room or whatever setting you find yourself in.  Playing through a Final Fight clone in an arcade while having to shoot the Cyblin Lord as he comes out of nearby machines to attack the players or having to stop a monstrous Mad Max 16 bit vehicle that is chasing your real world car down the road is ridiculous fun.  Speaking of the real world, it has been vastly improved over the original game which had some middling and sometimes ugly looking character models.  This time around, everything is a bit more cartoonish, but carries much more polish and while some of the models move a little stiffly, compared to the 1st game it’s a substantial improvement. You’ll also visit many more environments and games then in 1989, making this game feel larger and much more fluid then the 1st. 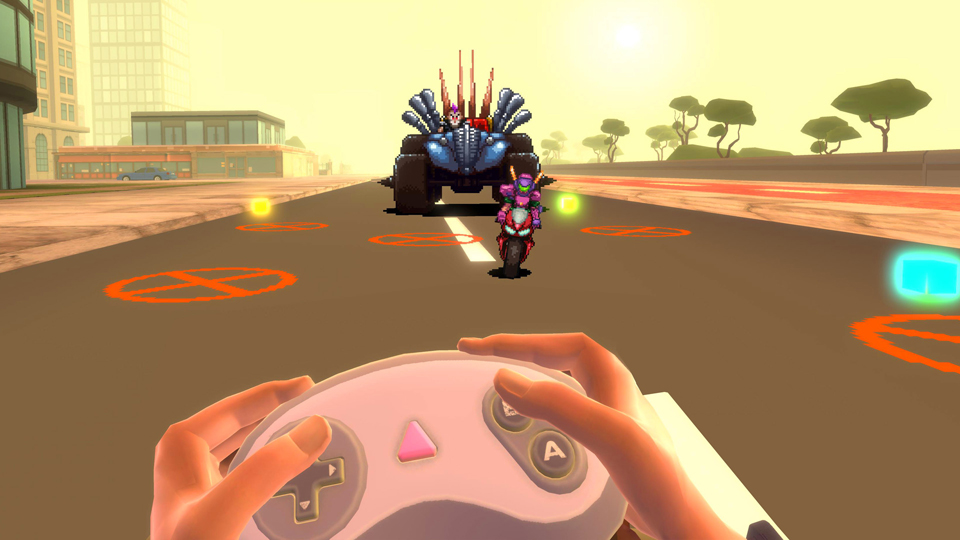 As this is ultimately a retro game, sound effects are right out of the 90’s offering some familiar sounding midi type songs as well as matching 16-bit sound effects that are pretty much on point no matter which game you are playing.  Outside of the games, all the people around you are fully voiced and talk to you throughout the storied campaign.  The voice acting is solid whether it’s your overly cautious mother who’s worried about gaming’s effects on your overall health or the annoying kid who constantly makes fun of every thing around him, and you, while not understanding why no one likes him.  Everything presentation-wise comes together to make for a game that charming more then anything else. 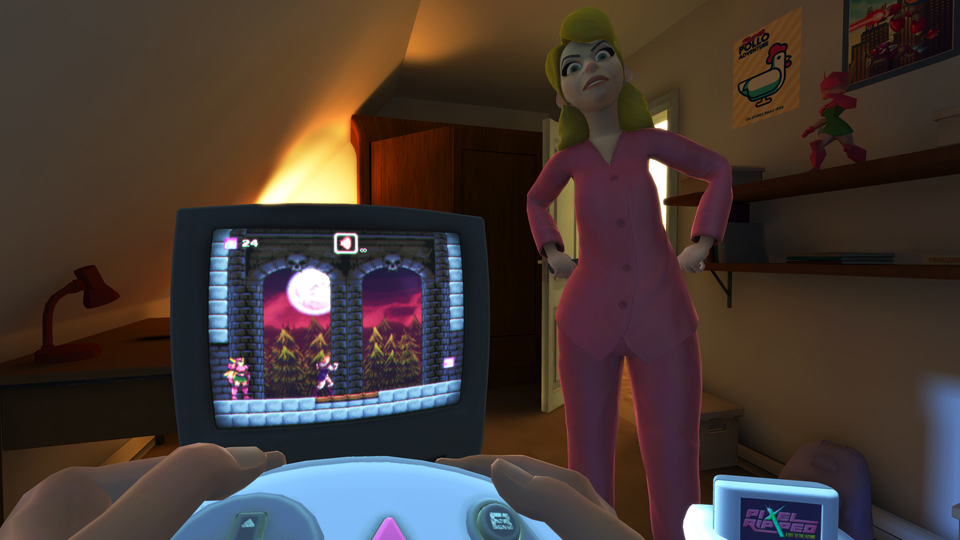 Your mom means well, but she can be a drag sometimes!

1995 is pretty much larger than 1989 and while most of that is great, there are still a few minor issues that pop-up, some of which remain from the 1st title.  Those bits where you need to cause distractions to prevent an adult from shutting down your system are still here though are now only in 2 of the 6 stages.  The first stage where your mother is busy and keeps getting distracted, sometimes by you and sometimes by something else, was alright, but the 2nd stage where you need to play through the Castlevania-type level without making too much in-game noise lest your mother wake up was sort of a drag.  She just woke up a lot and while it’s relatively easy to be quiet again and make her think it was a dream, it just broke up the playing the game into to small of chunks and even though the amount of dialogue in this scene is decent, I still heard the same lines more then a few times.   As this takes place in a very important year in gaming, the final stage is a 3D platformer reminiscent of the 1st Crash Bandicoot game and feels a little under-cooked.  It’s a relatively proper representation of 3D platformers at that time, complete with awkward camera angles, frame drops and janky controls and even though I appreciated how faithful that stage was to that years technology, it was by far my least favorite stage in the game because of those choices.  Still, the pros in this one far outweigh the cons and for every slight hiccup this game has, it has 10x as many awesome ‘oh wow’ moments. 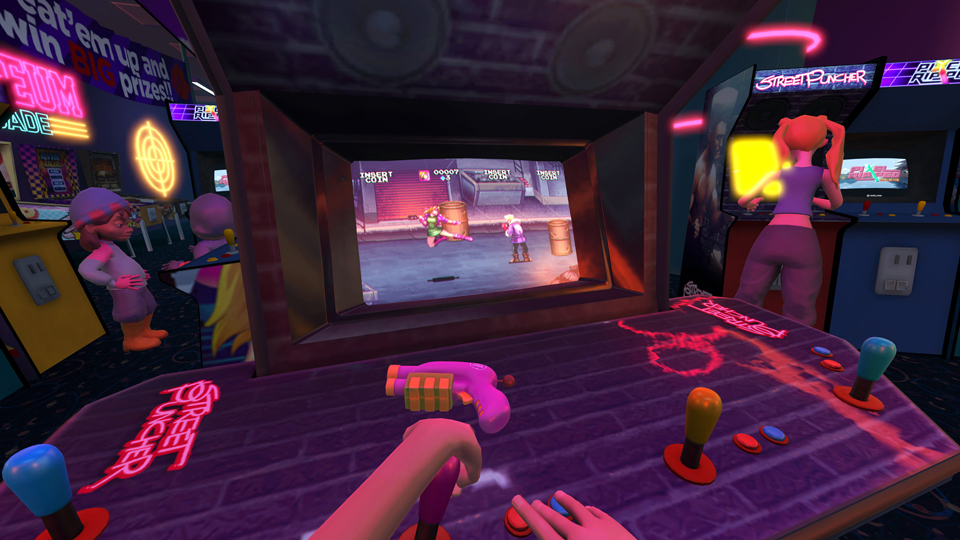 There’s more nostalgia in here then you can shake a stick at!

Pixel Ripped 1995 is pretty much the sequel 1989 deserves and delivers in almost every way I expected.  It is awesome to see the leap from 8 to 16-bit and beyond, and the nostalgia factor combined with the solid retro gameplay is great fun.  The campaign won’t take more then 3 hours to get through and it’s a fantastic 3 hours loaded familiar gameplay and some fantastic surprises.  There is also a fair bit of Easter eggs in here as well that will require thorough searching of a few of of the stages which does add some additional replay value.  If you enjoyed the first one, I guarantee you’ll like this one just as much, if not more, and if you’ve never played this franchise, then get on it because there is nothing else like Pixel Ripped, in or out of VR.

What would I pay?  This is $20 US and worth every penny.  It is refreshing to play something so unique, yet so familiar and I’m looking forward to seeing where this series is heading!

Arvore Immersive Experiences provided The VR Grid with a press code for this title and, regardless of this review, we thank them for that!