As I said Among Us is, or I guess was, kind of a big deal and while it may be waning in popularity compared to its peak days 2 years ago, it’s become a fairly recognized name in gaming so when it was said to be coming to VR headsets, I was excited.  Not so much for the game per se, but rather for the attention such a popular game would garner once it hit our headsets.  I dabbled in the flat version a bit, enjoyed it for what it was, but quickly cast it aside as I found the overall experience to be enjoyable, but forgettable.  That said, my interest was piqued in how this would translate to our HMD’s as the social aspects that made it so popular in the first place could only be better in VR…right? 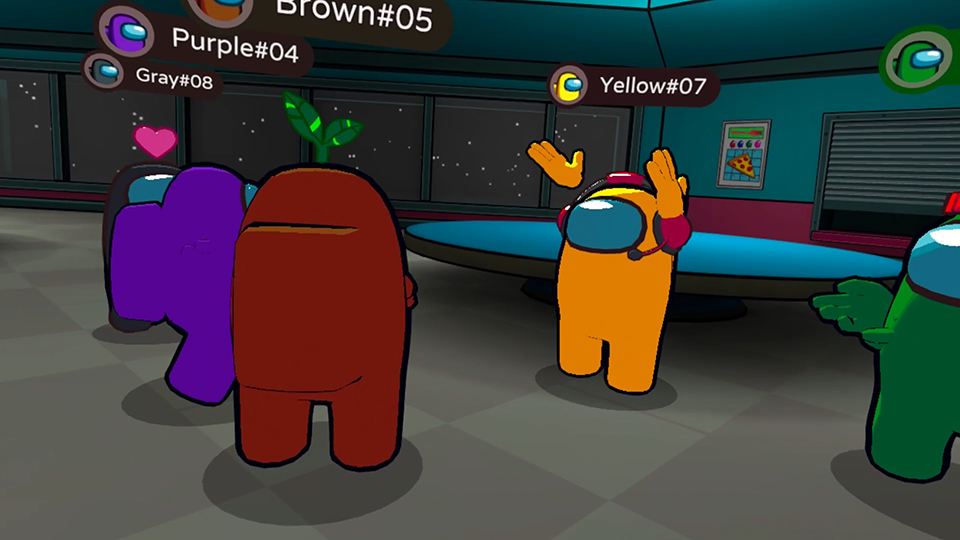 Being in the game is just…better!

There isn’t much of a story here, but for those that have played Mafia or watched the Thing, the premise will be familiar.  This is an online only game where you play as a member of the crew on a ship called the Skeld 2 and, depending upon how many people join the game up (a max of 10), 1 or 2 of the crew may be imposters, who are out to sabotage the ship and kill the crew.  It’s up to you as a crewmate to finish assigned tasks while weeding out who the murderers are and should either of those acts be completed, the crew wins the game.  Playing as the imposter offers a totally different mission as they will need to sabotage the ship & kill as many of the crew as possible without revealing their true identity using a few abilities unique to them.   You can choose either quick match, to host a match or direct join which will require a room code to get in with servers spread around the world you can choose from as well.  I will note that the flat game has seen some recent updates that added new character classes for the crewmates as well as up to 15 players with those additions being absent in the VR game, hearkening back to the original 2018 release. 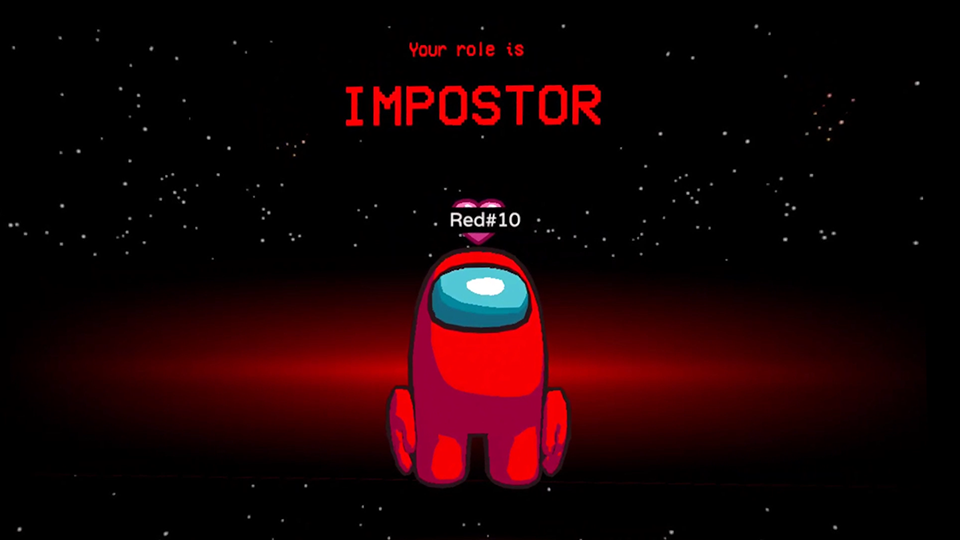 Whenever you are the imposter, it’s just a little more exciting.

The largest difference between this and the original is how you control the crew with the VR version putting you inside the space suit and in first person mode.  You of course have 2-hands and can navigate around the ship using standard first-person controls with optional blinders & smooth or click-turning being available for those that need some additional comfort options.  Teleporting is not available here though running around the ship appears to be at near the exact same speed as the flat game making this feel like faithful port to VR and given that slower pace, shouldn’t cause much comfort issue.   Whether you play as an imposter or a crew mate, the controls are largely the same though the imposters have a few more abilities such as sabotaging rooms & doors or crawling into vents to quickly move about the ship. The default option for these interactions is by pressing a face button while pointing at what you want to interact with whether it’s on the pop-up mini-map, an object or crew mate right in front of you, the latter of which will result in murder with a 45 second timer popping up that must count down before you can kill again.   That same interaction is applied to the crewmates, who’s tasks consist of a variety of simple mini games that are as easy as pulling a lever to much more complicated ones like a ‘Simon Says’ type button puzzle, timed switches, knobs to be slowly turned, navigation of the ship along a 2D plane and a few more.  It’s was a little bit odd at first to not touch some buttons and instead use a laser pointer from your hands to highlight and hit them while handles need to be physically grabbed but when I switched to removing the hand laser, I found pressing those buttons to be a little slower and went back to the default mode as, once I figured out how each game is meant to be solved, I quickly forgot about any annoyances and focused on the tasks at hand.  It also makes for a system that might seem slightly less immersive on the surface but allows for subterfuge as each player can’t really see what the other is doing and must either trust that your fellows are completing their tasks or lying about them, adding layers to the possible deception. 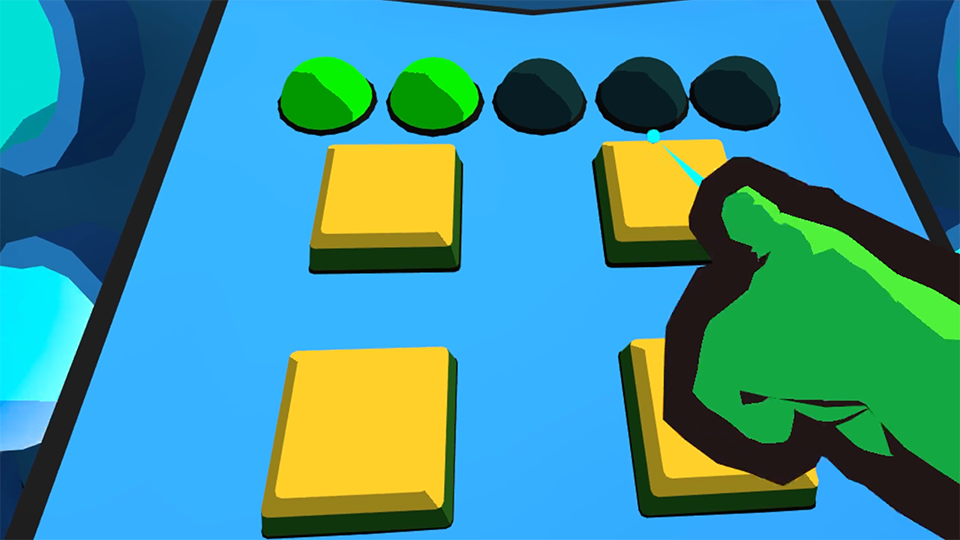 There a a variety of tasks you need to perform.

Should the Imposter successfully kill someone, and that body is discovered OR if a crewmate decides to call an emergency meeting, everyone will meet in the cafeteria to discuss and possibly vote out who the majority thinks may be an imposter.  If there isn’t a majority vote or people opt to skip the vote, no one is ejected from the game and everyone must go back to their assigned roles.   Now, should you be killed, no matter if you are an imposter or crewmate, you remain in the game as a ghost and can still complete tasks or commit acts of sabotage to aid you living teammates, though you can only talk to those who have also been killed, which is a great way to keep everyone involved until the game’s conclusion.  It’s in these meetings where chaos unfolds, and people need to decide who they think may be an imposter based only upon what you have seen and what others tell you. It very much reminded me of Werewolves Within, especially when players are good at lying, deflecting blame upon others causing the crew to possibly vote out their own teammates.  It’s intense & fun to be in either role, especially as numbers dwindle and fingers are quite literally pointed at one another.  I will note that in my play, having 6 to 10 players made for some riveting games and ‘the more’ is definitely ‘the merrier’ here as any less than 6 makes most games too easy to root out the bad guys, though as I played this pre-release, I don’t expect this too be too much of an issue given the popularity of the license and cross platform support. 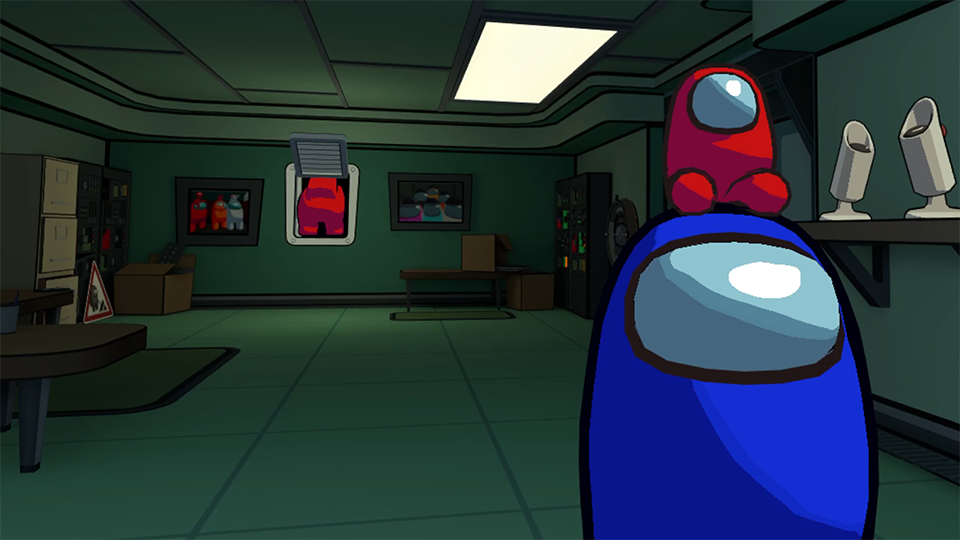 Always pay attention to everyone around you!

The art style of the original has been translated to VR to near perfection and regardless of whether you play this on PC or Quest, the only noticeable difference I found was a more sustained frame rate on the PC side of things.  What is cool is that Skeld ship from the flat game has been translated to VR to near perfection and I think people familiar with Among Us will take joy in being able to now walk the corridors themselves.  For those looking for the next VR showpiece, this is not that, with Among Us utilizing very simple textures and color palettes that make almost everything in here look fairly simple.  Among Us has really never been about presentation as it’s all about keeping an eye on everyone around so it’s an example of less is more and given that the entire game is made to look like a cartoon, what’s here still looks super sharp in the headset, and I never took offence to the art style.  Each of the crew is cell shaded giving them some dynamic flare as they move about the ship and almost hop around performing their individual missions. Arms float ahead of everyone though outside of that, everybody looks the same save for the color of their player, the name floating above their head and whatever they choose to wear from nothing to a cap, bandana, mohawk and a few other option with 1 DLC pack available at launch for those that want that extra little bit of flair.

As far as the audio side of things goes, this is a bare-bones affair as, while playing the game you are left in relative silence save for the ominous sounds of the ship as it drifts through space and the sound effects attributed to each room.  It’s a smart choice as not only does it add some realism to the game but also some extra intensity giving some light Alien vibes in regard to just how isolating this can be at times.  Depending upon where you are in the ship you may hear the wrrrrrr of the engines, the beeps and boops from a nearby console, doors whooshing open or closed or the footsteps of someone nearby so while effects may be minimal, they are used to great effect.  What is on point is the in-game proximity chat that allows you to hear others close by which is great when talking with one or two people and is entertaining as all heck when 10 crewmates are accusing each other of things they did or didn’t do while others lie and everyone points fingers at each other and it’s nothing short of that insane fun that makes this version of Among us, in my opinion, the superior one. 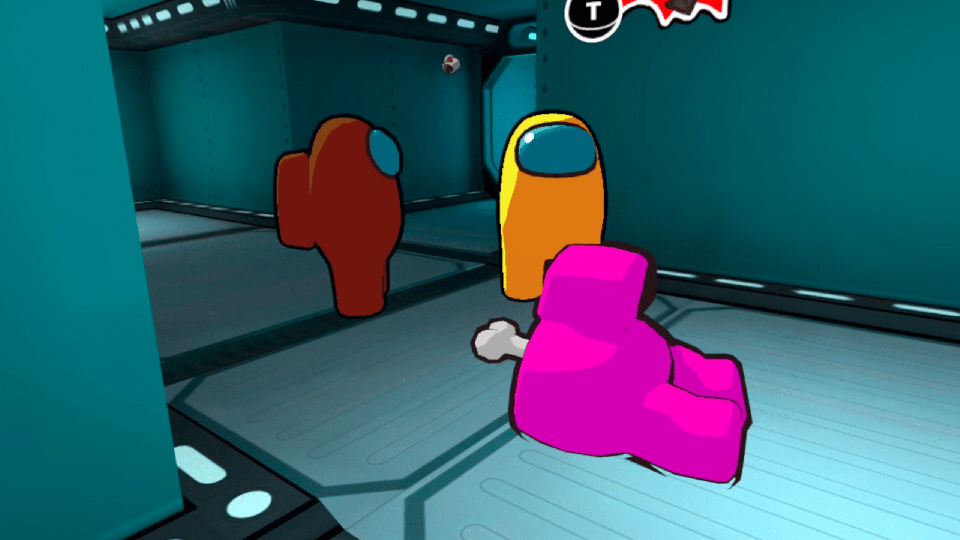 Dead bodies are never good, unless you are an imposter

After playing the VR version for a few hours, I dove back into the flat game and…it just wasn’t the same.  Gone was being inside the ship, interacting with it on a personal level while always looking over my shoulder to ensure no one was sneaking up on me.  It’s that presence in the game along with the voice chat, that for myself makes this not just a different way to play Among Us, but a better one.  There’s no progression system to speak of with Among US VR’s simple and effective design ensuring that just about anyone can hop in to see if they have the skills to sus out the imposter or get away with murdering those around them.   Even if you stick with the same group of people, you can never trust anyone around you as what happened the last game doesn’t matter in the next one.  I’ve sunk enough hours into Among Us VR up to this point to make the $10 price tag a very easy pill to swallow as this has given me some of the most fun I’ve ever had in a social VR game and for those that think this should be free…grow up, game development costs money and this is an entirely different version than the flat one currently available.

Schell Games provided The VR Grid with press codes for this title and, regardless of this review, we thank them for that!