VR is no stranger to rhythm games as it could easily be one of the most profitable genres for our headsets.  From slashing and punching incoming targets, shooting robots and people to a beat or even drumming in time with incoming notes, there are a wide array of ways to enjoy music in our games with one notable absence being that classic guitar hero type experience.  Unplugged looks to fill that void by making an air guitar sim that uses only hand tracking to play through some classic rock tunes. 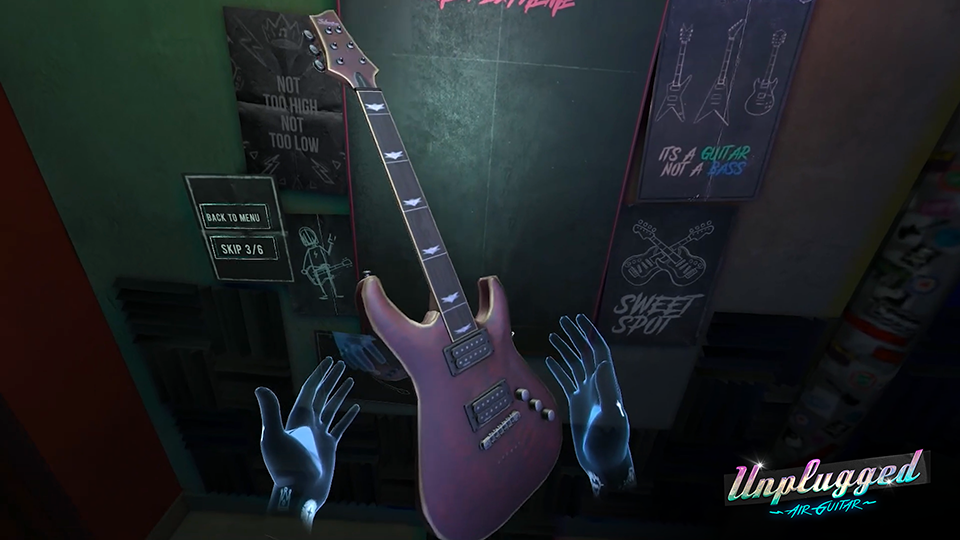 Grab your guitar and get shredding!

How does one play a guitar without a guitar in hand?  It’s simple really.  Before a song starts, all you need to do is position the guitar at a comfortable strumming height while holding the finger board.  Grab a nearby floating pick to start the song and it’s as easy as matching your fingers to the incoming notes with each finger highlighted by a different color that matches those queues coming your way.  The 1st songs to play (on easy) only slightly change up your finger position maybe requiring you to lift 1 of your outer fingers off of the frets though as you advance to the harder selections, you’ll be switching from all 4 fingers to 3 to 2 with a variety of ways to move your entire hand to get maximum points.  Those incoming finger positions come at the guitar in ‘guitar hero’ fashion, lining up with the angle of the guitar so how you decide to move affects the overlay of those incoming notes.  Outlined notes require you to strum when your fingers are in position and the notes hit the guitar with others only needing your hands to be in position and more that require you to vigorously move your hands to extend a sound.  It’s easy on paper but difficult in practice and after the 1st set of 5 songs, I struggled to get past the next, though admittedly that could be more my issue than the games.  Each album contains 5 tracks and in order to unlock the next album, you need to complete 3 goals in that current set with the ultimate goal being to not screw up as indicated by the screech of a missed note and the audience meter highlighting how much they appreciate your tunes.  Score boosts and modifiers will show up during the song in the form of cubes that you need to touch with the head of the guitar and at the end of a song you can cheer the crowd on, catching items tossed your way for a few extra points. Each song has 3 difficulties and attached leaderboards so you can see how you stack up with the rest of the world. 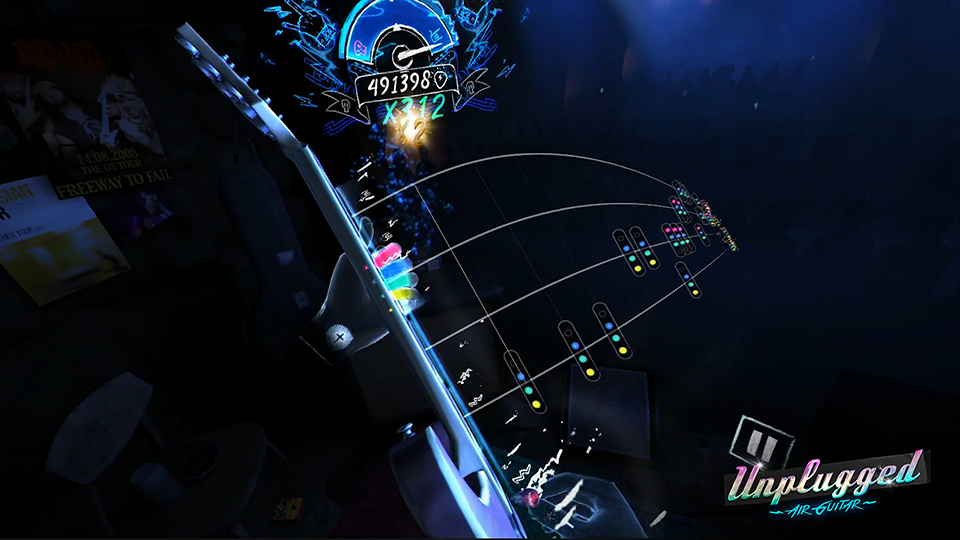 Easy to play, difficult to master.

Refined simplicity is the name of the game here with your stock guitar looking great and the various locales you play in all looking solid as you play in front of silhouetted crowds.  You’ll start off in a dive bar and slowly advance to bigger venues.  The better or worse you do, the more interactive the crowd becomes, getting louder and cheering you on and lighting up their phones or the reverse, as they boo your poor performance and toss food your way.  Depending on the venue, the lighting setup may be moving over the entire crowd with flashes and other sources brightening the scene for second or 2 though for the most part, you’ll only notice this before and after a song starts as you’ll be too busy staring at your guitar and incoming prompts to notice much else.  Satchel from Steel Panther acts as your teacher and guide, appearing in a poster before you during the tutorial and popping up throughout the game, offering advice on how to hit specific notes, power-ups and other tips, typically cheering you on throughout your rock odyssey.   The songs you pick have attached album art and so on making for a game that might feel a little small at times, but offers up a very polished experience reminiscent of classic guitar gaming titles 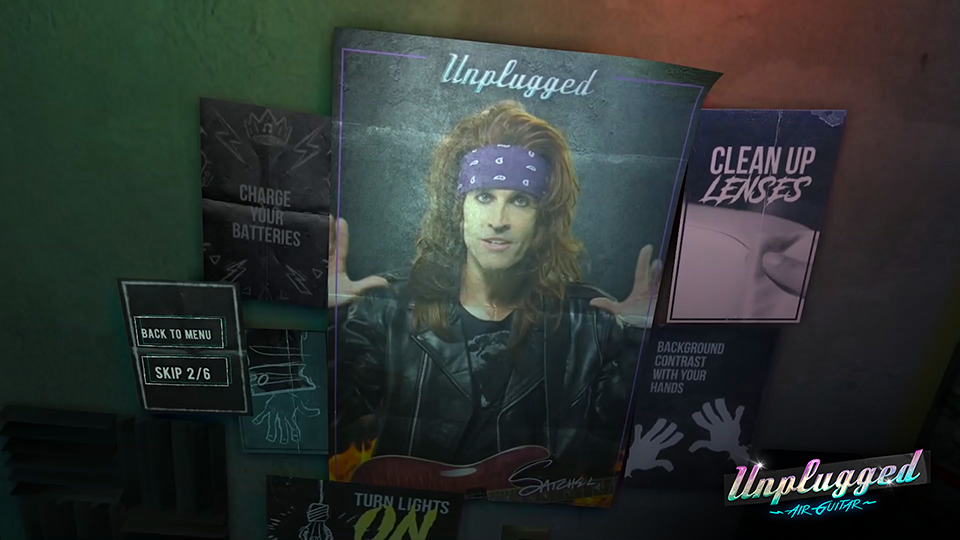 There are 23 songs to get through across a wide array of genres from classic tunes like the Clash’s ‘Should I Stay or Should I go’ to more recent 90’s alternative outings from the Offspring, Garbage & Weezer and a bunch of stuff in between.  Satchel is a charismatic dude with some solid line delivery and is a fantastic host for this rock adventure with the songs all sounding as if you were listening to them of a pair of headphones…which you basically are.  The songs play in their entirety whether you hit the notes or not, but should you miss notes you’ll here the screech of the guitar indicating that you need to up your game. 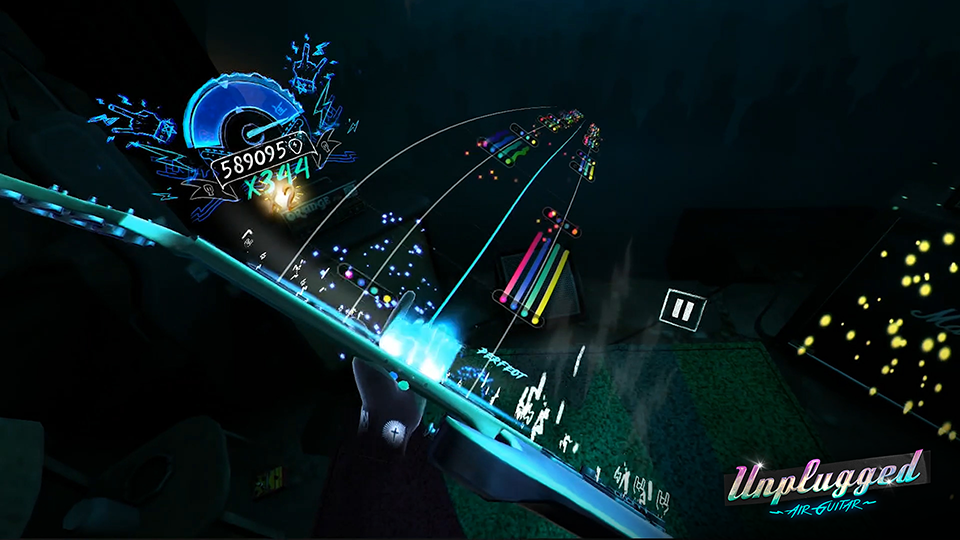 It’s all about making those combo’s!

Unplugged works quite well and the use of hand tracking is awesome, but I can’t help but feel like that new control method just might not quite be up to snuff for finer finger movements.  For myself, in order to register all 4 fingers down, I couldn’t leave my fingers loose like I was holding a guitar but had to squeeze them into my palm lest the game think a finger was raised when it wasn’t.  Not big deal on easier songs, but on harder ones where you are lifting and placing various fingers on the board it became a little awkward as, in order to ensure the game detected my fingers were raised, I had to really lift them up higher than my hands wanted to let them.  That brings me to my second issue which is hand fatigue as Unplugged requires a lot of hand dexterity and movement and after not too long my hands were stiff and sore and didn’t quite want to cooperate as well as when I first strapped on my guitar.  Thirdly would be that the game has each group of songs broken into albums that can only be unlocked if you do well enough on the previous ones to get gold or platinum albums on them, meaning you really can’t screw up.  Should you fail or not meet that minimum score, your only option is to try and try again, memorizing song patterns and tolerating songs you may have enjoyed the first time, but on the 5th play in a row starts get a little old.  An option to practice unranked outside of the campaign on any song would be great as the drive to unlock that new swag and rank on leaderboards should be enough to validate the campaign structure in place.   There is an option to tweak the latency on songs to better match the rhythm, but without really being able to tell where I was screwing up, changing this option really didn’t help me much.    I fully admit that it could very well be my lack of skill in this department but after the 2nd album, I could no longer come close to getting the scores needed to play the rest of the game and that was nothing short of disappointing as I was having a fair bit of fun rocking out.  Besides just unlocking the next album, performing well also unlocks more swag in the form of new licensed guitars & amps rewarding you for your successes. 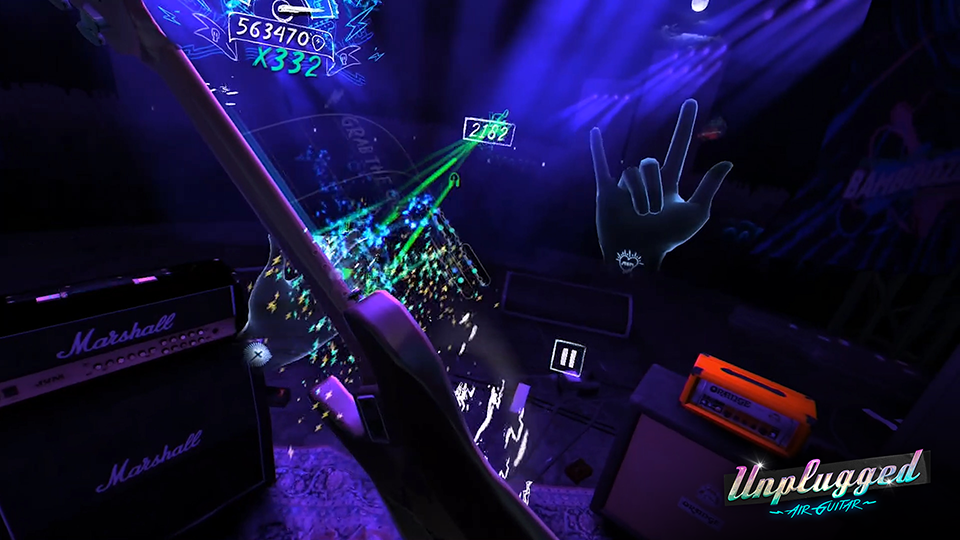 I like Unplugged a lot…I just wish I was better at it and that maybe the hand tracking was a little more on point though by no means is it awful with the game even going out of its way to ensure you’ve wiped down the external cameras and do everything you can to minimize tracking issues.  Fans of classic ‘flat’ rhythm games should eat this up as it feels like the VR equivalent of those titles, just without holding a guitar, which might not appeal to everyone as playing air guitar can feel awkward at times.  If you are looking for a new way to rock out in VR, Unplugged delivers a VR rhythm game unlike any other game for any headset.

What would I pay?  This is $25 and I would say it’s worth that price IF I had access to all the songs out of the gate.  I hate content locking in game like this based on skill as I do want to get better but would like to listen to more than just the same 5 songs while I’m trying to up my game.  Like I said, it could just be me but with that in mind, the full price is a risky one if you’re worried about your rhythm skills.