When Virtual Reality was originally conceived of many years ago in its simplest form, from Sci Fi movies to medical technology, creators and dreamers have imagined and structured a world of wonders to admire and interact with.  Of far flung galaxies to explore, vivid experiences and the endless possibilities of character performing, then you have to wonder why as a first release for the PSVR, stacking and building blocks in a pretty non descript environment would appeal to customers eager to lap up their first PSVR experience. 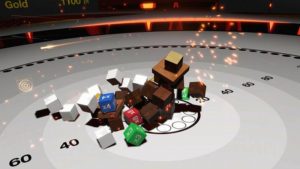 A well placed bomb always brings the house down!

Tumble was originally released on the PS3 for the PlayStation Move and here we have the updated release with a bit of a VR twist. It still utilises the move controllers to grab, twist, turn and place blocks but the PS controller can also be used, which I personally did find more intuitive. The motion tracking is excellent but on occasion can be a bit hit and miss at the far extremes of your play area as on occasions you have to reach high and low, stretch left and right to grab those blocks, so I do recommend you configure your camera tracking fully.

As explained, it’s a game about blocks, a puzzle game with over 70 levels which consist of achieving the highest tower, spanning a gap by using blocks to build a bridge, manipulating lasers and mirrors for further puzzlement and mental dexterity. Along with creating, you also get to demolish, by laying mines in tactical locations to bring towers down and score that highest points for the biggest explosion.

Although the premise is basic and not very imaginative, it’s all very immersive and the blocks themselves “feel” very real in so far as they appear to have weight and substance and it’s all very satisfying with the sound of them clunking into place. It comes across as very tactile, very much thanks to Supermassive’s understanding of the PlayStation motion controllers and the superb physics at play here.

Some blocks are formed of different material such as glass, plastic etc. and others are lighter and heavier, these reflect well their physics and nature so a good amount of forethought and planning is required at how best to place each block. Glass for example is quite slippy while rubber has superior grip.  Each level depending on your skill, rewards you with a bronze, silver and gold medal and a required number of these unlocks the next set of levels. The blocks you have to place sometimes need surgical precision but thankfully, because of VR, you can look around blocks and this just adds to the realism. 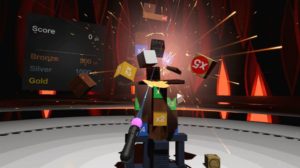 Attempting to build highest tower is a nightmare!

As well as a single player mode, the multiplayer mode consists of the wearer of the VR headset attempting to build while the opponent, playing through the TV, place lasers and bombs to bring them all crashing down. It’s fun to play and a great addition for any onlookers to take part in the proceedings.

You are guided through the puzzles by a floating robot, who at first appears quite funny but then after a while his quotes and attempts at humour seem a bit repetitive and tiresome, but other than a few minor shortcomings, this is a solid, fun but unremarkable game which won’t set your VR headset alight but will give you a good amount of entertainment, satisfaction and achievement.

What would I pay? The price point of £7.99 is perfect for a title while limited in play, has enough enjoyment, levels and multiplayer to justify the price.