I first loaded up Symphony of The Machine not exactly sure of what the gameplay entailed of, the story involved or its basic premise. The little I did know was that it is a puzzle game and that’s about it. 15 minutes into playing the game, I could honestly say that I still didn’t know any more than before I started it. 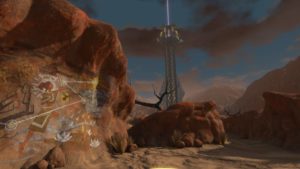 The rock paintings detail your objective.

What struck me at the start is that there are no tutorials, no introduction, no backstory, no instructions, you are just dumped in what seems to be a desert landscape with a huge tower in the distance with glyphs and glowing pedestals around you. As explained, this is a game which doesn’t hold your hand or guide you through its early stages and although this does add to the mystery of your environment and intrigue, it also adds a great deal more frustration. It took me a good ten minutes to fully realize the control system and I soon concluded that it wasn’t to my liking. It felt unnatural and cumbersome and my initial thoughts were that the camera tracking was very erratic. Grasping objects was more difficult than it should be and more miss than hit, but perhaps more space than my playing area allowed would have helped this. I was using the dual shock controller and though the game did not state it, I switched to the motion controller to see if it was compatible. Thankfully it was, and the game controls fared better, but not enough to eradicate its many faults.

Eventually I ended up at the top of the tower after a long elevator ride and some impressive vertigo, the game proper began. After an hour of playing and completing all the tasks given to me, I was ready to move on to another tower with a different set of objectives only to suddenly realize I had in fact completed the game. All that was left was a free movement mode which just lets you tinker with the games weather effects.

The main game itself involves mirrors, lasers and weather effects. You are first introduced to your little robot friend who guides you through what the puzzle requires. You must guide the laser using mirrors to target different symbols which each representing a different type of weather. Your aim is to grow a potted plant by utilizing these variables correctly. As you progress more lasers are brought into play along with splitters, more mirrors and a larger combination of weather types needed.

As a puzzle game, it’s challenging and thought provoking and is quite rewarding to achieve your goal but ultimately, as mentioned above, what lets it down is the control method and implementation. Your robot helper is less help and more a hindrance as he constantly gets in your face all the while as you are trying to manipulate mirrors and overcome the awful movement technique. There were quite a few moments where I found myself having to turn around and having the headset cables twisted around my ankles. Another strange design choice is the method of movement. This is achieved by moving a marker and teleporting there, but in a game which requires precision movement, getting to your required area is tricky and infuriating. 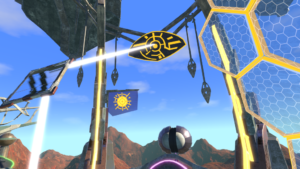 Make the sun shine with your mirrors

The visuals are nice, and though the game is set in one location, it’s an impressive view from your vantage point atop of the tower, enjoying the scenery around you. The weather effects need a special mention as don’t think I’ve come across rain in a VR game before. A strange thing happened when I came out of some shelter into the drizzle and for a split second felt water splashing on my head. I immediately had to take the headset off to see if anyone was around playing tricks on me, but no one was there. My brain was obviously tricked in to believing my surroundings and the feeling of water was all in my head.

Which leads to very realistic and immersive title; a game which highlights all the positives of VR but at the same time, emphasizes the cons of restricted movement and tracking issues. Added to that is the extremely short campaign and zero replayability. Some enjoyment is to be had with the few puzzles, however the awkward controls and gameplay mechanics overshadow the good points.

What would I pay?  £18.99 is very expensive for what is a short, limited and frustrating game. In its current state I would only pay around £7.99.