Ah, the quarterback, to many the most prominent position in football and coveted by many yet held by few.  Well now you get your chance in Throw, a quarterback simulator that strips the football genre to its basics, but than adds a little bit of depth back for the purposes of VR. 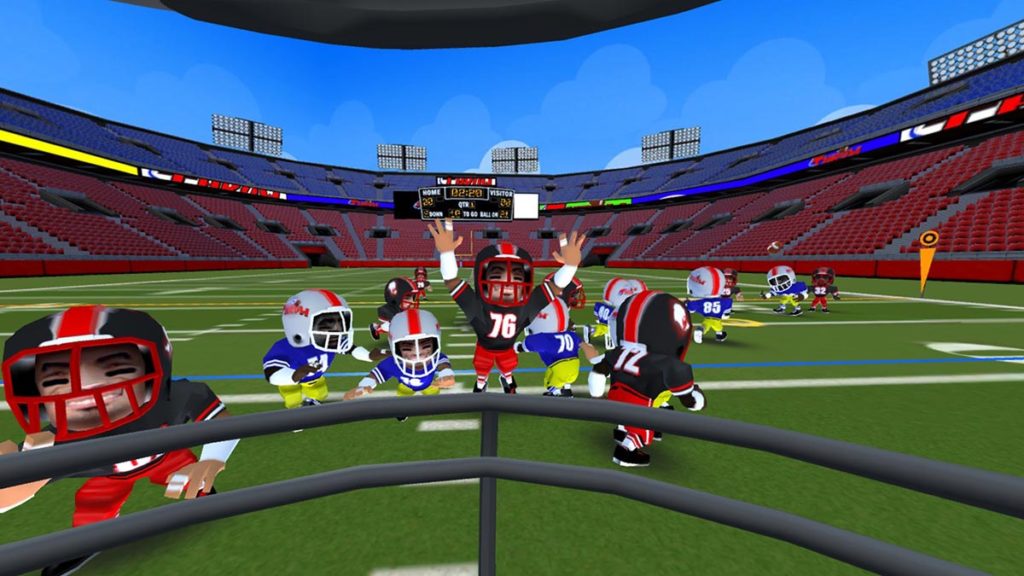 When the Defence fails, you better pass that ball fast!

As the QB, your job is simple, throw the ball to the desired player, advance toward the end zone and help your team get a touchdown.  All the rules are still at play here; you need to make downs, pick your plays before facing off, watch out for interceptions and so on.  With 2 methods of control I’ll cover the headset only one 1st.  Every action performed in the game is by tapping or swiping  on the headsets touchpad, with tapping being used on any menu type options, and swiping to throw your ball.  The angle and speed you swipe affects the distance and arc of your ball toss.  It’s a simple mechanic that would make for a fun game minus one key issue…it sporadically works.   This is thankfully remedied by the touch controller which has much more intuitive controls, using the trigger to grab the ball than flick your wrist and let go of the trigger to throw it.  How fast you flick your wrist affects how far the ball goes.  This just feels more natural and the motion of flicking your wrist emulates how you would throw the ball in real life nicely.  You only play while in possession of the ball so when it’s the opposing team’s turn, a brief written summary pops up explaining what happened, then you are back on the offense and playing again.

The optional tutorial plays alright, challenging you to toss the ball through a swinging tire and a few other targets.  After I left the tutorial, I felt okay with my skills and was ready to tackle the main game and so my troubles began.  Using only the headset, I picked my opening play, I watched the chaos unfold after I held the ball, eyed my receivers, waited for my opening and when it came I tossed that ball so far ahead of him that he had no chance at catching it.  Same play again, less power and my ball went way to short.  3rd play, different strategy and when I swiped the touchpad no ball was thrown at all and I was tackled.  This repeated throughout the whole game and I think I completed 4 passes throughout the 4 quarters of play.  Change it up to the Touch controller and the difference is immediately noticeable.  The passing just feels better, and I completed a majority of my passes, both near and far, and the game just played out more naturally.  A pass or 2 were intercepted or incomplete, but that’s football.  The touch controller is definitely the way to go!

The AI is not amazing here, but they do their job.  You pick your play, hike the ball and watch the players go where they are supposed too, which is great.  The problem is after they get to their chosen spot, they stop moving, which makes sense if they aren’t covered by the defence, but on many occasions they are, leading to some frustrating moments when you’ll wish the AI actually had some intelligence.  Still, in no way is that game breaking and after multiple playthroughs, I knew where and when players would go and stop with each play, allowing me greater accuracy in my throws.  Each team has their own stats and you really need to take this into play as the differences are both accurate and noticeable.  This was a nice little addition that did add to the realism of the game. 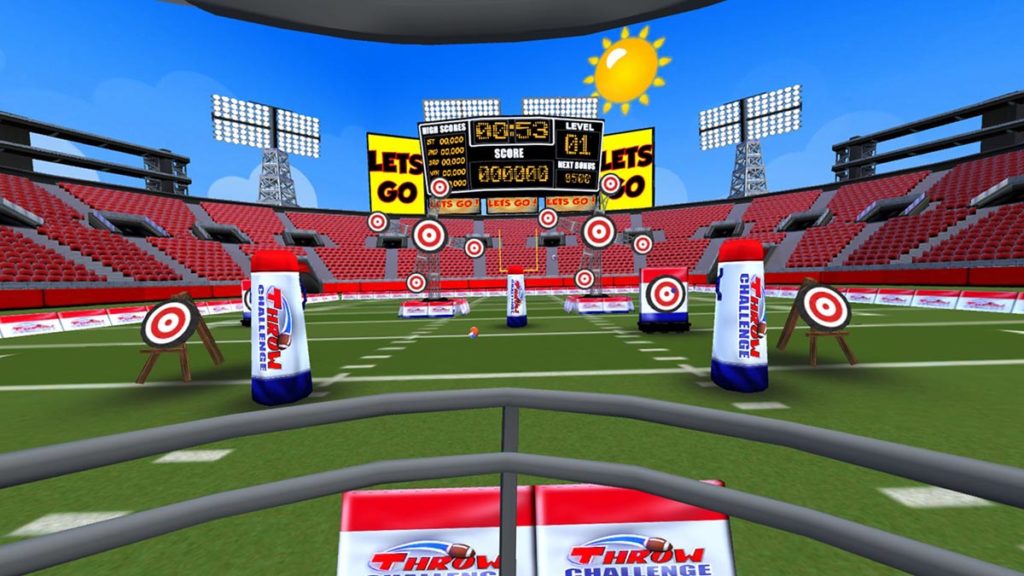 Their are 2 other modes available, the first being target practice.  It’s simple, but it works for the most part and though lining up your tosses is still difficult, the targets repeat themselves so trial and error and unlimited balls make it a little easier to line up your shots.  The 2nd mode is a horde mode when you must defend against wave after wave of players rushing toward your position.  It starts off easy enough but gets quickly overwhelming, and this is mainly due to the controls.  The headset allows for faster throws with less accuracy, so you can overwhelm the incoming players with a plethora of projectiles, but eventually you will succumb.  The touchpad has the opposite problem with faster throws being sacrificed for accuracy, meaning missed shots cost you much more dearly.  The latter waves are loaded with so many players that the only way to pick them off is early, when they are far away, which is problematic due to the finicky controls, though multiple attempts did have me fairing a little better over time…but just a little.

It’s a small game and for what they tried to bring to the table they succeeded visually.  Character models are cartoony and exaggerated with giant heads and tiny bodies.  The character animations are a little sparse, but for the purposes of this game, they do alright.  There is a slew of teams to choose from and the team logos and colors pop up the individual players attire.  Animations are on the stiff side, but aren’t terrible.   Overall I thought everything here looked alright.  There is a lot happening on the field and with so many players moving on their own accord, its impressive to see the action unfold. 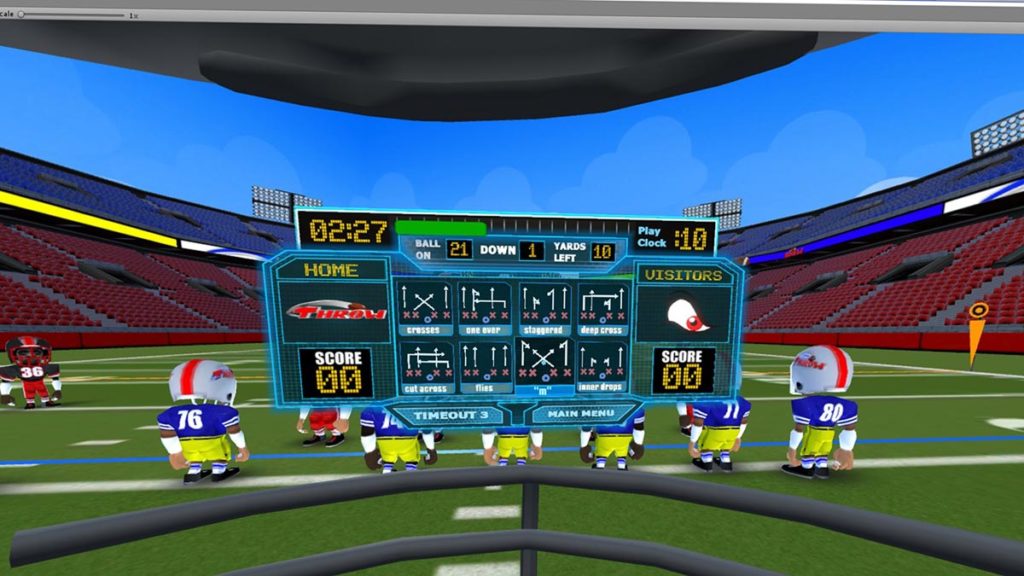 There is some fun here and the way the devs smushed a whole football experience into a game with a singular mechanic is impressive.  That said, the headset controls frustrate me and team AI could use a little tune up.  Still, if you have the touch controller than many issues are instantly remedied by its use and the overall game just feels better with the controller in your hands.  If you are looking for a micro football simulator and you have the touch controller, you’ll probably come away from this with a smile on your face.

What would I pay? $5 seems excessive and i would personally pay closer to the $2 – $3 range, but I’m also not really a football fan.  I think for those looking to scratch that VR sports itch than your $5 is probably well spent here…provided you have the touch controller.

Bolt Gaming provided theVRgrid.com with a review copy of this game and, regardless of this review, we thank them for that!