Goalie VR is a hockey-based game where you play as a goalie, blocking as many pucks from the goal as you can. While this game is extremely simple, it provides all the options and content that you could necessarily hope for. Despite having some seriously ambitious features, it suffers from being far too “hardcore” and from a reliance on VR peripherals that most VR gamers don’t own.

Your first (and only) gameplay decision in Goalie VR is the placement of offensive players. You can select one of 96 setups that determine where enemy players will be stationed, or you can drag-and-drop players directly where you want them to be. You can also choose one of three standard difficulty options that apply to each offensive player individually. Having an enemy team with a diverse variety of skill levels adds realism, as well as a method of fully customizing your experience. This reflects on the game’s solid user interface, which contains helpful tutorial messages and makes the game’s features easy to navigate. 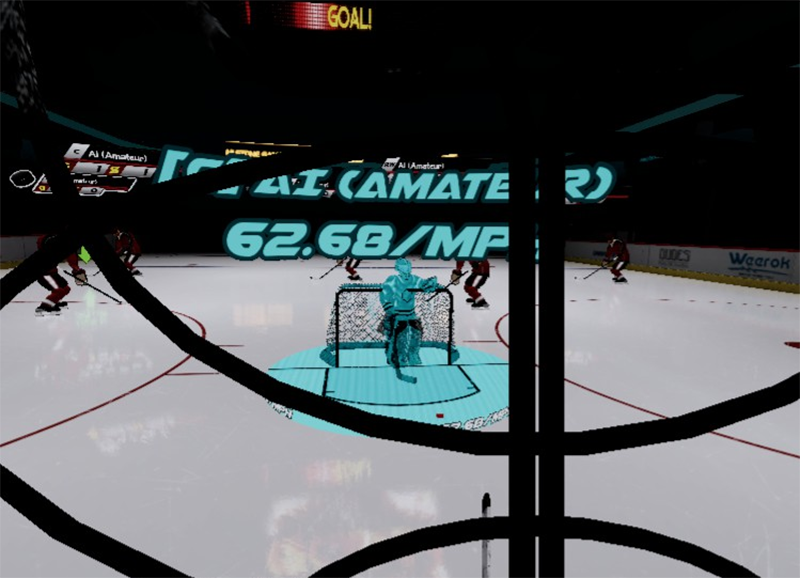 When starting a game, the player finds themselves on the rink in total darkness. Bright lasers and spotlights flash around you, as rock music blares and the crowd cheers. This is a cliché attempt to hype up the player, but I must admit that it’s well-done and worked in getting me excited. This sequence also shows off the game’s solid graphics, with colorful lighting and crisp textures.

Pulling the trigger stops this cutscene and spawns the offensive players in their appropriate locations. They never move and remain standing where you ordered them to. One player gets the puck spawned at their feet, and they make the decision to pass it to their teammates or shoot at your goal. You’ve got a stick in one hand, a glove in the other, and pads on your legs that can all be used to block the puck. After either blocking a puck or missing it, you have the option to instantly view a 3D, slow-motion replay right in front of you. These replays pop up as holograms mid-game. This is extremely useful for honing my skills, realizing where I’ve been going wrong, and improving my defensive skills. 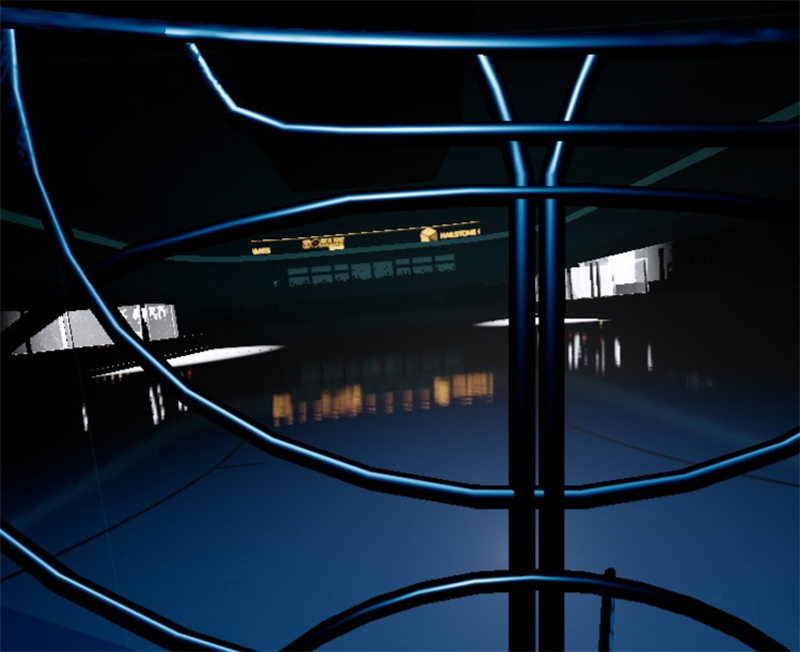 Unfortunately, your glove is the only utility that actually feels helpful. In VR, it’s hard to feel when your stick is touching the ice or sliding against it. Therefore, it’s easy to accidentally hold it right above the ice, letting the puck awkwardly slide right under it. Your leg pads are also incredibly useful, but hard to control. Squatting causes your legs to spread, with the pads moving accordingly. This means that if a puck is flying at your legs, and you squat to block them, your pads will spread and give the puck an entrance between them. This issue exists because in-game leg pads were designed for use with Vive Trackers and can’t be taken advantage of without them. In the trailer, you can see the player sliding trackers into their knee pads and controlling their legs in-game. This would be extremely cool, and a beneficial feature to the game at large. However, I wouldn’t expect most VR players to spend $200 on Vive Trackers just so they can move their legs in Goalie VR. It’s awesome that the feature is there, but for most players, it serves to do nothing other than make the game even harder.

This difficulty is Goalie VR’s worst aspect, practically ruining the game. Now I don’t play hockey, and I’m sure that if I were to play in real life, I would be just as bad (if not worse) as I am in game. However, this game is so realistically difficult that I would (from my perspective) consider it nearly unplayable. You must have the lightning-fast reflexes of a real-life NHL goalie in order to even stand a chance at winning in Goalie VR.  From the point that an opponent hits the puck, you can’t even blink before it’s already in your goal. After watching countless replays, I realized that most of my (already very few) saves were done by accident, with the puck bouncing off my shoulder as I dove in the opposite direction. 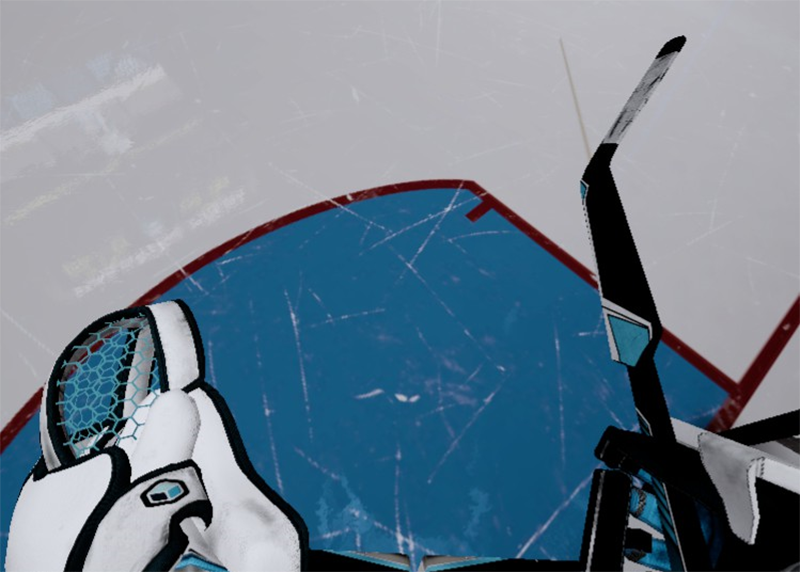 Without Vive Trackers, squatting makes your legs awkwardly flatten into a surprisingly-ineffective barrier

Changing the aforementioned difficulty setting for each player doesn’t even help much. I set every player on the easiest difficulty, and still got utterly wrecked every time. The problem with Goalie VR’s difficulty isn’t necessarily just that it’s “hard-” rather, it’s too realistic. I’m fairly athletic but being physically active isn’t the hardest part of doing well in Goalie VR. Rather, your reflexes must be so fine-tuned, that I wouldn’t expect any non-hockey player to block a single puck.

Although Goalie VR can be played with bots, it has a local multiplayer mode as well. This involves a separate mobile app. On your phone, you can play as an offensive player, making swiping motions on the screen to hit the puck at a certain angle and velocity. Launching this app nearby a friend playing Goalie VR allows you to join their server. Up to five friends can download the app and play together. They can pass the puck to each other, allowing for some seriously competitive sports gameplay. You can even download this mobile app for free, without the VR game, and practice your offensive skill away from home. 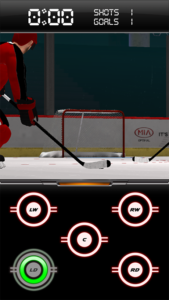 While the mobile game is a cool concept for local multiplayer, it isn’t even remotely fun

While this style of local multiplayer is an incredibly cool concept, the app is glitchy, boring, and inconvenient. Your swiping motions send the puck in all sorts of uncontrollable directions, and your ability to score goals boils down to just getting lucky. Swiping is unresponsive, requiring a vigorous rub of my screen to make it work. This even lags on my phone, my player not hitting the puck until multiple seconds after swiping the screen. The buttons for passing it are also unresponsive, making me finger-mash the button many times for it to even work.

The actual gameplay in Goalie Mobile is quite irritating and generic. The harder you swipe, the faster the puck flies. That’s the entire game. Even if it was enjoyable, it’s unrealistic to expect anyone to play with you. It’s hard enough to convince people to download a new (large) app for your sake, let alone such a mediocre one. My friends usually enjoy playing VR with me, but I don’t know many people willing to devote their phone’s storage just to play a hockey game with me.

The content value of Goalie VR also falls short. Each round only lasts 2-5 minutes, depending on how many pucks-per-round you choose. It’s incredibly repetitive- blocking pucks is the only thing you can do. Each play feels nearly identical, with slight variation based on the placement of offensive players and their difficulty. In defense of Goalie VR, the gameplay offers little more than you could expect from an authentic sports game. Nonetheless, it only takes ten minutes of gameplay before you’ll have experienced everything Goalie VR has to offer.

What would I pay for it?  For me personally, this simply isn’t fun. If I enjoyed playing hockey in real life, I’d pay $5 for Goalie VR. It’s very bare-bones, and suffers from some serious design flaws, but it delivers all you could really hope for in a title like this. I would not suggest paying the full $10 retail price for this game, but if you’re a passionate hockey fan, it may be worth picking up on sale.

Hailstone Games provided The VR Grid with a review code for this game and, regardless of this review, we thank them for that!