What is God? In Tethered, you are God. Need I say more? Yes, of course I do…this is a review. This is one of those rare God games like Black & White and its great sequel. If you were a fan of those games, like I am, then you will probably enjoy this as well. I was very impressed by this really, really well put together game with its charming art style and extremely thought out gameplay. 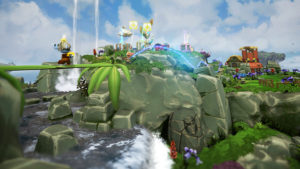 The level of polish and the world created in VR is really something to behold.

The dev team has done a remarkable job creating a fully fleshed out video game that is one of the few “full length” games on the Vive. The camera is a major component of playing and enjoying it with several different control options available. The player can either select different viewpoints, predetermined by the designers, or use the controllers to move around the world. I found the fixed camera options were useful to quickly change views and the motion controller camera changes were relatively easy once I got the hang of them. Motion sickness plagued me again while using this game but they have adjustment options I found really helped me avoid any major issues, but it limited my vision so I played without them, like a champ!

Besides being God you also have to manage resources and units while spending your time during the day preparing for the night, when the enemies come out to wreak havoc. There are multiple units to select from but it boils down to being a builder unit or a fighter unit. I was surprised with how much there was to do in this game, it’s very unusual for a Virtual Reality title of any kind to give you this much game to play. I liked it.

What I really enjoyed was going from a top down, somewhat isometric view of the world, to zooming right up to the action. You can zoom in all the way to make it feel like you’re standing right beside your units. It was awesome! The art looks amazing from all angles and I think that might be my favorite part of the whole game. Very bright, cheerful and fun. This game knows it’s not to be taken to seriously, and the art style reflects it though that doesn’t detract from the high-quality design and polish presented. This is one of the best designed VR games out there right now.

I did find the tutorial was a bit long but after getting through it I was somewhat enjoying myself and I was immersed in the world. There’s a lot of buttons used in Tethered, most games don’t bother utilizing all of the controls available for the HTC Vive and I’m glad that the Secret Sorcery stepped up to the plate and delivered. The most surprising aspect of this game was how good it felt on the Vive, despite being developed for multiple VR headsets. Generally speaking, when this happens, a game is stronger on one platform compared with another.

Though this is a fully realized product that I very much admire, the game didn’t really stick to me. Even being a fan of God games this never really made me feel that enthused while I was playing. I found myself being more impressed with the quality of the game and its design and less so with the actual playing of the game. The art style isn’t really what appeals to me in a game, though I felt really bad whenever one of my little alien babies was hurt or killed by the evil bugs, just because they’re so damn cute. 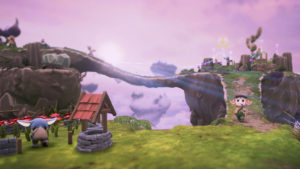 The first time one of these guys dies on you, I challenge you not to care!

I don’t mean to take anything away from the game. From the gameplay to the audio there’s nothing here I would say makes this a bad game, but there’s also not a lot to compel me to play it again.  Each successive level just kind of felt like same thing all over again. This game was very relaxing, well made, and different from most VR games.

For those reasons alone I find this to be a very admirable effort, provided you’re into God games and don’t mind a cutesier art style.  All in all it’s a recommended title from me. Great job to the developers for creating something totally outside of the box. This Gives me hope for future RTS games in VR.

What would I pay? It’s worth $27.99 if you want a different sort of Vive game, or if you’re looking for a God/RTS game. Otherwise I’d wait for it to be on sale.

Secret Sorcery Ltd provided theVRgrid with a review copy of the game and, regardless of our score, we thank them for that!