Well, this was a surprise.  Tethered is a god game using basic genre principles, but maximizing their use and effectiveness.  The cutesy visuals aside, this is a game that is difficult to master and will require fast reactions from you as well as some top end delegation skills to conquer the 14 levels presented here. 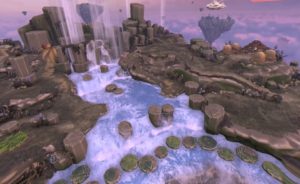 Some of the visuals here are actually amazing!!!

The name of the game comes from the mechanic of clicking and dragging peeps (and weather) to an assigned task or target.  Want to gather some fruit, look at your peep, hold X, look at the fruit and release.  It’s easy!  However, the introduction of resources adds a difficulty curve, as well as building and upgrading structures.  Throw in some weather elements to replenish your resources as well a class system to specialize your peeps to certain tasks (farmer, warrior, forester…) and you have the perfect recipe for a hectic battle against time.   No move support for this one, just good old fashioned DS4 gaming.

The goal of each level is to make the floating islands you play on green again.  To do so you need to collect Spirit Energy.  The more you accrue, the more of the level you turn green, allowing you to build and upgrade more structures.  Once you get enough energy the level is over.  Every task completed gets you some amount of energy so the goal is to upgrade, build an protect your peeps from danger.  That danger consists of hunger, boredom and damage.  When night time hits, the baddies come out to wreak havoc upon the lands.  These slug-like creatures come from all sides to consume your resources and kill your peeps.  Night time is the most stressful time in this game as chaos ensues while you try and keep your peeps alive and organized.

Each night cycle gets more difficult so this game is as much a race against time as anything else.  Night time also gets you a tonne of spirit energy so it’s also in your best interest to kill every creature you see.  Oh, did I forget to mention that you have to replenish resources as well as farm them.  Dragging specific elements over their assigned resource will restore them, but elements deplete if not used so you need to constantly keep your eye on the skies and resources below to make sure you keep everyone happy.

The sense of scale here is great, I really felt like I was looking down upon these tiny creatures on these small islands as if I were a god.  The cutesy, colorful visuals are actually quite nice to look at.  Everything feels polished here from the elemental powers to the flora and fauna that populate each level as well as the surrounding backgrounds.  The developers took their time to make this virtual world feel alive.

The majority of the sound here is through audio queues from your peeps or elements.  Count down timer chimes start when elements are about to disappear, stomachs groan when peeps are hungry, or peeps themselves will let out sounds of exasperation if not given a task.  The melodic soundtrack is also top notch (you can even buy it in the PS Store) with light musical tunes giving way to the night times sombre, yet action-packed chords.  It all works great.

This is a micromanagers dream… guide your peeps, construct buildings, feed your peeps, replenish your resources, collect tombs that unlock building option, defend against the night, spawn new peeps, assign roles…the amount of option here gets quickly overwhelming.  Thankfully the devs put in a rating system so the levels can be beaten even if you are barely surviving. You’ll just see a lot of D and E grades as you complete each level (I know I did).  That’s the pull here.  The levels play out the same with the main factor mixing them up being level design.  You will feel the need to go back and play through a level again as each level you advance to just makes you a better Spirit Guardian, and with practice those ‘A’ scores will come. 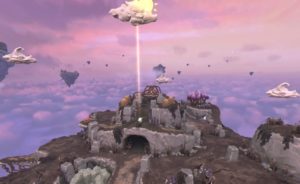 Each levels’ design offers up its own unique challenges

My only complaints really were that some of the level design cut off significant portions of each level depending on where you are viewing from.  The mechanic there are to look at clouds affixed around the island to switch up your viewing angle.  Time is precious and I wasted more than a few seconds trying to get a peep across an island fast enough to incubate an egg when I should have been doing something else.  It doesn’t happen a lot, but it does happen.  Secondly, while the tutorial level sets up the game nicely, it doesn’t show off all the structures leaving it up to you to learn what each building does.  Not the biggest deal, but in a game like this I’d rather play than read.  Still, both those complaints are pretty minor when compared to the overall package

This is an addicting single player experience that will appeal to God game fans and even strategy fans as well.  The mechanics at play here work almost flawlessly and the time sucked away by this game will thankfully be rewarded by fun.  The level design and complex mechanics offer up a challenge for anyone, especially those that pride themselves on getting perfect scores.  This is great game that I definitely recommend people pick up, especially if it goes on sale.

What would I pay? $32.99 is perfect.  There are hours of gameplay here, as long as you are motivated to replay levels to get better scores.  That and it’s just plain fun.

Secret Sorcery Ltd provided theVRgrid with a review copy of the game and, regardless of our score, we thank them for that!