This review has been updated on April 04, 2020 to reflect the release of the PSVR version and as well any additional content available at that time.

If it’s not obvious by now…I love VR and it has changed the way I game and how I enjoy games thanks to new levels of immersion and interaction with the worlds I’m placed in.  That said, VR has gaps, one of which is the RTS genre and it lacks entries comparable to classics like StarCraft or Command and Conquer.  Sure, we’ve had approximations of the genre, but none have quite captured that classic formula when it comes to VR with clunky interfaces or streamlined gameplay mechanics that simplify the games too much.  Now we get Final Assault, a WW2 inspired action strategy game that hearkens back to the RTS’s of yesteryear with more recent MOBA additions. 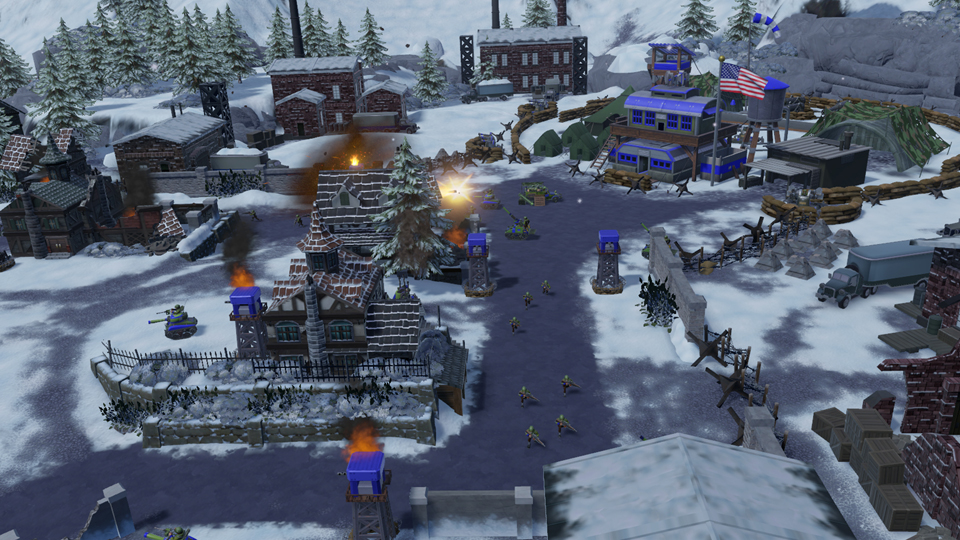 RTS’s hold a special place in my heart.

Despite the genre, the controls in here are actually pretty simple and nearly identical whether you are playing on PSVR or PCVR headsets.  You tower over the battlefield and can drag yourself around the map in any direction you choose by simply holding down the trigger buttons on your Motion controllers, or that center button on the Move controllers,  and pulling or pushing wherever you want to go.  Removed from this game is any kind of resource management and base building as instead you automatically accrue money needed to spend on units and you have one main base from which all your troops deploy from which you must defend at all costs.  You spawn your troop clipboard with a press of a button with the lower 2 tiers readily available. To unlock more advanced troops you need to save, or pickup, money to purchase the troops at that level.  Like any modern age RTS, you can choose smaller units like jeeps or troop carriers, which spawn endless soldiers, to planes, anti-air, artillery and stronger variations on all of them.  MOBA elements arise in every map as each one is a realistic setting containing paths and roads your troops will travel on.  Simply place whatever troops you want anywhere on that path and they will spawn and head in that direction, following it all the way to the enemy base, destroying any enemy units that get in their range.  You can order individual units where to go anywhere on the map and target specific enemies for a more focused assault giving you that classic RTS feel.  Supply drops, are delivered from passing by planes and can be picked by either team so when the announcement of supplies is inbound, make sure to have a unit at the marked drop points on the map ready to nab it.  Available in the game is a storied campaign, skirmish mode as well as 2-player cross platform PvE and PVP mode ensuring you can jump in at anytime for a quick or extended gaming session. 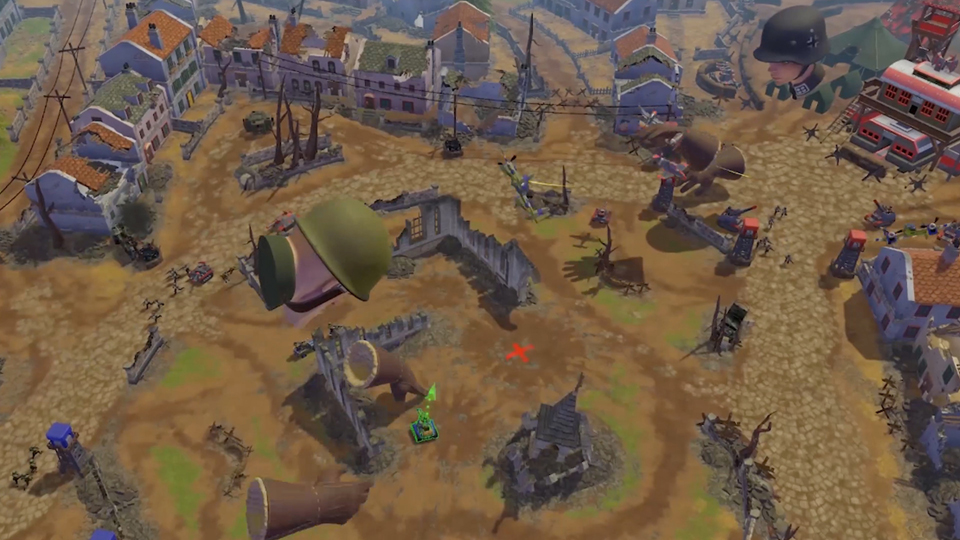 Play with or against people in the online modes!

Visually, whether on PC or PS, the game is stunning with realistic settings comprising each map but made to a scale that looks like a diorama.  Unlike other games that utilize this type of scale, I never felt like I was like looking miniature versions of real-life units, but rather full-size units, but from a scale that just made them seem smaller.  That might not make sense, but regardless it’s a great looking game with highly detailed and large levels.  The game has a cartoonish and exaggerated look to everything upon close inspection, but as I typically viewed the battlefield from a distance, the finer details were lost in favor of the watching the entire map from on up high.  Going in for a closer look reveals a surprising level of detail on all the models with the presentation here being very, very impressive.  Once the battle gets going, explosions and gunfire pepper the map with vehicles blowing up in exciting fashion with detail that almost seems excessive with great particle effects, flames and debris flying out in all directions.  The environments don’t showcase any permanent damage and are static, but by no means did that interfere with my enjoyment of the game.  Supply planes announce their arrival and you can follow their shadow path on the map to which drop spot they may be heading with the larger attacks you are capable off delivering massive, and impressive destruction against your foes.

Accompanying the great visuals is some equally great audio and this is mostly due to the sound effects that match the hectic and non-stop action on the battlefield.  There is a little voice-work in here, though it’s mostly 1-off moments.  A typically military soundtrack is there to help put you in the warfare mood with the entire audio package being exactly what you would expect with really nothing to complain about, though I wouldn’t have minded some voice acting assigned to commanders pre-mission, if not just to give them some character but that’s just personal preference. 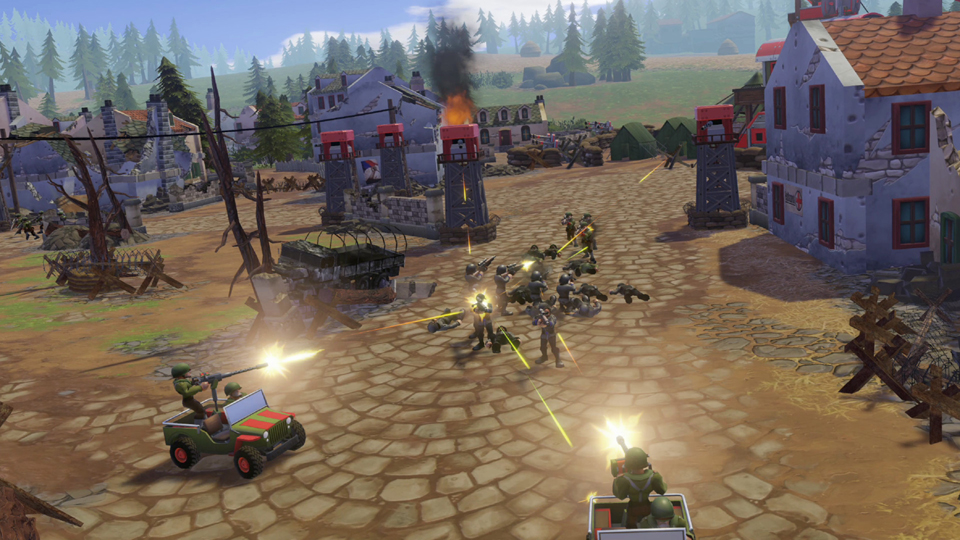 The level of care and detail in this game is impressive.

The campaign is very reminiscent of Battlezone with the 2 sides (US & Germany) starting on either side of a map broken up into hexagons with each hex acting as a point that you must take over.  You simply grab and place the unit representing the troops onto an adjacent hex and take it over, automatically placing a base.  Where things get interesting of course, is when you try and take over an enemy controlled hex, or vice versa and take to the battlefield.  Each commander has access to different troops and play to there strengths with some being better at ground attacks or air with unique troop types that will require you to learn to both use and defeat these commanders.  You can further customize your own Avatar and troops by changing up your regiments color scheme and banners.  There are 14 different stages in the game with the actual battle grid you play on randomly placing them on the map.  As such you will see the same environments repeat themselves but with various modifiers that spice up the action like just having to survive for ‘x’ number of minutes or being limited to select units only.  Spamming troops isn’t really the best option as taking and controlling specific points in the map is the key to victory.  Any story here is superfluous as the only real goal is to wipe out the enemy and claim victory with every playthrough of the campaign offering up different challenges. 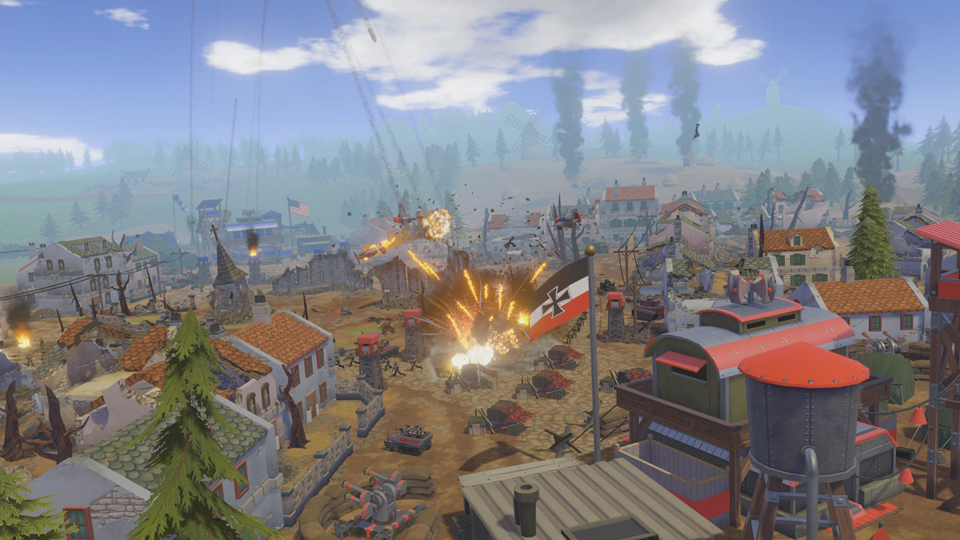 Rain all hell from above and annihilate your foes!

Final Assault delivers a fun and addictive RTS title reminiscent of those classics I mentioned earlier but optimized for VR.  The controls are so simple that anyone can pick this up and know how to play within about a minute or so and playing with or against your friends in the online portion is great fun.  The dynamic nature of the campaign ensures you can play through it multiple times and still have a fresh experience every time you jump in.  Add in that each Commander has advantages and disadvantages, and this turns into a chess game of sorts as you try and account for your weaknesses while exploiting the enemies’.  I really dug this and expect to spend a lot more time in here as the addiction factor on this one is high!

What would I pay?  This is $30, putting it in a slightly higher tier pricewise then your average VR game and worth every penny.  Everything in here has been refined to near perfection making for a game with very few flaws and engrossing gameplay that more then makes up for any issues the game has.

Phaser Locker Interactive provided The VR Grid with press codes for this title and, regardless of this review, we thank them for that!