As VR establishes itself in mainstream media, game developers have been clamouring to bring tried and true experiences to this ever-expanding medium.  Korix is just that as it is only the second tower defence game I have played in VR and the 1st to utilize RTS mechanics as well.  What this ends up becoming is a fun and extremely challenging game that will require hours to master. 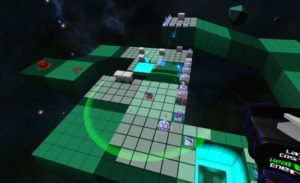 The levels get difficult very fast so be on your toes!

Manipulating the environment is handled with 1 Move controller, the in-game representation of your controller carries with it a laser and a few more add-ons to assist in your gaming.  Point your laser, and perform an action.  Build defences, spawn workers, offensive troops and upgrades; all the standard RTS tropes are here, though not in any crazy amounts.  There are only a handful of buildings and the same for offensive troops.  Add to that building caps and resource depletion and strategy becomes the key factor in attaining victory.

The look if this game is heavily stylized.  Units are little more than 3D shapes stuck together to differentiate themselves from other troop classes.  Vehicles and defensive weapons are of a similar vein carrying with them a minimalist look using a simple color palette.  That simplicity does lend itself well to the style presented.  Everything is sleek and sharp looking.  Even the space backgrounds look stellar with rotating planets and stars to help make you feel like a god.

Given how you view the game and the world before you, this does carry with it a god-like vibe.  This is especially apparent in the multiplayer where your avatar appears as a giant head.  Leaning closer to the action amplifies the sounds of battle, and there will be battle.  Playing through the campaign on medium difficulty, it only took a few levels before the increase in difficulty was noticeable.  Trial and error will get you through, but you may find yourself failing multiple times before you are victorious.

The challenge is two-fold; defend your base against unrelenting waves from the enemy while trying to grow your base toward the enemy and wipe their base off the map.  Every wave is progressively more difficult and the first few minutes are a mad dash to establish yourself before the games pace becomes overwhelming.  Easy, Medium and Hard difficulty settings are here if you find yourself over (or under) whelmed.  There is also a skirmish mode if you are looking to just hone your skills without failing at the campaign or online, the further you progress in the campaign, the more skirmish levels you unlock. 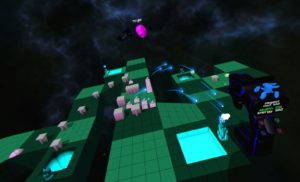 ‘TTryler’ gloating over yet another victory over my poor self.

Multiplayer is a huge plus to this game, but its not without its setbacks.  Firstly, as of the review, there were only 48 people on the leaderboards, which implies a serious lack of online competition.  Secondly is the nature of these games. Exploits are much more apparent online and it seemed to me like the only way to win was to default to the winning strategy that experienced players use. I found myself getting rolled by players with more familiarity with the genre/game than I .  My opponents, while stomping me, echoed the same sentiments stating that their strategies were unfair and need to be remedied.  Hopefully future updates fix these issues and make for a slightly more even playing field.  On the bright side, there is a co-op option to team up against the AI foe.  It’s a lot of fun and the full mic support makes it easy to coordinate with your teammate.

Multiplayer aside, this feels well balanced.  The campaign, though challenging, is conquerable as long as you utilize all the units available.  There aren’t many building/unit (5 each I think) but with each one designed as a counter to an opposing unit, strategy will change based upon how you are attacked and only your fast reactions will get you through to the end.

This is solid title and a great blending of genres.  If you are a fan of Tower Defence or RTS games than you should probably buy this ASAP.  There is no other game like this in the PSVR catalogue, and thankfully, it plays well enough to be a credit to genre and a great addition to your PSVR library.

What would I pay? $20 is perfect.  The campaign is fun and challenging.  The multiplayer needs some TLC, but hopefully as more people pick this up and updates roll out, those issues will be remedied.