League of War is a table-top RTS with an emphasis on simplicity, allowing for just about anyone to pick up and play a round without feeling overwhelmed.  In fact, it’s simplicity belies its mobile roots and you can totally see how this kind of game could easily work on smaller mobile devices, in or out of VR.  That said they Munkyfun has put a nice VR polish on the League of War franchise with this entry. 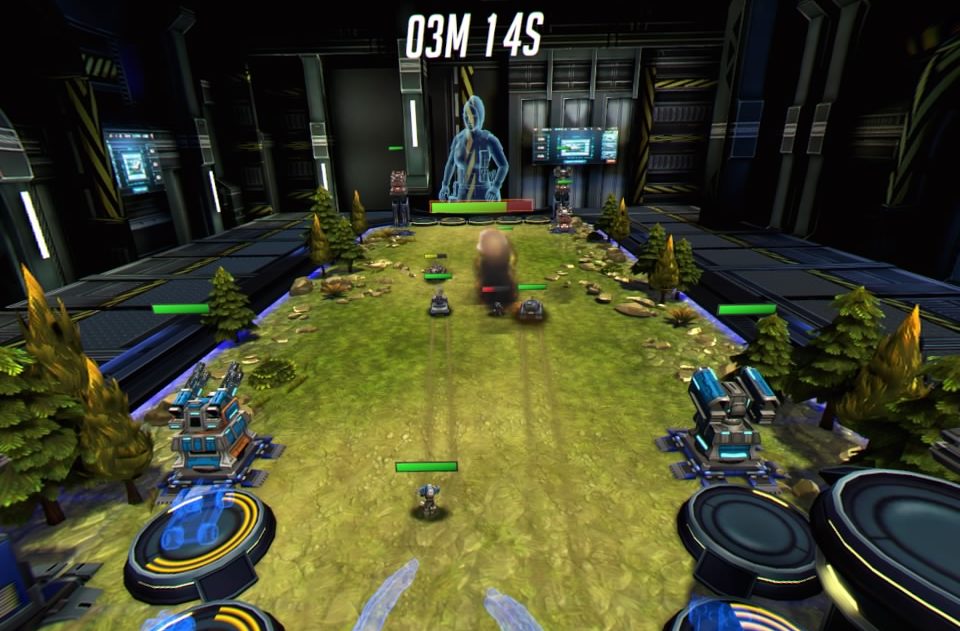 Death to the opposition!

2 Move controllers are needed here as you sit at the far end of war table/mini map.  Your base lies before you, and across the table lies the enemy’s.  Units spawn on 1 of 5 platforms, you pick them up with your hand, point them at a target or just let them roam free.  The key factor here is that once you let them go, you can no longer control them and you are left to just watch the carnage unfold while you wait for more units to spawn.  The only other control mechanic at play is the ability to rush a troop spawn by pressing and holding the trigger on 1 specific unit.  The counter to that is that all other unit’s spawn times freeze where they are at, so it becomes a mini-game in its own right to either be patient and get more troops in a bit, or rush one in the hopes it may save you from a dire situation and perhaps turn the tide in a losing battle.

Where the strategy lies is in the units you use and when to use them.  Each unit has its strengths and weaknesses, take infantry for example which is great against choppers, but weak against artillery and tanks while recon is weak against everything, but can cruise across the map very quickly.  Depending on what you are facing, changing up your tactics on the fly will be the only way to succeed.  The goal is to destroy the 4 towers that comprise the oppositions base, which results in immediate victory or defeat, but should the game go to the end of the time limit (only a few minutes) than the person who has suffered the least damage wins. 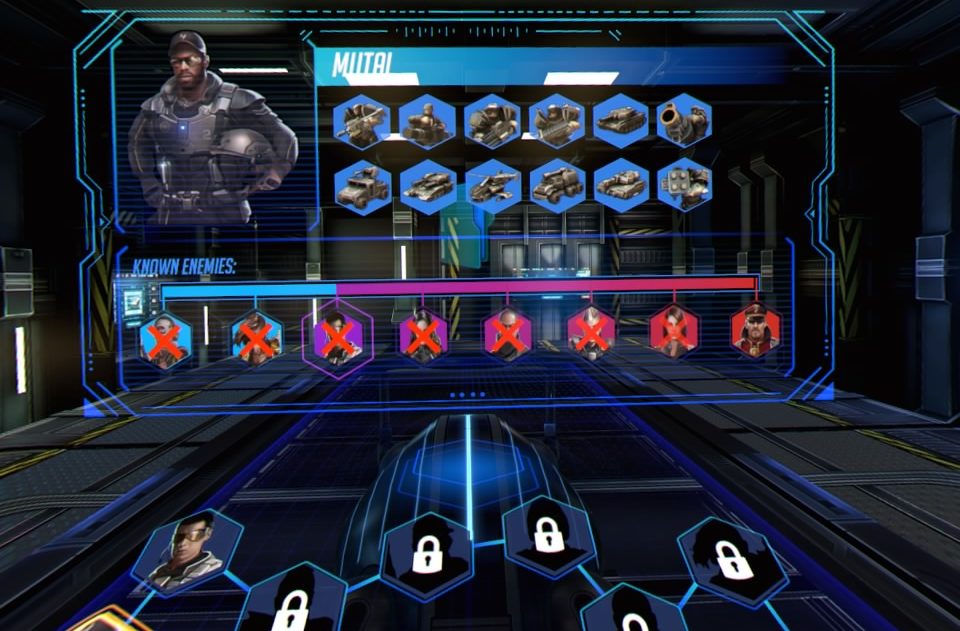 There’s a lot of levels to get through so get cracking!

The single player campaign is broken down into commanders, each with 8 stages to get through.  Each stage is against another AI commander whose tactics will differ from the last.  I crushed the 1st stage and thought this game was in deep trouble as I thought just swarming would win every time.  The 2nd stage put me in my place and I was defeated promptly.  There is a strategy and learning each unit’s positives and negatives will be the only way to ensure victory.  As you progress you unlock more troops, available both in single and multiplayer, but in the campaign, your army is comprised of pre-determined units.  Each stage will only take a few minutes with each character’s campaign only taking 30 minutes or so…unless you suffer more than a few defeats, which I did.

On the multiplayer side, it’s social screen only, and in case you are unfamiliar with that term, it means you can only play locally, with a 2nd player using the TV and a DS4 controller.  I love the addition of the local play, but not being able to play online feels like a huge oversight.  The simplicity of the game and mechanics themselves would seem to demand that online play would be present and yet…nope?  Playing against another human is great and crushing them is equally just as awesome, but having to invite a friend to come over isn’t always a readily available option at 10pm on a weeknight and I’m really hoping if this is a moderate success that the devs include online play in a later update. 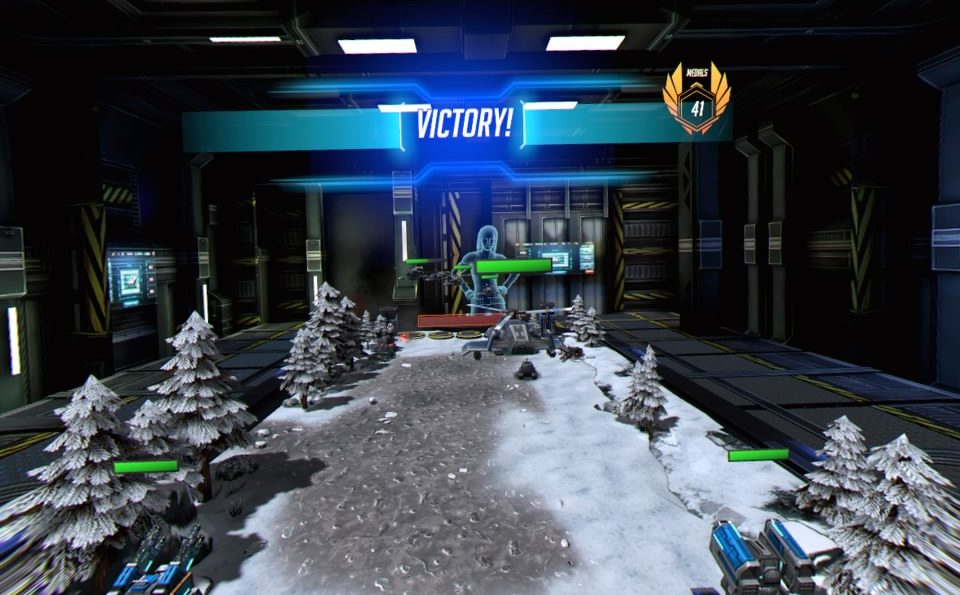 The game looks really good with some nice crisp looking menu’s and clear presentation.  The bulk of the game will be spent looking at the war table which looks great.  It’s like playing with little models, as if you were looking at a simulation of the real battle happening somewhere else.  The units all look fantastic carrying a ton of detail that is made even better by leaning in for closer look.  The environments you play in have no real bearing on the actual combat, but look awesome and include a snow-covered map, desert, grasslands and more.  I really loved the overall presentation here with enemy units exploding in glorious fashion and even with a whole bunch of units on screen, I never experienced any lag.  My one annoyance with the visuals is the enemy character models.  When you see their profile pics prior to battle, they look like some crazy characters, but once in battle, they look like poorly rendered ghosts from a bad horror game.  They are supposed to be holograms I guess, but given the level of detail on the rest of the game, it feels like someone just gave up on trying to get them to match that quality.

Showcasing its mobile origins, most of the ‘story’ is told through audio before a mission begins and there isn’t much in the way of it, just setups for the next stage.  Once in game, your opponent taunts you or just says some random lines about the battle, but they are random so while some comments may fit the goings on in game, some are just timed poorly and don’t match the action.  On the sound effects side, everything sounds perfect with guns, explosions and units all making appropriate noises, and I really can’t find anything to complain about.

As you proceed through the campaign, you accrue medals, which can be spent in the Arcade mode to unlock units for your own custom army.  The game does a poor job of explaining exactly how this works, but basically pick at least 6 units (or a max of 12 I think?) and your good to go.  If you pick more than one tank unit, than they will spawn in the order that you selected them.  Play against the AI or a friend and you can get more medals in this mode as well. 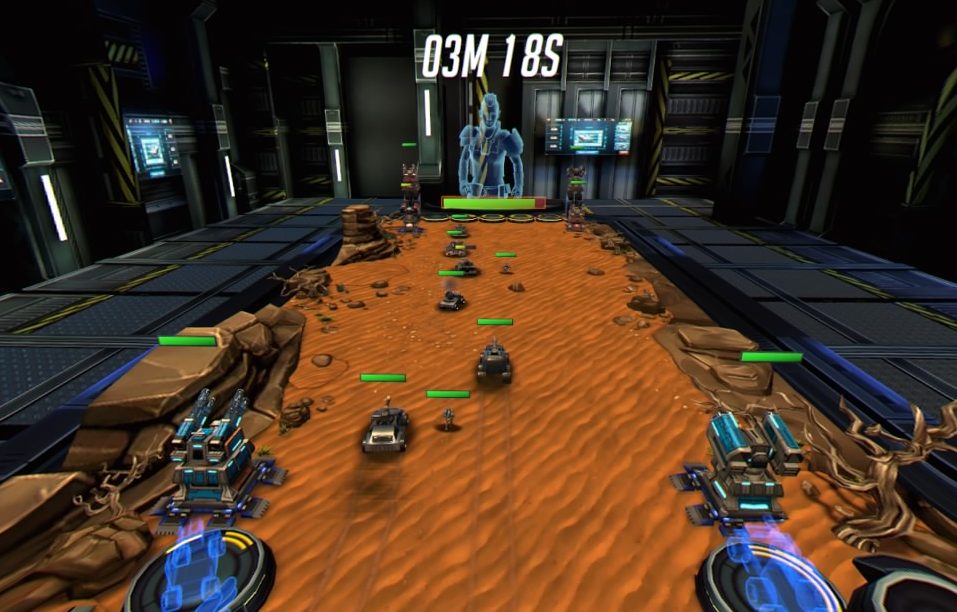 The different stages provide a nice change of scenery

I liked this game.  It brought me back my younger years when I played table tops like Warhammer 40K, and while this is no way as complicated as that, it’s still a lot of fun.  The levels are so short that failure barely registers as a loss as I just jumped right back in, tried a different strategy and pressed forward.  That said, the full campaign is a lengthy one with 64(ish) stages and the repetitive nature of the game had me bored after a couple hours or so of playing.  The biggest slight is the lack of multiplayer, which to me severely limits its shelf life.  I know the PSVR multiplayer scene is not the most bumping around, but that nature of this title pretty much demands online vs, and its absence is felt.  Still, if you are looking for a simple table-top RTS, you’ll probably still enjoy this.

What would I pay? $20 is fine ask.  There is a lot of content to get through and it’s fun plus the addition of local co-op is great.  That said, if you play these types of games to  show your dominance against others, the lack of online multiplayer may just kill this for many, regardless of the single player content.

Munkyfun Inc provided theVRgrid.com with a review code for this game and, regarldess of this review, we thank them for that!