Environmental puzzlers offer up, in my mind, a more immersive way to experience clever conundrums, in or out of VR, as the puzzles in question allow you to navigate through a world and make the player feel like a part of it.  Whether it’s flying through portals, guiding paper beasts across a landscape or transposing various versions of yourself to interact with each other at the right time, being directly involved with shaping the world around you just makes a game better.  Gravitational places you in the role a Sebastian, a paraplegic scientist tasked with repairing a reactor in a space station before it explodes. 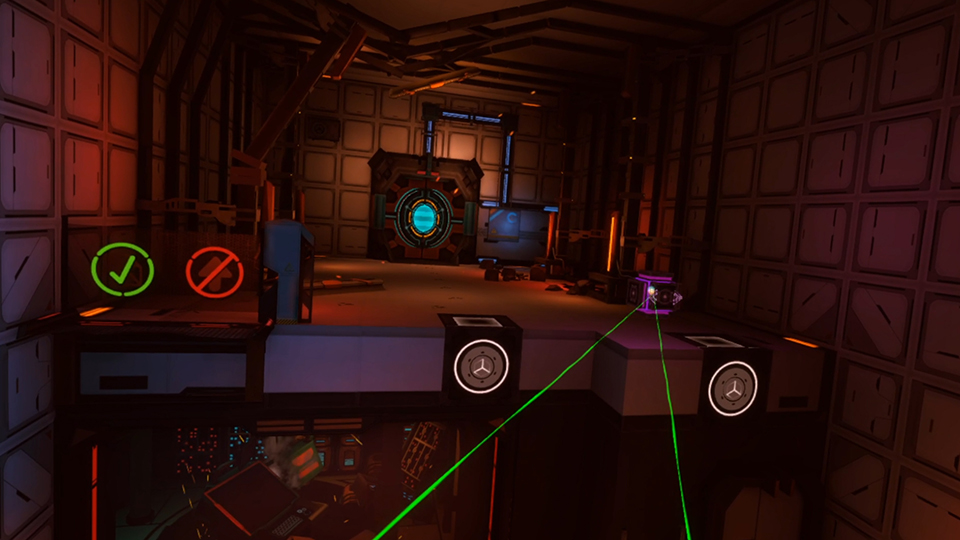 It’s all about moving and placing cubes!

As Sebastian lacks the use of his legs, you’ll have to move around the facility in a wheelchair which you can do by using your hands and grabbing the wheels, though I much preferred the virtual joystick which allows you to cruise around the facility with relative ease.  As the facility is in shambles, you’ll have to avoid debris and get through each floor, bypassing obstacles that aren’t so wheelchair friendly.  Each hand can spawn gravity guns (of sorts) that initially let you manipulate specific blocks in each stage that make bridges for Sebastian to move past large gaps in the floor.  These blocks behave in different ways based upon their color with all of them needing a power source for them to activate.  Blue blocks extend a power source to whichever sides are actively charged, red blocks extend out and make a 3-block bridge, green blocks can be pulled out of walls for some very lengthy sections and purple ones make a T formation and in order to get past each successively more challenging puzzle, you’ll have to manipulate the blocks provided to get to the door on the other side of the room.  On top of the blocks, you’ll have to move through zero-g sections that require you to push and pull yourself through them to platforms above or below you.  Lastly would be a late game circuit making puzzle that has you moving power to specific nodes on a large holographic circuit board.  Once you finish a puzzle, you’ll be brought back to a gravity elevator and continue to move upwards through the facility even though the reactor is apparently in the lower levels.  All of that sounds well and good and on paper, should be a solid puzzler but unfortunately, questionable gameplay choices constantly get in the way of the fun. 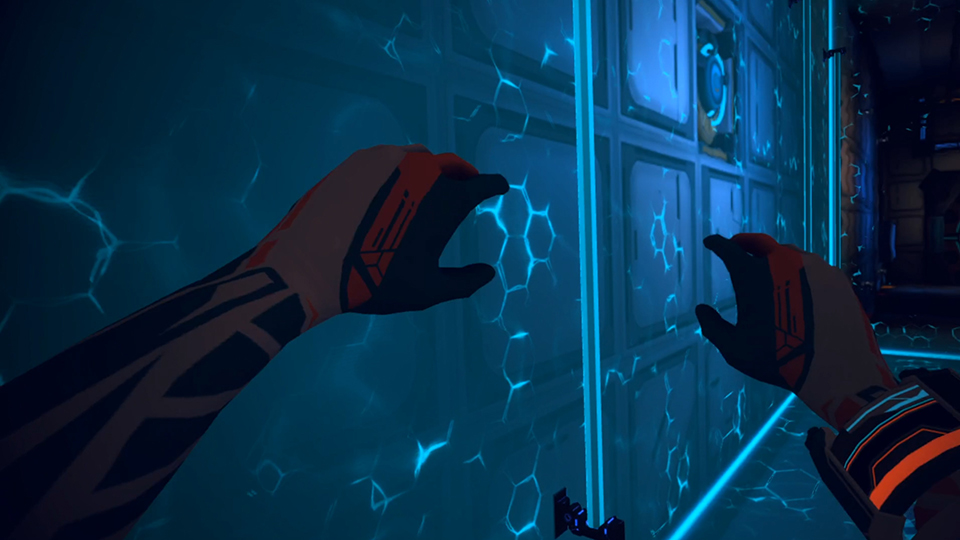 Despite the name, floating in zero gravity is a secondary mechanic

It’s clear the developers wanted to highlight just how it feels to navigate a world not designed for a wheelchair, and that’s fine as this isn’t the 1st game I’ve played that utilizes this type of locomotion and I can appreciate that desire to emulate the struggles of those with less mobile function.  Moving using the virtual joystick method is easy enough but I often found myself getting caught up on geometry or running into a little rubble forcing me to back up, readjust my position and get around said obstacle.  Not the end of the world, but there is currently no option to turn off the forced blinders when moving which was nothing short of intrusive.  If you lean to far forward, turn your head to much or if you don’t bring your body back to the standard sitting position, the game I guess assumes you fell out of your chair or something and respawns you nearby.  That is usually avoidable except when travelling in those zero-G sections where you lose the ability to turn.  It’s maddening to be able to grab handles with both hands but are unable to adjust your forward-facing position and if you reach too far out of the designated play area, are forced to reset and try again.  Said zero-G physics are also bare bones as you basically just end up pushing yourself from handle to handle to get to the other side and if you miss or toss yourself in any direction other than towards the next handle or floor, your left to float until you leave the area and respawn, oh and you can get caught up on geometry killing any momentum and forcing a manual respawn.  When it all works, it is satisfying, but when you encounter any issue, it’s nothing short of frustrating as odds are it’s the games’ fault and not the player.

Gravitational looks decent opting for the safety of a space station that allows for the recycling of assets so from the 1st stage to the last, you definitely feel like you are in a sterile facility.  That’s not a bad thing and with the facility in ruins, wall and floor panels may be missing, shelves and boxes will be tossed around, or busted machines may be spewing sparks so while it’s all a little samey, there’s enough changeups to keep the game from feeling to stale, except for those transition areas between puzzles which are nearly identical and force you climb up them the same way 15 times.  Sebastian has a full body in his wheelchair, which I always appreciate, and animates well enough save for when messages pop-up on his arm viewer which forced me to hold my arm up in awkward ways just so I could read them with ease.  Thanks to the emergency lighting in the station, levels are often dark allowing for the lighting to stand out with red & blue hues highlighting the environment while electricity shoots around below you in those exposed sections of each stage.  It really gave me ‘Portal’ vibes though does enough to make it stand out on it’s own and I really didn’t have to many issues with the visual presentation. 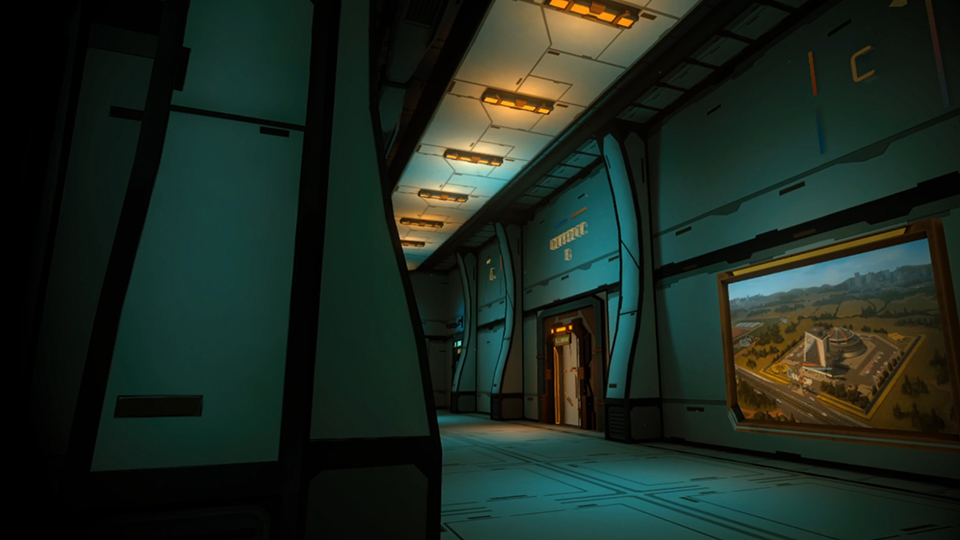 You’ll be cruising through a typically sterile science facility.

Some light ambient sci-fi inspired music plays in the background throughout the campaign and fits wonderfully with the puzzle solving action with other environmental sound effects all getting the job done.  The story is told through interactions between Sebastian and the facilities AI program ISA, who is based upon his deceased friend so there is some forced drama there as well as some memos found throughout the facility that highlight the difficulties of another differently abled worker.  The story is honestly very forgettable which I would say is largely due to the poor voice acting and conversational timing that was honestly a struggle just to listen to, let alone retain.

I enjoyed the block puzzles in the game, or at least I would’ve enjoyed them a lot more if I wasn’t constantly fighting the control choices.  If a block was too far to my left, I couldn’t just reach for it, or even look at it for too long, as the game would want to respawn me if I tried.  Every time I encountered a zero-g puzzle, I cringed as, if I didn’t push myself through it perfectly, I was forced to respawn and while I do understand that I am wheelchair bound and these tasks should be difficult, working around these limitations isn’t fun, which last time I checked, games should still be.  Those late game circuit problems are also horribly explained and feel tacked on compared to the environmental puzzles and while they aren’t too challenging once you know how to do them (shout out to you Bryan Paul) they basically devolve into basic math problems that also aren’t that fun. 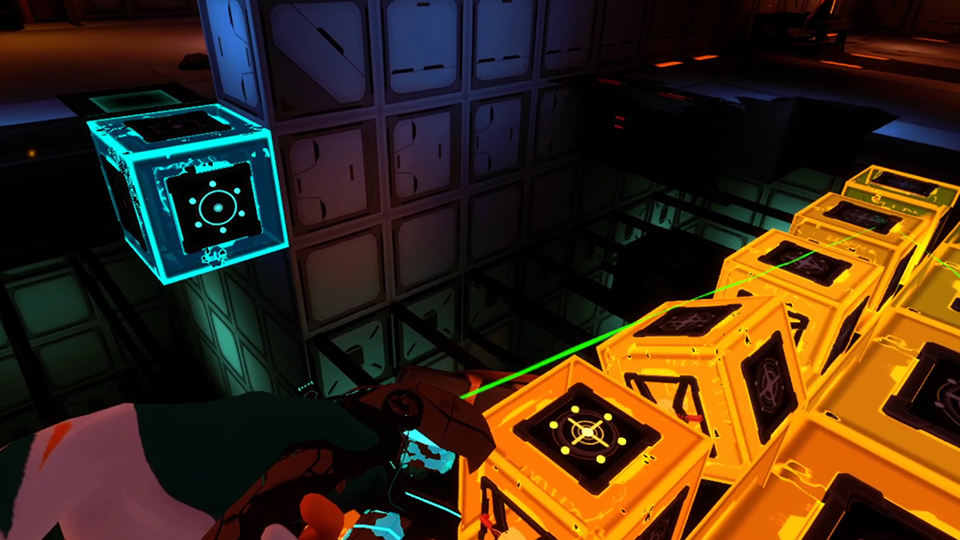 I like the core gameplay mechanics here, but their execution leaves a lot to be desired as the game ends up being more clunky and cumbersome than it should be.  When it works it’s good fun and solving those cube bridge puzzles was rewarding.  Unfortunately, almost everything else in the game wants to hinder your efforts making for a puzzler that’s probably just not worth the effort to play.

What would i pay?  This is $25 US which would be fine if everything worked smooth as the campaign, I think, would take anywhere from 2 to 3 hours to get through depending upon your puzzle solving skills.  Sadly, it’s anything but smooth and even if you are a puzzle junky, $10 seems better for this as this is just as much frustration as there is fun.

Perp Games provided The VR Grid with a press code for this title and, regardless of this review, we thank them for that!