I first played Table of Tales all the way back in 2019 upon its initial PSVR release and fell instantly in love with the presentation and Tabletop RPG gameplay.  Since that time, it as seen a release for PCVR headsets and has now arrived on the Quest 2 offering up not only the same single player experience, but a new way to play thanks to hand tracking. 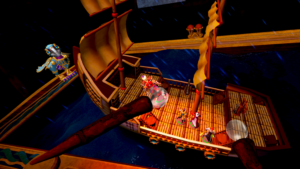 Taking a closer look is what makes VR so great!

The opening stage acts as the tutorial, breaking down the core mechanics of how to move, use abilities and magic and interact with the environment.  Said environment is laid about on an incredible table before you and you can either grab an interact with that table using just your hands or stick with using the touch controllers, the latter of which was my preference.  With the controllers, you’ll have a pair of digital wands, and every action is assigned to buttons, including resetting your position and accessing the menu.  With your hands, all those button presses are now mapped to hand gestures and unless I wasn’t interacting with the table, my resting hands would often trigger actions I didn’t mean to do and after messing around with that for about 10 minutes, I just decided it wasn’t worth the hassle…but it did feel pretty cool to grab at my little character models and pick them up.  With your 2 wands/hands you move your players around the map, a large 3D grid, and when in combat select from a few action cards assigned to them.  Those cards range from various attacks, defences & buffs with some specific actions like breaking down barriers or lowering a lever requiring additional rolls of some dice to determine success or failure.   Each character has a set amount of action points to be used and once depleted, their turn is over.  To perform those actions simply grab the card on the table in front of you assigned to that character, place it over them and release.  Throughout the campaign, you will unlock new abilities and increased attributes, though these only happen at story specific junctures.  Throughout the campaign you will be given choices that affect the games path so multiple playthroughs will yield not only new situations but new outcomes to the same situations as well.  One minor note would be the local multiplayer option available on the other headsets, which has been removed for this release as this is not tethered to a monitor or television, which is required for others to join in. 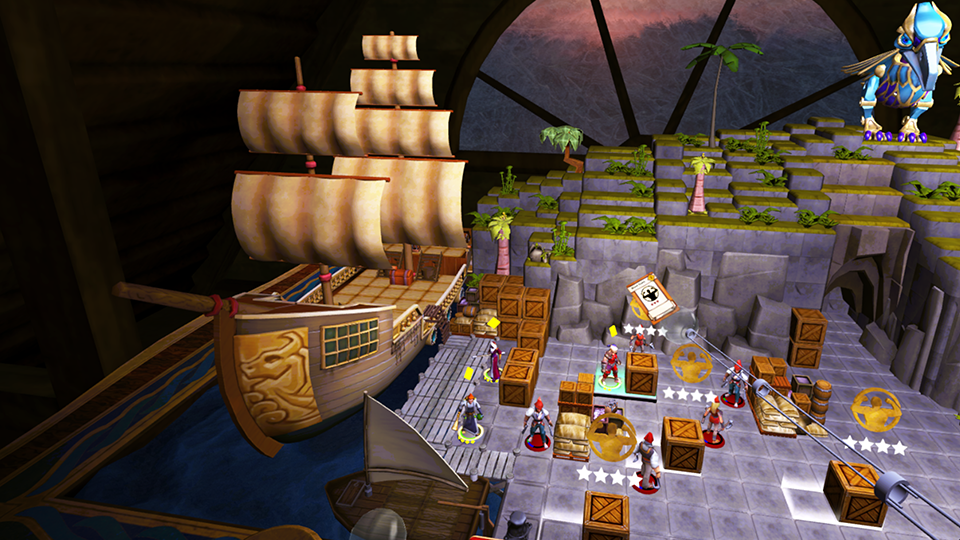 Strategy will be key in many encounters.

I praised the original release for its attention to detail and bright colors and while that remains largely intact here, some sacrifices have been made to get it to run on the standalone platform.  The Table before you is really anything but as it’s more like an AR surface, but in VR.  The table changes before your eyes, with stages appearing from one end and disappearing at the other, as if the play area were on a virtual treadmill.  As the environment is created, water may just appear, or buildings will pop up square by square creating a wonderful pop-up environment for your little figures to move on.  Your ‘dungeon master’ is an animated bird named Arbitrix who flies around the table describing and narrating the events in dramatic and storied fashion. Your heroes all look strikingly different thanks in large part to their varying classes and all stand on a circular platform, as if they were small figurines on a tabletop map.  They animate when called to action as do the different NPC’s you’ll encounter throughout the campaign.  One other little inclusion is the ability to pick up any character piece and place them on the tables edge whereupon their individual stats will show up, maybe highlighting a weakness in the enemy or reminding you about your own characters strengths and deficits.  Some textures & lighting effects have been reduced from the original release, replacing dynamic effects with static ones and rather noticeable foveated rendering is also present causing some areas to look lower quality than that same space just a little bit closer to your headset.  Despite those issues, the game still looks great and animates like no other VR game I have ever seen. 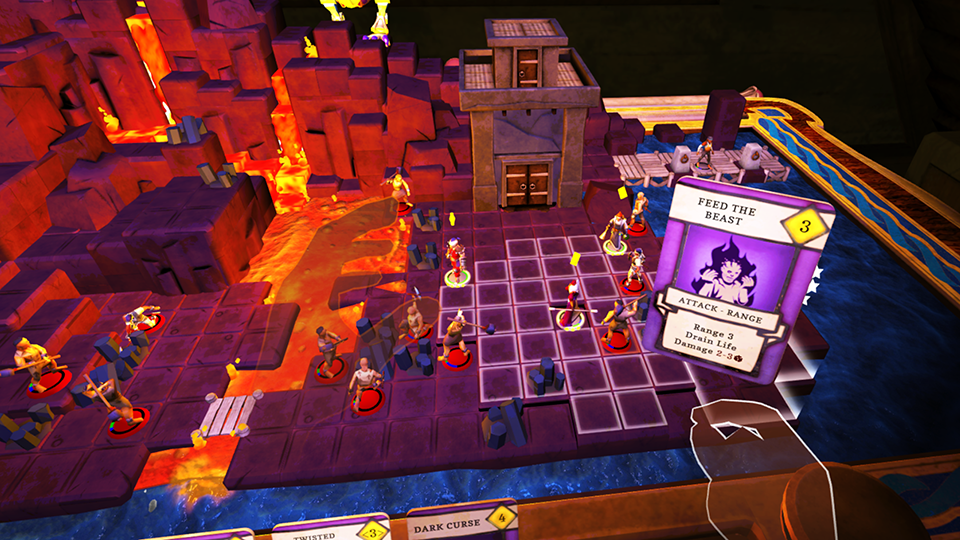 The hand tracking is fun…but finicky.

Your narrator is voiced by a talented actress, Julie-Ann Dean, who not only tells you the story and commentates on the action, but voices every character in the game, very much akin to the narrator in the Moss series and is a joy to listen too.  Sound effects are as they should be with a variety of musical scores accompanying the various scenes your rogue’s find themselves in, making for an overall very polished and joyful experience.

I enjoyed this immensely 3 years ago and had just as much fun now as I did back then.  The campaign has three difficulties to choose from with easiest being very casual while the hardest offers substantial challenge and requires much more strategy regarding characters specific abilities and the choices you need to make.  Those choices aren’t insanely deep but do warrant at least a 2nd play just to see what was missed on the first go.  Getting through the story took me around 4 hours so it’s not a lengthy game, but given the story, it feels like a complete and relatively satisfying tale.  You can only play through one campaign at a time and the game saves automatically as you progress so there is no going back to make different choices though should you fall in battle, Arbatrix will restart that encounter to let you try again.   I found the combat to be fairly balanced on medium difficulty, though a few encounters did frustrate me thanks to the very large number of foes in my way, but overall, I still had a great time diving back into this one. 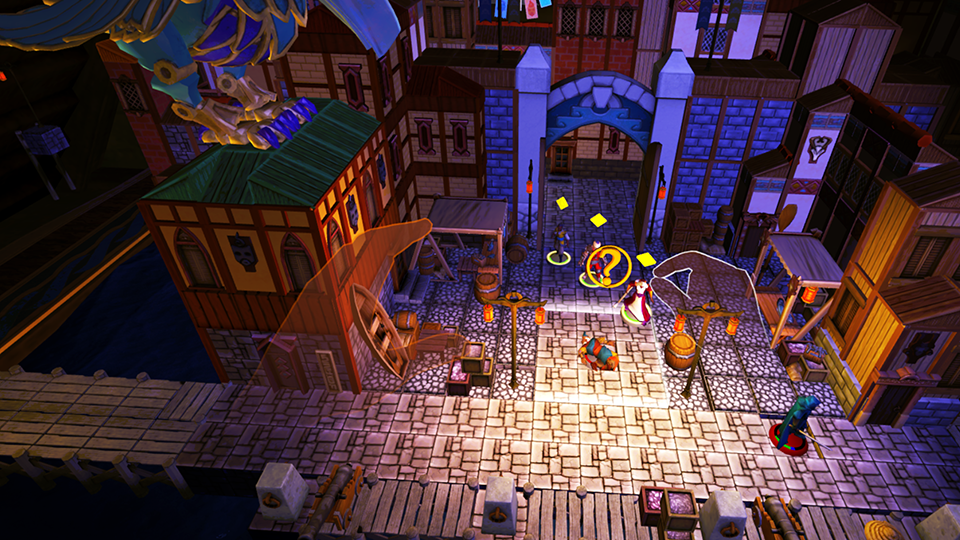 With Netflix’s Stranger Things bringing a fair bit of attention to Dungeons & Dragons, the re-release timing on this is solid as this is arguably one of the best representations of that game.  If you enjoyed Demeo but craved more story and a more fleshed out campaign than this should scratch that itch quite nicely and while you are playing alone, Arbitix is a great companion to carry you on this fantasy journey.

What would I pay?  The $20 asking price on this is way more then justified.  The gameplay is solid, the story is fun, and the presentation is a delight.  Now buy this so I can get a sequel…please!

Tin Man Games provided a press code for this title and, regardless of this review, we thank them