Swinging & grappling is getting to be a fairly common occurrence in VR games thanks to the instant and gratifying immersion it provides. In recent memory we have gotten games like Yupitergrad and Wolf & Pigs, both of which utilize that gameplay in different ways. Swarm VR is the latest in this sub-genre that tasks you with destroying hordes of enemy robot drones as they assail the planet by having you grapple and pull yourself through a series of arenas, destroying everything that comes your way while trying to avoid being killed yourself. 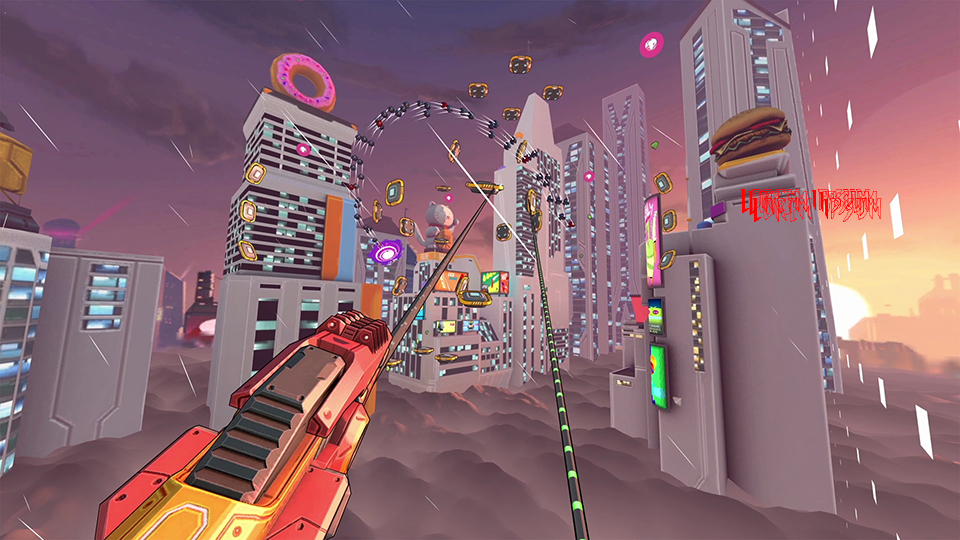 It’s all about grappling and shooting!

Armed with 2 pistols that can also shoot grappling hooks, you’ll play through a quick tutorial detailing the basics before you are off to defend the world from the encroaching invasion. Using the bottom triggers fires your grapples which can shoot infinite distance but need to hit floating platforms scattered throughout the arena or they’ll misfire. Momentum is key in propelling yourself in the direction you want to fly and after you latch on to something, you can pull your hands down, creating tension on the cable that will swing you even faster. It is in those gliding moments when you’ll need to dispatch the drones flying all around you, some are just for points, while others will attack you in a variety of ways from single shot lasers, seeking missiles, energy beams and a few more surprises. Despite the story, this is an arena shooter that’s all about chasing points so not only do you want to kill everything you can, but you need to collect shards dropped by your foes that boost your score so you can never really stop moving. As you advance through the stages, you’ll quickly unlock slow motion and “zip” abilities, the former of which is fairly obvious, with the latter letting you look at an enemy or platform and dashing toward it making it a very important ability as not only can you die from damage but touching the bottom of a stage result in instant death and this can offer salvation from both of those. Those powers need time to recharge, or you can fill them instantly by performing an aerial stunt, with your final advantages coming in the form of temporary weapons that spawn in the environment as well as health pick-ups. With 5 worlds to get to, each divided into 5 stages, and each of those taking anywhere from 2 to 10 minutes to get thorough the amount of game here might seem on the shallower side, but the challenge ramps up significantly in the latter half of the game meaning you’ll probably die a lot until you master all the games mechanics. 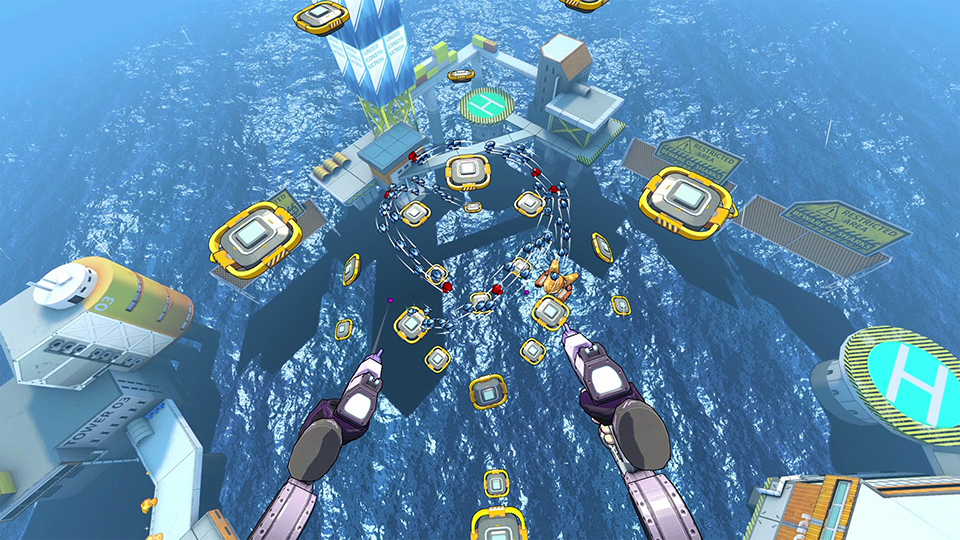 What goes up, must come down.

Swarm is a cell-shaded game which makes for striking and vibrant presentation that really pops in the headset. The arenas you are in aren’t overly large though have some decently epic verticality with each of the 5-worlds having drastically different themes. The opening stage has you above open water with some suspicious grey finned animals swimming below you. In the skies are your square anchor points with the enemies appearing via portal anywhere in the arena. Swarms of smaller drones will fly through the environment with red ones causing some small explosions and the blue ones just being target practice. Other drones come in a variety of shapes and sizes from smaller ones that try and chase you down to ram you and larger machines that fire salvos of missiles with mines popping up, laser touting orbs and few others enemy types that will keep you on your toes. Every world ends in a massive boss battle with each boss utilizing both unique and familiar attacks but on a much larger scale making for some harrowing encounters. A few of the worlds have additional obstacles that can really screw you up like a huge swinging bell in world 2 that careens back and forth and can knock you in any direction if it connects or lasers in the final stages that just add to the madness of those levels. Comic book style cut scenes elaborate on the story in between worlds though really felt tacked on and do little besides establishing the next world and setting up the final boss battle.

It’s all about the gunplay and the sounds of exploding robots with all this happening to an eclectic soundtrack with some melodic tunes, electronic beats and even a rap song sprinkled in for good measure. The soundtrack is so dynamic it’s hard not to notice it, but it fits the action nice enough and never detracts from what you are doing. All the effects are on point and while there is 3D audio in here, the shear amount of chaos happening at any given time makes it damn near impossible to tell which direction it’s coming from but that doesn’t really matter as you’ll be to focused on shooting and evading to take time to take in your surroundings save for those moments when you are as high as you can soar and the only direction of play is below you. 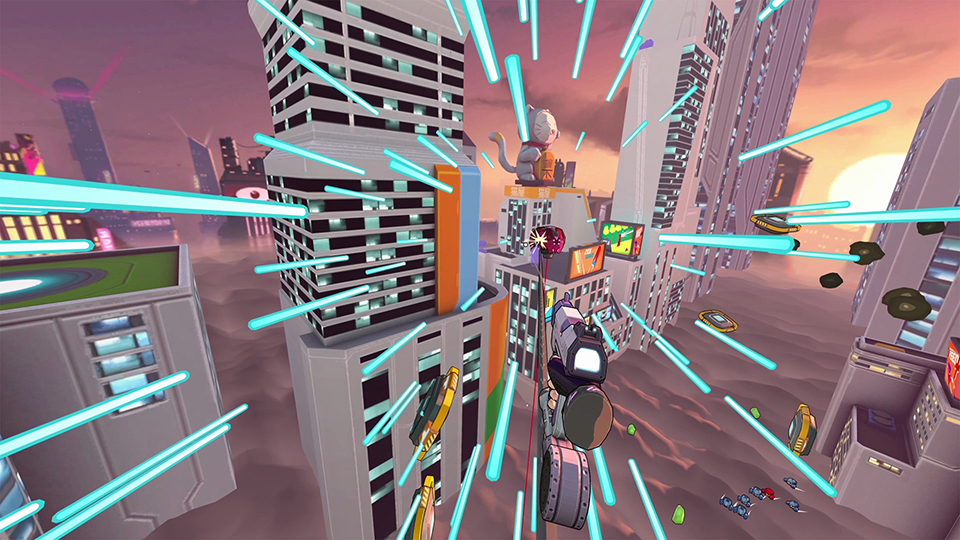 The zip ability is a life saver…and death dealer!!!

For those of you who played Airborne, I likened that game to being a Superman sim with guns. Given that description, I can’t help but feel this a Spiderman sim…but with guns. Not knowing what this was before I played it, I was taken aback by how small the arenas are given the style movement in here, but it works quite well and keeps the action flowing nicely. Each stage has bonus missions for more points with online leaderboards offering a reason to return to past stages though if you don’t care about score chasing, there is little reason to go back save for completing those objectives. Those bonus weapons offer some significant firepower, but I ended up avoiding the grenade launcher and 1 other as I found them to be more cumbersome than they were worth. Some of the stages can be maddeningly hard and that’s not a bad thing as the stages can be over so quick that replaying them is an easy ask. Basic comfort are option available with click or smooth turning as well as blinders though the best way to play this is by utilizing the untethered Quest to it’s fullest and turning in the real-world. I also found the protagonist to be a tad annoying as his cocky bravado was just a bit too much, coming off as more irritating than charming. Those scenes were so short that this is a very minor issue and once the action kicked in, I soon forgot about any of my misgivings in favor or trying to survive and maybe climb those leaderboards. 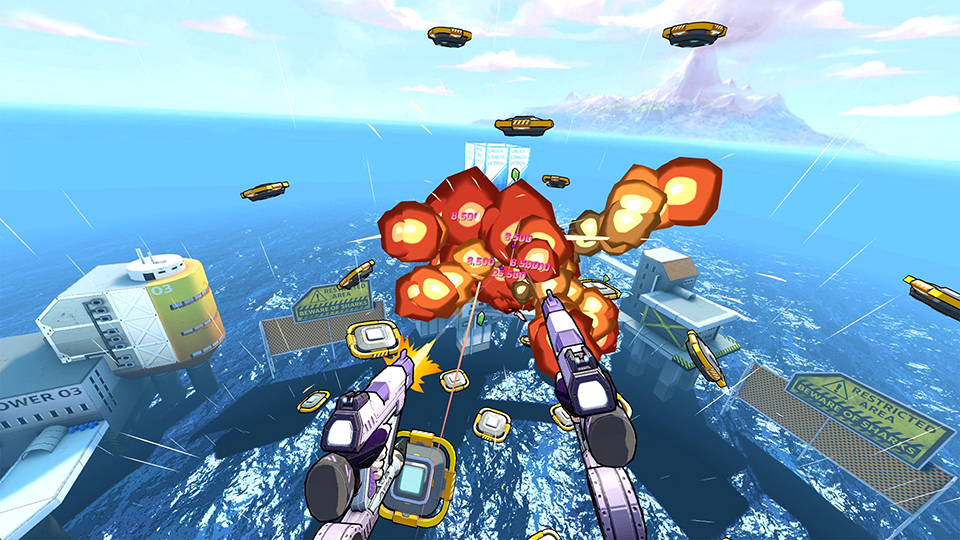 Swarm is a lot of fun and has an addiction factor that few games have.  It’s all to easy to just want to try one more time to finish a stage or to just best your previous efforts.  On top of that, when you are kicking ass it feels like your kicking ass and it’s hard not to feel like a gun wielding hero, saving the world in style!

What would I pay? The value in this lies mainly in replay factor and your drive to replay stages to get those top scores.  I’ve said it many times that I’m just not the score chaser type, but I’ll be damned if I didn’t find the gameplay in this one addictive.  For that reason and just how refined the action is, I’m cool with the $25 asking price on this.

Greensky games provided a press code for this title and, regardless of this review, we thank them for that!