Sunken is a very simple VR game.  The premise is that you are an undersea diver exploring a sunken ship in search for treasure.  It’s a find ’em game that tasks you with locating “random” items scattered and hidden around 1 of its 3 stages.  The addition of navigation and the ability to interact with some objects separates itself from other games of this ilk (like Wrath of Loki), which have you just spinning in a circle to find hidden items. 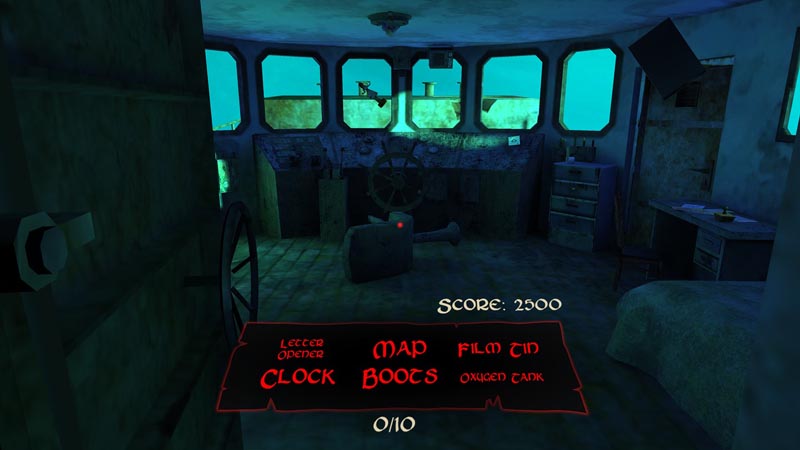 The visuals are nice all throughout the game

With only the touchpad supported, your controls are very simple; to ‘find’ an item or interact with an object, just look and tap.  Navigation around the map is effectively handled the same way only you just look at the ground to bring up a foot icon, tap the touchpad and boom, instant teleportation.  With a few items being hidden in drawers and other containers, and each stage expanding upon the last, to find items promptly you’ll have to master this mechanic and memorize where items are.

The 3 stages all take place in an old sunken ship, but still from the modern age.  The opening stage is the cabin, a small area littered with items, some in plain site, others in drawers and 1 or 2 just floating in the deep.  I was impressed by the visuals offered here; everything is crisp and clear the amount of ambient environmental stuff is also a welcome addition.  The game features a swimming shark, some fish, a whale and a few other animated ‘things’ that bring a welcome sense of immersion.   As you advance and more stages open up you get to see well, more.  The ship is filled with a wide variety of historical artifacts and extends the entertainment value nicely.

Starting off on stage 1, a list appears before you with the items you need to find.  Easy enough, look around the room, open drawers and find them.  Sunken contains a score mechanic that rewards you for finding items as fast as you can.  Once you locate a needed item, a timer counts down giving you a few seconds to find the next and if you find it before the timer runs out, you get a multiplier added to your score.  The score is needed to unlock badges (4 per stage) and after you get a badge or 2 in a stage, you unlock the next one.  While stage 1 is the cabin, stage 2 is the cabin and hull and stage 3 adds the rear section on top of those 2.  This makes compounding scores more difficult as you may be walking around the ship to find all that is needed. 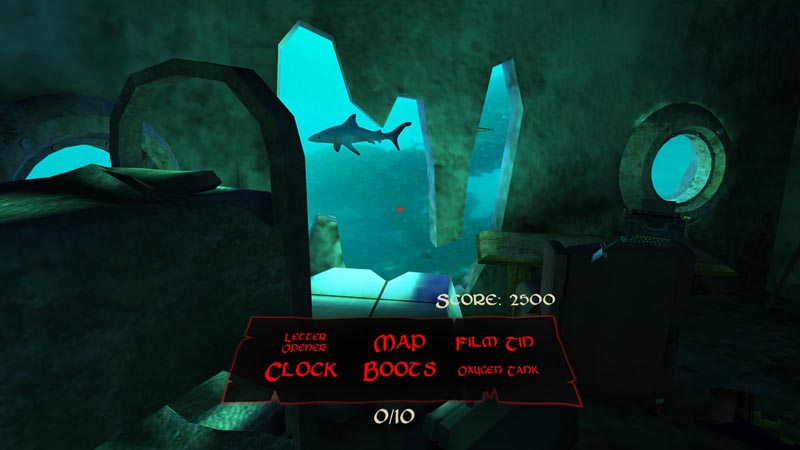 The ambient effects are prettly cool

While it initially appears to be just a finding game, it soon becomes clear that this is more about memorization.  Items never move from there set position, so proper planning is key to maxing your score.  When you item list pops up it shows you many (but not all) of the items you’ll have to locate, but your not timed on how long you spend in a level, so you can pre-plan by opening containers and setting yourself up in a good position to find the most items in the least amount of time.  This is ultimately the games biggest strength and equally its biggest flaw.

While the challenge of memorizing levels is fun, to unlock all 4 badges on all 3 stages just gets boring.   Each badge level requires more points than the last to advance, but because of the nature of the stages it becomes harder and harder to link up score multipliers as you must teleport all over the ship.  This means you’ll be playing over and over doing essentially the same thing every time just so you can unlock the next badge, which just requires you to do even more than you did previously.  Each stage contains more objects than you are required to locate in one play, so multiple playthroughs do mix up what you are supposed to find, but that still only takes you so far and I was just bored of this game way before I unlocked even half the badges.

That’s ultimately the biggest flaw here, Sunken doesn’t know when to quit.  Its a fun finding game and the efforts required to unlock all the stages were enjoyable, but once that happens, you are just required to play way too many times and what was fun just becomes and unrewarding slog.  My second issue is that there were a couple items identified by verbiage I didn’t recognize, forcing me to tap on everything until that item was found…I had no idea a ‘Lupe’ is a magnifying glass for example.  A minor annoyance, but it happened more than once so it’s worth mentioning. 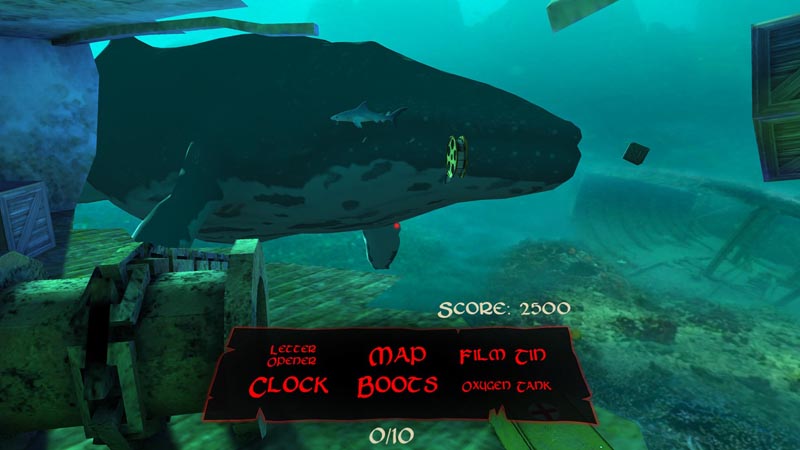 Believe it or not, you may tasked with finding this little guy.

This is a fun and solid ‘locate the hidden item’ kind of game.  The addition of both movement and interactive stages set this above many of its competitors.   If you are looking for a more laid-back experience or want to show kids something in VR that is a little more youth friendly than this will do just that.  All that said, if you don’t care about scavenger hunts, than this isn’t going to do much to remedy that.

What would I pay? $2 is fine.  It will kill more time than you think it would and by the time you get burnt out on playing, you won’t feel ripped off

Tapps Games provided theVRgrid.com with a review code for this game and, regardless of this review, we thank them for that!