Symphony of the Machine is an innovative atmospheric VR puzzle game taking place in a very picturesque canyon.  You must ride an elevator to the top of a tower, where you can control the weather by shining lasers at specific objects that I call control nodes…I have no idea what they are actually called. Controlling the weather, you can motivate small potted plants to grow which as it turns out is the objective of the game. 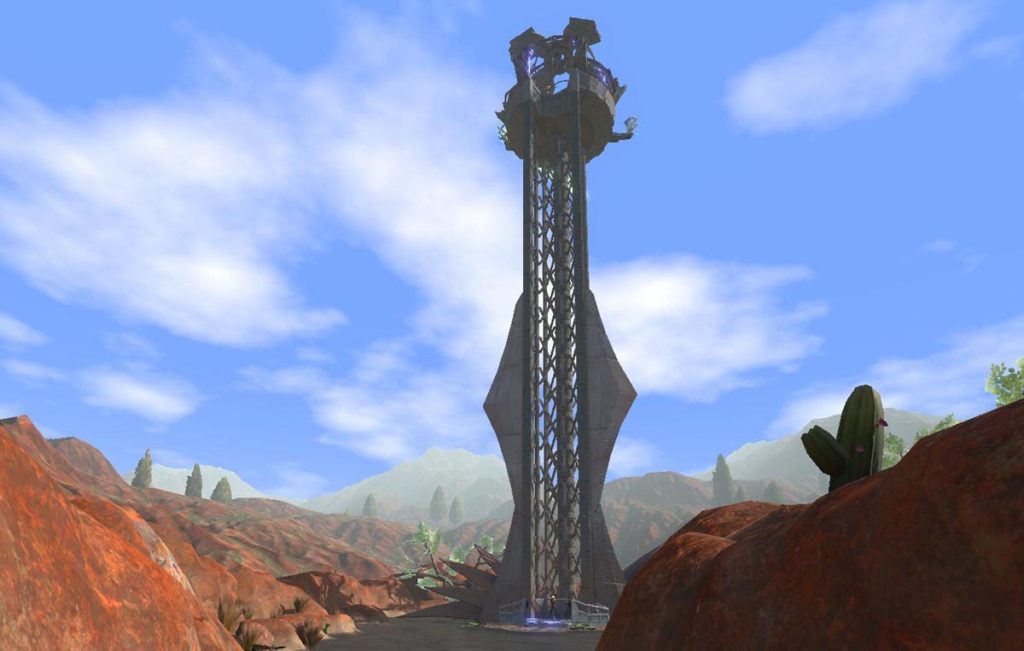 And so your journey begins…and in about an hour, ends.

In a unique but understandable way, you are given one laser that you must split and/or redirect to shine on any combination of four elemental control nodes (light, air, earth, and water). Initially, you are given a reflective mirror and a pipe. The mirror can be carefully positioned to reflect a laser to exactly where you intend on sending it, and the pipe can be used to split the beams. You are also given a fire plate and an ice plate, which can be placed in front of a laser to modify the weather effects further.

The game’s best attribute is its atmosphere. Every aspect of the environment is gorgeous. Even before entering the tower, you are met with vibrant cave paintings and a beautiful valley. Seeing the tower and its immense size gives you a breathtaking sense of scale. This is one of the only VR games I’ve played where I physically sat on my couch, just taking it all in, because of how relaxing and beautiful the environment feels. The plants you grow are nice looking, and watching them slowly grow because of your actions feels satisfying. The weather is the icing on the cake: when you modify weather nodes, the actual weather around the tower changes accordingly. Any type of weather, from thunderstorms, to blizzards and sandstorms can be created based on your combinations. They are animated very well and feel convincingly real in VR. I had fun witnessing the chaotic storms that my weather combinations would create, even ignoring the objective to do so. 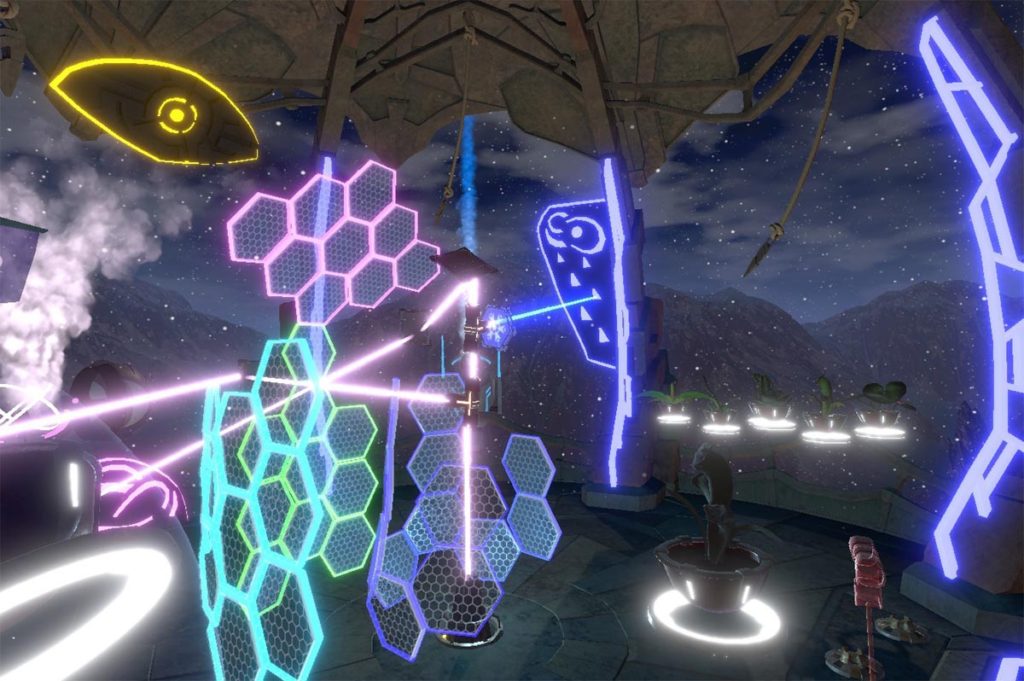 The game’s user interface works almost perfectly, running at a smooth frame rate with no noticeable glitches. Everything feels consistent, the mirrors reflect lasers accurately, and the game plays exactly how you’d hope it to.

The only major interface gripe I have is the movement system: even despite its lack of smooth walking locomotion, the teleportation is mediocre at best. Instead of holding down a button and letting go, you must press the trackpad- aim- then pull the trigger. Locomotion like this makes sense in linear stealth games like Budget Cuts, but here it’s just cumbersome and annoying. It doesn’t help that you’ll only ever need to travel a meter or two using the locomotion, for grabbing tool pieces that are just out of reach.

This game suffers from one major issue, and that’s its lack of content. I took my sweet time during my first playthrough, relaxing in the scenery and thinking through my puzzle solutions. By the time the credits rolled, I had exactly 60 minutes logged into the game. One. Hour. You are led to believe there will be more towers later on- different environments, different weather, or perhaps different puzzle elements. But when you take the elevator down from the first tower, the credits start rolling. My jaw (literally) dropped when I realized how prematurely they concluded the game- I wasn’t expecting something long per say, but I closed the game feeling like I just completed a free demo. For a game retailing $20, this is unacceptable and ridiculous. It’s not even listed as “early access,” implying we can’t expect any content updates anytime soon (if ever). 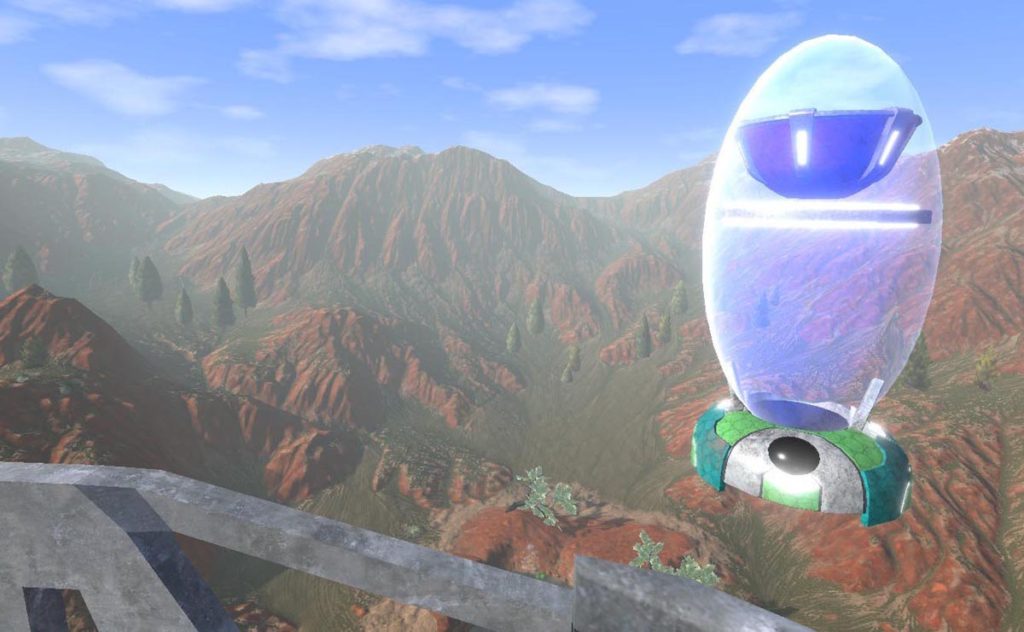 This game’s environment is beautiful. It’s just a shame there isn’t more of it.

In the game’s defense, taking the elevator back up to the tower after beating the game yields an “endless” mode, where plants (and the climate-altering steps required to cultivate them) seem to be randomly generated. Grown plants can be placed to the side, in a nook resembling a display rack. This can eventually become satisfying and even beautiful when you’ve cultivated a miniature greenhouse of cute and colorful succulents. This endless mode prevents the game from becoming totally repetitive, and I will likely be revisiting the game in the future for this reason. However, this doesn’t save the game from its shameful content-to-price value.

What would I pay for it?  In its current state, only because of the inclusion of endless mode, I’d pay no more than $10 for Symphony of the Machine. If it didn’t have endless mode, I’d hesitate to suggest this game at even $5. At its core is actually an excellent puzzler, it’s just embarrassingly low on content.

Stirfire Games provided theVRgrid with a review copy of this title and, regardless of this review, we thank them for that!