Separation is, at its core, an open world exploration/puzzler that tasks you with completing a mysterious circuit for reasons that aren’t initially clear.  There is no explanation for your presence on this strange world save for a strange voice that whisper at you, pushing you towards an unknown goal. 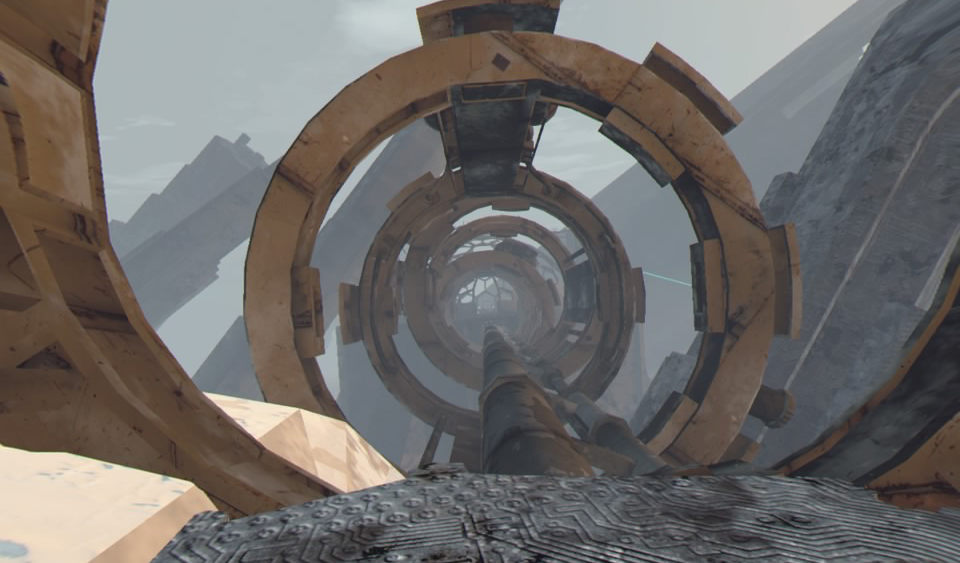 Their are many striking moments in this game.

The DS4 is your only control option and unfortunately while you can freely roam the map with the thumbsticks, at the time of this review, it’s click-turning only with a slider in the options menu to adjust its sensitivity. Beyond that, all interactions are handled by looking at whatever you want to interact with and pressing ‘X’.  Depending upon what you are trying touch, their may be additional options be it ‘left’ or ‘right’ on a wheel or dragging items around a room to solve a puzzle.  It’s a simplistic control scheme reminiscent of mobile ports, very similar to what we saw in Eclipse: Edge of Light released earlier this year and can be cumbersome at times but once I got used to the controls, it became easier to avoid the control issues.  Another issue to bring up would be that the direction you move is also mapped to your head which can prevent just looking around while you move as you’ll start walking in the wrong direction. Throughout the 5-hour campaign you’ll also find items that reveal the worlds histories as well as ‘sorrows’ which are remnants of the population that are all somehow tied to the whatever being is still in charge of this mysterious place. 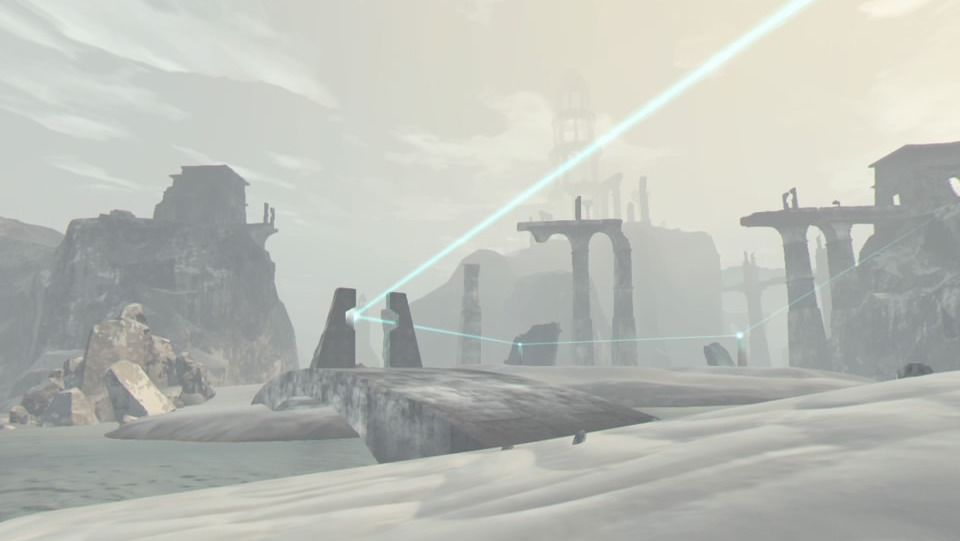 At first glance, Separation isn’t a visually impressive game. By no means does it look bad but opts for a quantity over quality look with the draw distance in here being near endless and showcasing monolithic structures on the horizon but up close, textures look flat and lower quality with much of the hills and rockfaces you walk past being little more simple geometric shapes stitched together to create said objects.  At the center of your vision is a small reticle that also acts as a source of light when the game gets dark and once you see it action, shining it against any surface, new details appear adding a great sense of depth to what initially looks like very flat geometry.  The setting is seemingly post apocalyptic with the ruins of an ancient civilization surrounding you on your journey and the further you get, the crazier stuff you’ll see.  When the game 1st loads, everything looks desolate and barren but once the sun comes out and lightens everything up, colors pop a little more and I really appreciate the active day and night cycle which added a nice sense of realism to the game.  The developer’s inspiration comes from the PS2 classic ‘Ico’ and the 19th-century German Romantic landscape painter, Caspar David Friedrich and the loneliness & desolation from both of those works is readily apparent.  The art style in here is solid, but you might not see it or appreciate at first glance as the game really is a slow burn when it comes to just about every aspect of it.

Whatever faults this game may have, sound design is not one of them and as a guy who doesn’t really care too much about the audio side of things (if it works, I’m happy) when something stands out to me, it has to be good…right?  Reminiscent of last years Golem, Separation carries with it a soundtrack that is haunting, inspiring and relishes in subdued grandeur.  No matter what surface you travel upon, the sounds of your footsteps sounds appropriate & echo across the barren landscape.  When the soundtrack kicks in, typically after large events or revelations, it adds so much emotion to those moments you just get lost in this world.  Shout out to the music composers on this one, Vector Lovers, as they absolutely nailed the soundtrack out of the park!  The being guiding your quest talks to you via on screen text as unnerving whispers play in your ear and I haven’t said this in awhile, but if you play this you NEED make sure you are playing with headphones on for full effect. 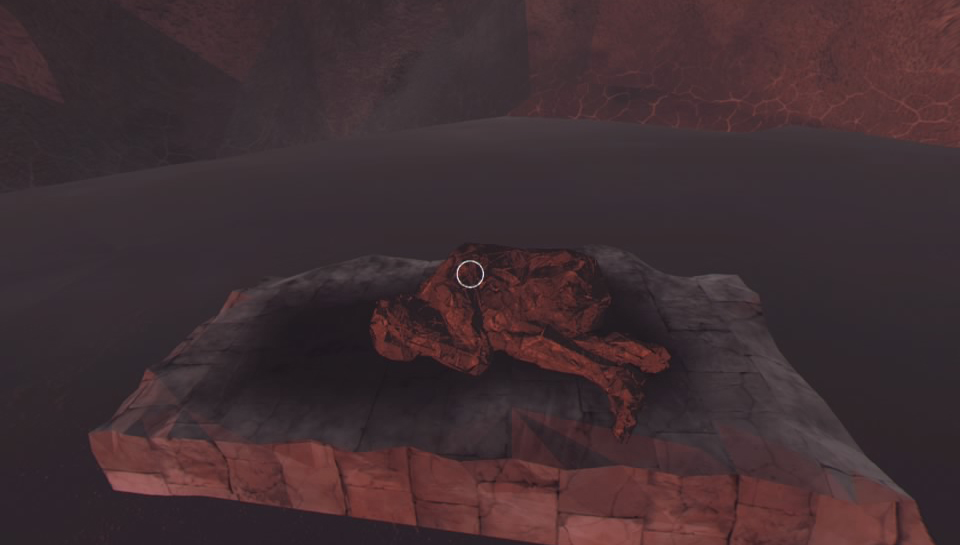 Sorrows are key in unraveling the mysteries of this world.

Separations largest flaw is its initial impressions which are…lacklustre.  It takes a little while to appreciate the art style and visuals and the lack of storytelling had me questioning my purpose in this game.  I didn’t have any clue where to go or what to do save for just exploring until I found a crank to turn or an elevator to ride.  It wasn’t until I found the 1st sorrow that the game started to pull me in.  Once you discover the boat, the world opens up and the difficulty increases largely due to the open world nature of the game.  For the most part, it’s easy to tell what you need to do next but twice in my play, I was lost; once due to a glitch that was fixed by reloading my last save and the second was when I had to move well past the current puzzle to find an item needed to solve that obstacle.  The story, as I mentioned, is also sparse which was intentional by the developer as he wanted to let the player fill in the gaps when it comes to the narrative.  I am typically not a fan of that direction but in Separation, it works, thanks in large part to its roots in depression.  That’s not to say the game is depressing as wandering the landscape and taking in my surroundings became a treat unto itself and the attention to detail here is actually quite impressive. 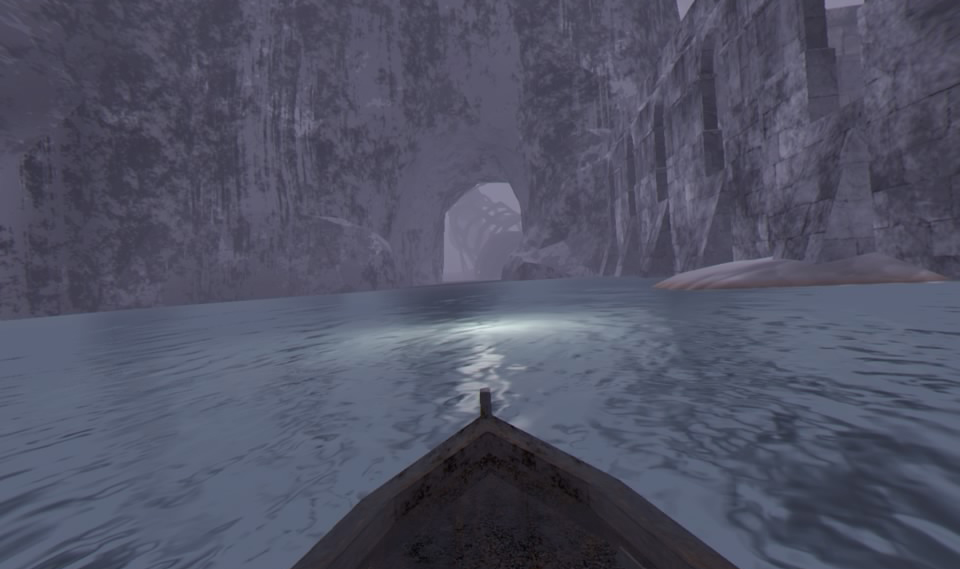 Wanna go for a ride?

I didn’t quite know what to expect from Separation and it delivered something very unexpected.  It’s a solemn and lonely journey through a barren world that takes a while to get going.  Once the game hooked me though, I couldn’t put it down and while it may be light on story, the ending shocked me in a good way.  If you are a fan of games like Eclipse or Solus Project then this is something similar to those games but delivers an entirely different type of puzzler.

What would I pay?  I’d be ecstatic if this was $20 and the fact that this is releasing for only $15 makes me highly recommend it.  It’s a lengthy and engrossing game with some clever puzzles set in a strange world with some beautifully haunting visuals.

Recluse Interactive provided The VR Grid with a press code for this title and, regardless of this review, we thank them for that!