Seabed: Prelude, may be one of the most unique games I’ve played in a long time. Cruising through the ocean in a retro-steampunk submarine, the game lets you live out your fantasies of a hook-handed pirate who loves to play the piano.

The gameplay in Seabed is really quite simple. Selecting one of several classical or folk songs, your submarine flies towards a pattern of exploding, multicolored mines, which are sequenced to the tune of the song playing. These mines can be safely detonated by pressing the correspondingly colored key on a piano. On a separate but simultaneously visible screen, there is a moving row of colored musical notes that pan along with the song in question. This can be read alongside the piano in a way similar to Rock Band, which may make the game easier. This baseline gameplay can be quite fun. Although not musically perfect, it can be satisfying to complete a song in a way that feels like you’re truly playing it on a piano. 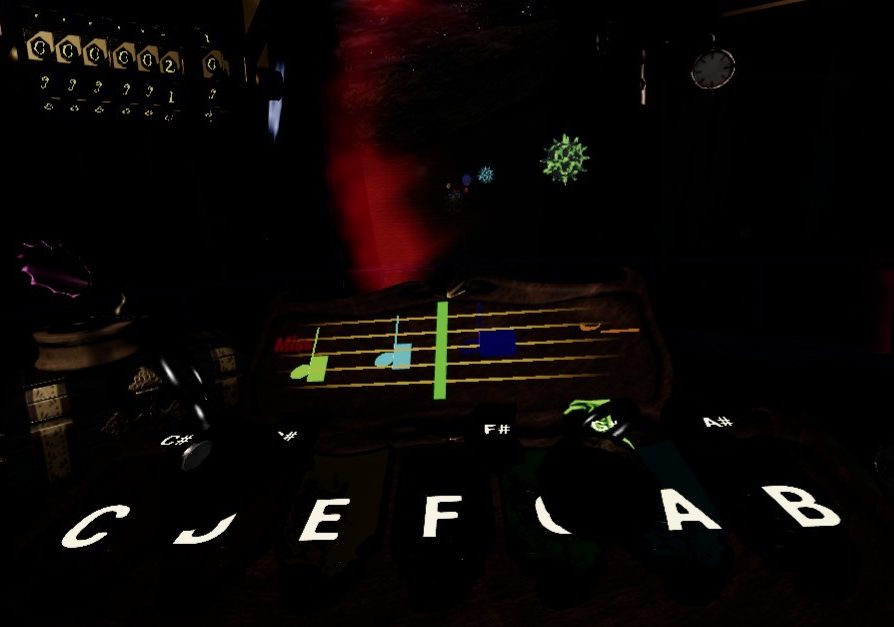 You are given a wide variety of difficulty options, represented by a speed throttle next to the piano. However, even at lower difficulties, Seabed can be excessively- even overwhelmingly- difficult and stressful. When you miss a note in most music simulators, you skip to where the song picks up following your mistake. In Seabed, you’re required to play every single note in sequence. The piano doesn’t even emit sound when you press the wrong note. Therefore, if you miss a note, you’re thrown off and essentially screwed for the whole song. It doesn’t help that Seabed also has no real medium difficulty; Under a certain difficulty, the game becomes far too boring, slow, and easy. When increasing it just a little bit, the difficulty takes a spike and becomes damn-near impossible. Worse still: since the game pairs the mines you’re flying towards with individual musical notes, changing the difficulty makes the music sound worse. When you speed up (increasing the difficulty), you’re actually increasing the speed at which the song is played and vice-versa. This not only ruins the game’s difficulty, but also totally butchers the songs that you are trying to play.

Included are two instruments: A Casio kid’s toy piano (not literally, but that’s exactly how it looks), and an electronic device composed of several laser beams that feels like a combination of a harp and an abacus. The two feel remarkably different from each other, each requiring different hand movements and play styles. The problem is that the two instruments sound the exact same. They look and feel different, but the electronic harp-thing makes piano sounds, which feels ridiculous. Why would you have two different “instruments” if they make the exact same noise?

Seabed has excellent graphics and environmental design, fitting right along the same aesthetics of Bioshock. References to 1950’s imagery mixed with steampunk, pirate, and underwater themes work well. Breathtaking swaths of ocean life swim past your submarine’s dashboard, which adds to the game’s vibe. It’s just a shame that these environments and visuals are so limited in nature. Your ship’s cockpit is the only environment you’ll be prolongedly seeing.

Seabed takes pride in a second game mechanic: drone exploration. At the end of every level, you are given the option to pilot a drone using your trackpads, viewing it in third-person on a 2-dimensional screen, giving the illusion of a remote-controlled drone. Here, you’re intended to explore shipwrecks and find relics that contribute to a backstory. These can involve newspaper clippings and shiny treasures, neither of which are remotely interesting. Treasures appear to be polaroid photos of Google stock images, and news clippings are neither legible nor written with coherent grammar. Between levels, the environments of the shipwrecks barely change. Worse still, in all but one or two of these levels, my drone glitched and could not even detach itself from my submarine.

Not only are the drone segments a chore, but they’re responsible for game-breaking performance issues. During the musical segments, which comprise the actual marketed “game,” it runs almost perfectly and maintains playable smoothness. During the drone segments, however, I damn-near vomited on multiple occasions from how nauseating the lag was. It repeatedly dropped below 20 frames per second, which is unacceptable and resulted in my computer periodically freezing. It’s likely not my computer’s fault: Including many graphically superior games, this is the very first VR game I’ve ever played that caused any debilitating lag. Yes, I understand that this is a very early access game, but that excuse would only lend itself to the drone segments being fun albeit broken- in their current state, they’re neither fun nor functional. Fixing the devastating lag would be a start, but altogether removing or replacing the drone sequences is necessary for this game to even be tolerable. 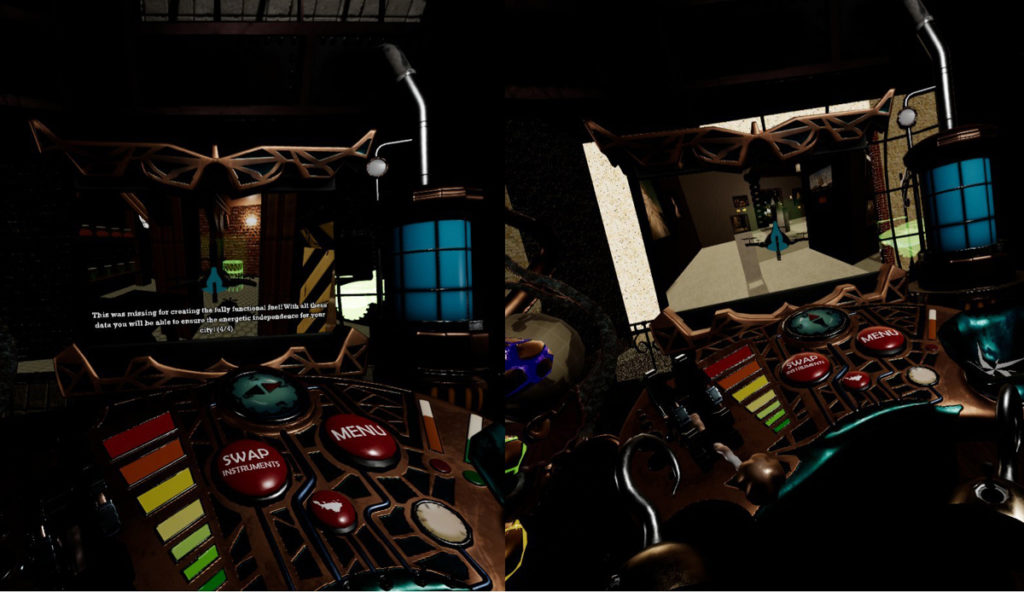 One of the bits of “story” in a mindless drone segment. The text reads, and I quote: “This was missing for creating the fully functional fuel! With all these data you will be able to ensure the energetic independence for your city!” No. Seriously. The writing is this bad.

Despite fooling around in drone sequences, getting caught in endless lag cycles, and playing every song (sometimes multiple times), I completed the game in about an hour and fifteen minutes. The “ending” of the game- if you can even call it that- was just not there?!. Not only did they omit any form of ending, but the game ends when you start a level, then…nothing. No context, no explanation, not even credits; just endlessly staring into the abyss wondering when the song will begin. It’s not until you exit, and see that every song is listed with a high score, that you realize the game is actually over. This can’t be forgiven when Seabed’s store page lauds its own storyline, despite no obvious presence of any story whatsoever within the game.

Seabed can be truly enjoyable at times, with unique musical gameplay and beautiful environments. At other times, however, it can be boring or even unplayable, suffering from performance issues and poor design choices. The asking price is worth paying someday, but for now you should avoid Seabed until its main issues are fixed.

What would I pay?  Probably five dollars, tops. If the game is ever improved to becoming playable, it would be easily worth $5-10.  Without much other enjoyable content, however, this game mechanic is the sole reason you’d have to buy this

Mythic Owl provided theVRgrid with a review copy of this game and, regardless of our review, we thank them for that!