Multiplayer exclusive VR games are a risk no matter what headset they are on.  VR is still a small market when compared to the non-VR counterparts meaning the player-base for any VR multiplayer title is automatically going to be smaller.  Because of this, it’s up developers to rise above mediocrity and put out titles that not only stand above the rest, but still include unique VR aspects that will draw us headset wearers to them.  Skyfront looks to be one of the better VR MP games out there utilizing mechanics we have seen on other VR games but refining them for more fast-paced and intense action. 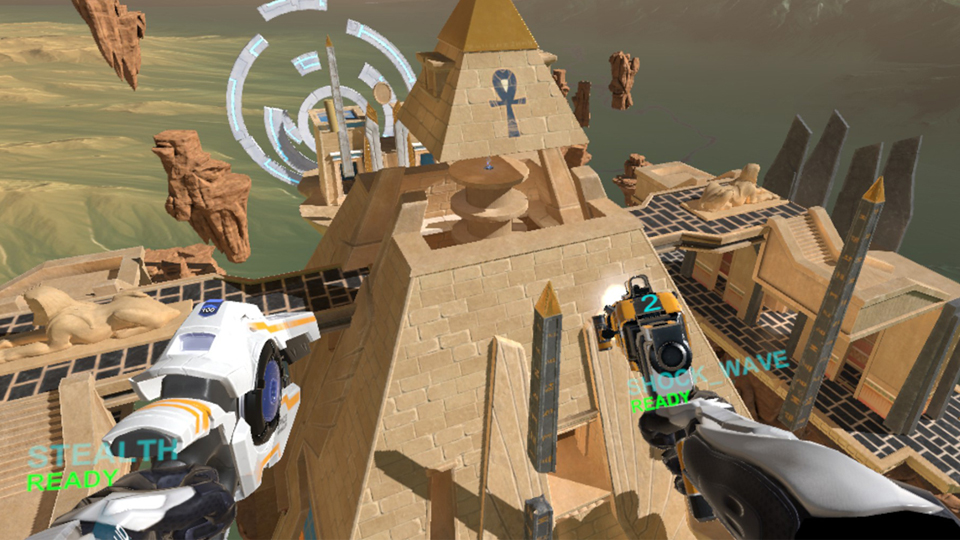 I love the level designs in here!

You need two motion controllers for this bad boy as navigation is handled by the direction you point your hands.  There are actually 2 ways to move with you using hand held rockets to maneuver around the map or a grappler which has a limited range, but if you latch on to something, it will pull you to that spot way faster then the rockets would.  As you have 2 hands, you can have 2 guns so most of the time one will be used to move around, the other will more than likely have some kind of armament, though to quickly move around the map you can equip 2 rockets for double the speed and easily swap between 2 weapons whereupon you wont be able to move, but can dish out some damage.  Special abilities with cool downs can also be chosen for temporary buffs like shields, cloaking and a few others.  It’s worth noting that the game is designed to utilize the 360 tracking available in the PC side of things, but there is an in -game turn option assigned not to the thumb sticks, but one of the face buttons on each controllers and there is no option for smooth-turning, just snap turning only.  All the weapons and buffs are available as soon as you start the game so it’s never unfair in regard to load outs though I definitely found one or 2 weapons to be more effective then others, but that could very well be based upon my play style.  You can choose Team Death Match, Free-for-all and Team Domination currently, with more modes apparently coming down the road but given just how small the player base is currently, holding off on those other modes for now allows the player base to not become to fractured. 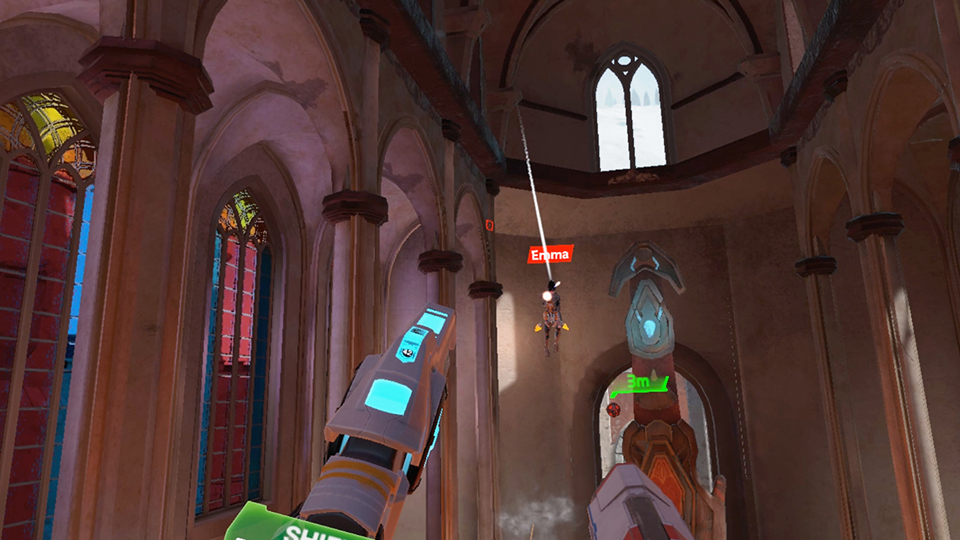 Line ’em up and take ’em down!

There are currently 4 maps available;  A castle stage with floating islands all around looks like it was ripped right from the Trickser VR title and seems to attract people to the central cathedral for some hectic gameplay.  Another has you on a space ship of sorts with debris and barriers scattered all around, emphasizing more of a cat and mouse type game style with the last 2 maps (Egyptian and Roman themed) focusing on more free form action.  Any of the maps look great and all them take place in a large sphere which acts as the walls of the level.  Each map is very large with multiple nooks and crannies to explore allowing for quick escapes or sneak attacks and each stage also offers health scattered around the map at fixed locations in case you take some damage.  The levels are static but are great fun to fly around in and the variety between them really keeps longer plays feel fresh.  The level of detail on these levels isn’t amazing but the scope and scale, along with the broken way these maps look, gives Skyfront VR a unique style.  You can customize your avatar, so each player looks relatively unique as there are plenty of suits, masks and jet stream options.

On the sound side the game is much less exceptional but by no means awful containing some high-paced music to get you in the mood and sound effects that match the action.  Each weapon carries some decent ‘oomph’ and when you kick your jets on you can hear them propel you forward as if you were holding 2 little jet-engines.  When you take damage, your character will grunt and when someone dies, they let out a final groan before re-spawning. In deathmatch all the mics are active so you chat with all your opponents which can be a little overwhelming when a bunch of people are all chatting at the same time though there is an option to mute individual players if you want. 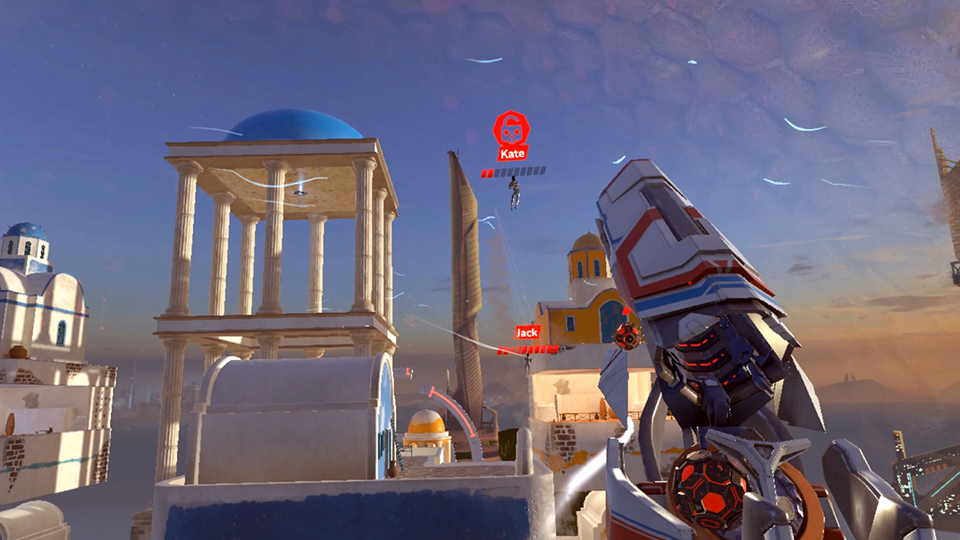 Take to the skies!

Skyfront VR has a great base for a fun VR multiplayer title.  The 4 maps are entertaining and you can vote on the next map you would wish to play on.  With weapon selection being assigned to the thumb sticks it can be a little to easy to swap weapons and I often found myself trying to bring up a gun but accidentally switching to the rockets causing a few unnecessary deaths.  It’s not game breaking and if your careful this can be avoided, but in my few hours of play I still found myself fumbling through gun selection during hectic moments.   Should you be unable to find any players the game will ask you if you would like to face bots until a human opponent shows up, which is great, but the bots are next to brainless and offer nothing more then target practice as they fly straight toward you dealing minimal damage.  An option for more aggressive and intelligent bots is needed to sustain players who may be forced to wait for more then a few minutes for a friend to join in.  Besides those issues, the actual gameplay is solid and when you get into a match with a bunch of people, it’s an absolute blast to whip around the map coming at guys from high and low while at the same time worrying about getting taken out from high and low essentially never letting you relax, which is great! 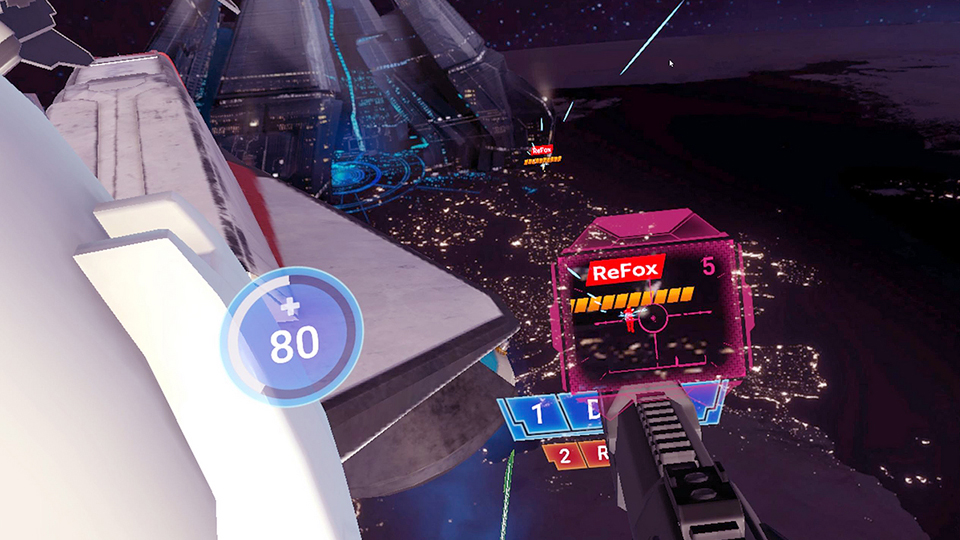 In space, you can still hear people scream.

Skyfront VR offers up a solid, if not simple, multiplayer experience, assuming you can find a few people to play with.  If you are wanting to play you may need to hang around on your own for a bit to attract players to your lobby but every time I hung around and just waited, people did show up and soon enough I was in full-blown combat.  Other then the movement mechanics which do take some getting used too, the game plays like a well-polished shooter in zero gravity as is a ton of fun to play.  I had a lot more fun with this then I thought I would and I’m looking forward to diving back in to take out the competition.

What would I pay? The $10 price this is a steal.  It’s not the most robust multiplayer experience out there but considering that price I am more then happy with the content and gameplay and while the steam page suggests more content is coming down the road, as it stands now, Sky front VR is a must buy for those looking for some online action…I mean, it’s only $10!

Levity Play provided The VR Grid with a press code for this title and, regardless of this review, we thank them for that!