I’m not sure what I expected from RUINSMAGUS, but after the 1st trailer dropped late in 2021, my hopes were high that it would deliver an engaging and fleshed out JRPG, a genre that has been largely ignored in Virtual Reality.  With its release, you are placed in the role of an apprentice mage who must learn new magics and abilities while exploring dangerous, monster filled ruins beneath the town of Grand Amnis…so far, so good…right? 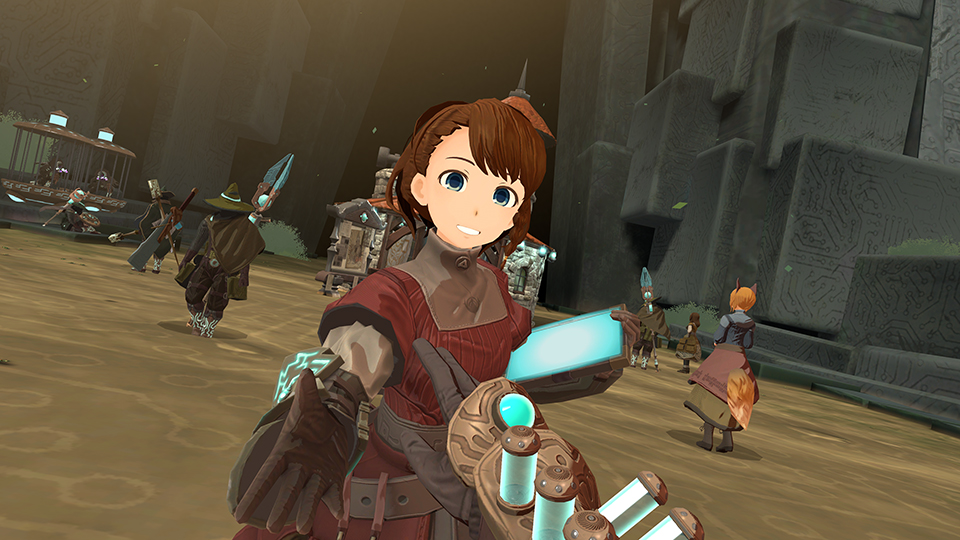 Meet Iris, she’ll be hanging out with you quite a bit.

An opening tutorial takes you through the game’s basics, which are fairly in-depth requiring you to utilize all the buttons on each controller to perform a variety of actions.  Casting spells is handled by your right-hand triggers while face and thumbsticks are used to cycle through the various magics and items found on your journey.  There are comfort options in place that allow for teleportation, blinders & click-turning but for my play, I turned everything to full locomotion and for you lefties out there, there isn’t an option to switch hands.  On your left arm is a shield which can not only protect you from incoming attacks but can also deflect shots back at your foes IF you can get your timing down as projectiles fly towards you.  On that shield is a little tablet which displays health, armor, equipped spells as well as the items you have (potions, buffs & grenades), the latter of which can be grabbed off your chest to be used.  Magical attacks range from simple fireballs to more complicated ones like spread burst and others while supplementary attacks like turrets and mines can be used as alternate strikes, all of which are attached to specific elements like ice, lightning with each causing damage depending upon the foe you face as well as the strength of your upgrades.  Many of your abilities are unavailable at the stories’ onset but as you complete missions, options for shops and upgrades reveal themselves and are pivotal for your survival as you enter the ruins.  This is not an open world RPG with each mission being broken up by some simple storied narration that carries you through the campaign.  When your next mission is ready, you simply visit the job board and select that next job and you are good to go.  You may be tasked with just exploring or finding an item or person or whatever though no matter what the mission is, they always devolve into navigating a fairly linear tomb, battling monsters that appear before you and proceeding to the end with the occasional boss battle thrown in to spice things up. 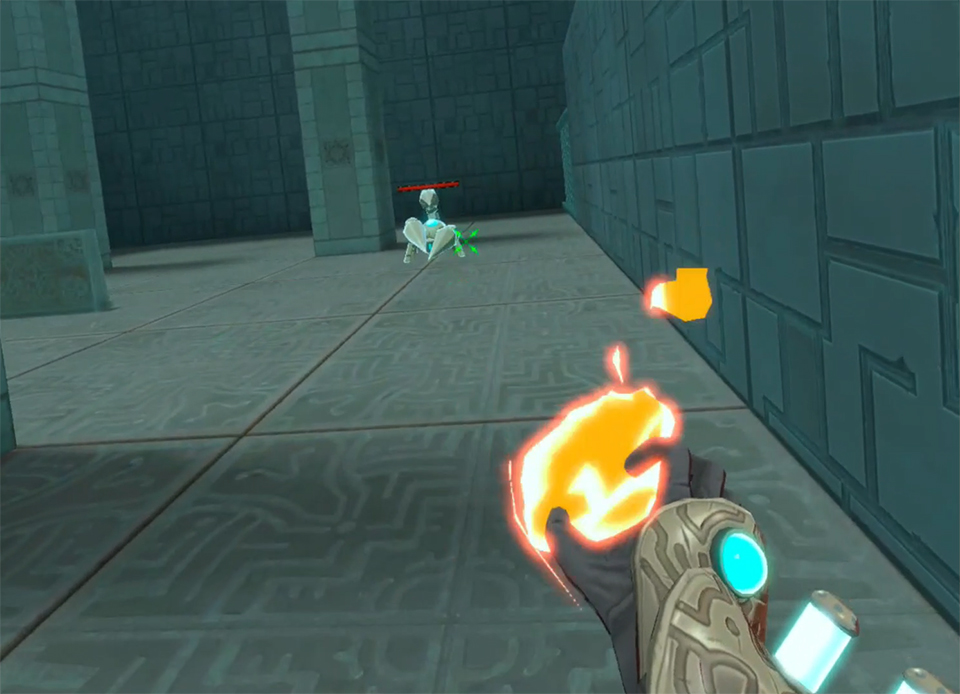 As has now become the staple for many Quest titles, the visuals here are very cartoonish though in this case, that fits much more in line with the genre as this is a light JRPG with some decently detailed characters and monsters.  As I said, the playable world is very small with your hub area being broken up into different sections that are all separated by quick, black loading screens.  Even cut scenes are broken up by these brief black pauses which annoyed me a little as, during the breaks between missions, I was treated to many cut scenes that faded to black every few seconds while characters joined or left the conversation, or the setting changed.  Not the end of the world but it’s one of those things where once I noticed it, I couldn’t unsee it and it became a little annoying.  As far as the ruins you visit, they look good, albeit very stark with massive walls, floors, pillars & stairs making up a bulk of the architecture with some color palette changes happening to help disguise just how repetitive these ruins are.  These areas have runes and symbols carved upon them, but they are just repeating patterns that make many of the voyages into the ruins feel very samey.  This goes for the enemies as well, which do change up the further you get, but still make many encounters feel identical to the last as you will fight the same monsters in the later stages as the first one.  What’s here actually looks really good at times with some of the levels and hub areas being either massive in scale or littered with a fair bit of items, but if it’s not either of those 2 things, then it looks exactly like every other room, making the dungeons feel and look very repetitious.  The boss battles are a highlight as many utilize that larger scale forcing you to square off and avoid massive stone golems or flying dragons (and regular sized foes too) and when the game looks good, it looks really good, but outside of those specific moments is a game trying to hide just how small it actually is. 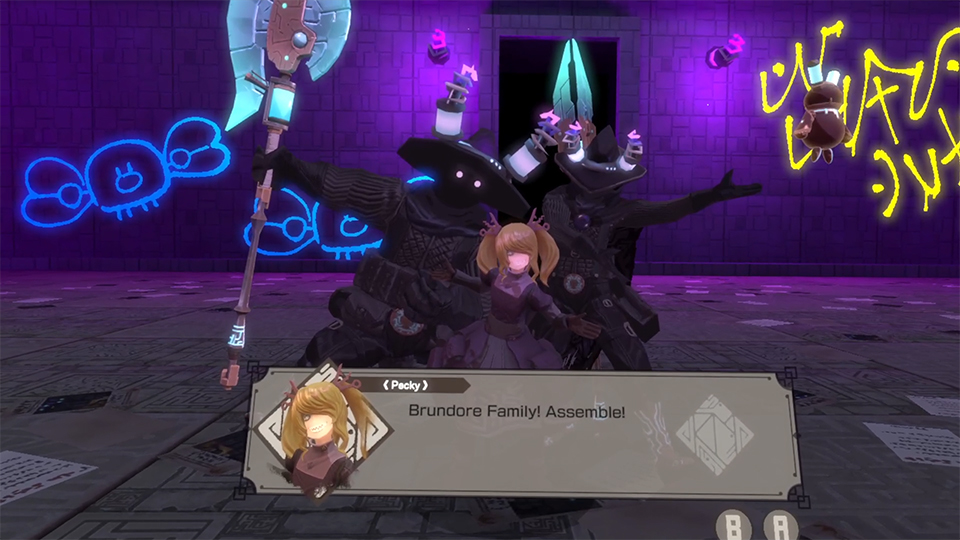 You’ll meet a variety of cooky folks on your various quests.

Everyone is fully voiced, which is awesome, though unfortunately English localization is only for the subtitles so us anglophones will have to do a fair bit of reading as the various characters you meet throughout the 8-hour campaign chat it up.  Some characters can be a tad annoying with your main ally Iris, being particularly irksome in ‘Navi-like’ fashion as she exclaims at every one of your victories.  She and the other NPC aren’t without their own charm thanks to the solid facial animations that accompany the dialogue, but when they do annoy, there is very little to do about that except to lower the volume.  The soundtrack consists of a variety of musical scores that accompany each area or encounter and sound top quality be it orchestral, swelling numbers or more subdued tones depending on the situation with some decent 3D audio standing out during some of the live cut-scenes. 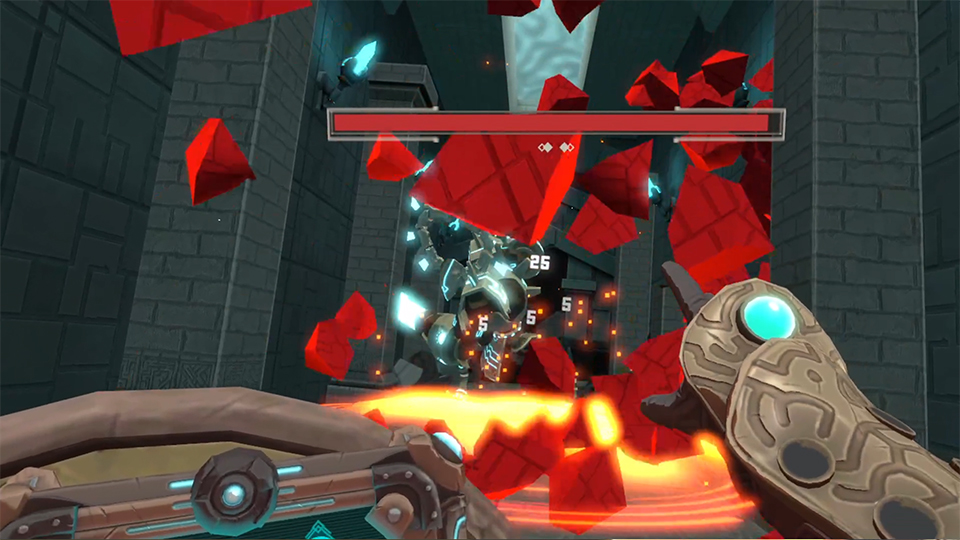 It’s best to block incoming attacks with your shield.

RUINSMAGUS is not a bad game by any stretch and honestly reminded me of classic RPG’s like Link to the Past or even Secret of Mana in regard to the core gameplay and light-hearted comedy and while I love both those games immensely, that same formula simplified and modified for VR has me a little let down by what’s here.  Combat devolves into firing magic, reloading that magic when you are low by grabbing at your hip, and strafing or dashing from side to side.  The variety of the spells is commendable but it’s all too easy to stick with the few spells that seem to be the most generally effective against most foes.  You can only change up weapons and inventory in the hub or at specific sections within the ruins which I thought was an odd choice.  Upgrading is based more around story progression then loot or experience so when upgrades became available, I always had more than enough currency to nab them up right away.  Speaking of loot, there isn’t any…not really as you are only rewarded with money after you have completed a mission with enemies never dropping anything.  Nearly every mission can be beaten quite quickly with most taking no more than 10 to 15 minutes making the 25+ stages in here go by quite fast. Each mission is timed so how fast you beat the stage, how many enemies you defeat & how many times you die all affect that stages rating and score which…I think affects the loot I received?  It’s not totally clear, but I assume that’s the case and if I died during a mission, I had 3 lives to try again before the game kicked me back to the entrance which is fine as each death did not replenish items so if I used up a bulk of my potions on a boss I couldn’t quite beat, I was basically screwed on that last life anyways and needed to head back to the shop regardless. Only a few boss battles held me up as they can be quite challenging thanks to just how much damage they can do and how widespread their attacks can be, though outside of those encounters and as long as I paid attention to my health, every mission was fairly easy.  There are some fun additions like a camera you get early on that lets you take pictures anytime you want as well as some comedic encounters with allies & enemies but those moments of true fun are few and far between, leaving me wanting for more when it comes to many aspects of the game. 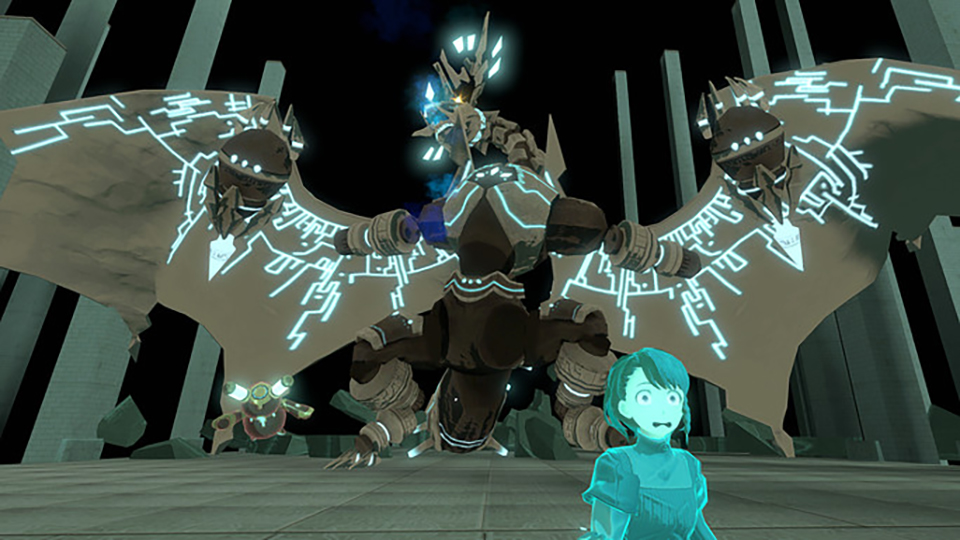 Some of the bosses are very, very large!

I wanted to like this, I really did and while I don’t hate it, I had a really hard time getting through it as I found it to be rather monotonous.  I played on medium and of all the issues I had with this, the difficulty was the least of them with the overall gameplay loop just landing flat for me.  The scale of this world is just too constrained, making it feel like a smaller area of a much larger RPG.  There are plenty of mechanics to master and I bet some people will appreciate just what the devs were going for and it is a quality looking, somewhat lengthy VR title, just one that’s not quite as deep as it initially appears.

What would I pay? This is $35 and that’s a bit steep for what’s here.  While the story is humorous and game has some legs, I just found myself bored with venturing back into the ruins again & again to fight the same foes over & over.  If you are curious, wait for this to be at least $10 cheaper

It’s has charm & polish but for myself, relies to heavily on repetition.

Mastiff Games provided The VR Grid with a press code for this title and, regardless of this review, we thank them for that!