Mare is a game all about minimalism.   Very little backstory is revealed and the reasons why you are doing the things you do isn’t really clear at the games onset.  What exactly do you do in Mare?  Well, the premise is that you wake up, only to find yourself embodying a mechanical bird flying through a very strange land.  Soon enough you’ll find a young human companion and thus begins your symbiotic journey as you help each other travel through the ruins of this world. 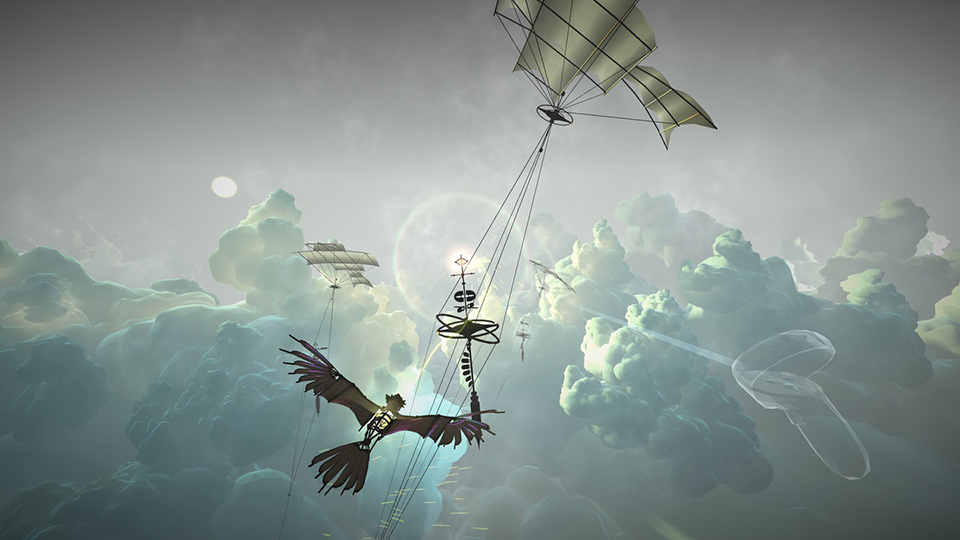 You don’t control the bird’s flight, but select nav points to fly too.

As the bird, you navigate by waypoint as small perches pop up and are placed around the map allowing you to travel forwards and backwards as the stages permit.  Once you find a young girl, you must also help guide her through the stages as she’ll need to open doors and trigger switches that will reveal your next path.  Only a single controller is needed to play Mare and as you navigate the 8-stage campaign, you’ll encounter some strange foes as well.   You have a few powers and abilities to aid in your efforts, the foremost being an electrical shock that you can use to defend the girl from assailants as well as activate triggers and machines found throughout the story.  Puzzles are the name of the game and you’ll have to assist the girl in choosing the right path to move forward.  She is incredibly good at navigating the environment, but at key points you’ll have to help guide her by triggering items in the environment at the right time to signal where you would like her to go like ringing bells or shaking trees to get her attention.  She will almost always try and get as close to you as she can so with that in mind it’s easy to predict and guide her though the story.  Where things get tricky are the puzzles that require you to choose from multiple paths to find your way out of maze though none of these are every really too challenging, at least for those who a veteran puzzle solvers.  The real challenge in here lies in finding the hidden animal ornaments scattered throughout each stage.  Collecting these can be extremely tough and time consuming but doing so rewards you with the “true” ending to the game, and I think are worth picking up so pay attention on your first go as trying to find them once you have beaten the game will involve replaying the stages over again, though you can choose from the various checkpoints in each stage and once found, you can quit that stage and continue your search elsewhere. 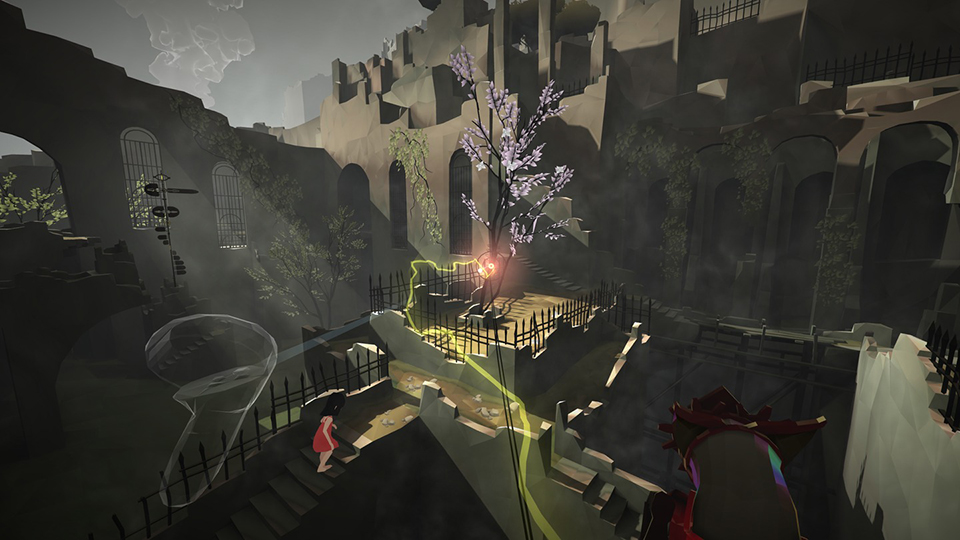 You can’t help but care for the little girl.

Where Mare shines is its presentation with some very striking visuals that highlight the strengths of less powerful headsets like the Quest.  The art style chosen in minimalist and stark with much of the environment and objects you find being comprised of simple geometric shapes, stitched together to make something that is very impressive.  We’ve seen this art style before in games like Land’s End or Paper Beast though unlike those titles, this just seems more grand…and more subdued.  The stages are massive, and the draw distance may as well be endless, showcasing the barren landscapes you find yourself flying through.  Impressive shadow and lighting effects add to overall ambience as does the girl and the beings you encounter who all just look great.  The girl lacks much detail beyond the most basic of facial features, but her movements are so realistic, I quickly came to care for her well being as she embodies the innocence of a young child quite accurately.  She moves quite naturally, hops down smaller jumps, puts her arms out wide when she needs to balance and waves at you when she wants to let you know where she is.  Watching this pair navigate though the world is an absolute treat and as you head closer and closer toward the heart of the desolate city, the overall sense of the foreboding unknown is ever present and a constant reminder that the world you are in is familiar but mysterious.

Sound design is also top quality with an excellent, ambient fantasy sci-fi soundtrack that perfectly matches the gameplay, especially at pivotal moments when the drama ramps up.  The creaking sound of the bird’s perches as you land on them and the grinding metal of old technology, when combined with the soundtrack and environmental effects, further hammers home that isolationist feel.  In fact, my own real complaint with the presentation is just how few sound bytes the girl has.  She speaks no English and will exclaim when she’s trying to get your attention or if she’s in duress, but as she is a companion of yours for most of the game, hearing the same 5 sounds out of her mouth did get a little old. 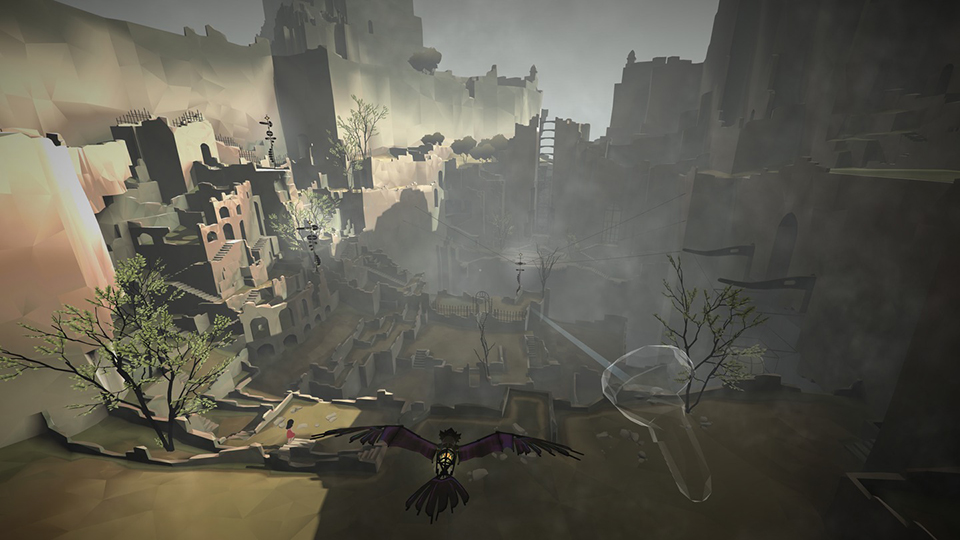 The scale of the stages is massive!

Fans of games like ICO or Paper Beast will immediately find similarities in Mare and I mean that as a compliment.  The game is definitely slower paced with many moments in here having you waiting for the girl to catch up to you, the bird.  There is little story, and even if you get the ‘real’ ending, much is left unexplained which works to games benefit as enough is hinted at to fill in those larger gaps.  It’s not about the destination, but the journey as they say, and Mare is one helluva journey.  From the opening moments of the game, all the way to it’s conclusion, I was enamoured by the presentation and the story.  It is confusing and intriguing but when I finished the game, I was also pleasantly satisfied.  Finding all the collectibles was a challenge of patience as the system in place to tell you which stage they are in is hard to decipher with icons floating near stage markers that don’t quite line up.  Even choosing specific checkpoints in a stage after you have beaten it is confusing as they are just circles on a hand drawn map of the level in question.  Still, I did manage to find them all though I will reiterate again, it’s in your best interest to try and find them all on your first attempt through the campaign.  One other issue of note would be that the game is click-turn only and even though that’s just for the camera view, it’s annoying and on a few occasions, I did lose my bearings and headed in the wrong direction.   Beside those minor inconveniences though is a game that never wears out its welcome and impresses from beginning to end and it’s really hard to ask for much more than that. 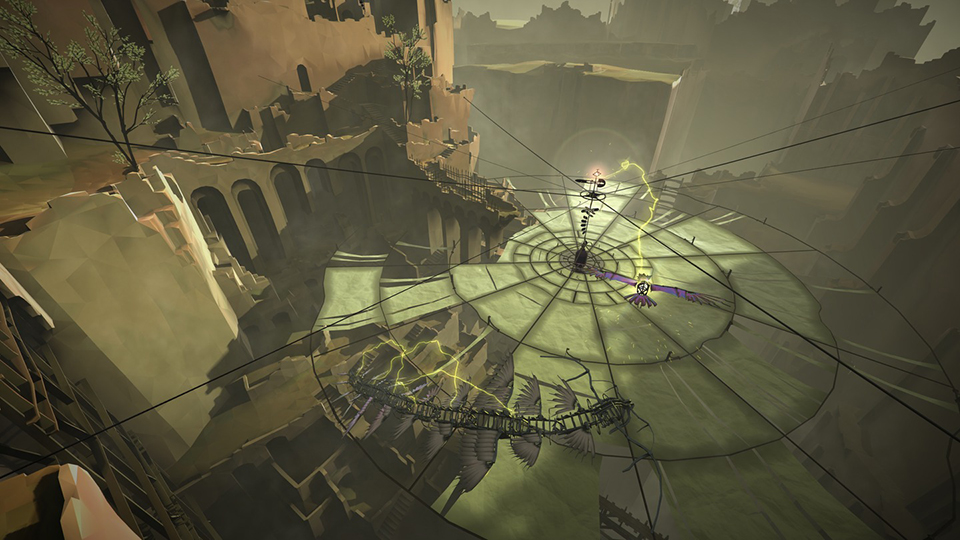 Some of the set pieces are just amazing!

Mare is nothing short of breathtaking and a welcome change of pace to the to action-packed, fast-paced titles I have been playing of late.  Its a strikingly beautiful yet solemn adventure that pushes you ever forward toward the unknown.  The pace of the game may turn some off as it can be a little slow at times but stick too it and you get to experience one of the more satisfying puzzlers I have played in recent memory.

What would I pay?  This is $20US and worth every penny.  The campaign will take somewhere in the 3 hour mark to go through for most of us I think, with the overall polish, striking visuals and haunting story all coming together for one great little package!

Visiontrick Media provided The VR Grid with a press code for this title and regardless of this review, we thank them for that!