This is not the racing game you are looking for and if the ‘Infinity’ in the title didn’t clue you in this not a racer at all…well not really, but rather an endless runner (of sorts) where you steer you ship while avoiding all manner of futuristic obstacles in a quest to get the highest score you can. 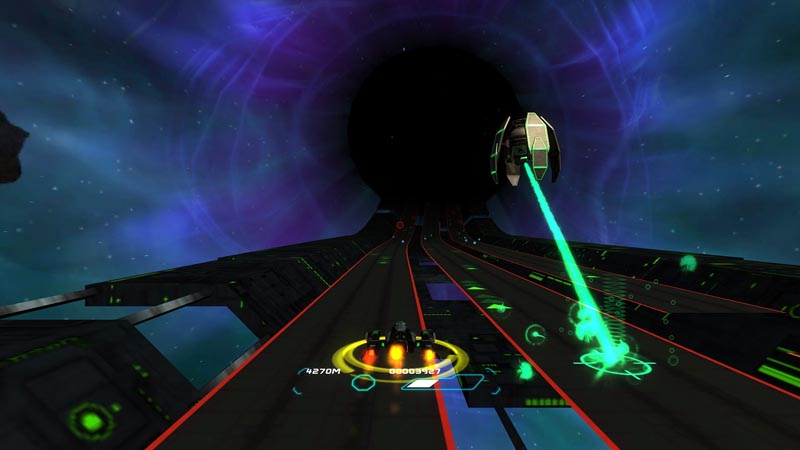 Watch out for that beam!

Instead of swiping left or right like many runners, Radial G only requires a simple tap on the touch pad to move left or right.  The key is to be looking to the left or right of your ship when you tap to move in that direction. Traditionally, this game type usually has 3 lanes to choose from and so does this, except each lane is broken up into 3 smaller lanes giving you 9 options to avoid obstacles while collecting points and power ups.  It takes some getting used to make sure you are looking where you want to go, which sounds dumb, but it does take practice to feel natural.

The game looks alright…nothing crazy, but it looks clean enough.  I found the game to be a tad drab with heavy use of greys, browns and yellows, but its not the worst thing to see.  What I did like was that the course ahead of you spawns from a black hole. It’s a smart way to minimize processing power for maximum performance and reminded me of games like Thumper(Awesome!) or Space Ribbon(Terrible!) and it just looks cool.  What’s motivating you into going forward? The alien consuming the track behind you!  The tracks are littered with gems/points and power ups like shields and magnets.   The further you get the more stuff you’ll see and the variety of objects that come at you keeps you on your toes. 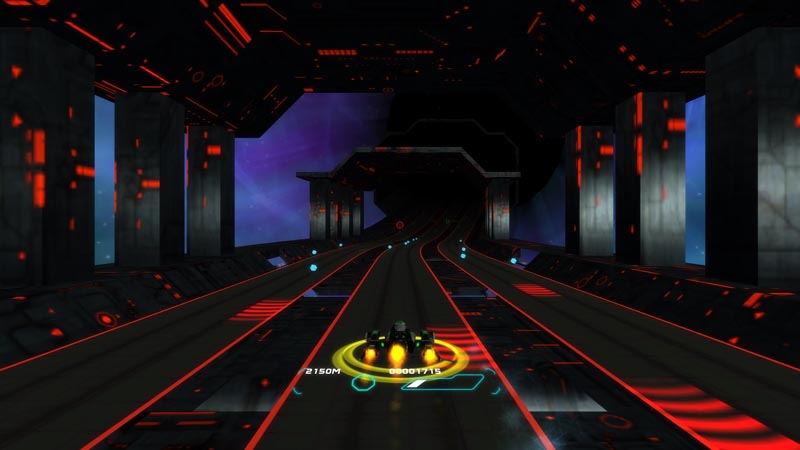 The 1 level changes things up a bit, but it all kind of looks the same.

As it’s one on-going stage, the visuals lose their lustre fairly quickly, but you’ll be focused so much on what’s coming up next that you really won’t have time take in the surroundings.  While the pace isn’t frenetic, that doesn’t mean it’s an easy ride.  Each of the main 3 tracks I broken up by gaps, where you have to be on the right sub-track (with the jump) to clear it, throw in enemies that target you or the course ahead of you, and objects taking up any size of lane, forcing jumps to the adjacent tracks.  There is a lot to pay attention to and that really is the core of the game and what kept me coming back for more.

Reaching certain score goals unlocks a few other ships and the longer you play, the more “enemy types” are introduced and change up the way you play until you reach the “Final Boss”.  Besides my issue with the controls, my only other one is that, though it bears the Radial-G title, it doesn’t feel like a Radial-G game.  I never felt like I was going really fast (check out the Radial-G trailer for some insanity) and while that more of an issue with my predisposed thoughts on how the game should be, it still felt a little slow. 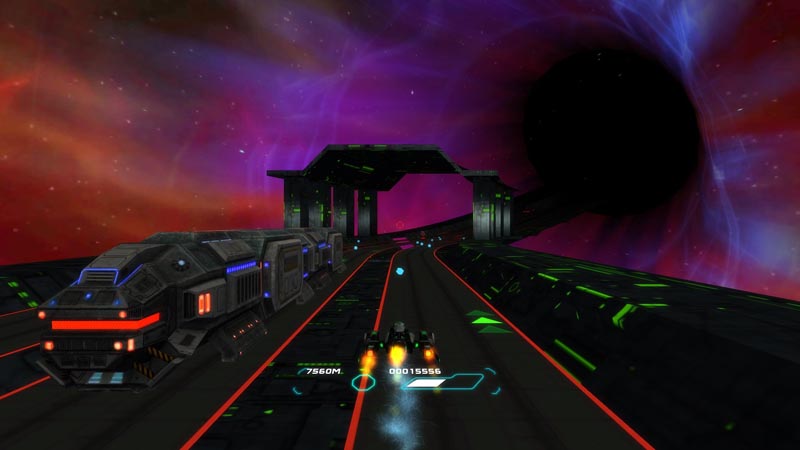 Trains can be easy enough to see coming, but when combined with everything else around you are an obstacle to take seriously.

This is an interesting endless runner-type game with some unique gameplay elements that make it stand out against the plethora of runners already available.  It’s easy to pick up and play but the further you get the more challenging it becomes with the game having that ‘just one more time’ element that plagues so many addicting games (in a good way).

What would I pay? $2 is an absolutely perfect price.  While it stands above many in the genre, it’s a very crowded genre and the low asking price feels like a deal for the addicting gameplay presented.