Race the Sun, described as a third person endless runner, was made available for the PS3, PS4 and the PS Vita and several years ago in 2013, evolving since that time. Its’ abstract art design, fast action, simple premise and highly addictive nature made it a success on the various platforms. The developers have released an updated version of their game bringing together more features and most importantly, a VR patch.  This review will feature how the original game plays and how it translates to the headset. 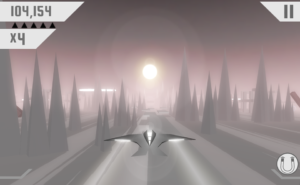 Keep out of the shade unless you want to crash

You control a sleek spaceship powered by solar energy, navigating the flat landscape while avoiding structures and moving objects formed by polygons, which come hurtling towards you. Starting at region 1, your aim is to progress through the regions, accumulating high scores, which get posted to the leaderboards. Your spaceship steers to the left and right utilizing the dual shock controller. It’s easy to play, but the hazards in your play area are numerous and require a good level of skill to maneuver your ship between them and avoid crashing. Doing so results in you being sent straight back to region 1 to start over.

Your other incentive to staying in one piece is to continuously fly in the light of the sun to maintain your power and speed. Fly in the shade and your speed drops, resulting in a crash if sunlight is not found quick enough. Dotted throughout the regions are Tri’s. These are triangular blue beams of light which add to your score and offer multipliers with each successful pick up. To help you along the way are power ups which you need to fly over to collect, giving you anything from a brief burst of speed to a singular jump. Your spaceship flies at a constant low altitude but activating a jump sends you soaring through the air bypassing obstacles for a few precious seconds. As you progress through the regions, you will get the opportunity to enhance your spaceship by customizing it to suit your play style. These add-ons range from magnets to shields and become a permanent addition to your craft. This is a nice addition to add that little bit of depth.

Each restart come with a set of challenges for that play, such as collecting a set amount of tri’s, flying a certain distance or obtaining a particular score. Successfully complete these on your run and these awards are added to your score and towards your ship’s upgrades. The terrain is made up from a variety of geometric shapes and sizes to negotiate, from huge cylindrical columns to square blocks and from ramps to mazes. Each region has easier and more difficult routes and once you master which way to steer and what to avoid then completing each gets a little easier. That is until the landscape totally changes the next time you happen to play as the developers have ensured that after every 24 hours the regions play areas change in pattern and layout, meaning although it is a straight forward game, repetition is minimized for ultimate challenge.

Included with the new update are more relaxed and less hectic ambient levels and the option of switching to VR mode. In this mode, you have the added first person perspective, but don’t expect the landscape to stretch behind you or to the sides, all the viewpoint consisted of was what was immediately in front of me. Looking to the sides and behind just results in the terrain disappearing and greying out. There is no 360-degree playfield offered here,  and though this does not affect gameplay, it does take away some immersion. It would have been cool, after narrowly avoided a large column, to glance behind you and seeing it vanish in the distance. Also in this first-person mode, it’s very hard to judge where in relation you are to nearby objects as there are no visual indicators to help you, making play more difficult. 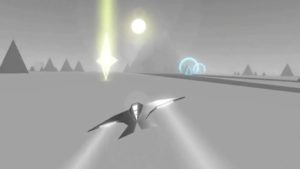 Collect the yellow power up for speed boosts

Having said that, Race the Sun’s sense of speed is impressive.   The ground and objects rush by at a fair speed and finding the luxury of glancing around to admire the landscape is detrimental if you want your spaceship to remain intact. I also found it to be a lackluster port to VR and though you can fly using the Dual Shock controller, there is no head tracking implementation to steer the ship (as in Eagle Flight). As an added option, this would have been great.

In summary, this is an enjoyable, fun game and has that important ‘just one more go’ factor.  The controls and speed are spot on, and the environments, particularly the later ones are varied and interesting. The VR mode offers no real addition over the main game and will probably hinder your efforts when compared to playing in Third-person. Purchasing this game solely for playing in VR will probably disappoint you. It looks and plays much better in regular mode and the endless runner contained in the Herocade compilation is perhaps a better VR alternative.

What would I pay? £7.39 is a good price point as you receive both the regular mode and VR mode, and although both possess high addiction and fun levels, the non-VR mode is the superior way to play.

Flippfly provided theVRgrid with a review copy of this game and, regardless of our score, we thank them for that!