Flying in VR is awesome!  In almost every VR experience I have played where flight was a component in one way or another, I can’t help but marvel at just how cool it is to be soaring above cities, cruising through tunnels or even through stories in a book.  That sense of freedom makes genre’s utilizing flight a little near and dear to my heart as that has been one of dreams since I was a child.  Pirate Flight hopes to bring a more casual flying experience to fans by simplifying not just controls, but visuals as well for an game that can be played by those with even the most sensitive of constitutions. 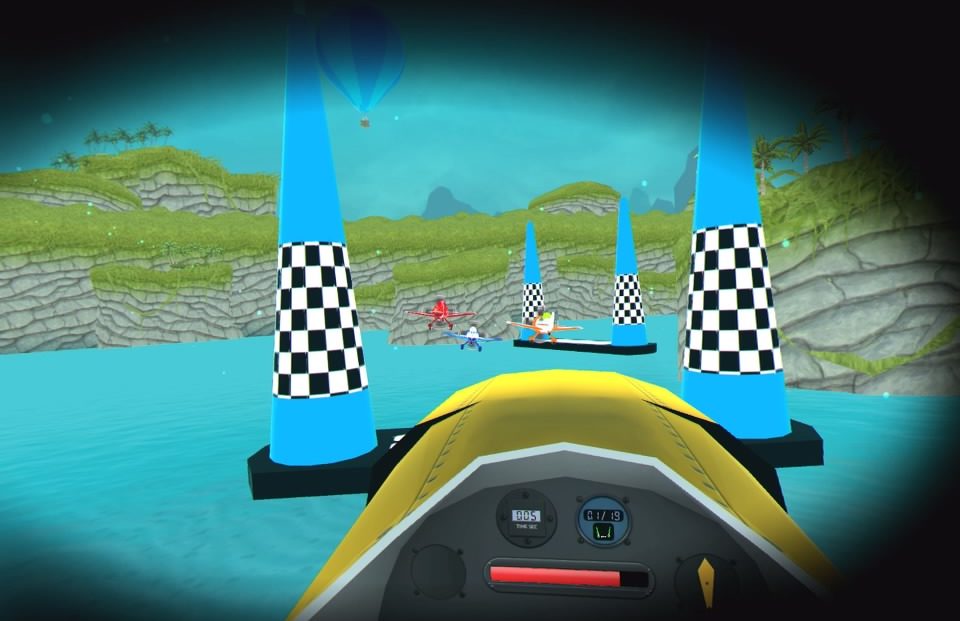 Hit the throttle and crush these fools

The controls here are very basic.  Throttle is handled by the game, though you can use a boost button if you would like to go a little faster.  Steering is handled by the left thumbstick and during the balloon shooting missions, you can press ‘square’ to shoot some giant balls. There are 3 different game modes; Rings, Race & Balloon with each offering slight variations on the games core mechanics.  These modes are broken up into 10 levels per stage over 3 stages, for a total of 90 different levels.  The initial stages are very easy, and my hand almost never left the boost button unless I needed to make a slightly sharper turn.  The later stages get slightly more difficult, but I found this to be more of an issue of memorization then in-game skill and besides the balloon maps, most of the ring and race stage were a breeze and I beat almost every stage on the 1st try.

The largest factor holding Pirate Flight back is the visuals.  I thought for sure this was a port from a mobile title and was a little surprised that this is a PSVR exclusive.  Everything has a very cartoonish esthetic and lacks a lot of details.  Character models look like original Mii characters from Nintendo’s games and the poly count is just really low.  However, because of those simplistic visuals, the frame rate is solid and runs flawlessly at 90 FPS on either model of PlayStation and while I was definitely unimpressed by the look of the game, it didn’t take me too long to look past the visuals and enjoy the gameplay.  The 3 stages each have their own look (Island, Jungle and Ice) so just when I got sick of looking at one background, I unlocked the next. 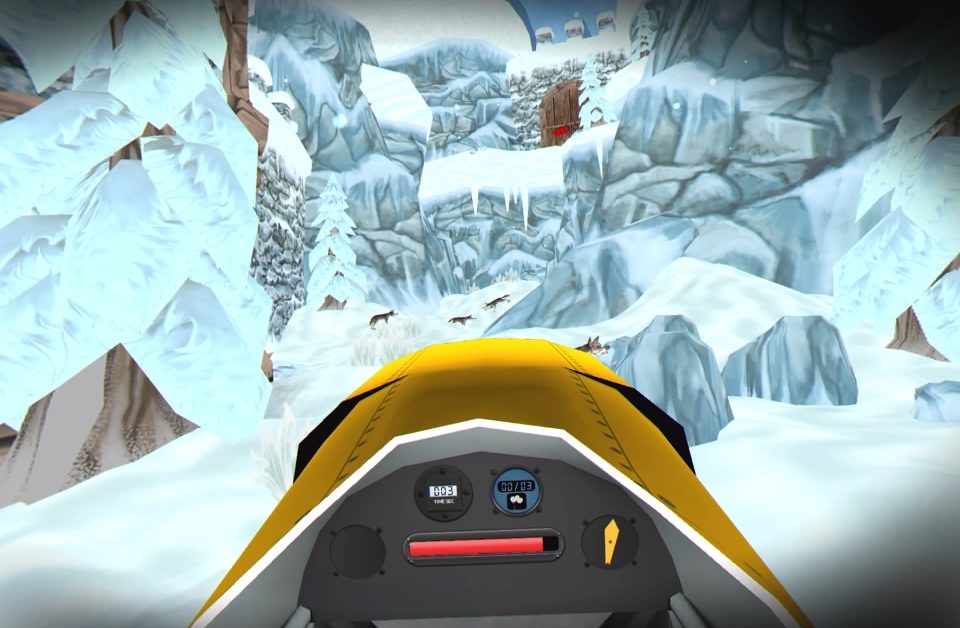 Each of the 3 worlds offers a dramatically different look

Like the visuals, the audio is simple.  Your plane has a quiet hum and there is 1 catchy beat that plays through the entirety of the game and after the 1st level, I was more then burnt out on it.  It’s completely serviceable, but if you plan on playing for an extended time, your best bet is to throw on your Spotify playlist.

Like so many other games, a 3-star system is in place to help test those skills.  1 star unlocks the next level while any more are just for bragging rights and trophies.  As long as you almost never let off the throttle in the race or ring mode, the 3 stars are easily attainable.  In balloon mode however, sometimes the balloons are strapped to planes or dragons and fly around the map and while there is a arrow on your planes dash to point you in the right direction, those moving targets can be tough to track down in a timely fashion.  There are also 10 pilot models to unlock which doesn’t change up the game in any way, but when you finish a mission, you get to look at your new self.

As of right now, blinders are on with no option to remove them, though the dev has stated that the fix for that will be coming for shortly in a patch.  I ran into a respawn issue where my plane was just to to close to island forcing an almost instant crash and an unfortunate level restart to bypass that, though it only happened to me twice in my play.  The plane does require fuel, which floats in the air as some coins with a heart logo on them but I almost never needed to worry about my fuels as the coins are scattered everywhere or just pop up along the same path that you are racing on. 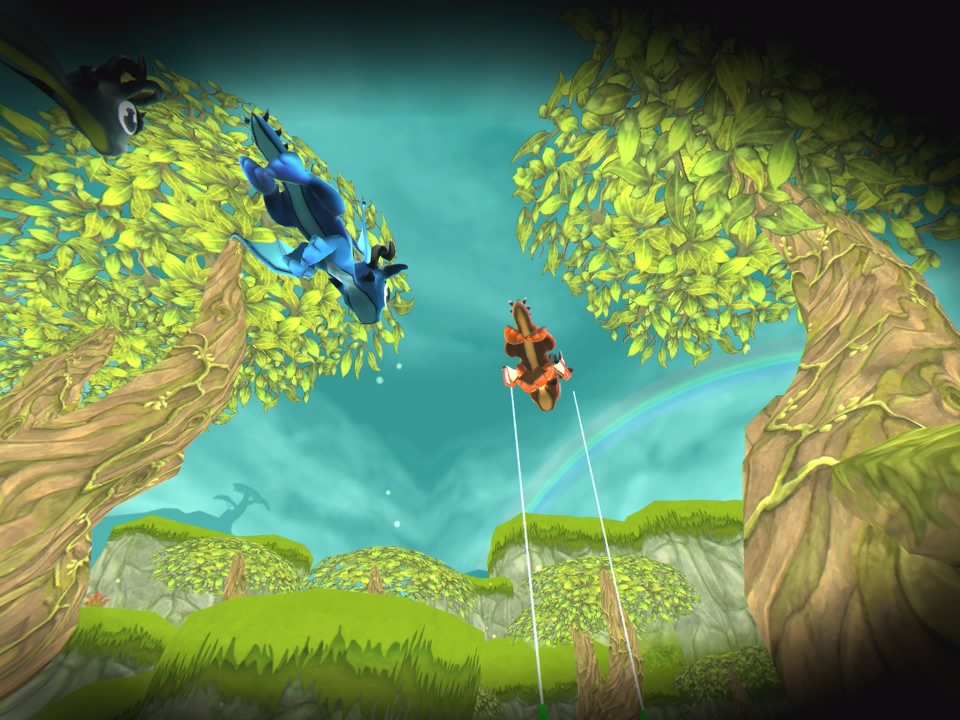 These dragons don’t offer much in the way of competition

Pirate Flight succeeds at what it sets out to do, but what that is really isn’t that amazing.  The easy difficulty will turn off those looking for a challenge and simplistic visuals will more then likely do the same, especially for those who have played more graphically impressive games like Eagle Flight or Ultrawings.  With that said, the simplistic nature of the game lends itself well to those who experience sim sickness and are just looking for a casual, worry free flight in VR.  With roughly 2-hours of content there is a fair bit to get through and it is a solid introduction to Flight in VR with minimum comfort issues.  If your looking to show this off to grandma or maybe show something to a child in VR, this is probably where Pirate Flight shines the most

What would I pay? The $15 price tag still seems a tad high to me.  The content is there, but the presentation and simplistic gameplay put this more in the $10 range for me, but if you’ve headed my words an are still interested, the full price isn’t insane.

Andreas Von Lepel provided The VR Grid with a review code for this game and, regardless of this review, we thank them for that!