I love Nintendo style racing games. Diddy-kong racing and Mario Kart are all time favourites for me in this genre. I think I spent more time in high school playing Double Dash instead of actually learning about learning stuffs. Here’s a game that attempts to reignite my passion for racing games, but this time in Virtual Reality!

In the far reaches of the galaxy, gigantic space creatures have been discovered.

Creatures that vomit solid matter out of their mouths. Solid matter that is the perfect substance to drive beat up cars in a race to enter the creature’s mouth.

We call it the Space Ribbon. 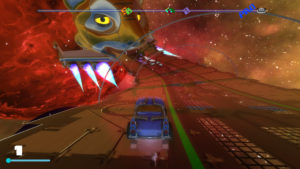 The concept is cool…the game is not

Wrong. This game is terrible, poorly designed garbage. I can appreciate that a talented group of people worked hard to create this, and that this is their baby.  But this baby is really ugly. The music is uninspired. The graphics are mediocre, at best, and the worst part is the feel of the driving. There is no feel, it’s just a slapped together idea of a game. This is why racing games are so hard to make, it takes more time getting the feel of the racing down and less time making everything else work. The developers did not spend enough time creating a good feel racing game.

They also have built in multiplayer so you can play split screen, I did not try this, however I would not subject anyone I know to play this game, even for one race.

Why is this even a Virtual Reality game? There’s no reason this has to be a VR game at all. It’s just a racing game where you look forward, they even have a button so you can quickly look behind you. Again, what’s the point? If I’m racing, I’m not going to take the time to look around.

That brings me to my next point. This game will probably give you motion sickness. If you don’t like to feel that way, then do not play this, ever. I forced myself to get through it, and then realized it was not worth it after I felt terrible afterwards. I’m sure this game is not designed for being played exclusively in VR, but at VRGrid we’re here to review games in VR. 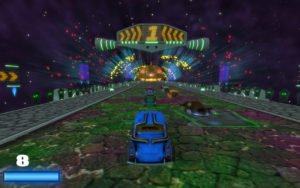 On your marks….get set…go play something else!

These guys are clearly experienced developers, who have been working on apps since 2001. I do not discredit their ability to create something unique and well put together. I do think that this was just a casual game made for a genre that isn’t typically casual. Judging from their previous works, I can tell that they have a lot of experience creating iOS apps for a casual audience. This probably explains the overly sensitive controls and uninspired art and gameplay. I applaud their achievements they’ve had in the past, but this game is nothing to cheer about.

What would I pay? $0.  In it’s current state it’s not worth money. For $10.99 this is a total rip off.  Until the developer addresses core issues, don’t spend money on this.

***Note this review is for the Early Access version of the game, upon it’s full release we will revisit this title and re-review it.  That said, this costs money in it’s current form and that meets our review criteria.***