One of the best things about VR games is when you get to fly in them.  Whether it’s cruising in a plane over the Islands in Ultrawings, fighting off robots in Iron Man VR or just soaring through the remains of France in Eagle Flight, VR’s ability to put you in the game makes flying in them typically awesome.  NeonHAT is something we haven’t quite seen before on the PSVR headsets as you must race against drones, fight them and compete in some epic boss battles, all in in effort to stop some baddies from I guess taking over stuff…it’s not really clear, nor does it really matter. 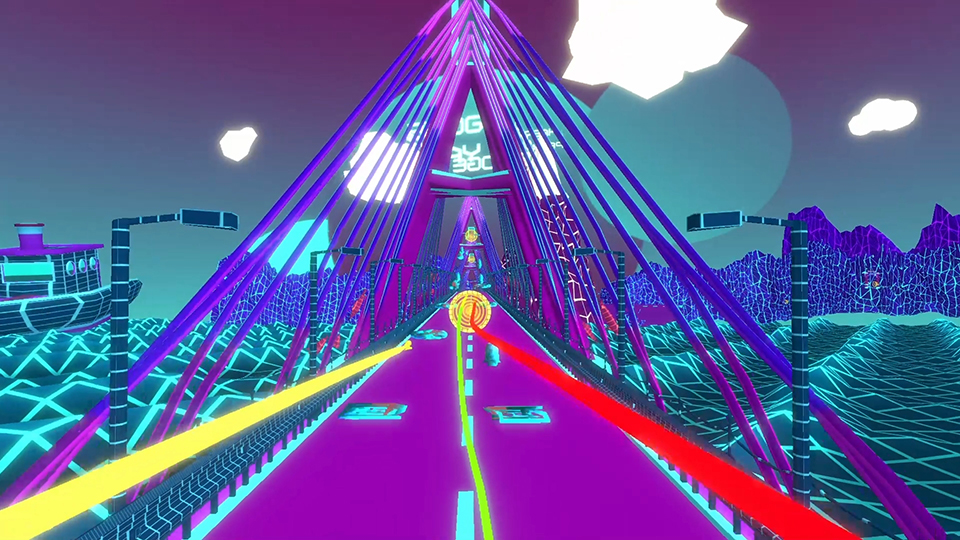 You can play using 2 Moves or a Ds4 and while the core controls are the same, playing with the Moves is substantially more fun and easier thanks to having 2 separate jets instead of having them locked together.  Using the Triggers allows you to accelerate and brake and pointing your jets will steer you in that direction with turning assigned to pressing ‘O’ on a controller which will be needed to turn around corners.  You can also fire a laser with either rocket on the Moves, but on Ds4 you can only fire a single shot.  Each stage is a racetrack with 3 modes attached to it, the 1st is your standard race which pits you against 3 other drones while dodging obstacles on the track.  ‘Chase’ has you flying down a drone that is protected by 3 other respawning drones that give your target shields and must taken out 1st.  The last mode is ‘Extreme Derby’, which dramatically increases the speed of the race and only lets you take a limited amount of crash damage and is easily the hardest mode in the game.  No matter which mode you play, once you complete a course, you unlock the next course with every 3 completed culminating in a boss battle where you’ll need to dodge a flurry of incoming attacks.  Each stage has 3 trophies attached it which, as far as I can tell, just comes down to finishing a stage as fast as you can.  There are 2 additional stages that are only accessible after you have finished at least one mode on each track and all the stages are supposed to have attached leaderboards though I only ever saw one after completing the tutorial and couldn’t find them in any of the stages so I’m not sure if they are broken or just hidden very well. 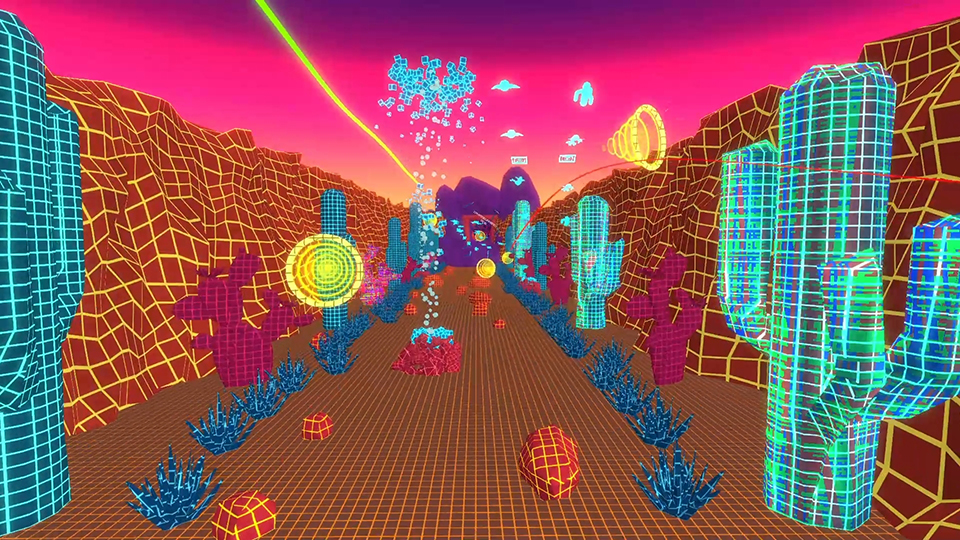 The stages come in a variety of themes

Everything in NeonHAT is inspired by Synthwave with courses coming in many different, abstract themes all being comprised of grids and geometric shapes, outlined with neon lines. You’ll be racing up mountain sides, across bridge, through city streets all populated with sometimes relevant objects like cars or giant pistons and gears while not so relevant items like holographic fish and toilets cruise along the general path you travel above.  The holograms won’t get in your way but some of those objects can definitely halt your progress with some appearing right before you like a geyser that spouts cubes of water, upside down traffic, boxes and a host more items.  Despite their dramatic differences, the art style had the courses feeling samey with the exception being those boss battles which will have you facing an armed ship, giant snake and a huge mech, all on a straight course while dodging their attacks and are the better looking stages in the game thanks the linearity in their design that avoids some of the issues that do hurt the presentation.  While some of the courses look a little more open than they actually are, when you come close the edge of the play area, a grid will show up indicating where you can’t move anymore.  The draw distance is also limited and while you won’t notice it during most levels, in some of the more open stages, watching the background come into view wasn’t a highlight moment for the game.  Besides that though, the game looks alright carrying with it a lot of retro/indie charm.

Synthwave is the name of the game here and that is prevalent in the soundtrack which I believe has a unique song for every stage in the game for a total of 14 very catchy tunes.  Every race had me bobbing my head to the upbeat and intense synthesized 80’s soundtrack.  Other sound effects are on point and while there’s not much else going on outside of the soundtrack, sounds of your jets and whatever attacks may be coming your way, it works, and I really didn’t have any issues with the audio design. 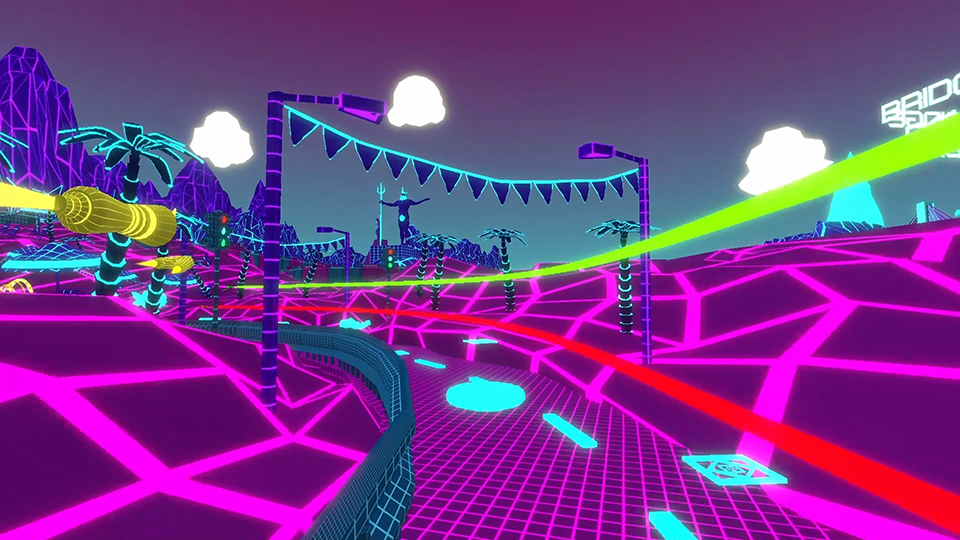 It’s not always the prettiest, but it’s got style.

NeonHAT is alright for what it is and it’s surprising we haven’t seen a racer like this in VR sooner.  I mentioned that playing with Moves is the better way to go and I think I need to emphasize that while the DS4 is supported, it’s really puts the player at a significant disadvantage as you now need to aim and steer with the same controller making boss battles near impossible and the chase mode way more challenging and in my testing, I couldn’t beat certain bosses using the DS4, and switched back to the Moves whereupon I bet them on my 1st try.  Some the races also go on way to long which I think could just come down the flight mechanics being a little too simple making the game feel a little boring, especially when you are just running the same laps 3 times over in every race.  I also found the turning mechanic to be incredibly clunky as it would slow down your speed but wasn’t fast enough to make those finer movements to hit all the speed boosts ahead of me and attached to that is a sort of drift mechanic that, when turning sharp enough for a long enough time, you’ll come out of a turn with said boost, but many of the stages are designed with turns that are too short to utilize that ability and in my experience, it seemed hard to trigger even on turns that did allow for it. There are 3 difficulty options for Race and Chase modes which speeds things up a bit but even with those options selected and the challenge increased, the more I played, the more monotonous it felt.  The boss battles are a nice change of pace as each requires a different strategy to defeat with the final boss being the craziest encounter in the game taking you back through all the courses you completed to get to it. 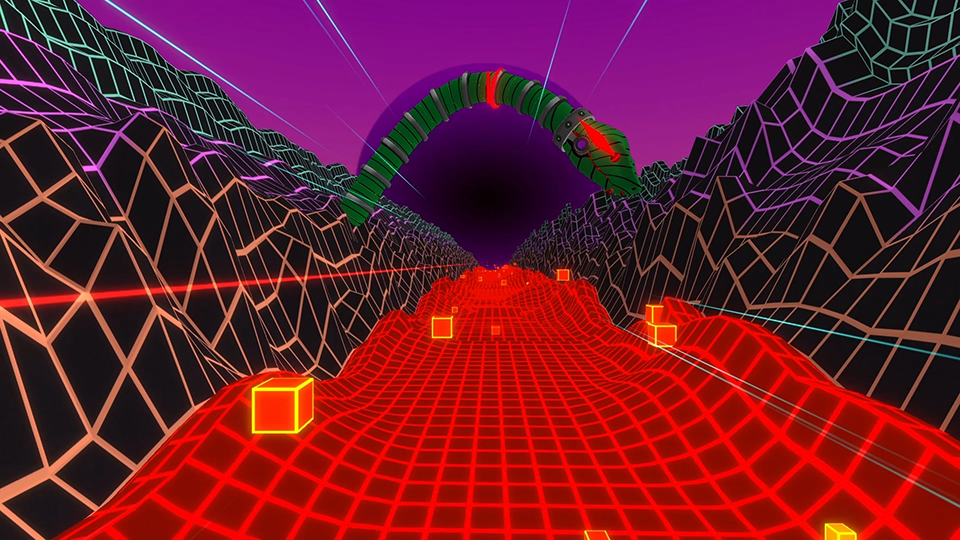 The boss battles can be fairly tough

I liked NeonHAT as their really is nothing like it available for the PSVR and uses the flight mechanics in some fun and creative ways.  There is a story attached to the game, as explained in some wordy text when you choose a stage, but it’s convoluted and easy to ignore as the mechanics really don’t fit with narrative anyways leaving us with a flight racer/shooter that includes 14 tracks and a few modes to play them.  The developers promise no sim sickness in this one and if you dig the retro synthwave presentation, including the kick-ass soundtrack, then this could be for you.

What would I pay? For me, this all falls apart with the $25 asking price as that is just to high for the content offered up here and the budget presentation accompanying it.  It’s fun but as I said, by the end of the game I was bored, making me feel like this should be somewhere in the $15 range instead.

Entalto Studios provided The VR Grid with a press code for this title and, regardless of this review, we thank them for that!