Maskmaker is the follow up title to Innerspaces’s previous VR puzzler ‘A Fisherman’s Tale’ which released allllll the way back in 2019.  I praised that game for it’s wonderful use of VR and scale-based puzzles though it was a fairly short affair and I craved more!  Maskmaker is a much larger game that has you assuming the role of a magic mask maker’s apprentice, tasked with continuing the work the Mask Maker had started many years prior. From the comforts of his little shop, you’ll have to unravel the mysteries of the masks and the world they transport you too. 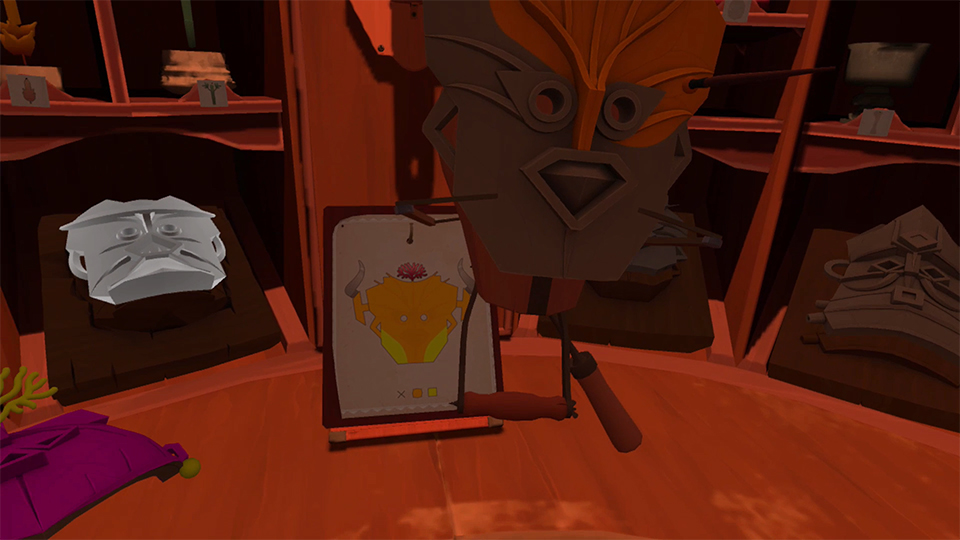 You never leave the mask shop or rather, your body never does, though by no means does this mean the game is small.  The core mechanic that pushes everything along is said mask making which is an in-depth and satisfying process.  Once you discover the creation room, you’ll be introduced to the process of mask making which requires you to have a basic blueprint for the mask whereupon you carve it out using a hammer and chisel and proceed to paint it and add the decorations needed to make it magical.  The creation station is nicely organized with cubbies for all the accoutrements you can add with the paints being located to your left and basins in front of them to mix secondary colors needed for more complicated masks.  Throughout the story, you’ll unlock more ways to customize your mask and options to design more complicated masks.  It’s a very clean and polished system that lets you paint the masks by touching sections to fill in those areas and once one is completed, they can be hung on a nearby, drop down wall to be grabbed whenever you need them. 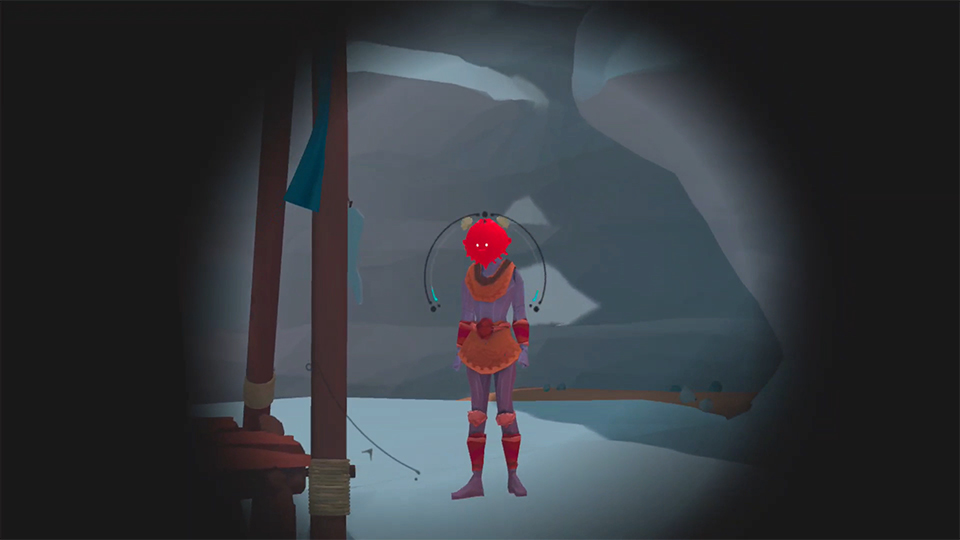 Use your spyglass to discover new mask designs.

Those decorations are hidden throughout a mysterious world only accessible by wearing specifically designed masks found inside the mask world.  The initial 3 base colors (red, yellow & blue) bring you to 3 different areas with each of those broken up into smaller sections only accessible by creating new masks.   This same formula continues in the 2nd half of the game when you unlock 3 more base masks, opening up 3 more stages to explore.   When navigating each world using full locomotion or teleportation (along with standard comfort settings) you’ll come across other mask wearing wooden beings frozen in place.  By summoning a spyglass found early on, you can effectively scan them, unlocking the blueprint for that mask and once created, allows you to teleport into and control that being.  The thing is, to make these masks you need to find those decorations hidden each world which may be hard to spot or are often blocked by environmental puzzles that are creative, fun & challenging.  In fact, whenever I did get stuck, unsure of where to go next, I knew to go back and revisit past stages as sure enough, I always found the missing item I needed for the next mask that let me continue on.

Some obstacles are as simple as turning dials on knobs in the correct pattern with others being much more complex like operating a series of dams or transferring potion ingredients from one mask wearer to another akin to games like The Last Clockwinder or Transpose, though here you won’t have to worry about timing but just making sure the beings are in the right place to retrieve or interact with an item.   While you steadily progress towards each worlds tower and beyond, you’ll also find items that elaborate upon the story of not just the Maskmaker but the mask world as well with ancient statues revealing that there may be more going on than is initially apparent, making for a game with in-depth mechanics and an in-depth narrative.  There is an auto-save system in effect though you can manually save as well to ensure no progress is lost. 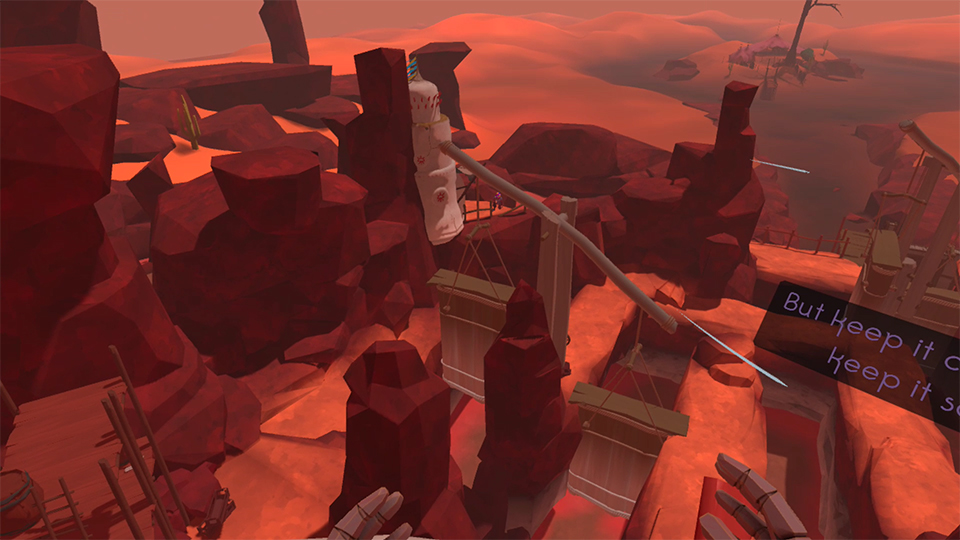 Some of the stages are fairly large.

The Quest 2 version of Maskmaker retains its wonderful pastel-like look reminiscent of games like Falcon Age or Fisherman’s Tale with a more minimalist and cartoonish art-style that looks great in VR.  For the mobile version it’s clear sacrifices were made with some noticeable pop-in and reduced texture quality, but for the most part, the game still looks great.  One thing that does take away from the game is that it appears to be a little darker than the other versions, something that doesn’t really get in the way too much save for when painting masks, a task I occasionally struggled with on the PC thanks to my mild red/green color blindness and I found that to be more troublesome in the Quest 2 version.  The colors needed for each mask are placed on the bottom of each blueprint, but I often found it quite hard to decipher red, yellow and orange so on more than a few occasions, I just had to trial-and-error my way through some masks until I found the colors needed.  One other note would be that the seamless nature of removing and placing masks on your hand to instantly transport you between realms now, unfortunately, has a short black loading screen attached to the process, hampering what was arguably one of the coolest features from the PC game, though unless you knew it was missing, I doubt you’ll miss it as the loading rarely takes for than a few seconds. 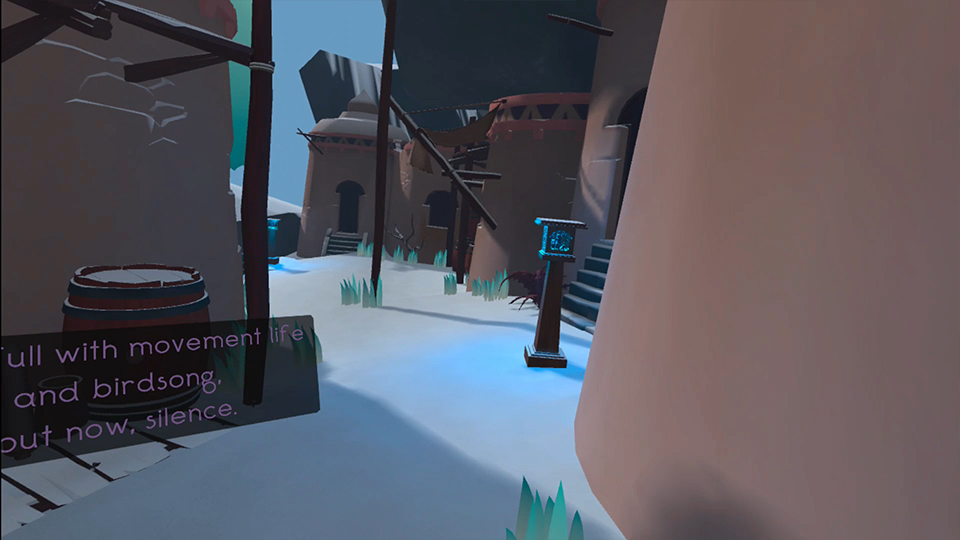 You’ll find many abandoned villages…but why are they abandoned?

When wandering the mask world, you’ll visit several major areas during the campaign which include a beach, swamp, mines and few others with all of them containing an array of smaller zones including various villages, a bamboo forest, caverns, cliff sides and a few more biomes that are a treat to travel through.  While the art style used can look a little stark at time, there is an attention and care in the details that make it all feel very authentic.  Abandoned villages have items strewn about and are in disrepair, the looming tower in the distance hints at the ominous happenings that affected this world before your arrival with each stage packed full of plants, debris, and details that immediately had me immersed in this game.  The mask maker’s shop is a compact little building packed full of all the stuff you’ll need to create your masks.  Creating new masks is a satisfying process not just because it’s so tactile, but also because the next magical mask you make unlocks the next section in your journey.  There is an overall refinement in the presentation here that makes it all feel very organic and while the game may seem to be quite small at first, once I unlocked a few masks, it soon became clear that it is much larger than it initially appears.

The care that went into the visual presentation carries over into the audio side of side of things thanks to some fantastic voice acting and ambient soundtrack which kicks in only when needed.  Accompanying you on your quest is the King of the mask world who elaborates on everything you stumble across and pick up.  His sombre and solemn tone carry with it a heavy burden and the undertones that he may be withholding information from you.  Back in the real-world, other masks hanging around the shop offer up advice about mask making.  3D audio is on point though there isn’t a lot happening at any given time with the soundtrack adding to the weight of heavier moments but falling into the background when you are just roaming around giving the entire game a nice cinematic feel. 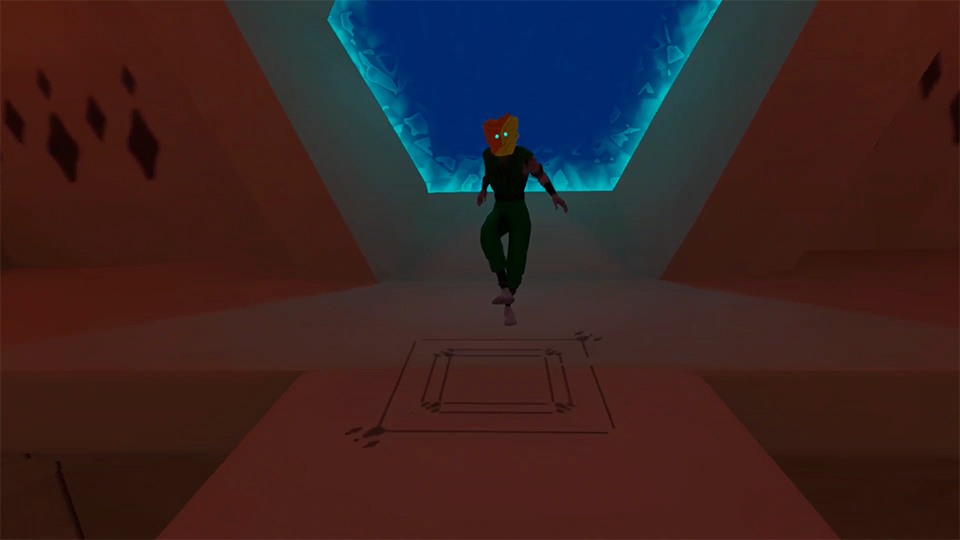 Are they friends…or foes?

Maskmaker is my kind of game offering up a unique take on puzzling by having you transfer from body to body, working with yourself to complete objectives.  As we see more clonelikes coming to VR, so far it’s been a treat to see how each developer utilizes that base mechanic with Maskmaker being one of the most engaging ones yet.  With a 6-to-8-hour campaign, a wonderfully in-depth narrative, pleasant visuals and clever puzzles, I recommend this to anyone on whatever they play VR on.  It’s an absolute gem!

Innerspace provided The VR Grid with a press code for this title and, regardless of this review, we thank them for that!