Loco Dojo has been around for over 4 years on the PC side of things, offering up some whacky mini games that can be played alone, or online with friends.  The Quest release looks to translate the entire experience to our stand-alone headsets, offering up some insane challenges and few ways to tackle them. 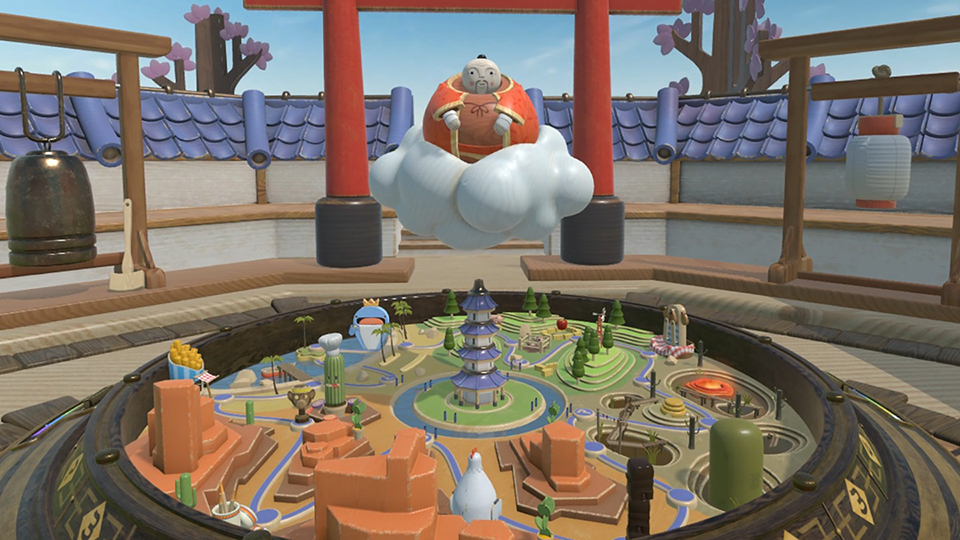 Controls are simple as you have 2-hands and must follow each mini-game’s instructions to get the highest score and a gold trophy to signify that you are in fact, the best.  There are 16 games to choose from with those games broken up into groups of 4 with each subsequent group being locked until you get a few trophies on the previous groups, which isn’t that hard to do.  You can play through the Solo Dojo mode,  choosing whichever games you want, provided they are unlocked, or you can play in Ten Trial Test, which places you in front of a game board and lets you play through 10 “randomly” selected games, sometimes the same one more than once, with the goal being to be the best and get the elusive black bandana, which requires you to get gold trophies on every game you play.  Should you have friends to play with, or can find some randoms, Loco Dojo supports up to 4 players in competitive action, having all the players in the same arena though some of the games change things up by having players compete in slightly different ways to having some players take completely different positions in the game.  The games are all bizarre and outlandish having you perform such actions like controlling a remote-control pig to collect apples, hurl javelins at a cactus in an attempt to spear floating food to it, launch cats at a giant dog’s tongue and a host more insane scenarios that never come close to being “normal” when it comes to competition. 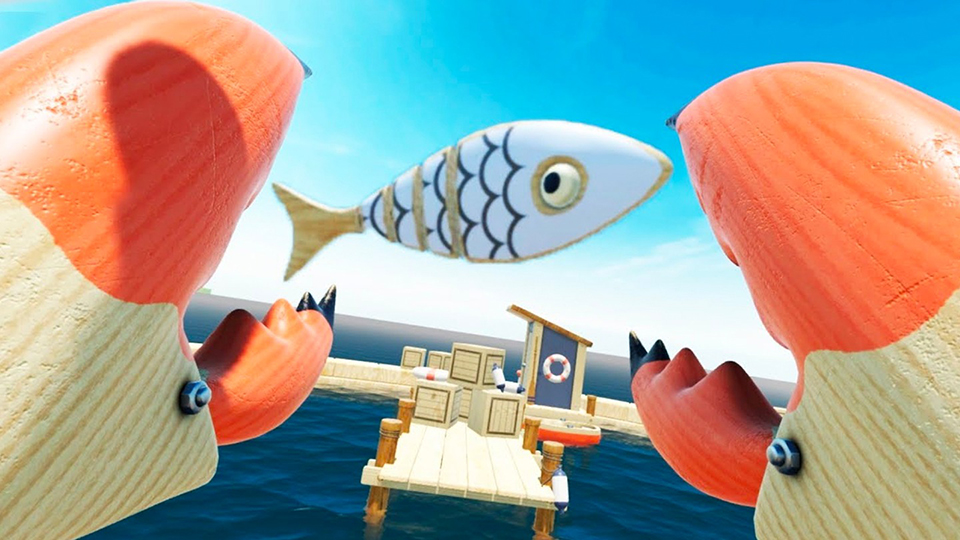 Catching fish with crab hands is no easy task!

Loco Dojo looks very sharp on the Quest delivering solid, cartoonish visuals.  3D modelling can look a little basic at times for sure, but the variety of what the game throws at you, the quality lighting effects along with the sheer wackiness of it all gives the game a ton charm and polish.  Some of the stages are fairly small, like the ‘Crab Catch’ which gives you 2 giant crab hands to catch fish with too larger stages like the aforementioned cat launching stage or ‘Way of the Sausage’ which has bats flying at you that you need to swat with a pair on sausage nunchaku.  It is that visual insanity that keeps the game feeling fresh as, until I played through all 16 stages, I never knew what the game was going to throw at me next. When playing in the Ten Trial Test you (and anyone else you’re playing with) surround the circular table which displays mini versions of the various mini games on the board with miniatures of yourself hopping around the board.  Whether it’s manning a potato shooting machine gun to shoot down seagulls, carrying a frying pan holding an egg while cacti try and punch it out of your hands or milking a giant toy pig with little toy piglets, the visuals carry each of these scenarios through to their end making for a fairly endearing title.

The Grand Sensei greets you at the games onset and pops up in between each game, deriding or praising your efforts based upon the trophy you did, or didn’t get.  The Grand Sensei is voiced by veteran voice and Shakespearean actor Brian Blessed and delivers an entertaining, if not repetitive, performance thanks to the minimal amount of dialogue recorded.  The soundtrack has only a 1 or 2, traditional Japanese inspired songs that are designed to fall into the background, providing some ambient tunes to accompany whatever it is you’re doing. 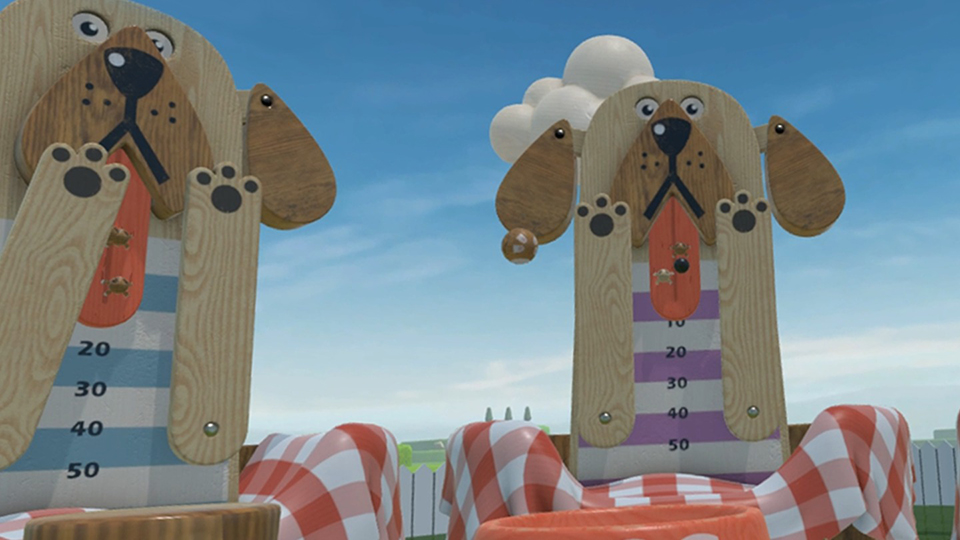 Multiplayer matches are where this game shines!

Loco Dojo is a solid collection of mini-games that does suffer from a few issues. The 16 games, by myself, took around an hour to get through and seeing what the next one will be was a treat, but once I had gone through them all, I didn’t feel much drive to return to them as I’m not much of a trophy chaser.  Being able to play with friends extends that game time substantially as it is much more fun to play with others.  When playing some games, instead of all 4 players competing in the same singles competitions, you may face each other instead. For example, one of the games has you spraying bait with chum to lure sharks away from eating you.  When playing with others you need to spray each other instead, slightly changing things up the from its single player counterpart.  Matchmaking is also a fairly bare bones affair with no real way to invite friends, so you’ll need to time and coordinate to play with your pals as the only way to join a match is to set up a random one and hope they join before someone else does.    The replay factor here will really depend upon the player as, for myself, this is more of a one and done type experience outside of the multiplayer.  Even playing the Ten Trial mode highlights this as the semi-random nature of the game had me playing the same stages again and while I did enjoy most of the games, there were a few that I really didn’t care for which also reduced the lasting appeal of the game…at least for myself.  Personal feelings aside, the games in here are overall pretty fun and if you do care about getting gold trophy’s, most of the games offer significant challenge as I only managed to nab 3 Gold’s with a bulk of games rewarding me with Bronze or Silver. 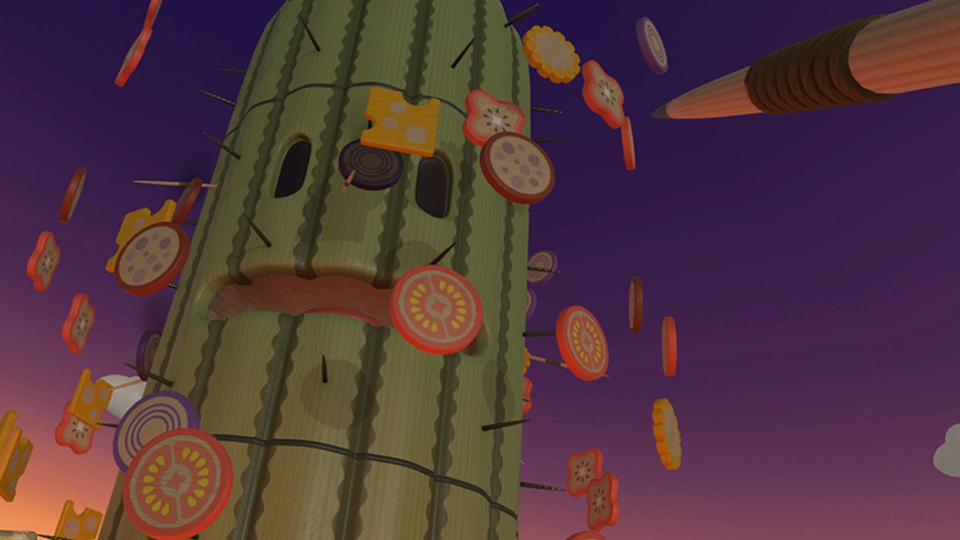 Easily one of the hardest games in here!

Loco Dojo ends up being a fun collection of mini games that really needs to be played in groups as it’s a ridiculous way to get competitive and have fun doing it.  The solo experience is still fun with the weirdness of each game providing ample charm and challenge.

What would I pay?  This is $20 US which isn’t terrible provided you plan on dabbling in the online action.  If not, then I suggest waiting for a sale as playing alone just doesn’t have that same fun factor.

Make Real Ltd. provided The VR Grid with a press code for this title and, regardless of this review, we thank them for that!