This takes me back to the cartridge days of yore when compilation collections abounded.  ‘100 games in 1’ the label would read, and if 5 games were good out of that 100, you were happy.  That’s not quite the case with Herocade, but it’s not far off.  A collection of 9 previously released mobile VR titles now arrives on the PSVR and although it’s not all hit, it’s a lot less miss than you’d think!  This is going to be a long review, but there is no way around that

Herocade does something I have never seen before in a compilation title, it adds a completely unnecessary, but welcome, story to help entice you into completing each games’ singular achievement/objective.  It’s the future, something has gone wrong and you must play through VR games from the early 21st century to help rebuild databanks and find out what happened to Earth.  I’ll break down each game below individually so let’s get to it.

This a 3rd person view of a ship as it hovers across the never-ending landscape.  Left and right are your only controls and it’s up to you to navigate through and around obstacles to accrue as many points as possible.  You can use a controller, which I thought worked the best, or you can use the look mechanic by tilting or looking left or right.  The visuals are minimalist and stylized and the catchy techno track accompanying you all work together wonderfully.  A few HUD warnings make you aware of what’s coming up and transitional hallways break up the multitude of different environments.  The replay value here is to see how long you last on your singular life and climb to the top of the leaderboards.  Fun and repayable! 6/10 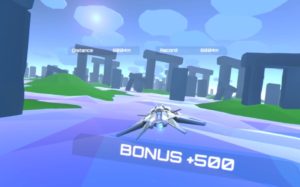 You’ve played this game before in titles like Call of Duty.  Zombies have taken over and it’s up to you, in your upgradeable heavily armed plane, to help the fleeing humans from running into the Zombie horde.  All the action takes place high in the sky as you look down upon 2 different maps, humans appear in green while zombies are black.  Timing is key as you zoom in on the ground below and dispatch wave after wave of Zombies.  You earn money for each kill and that allows you to upgrade, which you’ll need to do to make significant progress.  It looks good, but there isn’t much to look at as levels take place in a dusk setting with little to no details.  There is no gameplay soundtrack, just the hum of your plane and the sounds of hellfire raining down from above.  It does get old after a game or two and although upgrading and climbing leaderboards is the main goal, you’ll probably lose interest before you climb too high. 4/10 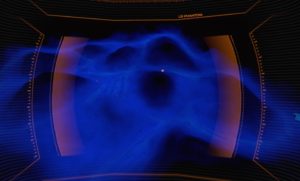 Your standard view of the action, you’ll have to zoom in to actually kill zombies

It’s Space Invaders, only now it’s in 1st person VR.  You control you ship moving in all directions on a singular plane, dodging enemy attacks all the while trying eliminate the alien horde before they get to close.  It gets nigh impossible around wave 6 or 7 and the sluggishness in your shots makes every shot critical.  Missing a single shot could spell doom for your survival.  Getting shot will cause death and a forced continue from the same point where you died.  If the Alien make their way to you, it’s game over.  The visuals are good considering that it’s an VR homage to a very old game and the techno tune accompanying it is great.  It’s a cool VR twist on the Arcade classic but wears out its welcome after a few plays, mainly because of the difficulty wall.  5/10 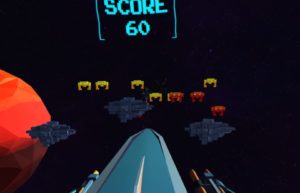 Care to take a drive down the 405…AS FAST AS YOU CAN?!  Like Polytron, though you control your speed and braking, you must tilt you head to steer your van down a highway without colliding with any vehicles. At max speed, it damned fun and challenging.  Included are 3 modes, One-way, Two way and Bomb Bus.  The 1st 2 are self-explanatory, the latter is ‘Speed’ homage with you navigating a bus that’s can’t go below 50 MPH.  Thankfully you can take a few hits in this mode, but too many and the bomb explodes.  Avoiding traffic refills your health and allows the you/the bomb a few more collisions.   The visuals here are cartoony and minimalist, but the mechanics at play are solid and fun.  This is a rudimentary VR game that would be great to share with friends, just to see who could last the longest ride and the highest score.  6.5/10 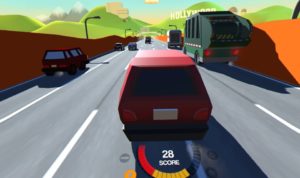 Mindless fun…at its most mindless and fun!

This throws you to the wolves without any explanation.  You play as a raccoon (or something) and are tasked with pushing different colored gummies on to their corresponding pads.  The challenge lies in each of 36 level’s grid based layouts.  Every level only allows for a certain amount of turns and because of the map setup, you’ll be forced to think hard before committing to too many wrong moves.  There is an undo button here, but that still uses up points so be careful.  The levels don’t appear to be in any order so feel free to try another if 1 stumps you. It’s a typical 3 star reward system here, and despite the cutesy, bare bones visuals and annoying audio (the beeps and boops will grate at your soul!) there is a lot of content and challenge here…if you like that sort of thing.  6/10 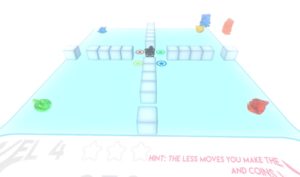 The puzzles that look the easiest typically are the opposite of that.

Shooting cardboard cutouts of cartoon turkeys may sound a little on the weak side, but this was great fun.  Armed with very realistic weapons; pistol, shotgun or automatic rifle, you must fend off wave after wave of increasingly difficult turkeys.  Headshot still count(mostly) and the posts left behind after a successful kill(?) slow down the enemy advance.  Money is earned after each successful kill and is used to unlock weapon upgrades.  Combine all that with 3 successively difficult levels and there is a lot of depth in this wave shooter.  There may be other “scary” games in this collection, but those damned Turkey’s will haunt me in my dreams! 7/10 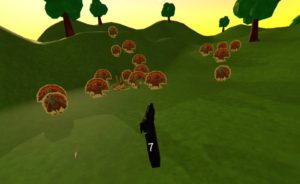 Sweet dreams are made of these(think the Marilyn Manson version)

The other wave shooter offered here I was less impressed by.  As the title states, you must survive endless waves of dinosaurs, all out to consume your meaty pink flesh.  The visuals here are way more realistic, and 2 move controllers are supported; 1 for the gun and 1 for a flashlight.  In an attempt (I assume) to ramp up suspense there can be a lot of lulls in between action while you wait for the next dino to show up.  With only one, very dark, map available you quickly memorize where the prehistoric predators come from.  They barely react to getting shot, besides dying, and the difficulty never seems to ramp up.  I also had tracking issues with the smaller dinosaurs at my feet, though the shotgun remedied that somewhat.  It’s alright, but plays itself out long before you reach the required achievement score.  I won’t be playing this one again. 4/10 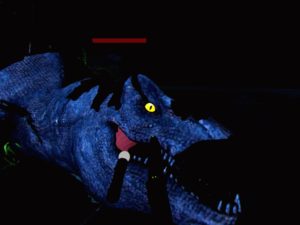 The first time you meet the T-Rex is pretty daunting..the 20th time, not so much.

This is not really a game, more of an interactive (very!) short story.  It’ll take you about 5 minutes to complete and you mostly just shine a flashlight around in a small room and watch events unfold around you.  It has a cool creep factor but there is no reason to play this more than once, unless you were looking down the whole time.  3/10 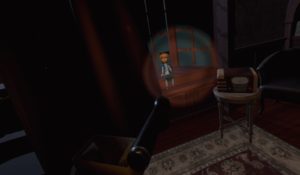 Spoiler Alert! This “game” is so short, any pic I post is a spoiler.

The largest most “complete” game in this collection, Dreadhalls has you exploring creepy dungeons in search of eyeballs that are used to unlock new sections and advance the story.  Equipped with only a lantern, lock picks and a map; you must navigate through the maze of hallways and rooms in search of answers as to what this place is, why you are here and how to get out alive.  The levels are randomly generated so you’ll never play the same map twice.  Even upon death and restarting from the last checkpoint, you will be given a whole new map to explore. 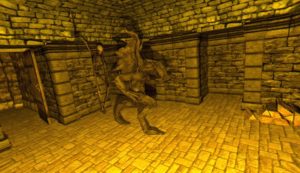 Remember what Mario games have taught you, that’s all I’ll say about these guys.

The biggest draw here is the scare factor.  While the visuals are in no way amazing, the devs have gone out of their way to capitalize on the creep factor.  Every enemy encountered needs to be handled in a different way, whether that be averting your eyes, turning off your lantern or just fleeing.  Walking through a safe room, only to turn around and see a looming creature will scare you way more times than you would think.

This plays almost identical to ‘Here the Lie’ (review here) only more of a lite version.  Coins collected around each level can be used on mounted, stone heads to request and answer to 1 question, shedding light on your surroundings as well as notes picked up on your journey.  This is fun, eerie and intriguing and almost justifies the price of this collection on its own…almost. 7/10

In summary, this is a great collection of 8.5 games.  For the most part they are short, singular experiences, but the added story element pushing to get each games goal ensures you’ll play this a lot more than intended.  Most of the games have a ‘just one more time’ addiction factor and the simplicity and variety of the titles here make sure there is something here for everybody.  While not one title stands out as amazing, they are all fun in their own way and offer a ton of value for the price.

What would I pay? $15 is a great deal, I’d even pay more (but don’t tell anyone).   This is a great compilation overall and shows off some of the good games available for the less powerful VR headsets.

Lucid Sight Inc. provided theVRgrid with a review copy of this game and, regardless of our score, we thank them for that!