I am all for innovation and new ways to experience games and media, both in and out of VR and this is definitely something I have never played before.  I personally had no knowledge of this title so after a quick google search, here is a quick summary: Hatsune Miku is an artificial performer, besides some voice sampling, all the words and sounds coming out of her mouth have been generated by a program.  It’s kind of cool in an abstract, I don’t really care about this, kind of way. 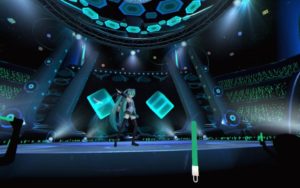 You get the best view in the house…too bad that’s about all you get.

Anyways, this is a rhythm game that has you front and center for a “live” concert featuring the titular character.  Utilizing either 1 DS4 or 1 Move controller, you are required to move the baton you are holding in the same motions as the crowd around you.  Queues tell you when to be ready for the next change in action.  The movements themselves consist mostly of side to side or front to back motion with a very rare mix up of a circular action.  It all works, though I found the game to be incredibly forgiving when it came to timing.

The game looks perfectly fine.  You have no body and the crowd around you, regardless of lighting, is always just in silhouette. The performance itself is a poppy, flashy performance with lights and lasers as well as floating hearts and shapes that you just couldn’t experiences in a non-vr performance.  Hatsune Miku dances around the stage with choreographed dance moves making this a top notch pop performance.  Her stage lifts off the ground and you as the audience member can switch positions in the stadium to get the best view.

If that all sounds good to you than I’m sure you’ll enjoy this, regardless of my following statements.  First off, the music here is Japanese pop, so while they are catchy pop tunes, unless you speak the language, it’ll be pretty tough to sing along.  The rhythm games themselves are sporadic during performances and so forgiving that there is almost no challenge to them.  Even the sections requiring you to sing along can be bypassed by just humming along.  I also found the songs tended to blend together, and my lacking of the Japanese language didn’t help that either.

Though this game appears free in the PlayStation store, it isn’t (though there is a free demo).  You must purchase the stages individually as DLC.  Each stage consists of 7 songs and each play through(or set) will have you experiencing 4 tracks(including a private show).  Every time you play through a set you unlock a new outfit for Hatsune Miku as well as changeups to your baton.  Upon unlocking the lightsabre I quickly tried to swipe at those around me, and when that failed I tried to stab my head…to no avail. 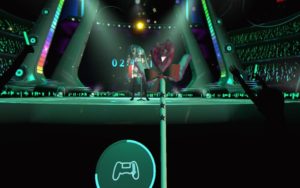 The problem here is it just gets boring and you see all this game has to offer within one track.  The costume unlocks and baton mods are superficial and don’t change up the gameplay in any way.  Repetition sets in fast and though the songs may be catchy in a pop kind of way, they aren’t my style of music.  After the 1st song I basically just stood around for 3 more tracks, shook my baton, hummed some notes and wished I got a review copy and didn’t shell out my own money.

This is a super niche title, and I’m sure if you are into Hatsune Miku or other karaoke-esque games than you’ll probably find a lot more value here.  I think for the majority of people out there this is an experience best left avoided.  It just gets boring so fast, the rhythm sections barely constitute a game and everything else here is superficial and adds nothing to the overall experience.  Booorrring!

What would I pay? I straight up wouldn’t pay $1 for this title.  It’s not for me at all.  If you are at all interested, download a demo or watch a video, but for those unsure, just stay away.