You may not know the name Harmonix, but you know their work.  After quietly making their debut with the highly influential Frequency, they went on to create Guitar Hero a few short years later. Then, after Activision took over the GH franchise, Harmonix went and created Rock Band.   These guys know music games.  Now, they bring their audio expertise to the PlayStation VR and while I can’t say the experiment was wholly successful, there are a couple of modes that nearly redeem the experience. 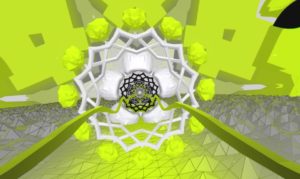 The Trip is properly named.

Harmonix VR is a collection of 4 experiences: The Beach, The Dance, The Easel, and The Trip.

All four titles allow you to use the small selection of included tracks (some from the recent re-release of the company’s own Amplitude) or you can import your own tracks through a USB stick. You select the mode you’d like to play, choose your tracks, and go.

You’re on a beach. The music you select plays. There are limited interactions with the environment, but overall, this mode is boring.  I guess if you’d like to chill out, but it’s too stylized to invoke any sort of “I’m at the beach…whoa” reactions.

You get a diorama-style view of a high school gym, populated by friendly monsters looking to dance and party.  Using the move controllers, you can create a short sequence for each character.  Then, like a gif on a loop, it will repeat that dance sequence indefinitely.  Kind of fun, but it fades quite quickly.  Maybe your little sibling or offspring will enjoy this beyond five minutes.

The best way to describe this is a lite version of Tilt Brush on the HTC Vive. At its core, it’s a 3-D drawing / sculpting program. You can choose from a few different lines, squiggles, and other strange pulsating objects, and create works of art that move with the music- which is required while you’re imitating Dali.  Using the move controllers, you can grab and reposition your art in the virtual space, as well as move around it, to a point. Despite some limitations, the move controls perform reasonably well. Probably the best reason to pick up Harmonix VR.

Aptly titled, The Trip is an enormous virtual kaleidoscope that you glide through the center of.  The effect can be overwhelming, but absolutely impressive.  This is definitely a nice showpiece for the PSVR, even if its effect is brief.  Uploading your own tracks and watching the game quickly translate them into a kaleidoscopic masterpiece is a lot of fun. 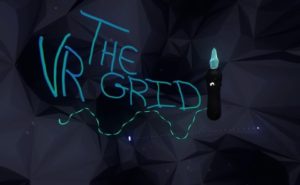 Simple but fun, The Easel is worth checking out.

I picked up Harmonix VR based on the appeal of The Easel. The Trip is a nice diversion, but the other two modes are generally worthless IMHO. While we’ve had some fun at my household using the Easel to play a makeshift Pictionary using the Social Screen, it’s not fully up to the task.  Ultimately, Harmonix VR just makes me wish for a PSVR port of Google’s excellent Tilt Brush.

How Much Would I pay For it? $9.99 feels more appropriate. $14.95 US doesn’t feel like highway robbery or anything, but I can’t say this is a game packed with value either. If you’ve already run through all the titles in the slowly growing PSVR catalog,  and you’re craving something to draw with, go for it.  But you might wanna wait for a sale.