GoalKeepVR is an extremely simple, physically active, soccer game (or football if that’s your jam) that’s fun to come to every so often, but is overall as simple and low on content as it looks. You’re placed in an empty, low-res environment in front of a soccer goal and must block balls from flying into it. Full disclosure, I don’t play soccer, I’m not a particularly huge fan and I’m skeptical that this is particularly realistic. The gameplay is limited to using your marshmallow-looking hands to defend the goal in a way that feels almost like Pong in VR. 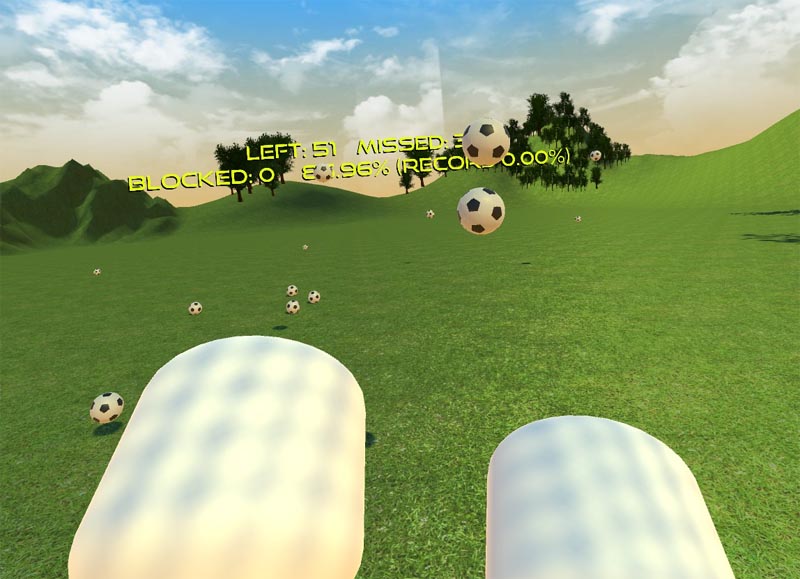 Finally, a slow-mo game mode which I’m not terrible at

The one thing that I don’t doubt the realism of, is the speed at which the balls hurl towards you. I was thrown off by how overwhelmingly difficult this game is. Just as I’d expect from a goalie, this game demands you quickly jump in all directions, responding to balls at a moment’s notice, sometimes almost hitting my ceiling. Once I got familiar with the game’s mechanics and what to expect, however, it got way easier. It’s still a challenge, but GoalKeepVR is a high score attack game. You can pick one of many modes (of widely varying difficulty) which separately keep track of your skill in deflecting balls. Some are variations on the basic goalie formula: such as a mode where the balls gradually increase in speed, an extra-long “endurance” mode, or the brutally challenging “bullet” mode in which the balls slingshot towards you in a straight trajectory. There are some more obscure modes, such as an Audioshield-like situation with color-matching balls and marshmallow hands, a mode where said marshmallows start out huge and shrink over time, or where the soccer balls start out huge and follow the same process. These last three were the most fun for me, tempting me to come back and try to beat my high score over and over again, and to play more GoalKeepVR. Sweetening the deal further, there are some joke modes: such as the aptly named “kill me,” which barrages you with an impossible amount of balls, or the “silly” mode, which replaces most balls with random visual assets such as fish or fruit or furniture. These don’t do much for the game as a whole, but for such a low-budget title, their presence is fun enough to laugh at. 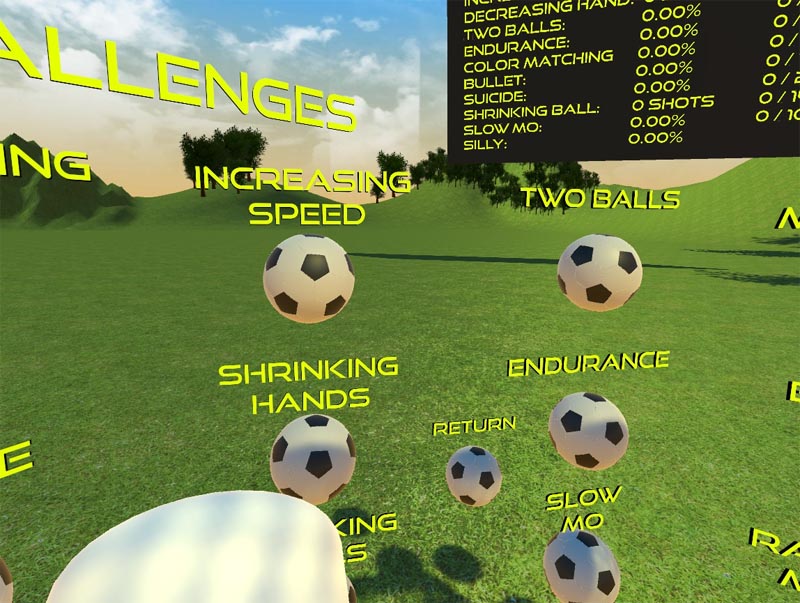 This is really all there is to be said about GoalKeepVR. Due to its intense athletic action, I have no doubt this was intended as a workout game. I was soaked in sweat by the time I finished. Unfortunately, my threshold which considered the game “finished” was crossed after playing a full round of each mode at least two or three times- and, by the time I reached this point, Steam had logged a mere 23 minutes into the game. Still, as a high score game with a huge number of modes, it’s worth revisiting many more times. I also feel like this could be a great VR party game: not only do I have many friends begging the question “do you have any sports games??” but GoalKeepVR is legitimately fun and thrilling, for the time it lasts.

What Would I Pay?  Unquestionably I’d pay at least $5. If it lasted more time or had a more professionally-designed environment, I’d consider $10 a reasonable price. And this is why I’m giving GoalKeepVR my praise: it’s currently listed as $3.99. For less than the price of my daily large Starbucks iced coffees, this game is an absolute steal. It’s a joy to play, and for a replayable high-score attack, I would absolutely recommend it for $4.