I always look forward to the next VR real life “simulation” experience.  Whether it’s climbing Everest, touring the Titanic, wing suiting down a mountain or just playing some carnival games, no matter how simple or complicated the task, I’m curious to see just how close the VR experience emulates the real thing.  Often times, I’m left to guess just how close an experience is to reality, but in the case of casual sports, I’m pretty familiar, and as a guy who enjoys the occasional round of bowling, I was excited to see a brand-new bowling experience come to the Quest in the form of ForeVR Bowl. 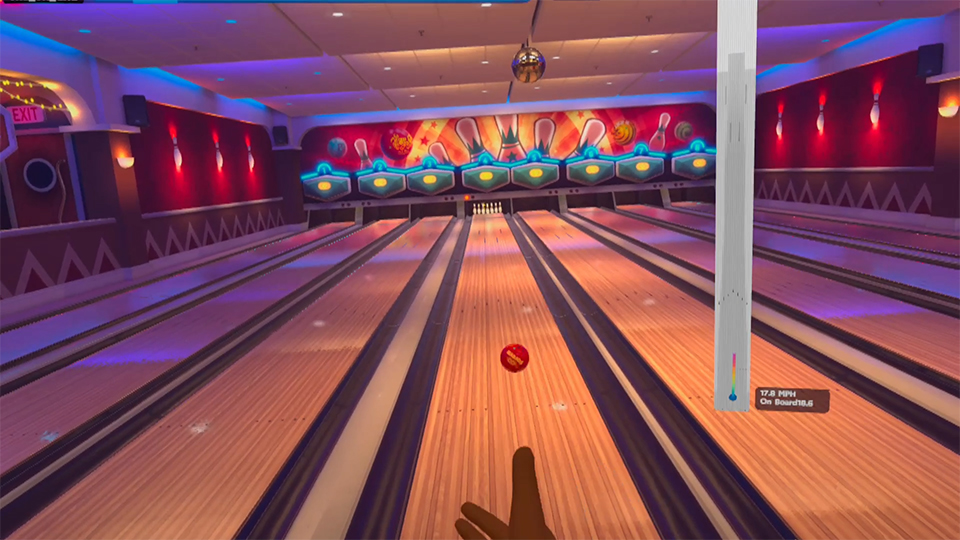 I’m pretty sure you know what to do!

If you have ever bowled in your life, then you should know what to expect here and while you can play this relatively stationary, for the best experience a little bit of room scale goes a long way into the adding to the simulation factor.  When not bowling you can navigate a hub area that lets you choose your next game, view your trophies and achievements and change the 5 balls you bring with you to the lanes.  You can also move around the individual stages so if you want check out your surroundings and not bother to bowl, you can! Unfortunately, it’s teleportation movement and click-turning only with the only comfort option at release being the angle of said click-turn.  Not the end of the world as the Quest offers untethered freedom, but not seeing these options in any VR game always disappoints me.  After a tutorial that breaks down the controls (basically grab a ball and toss it) your free to play in unranked games, ranked games, practice, online and party mode which let’s you play with up to 3 other players in some multiplayer shenanigans.  There is a level up system in place that not only gives you bragging rights, but unlocks more balls, ball designs & stages to play in.  Your ball selection is important as each ball has its own stats including speed, spin, weight and some bonus effects and, in my experience, some balls definitely work better than others when it came to my own bowling style and form.  It’s all about getting better, climbing leaderboards and unlocking all those balls making for a bowling experience that is largely simulation, but throws in a bit of arcade fun. 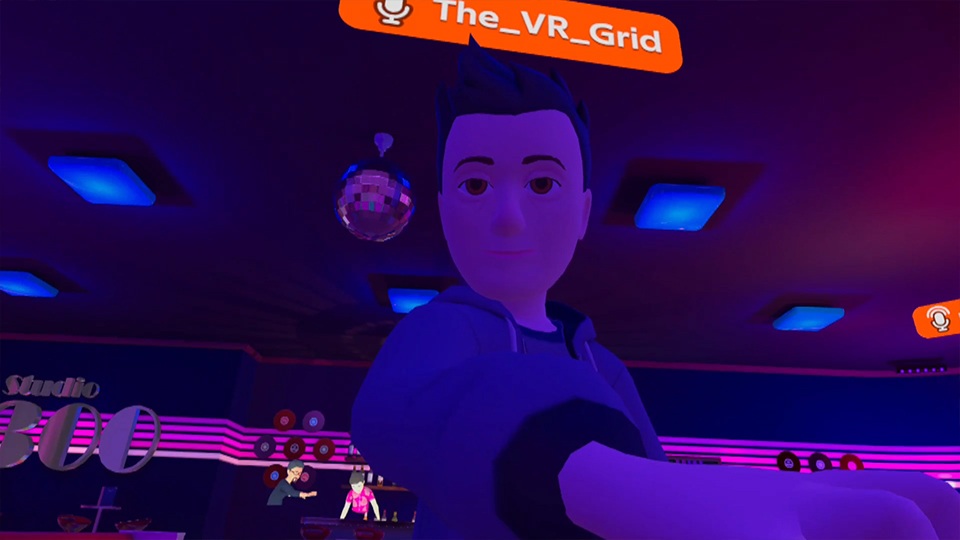 The game uses Facebook’s avatar system, further immersing you in the game!

ForeVR Bowl is a game that aims for casual appeal as is apparent by the friendly, cartoonish art style.  The first environment you find yourself is a 90’s style bowling alley ripped right out of favorite cartoon or movie.  NPC’s are all around you, some chilling behind you while others awkwardly bowl on either side of you.  I say awkwardly as their lanes don’t have pins making their actions look quite silly.  Outside of that though, the environments look nice and range from that traditional bowling alley, the moon, a disco themed alley, a boxing ring, tropical paradise and your own private alley.  Each of these environments (at least the ones I unlocked) look great and have a ton of little details that make them all fun and inviting like a dance floor, tiki lounge or just a nice foyer.  The reflective surface on the lanes looks realistic enough and the balls have a ton of design options, including some pop culture references from the past.  NPC & Player avatars use the Facebook Avatars (2.0 version) which gives everyone a fully animated body minus anything below the waste and animate quite nicely

The sounds of the alleys are all on point and it’s satisfying to hear your ball impact with the lane and roll toward the pins.  Ambient noise occurs all around you, adding to the illusion that you are playing in a more public settings and when playing online, you can chat it up with whoever you’re with making for a wonderful social experience.  Surprisingly, the soundtrack is not just generic filler music but has some licensed tracks which is awesome save for the fact that there just aren’t that many of them.  In the 90’s Bowling Alley, you’ll hear the same 5 songs over and over again and while it was awesome to hear ‘Semi-charmed Kind of Life’ & ‘Final Countdown’ in all their cheesy glory, after hearing them for the 4th time in less than an half hour, I longed for some forgettable background tunes.  When it’s not licensed music, it is some thematically correct stuff including some light electronic music or even a ukulele jingle and while those quickly fall into the background, they never annoyed as much as ”Eye of the Tiger” playing for the 30th time…with and without vocals. 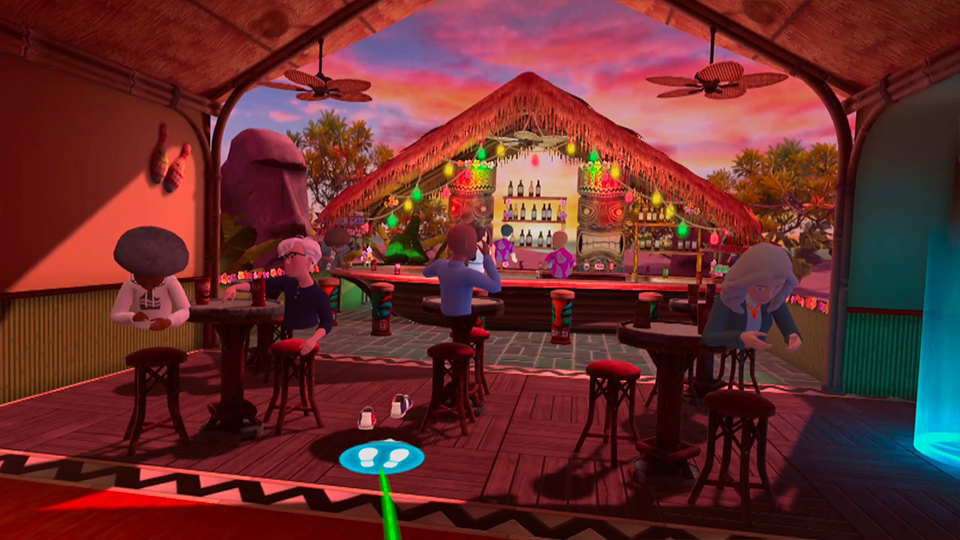 Sick of bowling…why not chill out at the tiki lounge?

Like many ‘simulation’ type experiences, the greatest hinderance to immersion is the lack of haptic feedback and I don’t mean in the vibration of the controllers, that’s just fine, but in the fact that said controllers just don’t carry the weight and feel of a bowling ball.  Obviously, this isn’t possible, I get that, but the divide between the virtual and the real is still present and highlights the limitations of current generation VR.  That little statement out of the way, ForeVR Bowl is a ton a fun and a blast to play with others.  Everyone plays on an equal playing field and despite the lacking weight of a real ball, the nuances in controls and how you throw still make this feel quite authentic.  Twisting my wrist too much or just throwing oddly would more often than not get my ball in the gutter fast, but once I focused on keeping my tosses consistent and using the lines on the alley, I noticed immediate improvement and couldn’t help but think ‘that is how I bowl in real life!”  The balls you choose will affect your throws as will the oil pattern on the floor, and I noticed that the faster ones often went wide, and I suspect it’s going to take some more practice before I can use those efficiently.  To unlock the stages and balls is going to take a fair bit of grind, especially when some balls also cost earned in-game currency as well, but no matter how you play, every time you finish a “set” you’ll accrue some experience, so it always feels like you’re progressing. 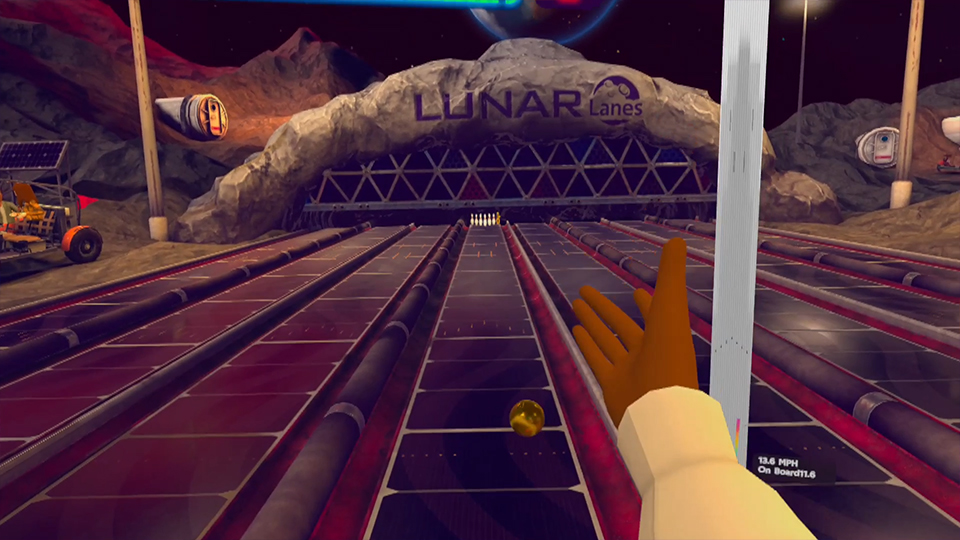 ForeVR Bowl is bowling in VR done right.  The arcade spin on this may turn off some of the hardcore bowlers out there but for those looking for some casual fun, with or without friends, this is exactly that.  Weekly and local leaderboards will sustain those of us who are a little more anti-social but still like competition and unlocking all the stuff is rewarding, but the true fun really lies in playing with others and seeing just who the best bowler is!

What would I pay? It’s bowling in VR and works great.  I’m totally fine with the $20 US asking price on this as offers a fair bit of bang for your buck plus the developers have assured me that locomotion and custom music options are in the pipline plus a bunch of other content!

ForeVR Games provided The VR Grid with a press code for this title and, regardless of this review, we thank them for that!