For that that aren’t aware Eolia is the follow-up title to 2021’s ‘Rhythm of the Universe: IONIA’, a short adventure based around saving the world from a vile threat while solving various music inspired puzzles.  Eolia is an entirely new adventure in the same universe, once again placing you in the role of a young hero who must save the land, this time from a great storm. 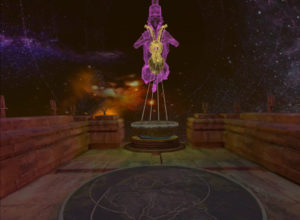 It starts off with a musical dream.

As Conga Dholak, you are introduced to the game and world via an interactive dream sequence before waking up to begin your new adventure.  The opening moments teach you the basics of controls and before too long you are riding on the back of a Bantha type creature and must race to safety as a surprise storm chases you to the village of Kundar where a bulk of the game takes place.  From here you’ll be treated to conversations with the locals, platforming sections and music-based puzzles that lead you on a chase to collect the items necessary to save the day though unfortunately, that’s a lot easier than it sounds. 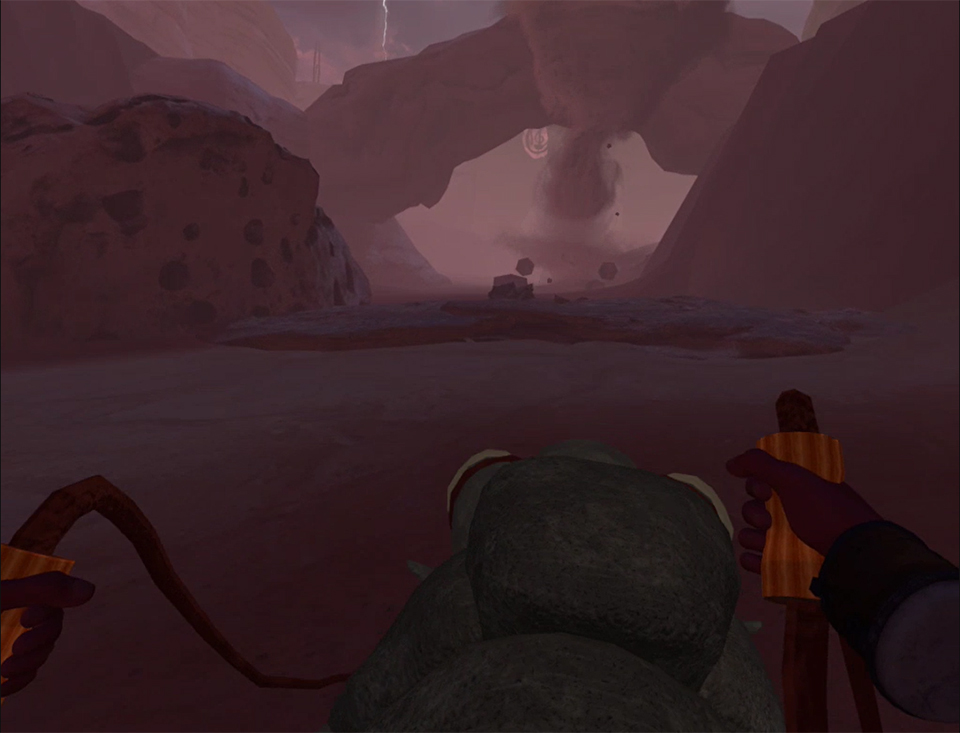 It’s in your best interest to avoid these cyclones.

For starters, Eolia seems to pride itself on being a first-person adventure puzzler that utilizes hand tracking for all it’s interactions and is proof positive that hand-tracking has a place, and it’s not in a game like this.  To move you need to pinch your left-hand thumb and pointer finger which creates a digital thumbstick that allows you to walk.  The Right hand does the same and that lets you turn and to bring up your menu, place both hands in front of you, palms up to display your logbook, instrument & inventory.  Grabbing at anything is simple enough and in truth, individually each one of these mechanics works BUT as soon as you need to start multitasking, trouble ensues.  Walking and jumping is hit and miss, selecting options in your log book is a nightmare, grabbing at an item while your inventory is open may cause you to grab the wrong thing, forcing constant retries to do what you wanted to do in the first place.  As much as I tried (and the game told me too) I ended up using the Quest 2 controllers, which worked far better, though some of the issues I had still popped up thanks to the clunky menu system.  When in conversation, text boxes will pop up and to select your response, you with either have to touch or look at what you want to say and make a fist which didn’t always work causing missed selections or skipping dialogue. Other elements fair much better with the climbing and platforming sections behaving as they should and many of the puzzles being easy to interact with using either control method. 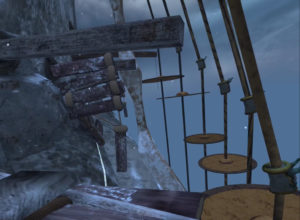 There are a few climbing and platforming sections you’ll have to content with.

My praise for IONIA was based largely on the higher quality visuals available on the PC version of that game so it is disappointing that Eolia is currently a Quest 2 release only.  I won’t hold that against the game as it’s not fair to compare PC and Quest in this regard, but that doesn’t mean this is a great looking Quest 2 game because it’s not.  Some of the stages are quite large in scale so texture quality and details tend to be reduced but also lacking are dynamic lighting effects making everything in here look extremely flat & dated.  With games like Red Matter & Tales From Galaxy’s edge setting the bar for the platform, it can be jarring when games fall far short from those levels.  Counter to those shortcomings is an array of locations that do make this world feel alive and somewhat fleshed out.  Large towers, catacombs, desert landscapes and a few more areas are quite impressive in scale and are populated with various detritus fitting for each setting.  Other elemental effects and NPC designs can look a little dull or just “off” making for a game that may not look terrible, but by no means does it look impressive in any way.

As music is the core of this world, the audio design thankfully shines with an impressive and original soundtrack that sounds like something composed for a film.  Even if I disliked a song, I couldn’t deny the quality of the overall score though if I spent too long in some areas, those background tunes did repeat a little to often and become grating, but that’s really my only complaint when it comes to the audio design.  The people you interact with are fully voiced by actors who are definitely putting their all into each performance giving a nice cinematic quality to this little adventure. 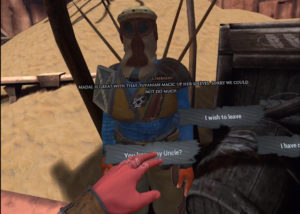 Conversations can be cumbersome to get through.

Eolia attempts a variety of gameplay elements and while some are serviceable, others are downright convoluted or just fail in execution.  It’s very clear that the devs have made a world here rife with history, settings and stories but because of the unique language used for settings and people, it can be very confusing to keep up with the story as everyone/thing has an name that’s not quite easy to remember and many places and people are mentioned with little to no context and may even be referred to by different names.  The Quest log, which highlights current objectives, can be so vague at times that I was unsure of where to go more often than not and only found my next objective my randomly walking through the game.  One Quest told me to go to Sonarium Tower though I had no idea where that was as the only tower I had been too was referred to as the ‘Lightning Tower’ and as it turns out they are one and the same, though I only learned this after speaking to the devs. Items and collectibles are scattered around the game for those that wish to explore every nook and cranny though unless they are quest items, are relatively useless with potions that increase your speed or jumping abilities and are only needed to make the platforming sections a little easier, find bonus items or hop out of a glitched area, which happened on a few occasions. Early on you pick up a flute and find sheets of music that you can play to teleport you to all the areas you have visited and use special powers which is a great idea except that the flute is missing pieces to play those notes and you don’t get them until close to the end of the game when there is almost no reason to travel back and forth except to find those hidden collectibles.  It would have been amazing to have that ability way sooner as opposed to randomly back tracking to different areas and just have the ability scores unlocked later in the game.  When you can talk to people, you need to explore all narrative paths, making the illusion of choice useless, as you’ll have to trigger the right conversation to be able to access the next area, an issue that held me up twice in my play.  I know puzzle games can be subjective when it comes to challenge, but I just feel like the overall design here needed a little more TLC and objectives needed to be elaborated upon a little more clearly as even when I did find a puzzles solution, I was often still confused as to what I was supposed to do next. 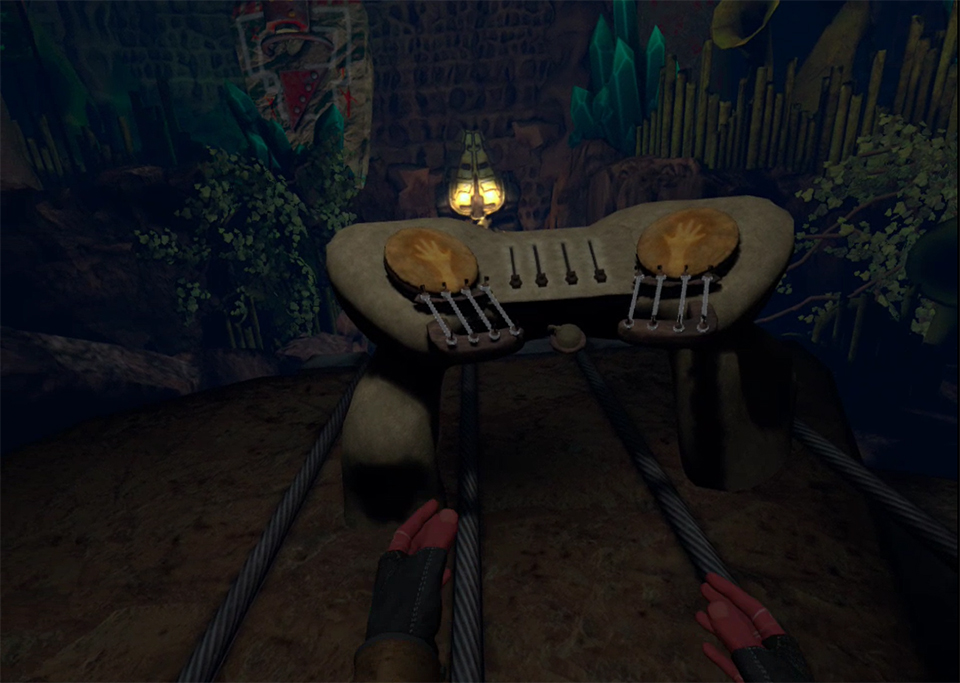 Almost every puzzle is musically inspired.

I feel like Eolia, gameplay-wise, is a small step in the right direction for the franchise as a whole, but is bogged down by poor controls and an overly complicated world that becomes to easy to ignore thanks to in-depth and erratic story telling  It’s taken me almost 6 hours to beat the game but in all honesty, I bet half of that was me getting stuck at some point or another, unsure of what to do, battling controls or just getting stuck at a puzzle.  It can be a lot at times, confusing at others and when I did progress, it felt more like guess work and left me feeling unsatisfied or unaccomplished and in a puzzle game, that’s just not right.

What would I pay? This is $14 US and, this may sound insulting, but it feels like a $14 game.  There is just too much going on here with the developers trying to make an epic game with too many mechanics in a complex world that’s hard to digest utilizing a control scheme that just doesn’t work.

ROTU Entertainment provided The VR Grid with a press code for this title and, regardless of this review we thank them for that!