IT’S TIME TO GET OUR PUZZLE OOOONNNN! ChomraGun was actually releases almost 4 years ago and received some positive attention for its unique use of color to solve more and more complicated puzzles.  You play as a homeless person (I’m not kidding) picked up by the company Chromatec. They have armed you with paint canon for lack of a better term and task you with entering test room after test room where you need to change the color of the walls. floors and robots to activate switches to open doors to get you to the next room, like a lab rat,  while some sarcastic scientist bemoans your efforts. 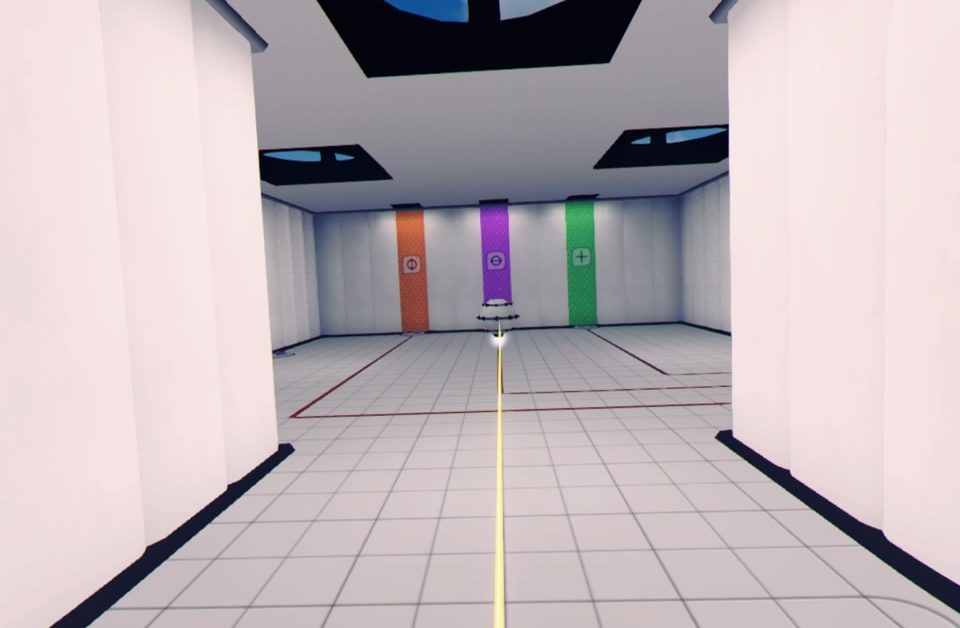 The Aim controller and DS4 are supported here and both work as they should but I preferred the Aim controller as it offered better tracking.   Chromagun controls like a typical FPS only instead of trying to destroy bad guys with your weapon, you are simply changing their color.  Your weapon, once you unlock its full potential, can shoot 3 colors; Blue, Yellow and Red and you can shoot one of those primary colors with another color to make secondary colors; Green, Orange and Purple.  From here you can shoot walls, floor panels or floating circular droids, who are drawn to wall panels of the same color, to activate switches to open doors to proceed to the next test room.  Some of these robots are stationary while others, once shot, will attempt to run you down and kill you, restarting that stage. You also can’t undo a shot so if you mess up a color shot you may have to restart that level as the solution may not be possible any longer.  Additional elements are added like shields that block your shots surrounding walls or electric panels adding to the challenge.   Smooth or click-turning is available though at the time of this review the smooth-turning option seems to have a large bleed effect, which could possibly trigger sim sickness, though those who aren’t affected will be able to move past it. There are over 60 stages to get through spread out over 8 different levels giving the game a ton of content . 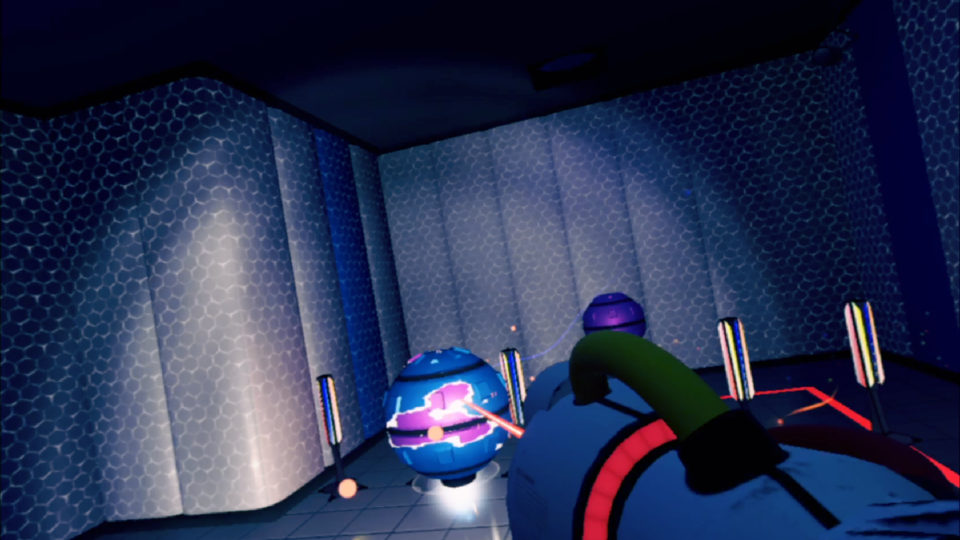 ChromaGun looks very clean.  Like other test lab type puzzles, the rooms you are in are stark and sterile.  White walls and floors surround you, though of course can be colored at your own discretion, with a few environmental elements thrown in to spice things up.  Switches with their pathways linked to a door pepper most levels and those nasty robots may also already have a color assigned to them.  Later stages change things up a bit by messing with the lighting bathing you in darkness, save for a flashlight and some very dangerous flames are also introduced to help keep the game from feeling samey.  The music is a little trippy giving a wonderful sense of being out of your element and a faceless voice talks you through the campaign offering tidbits of info but mostly chastising you for failing.  He’s actually pretty funny at times but some of his sarcastic one-liners do repeat after a short while which was a little disappointing.  Overall, it’s a simplistic and well polished title that looks and sounds great!

One element that I appreciated was the ‘color-blind’ mode option which can be toggled in the options menu.  As a guy who has some mild red-green color blindness, I appreciated this more then I thought I would.  In this game specifically, I had troubles discerning the orange and yellow hues and with the color-blind option on, every color now has a symbol overtop of it, denoting what it is.  For myself, all the colors were very easy to identify and separate besides the 2 I mentioned, but if you do have worse color blindness then myself, you can still play through the puzzles presented here.  I ended up using the Aim controller over the DS4 as the game seemed to have a really hard time keeping track of my DS4, even when it directly facing the camera.  It was constantly drifting on me and just disappearing off screen or freezing the game for a second as the camera found it again making the DS4 a frustrating option.   My only other issue is the repetitive nature of the game.  The campaign can be beaten in roughly 3 hours, or less if you are good at solving conundrums, but I found myself needing breaks every 45 minutes or so as the stages just felt the same after that while.  They aren’t, and the game does get increasingly harder, but as the entire game is based around 1 simple mechanic, I found longer plays just felt a bit too repetitive, ruining some of the fun. Don’t get me wrong it’s a solid puzzler, just one I would recommend playing in smaller doses. 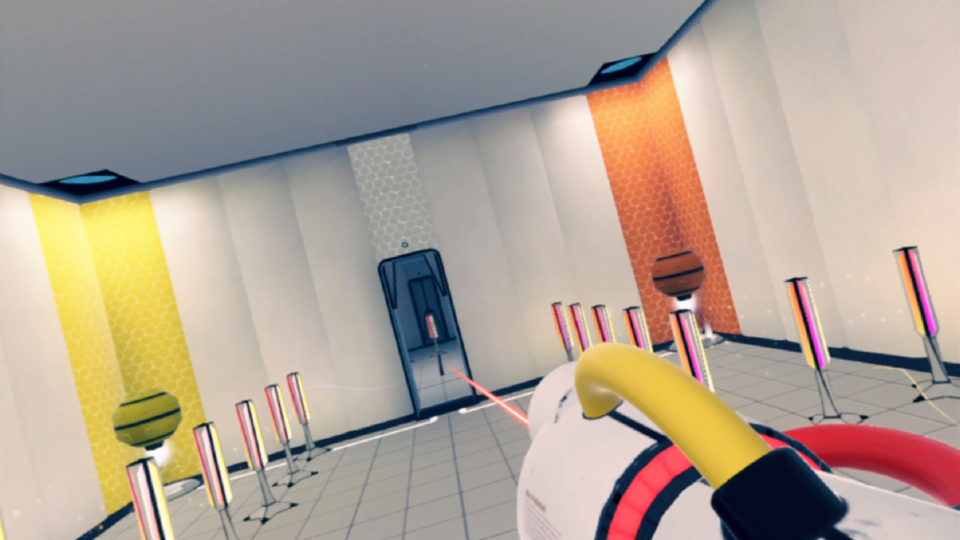 ChromaGun, when it’s all said and done, is great puzzler made better by VR.  The aim support here is rather superfluous save for the fact that the DS4 tracked very poorly for me..  The puzzles are challenging though never get to insanely hard and when in doubt, trial and error will probably get you through a few tough moments.  If like games like Esper or Portal then this fits in line with those, only with a new mechanic and is a welcome addition to the first-person puzzle genre!

What would I pay? The $20 price tag on this is perfect.  It’s not a lengthy game but has enough content to more then justify that price.  Add in the light humor and unique gameplay and overall Chromagun is a winner in every category that matters.

Pixel Maniacs provided a press code for this title and, regardless of this review, we thank them for that!