While 1st person titles are what many people think VR is made for, 3rd person titles can benefit from the medium offering greater immersion and new ways to take in the action.  Top-Down Racers have been a gaming staple since the mid 70’s with titles like Micro Machines, Off-Road and many more delivering on that now classic formula.  When it comes to VR, the genre has been largely ignored with only 1 other title coming to mind, Mini Moto Racing X, meaning there is plenty of room for competition and while BlazeRush was actually released for PCVR headsets 6 years ago to middling reviews, the Quest release offers new content and improvements from the original that should make it the more well received version. 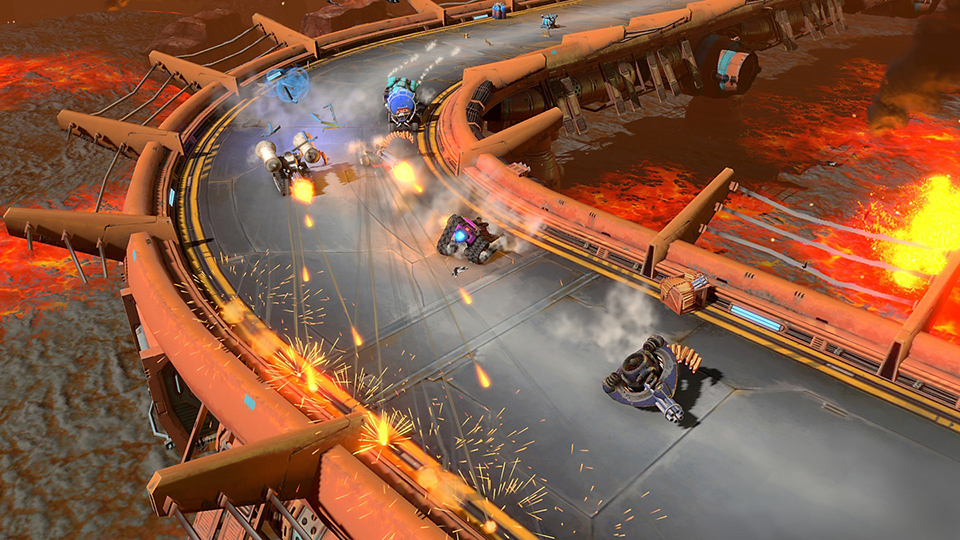 The races are intense, they just aren’t always fair.

Offering a single player campaign with 30 races or up to 8 player online action with multiple racing modes and course specific objectives, there’s a fair bit of game here but it’s not without issue.  As you are the camera, there are no comfort settings with your view locked to your vehicle at a set distance.  By design that fixed view allows you to look around meaning throughout each race, when you are steering your vehicle toward the camera, it can be difficult to see what’s ahead without taking your eyes off your racer, which is a big no, no.  Another odd choice was the button mapping as the default control scheme for this game type typically assigns the player a gas button and steering is handled by turning a thumbstick right or left.  In BlazeRush, the direction of either thumbstick and how far you push it determines your direction and speed which did take me a little time to get used to.  In most of the modes, you can also nab speed and weapon powerups, activated by the face buttons, with variations of each sprinkled throughout the campaign. Seeking missiles, buzz saws, chain-guns, lasers and many more make up a bulk of the weapons though the vehicles can’t actually be destroyed with the damage caused by the attacks messing with the victims direction and momentum possibly knocking them off the course and sending them to the back of the pack. Each course has medals assigned to it based upon performance and objectives with the races being tiered, so you need a certain number of medals before you unlock the next series of tracks.  Besides the standard races are Time Trial, Survival & King of the Hill with Survival awarding the player with the least deaths the victory with a giant boss trying to run down the racers and when 1 player is left, the race resets and all the players can try to outlast each other once more.  King of the Hill only gives points to the player in 1st so once a racer reaches a set limit, they win.  Unfortunately, at the time of this review I can’t comment on the multiplayer as I could never once find an online match no matter which time of day I tried and none of my Quest friends are nearby so I couldn’t try the local play either. 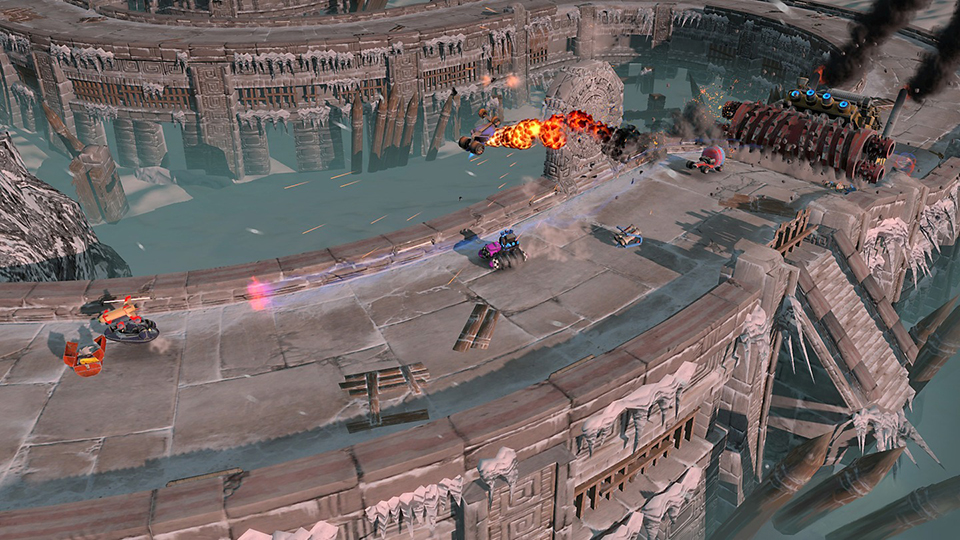 The tracks and vehicles are fairly impressive!

BlazeRush has been available outside of VR since 2014 and carries with it cartoonish, sci-fi inspired visuals you would expect from the genre.  There are host of characters and vehicles to choose from with differing stats for control, speed and acceleration as well as which type they are from light rides, heavier ones and ones that fly with each of those 3 types also changing how the vehicle handles.  The courses all look fine with the actual tracks carrying a fair bit of detail across various themes like forests, fungus, wastleands and many more though the backgrounds look much less inspired with the closer stuff looking rather flat and the further stuff looking like pixelated silhouettes. The physics at play also add some nice depth as how to you impact walls or  more importantly, how weapons affect the racers ensures that each race is chaotic with cars trying to pass each other while boosts and weapons are used rampantly.  Even the smaller effects look quite nice with explosions and smaller weapons all having the appropriate flare making for a title that doesn’t look great, but still gets the job done when it comes to how it looks in the headset.  As far as the audio presentation goes, everything sounds like it should with some generic but serviceable background music accompanying your races and while not one musical number is memorable, that’s fairly typical of the genre and nothing in here ever offended my ears. 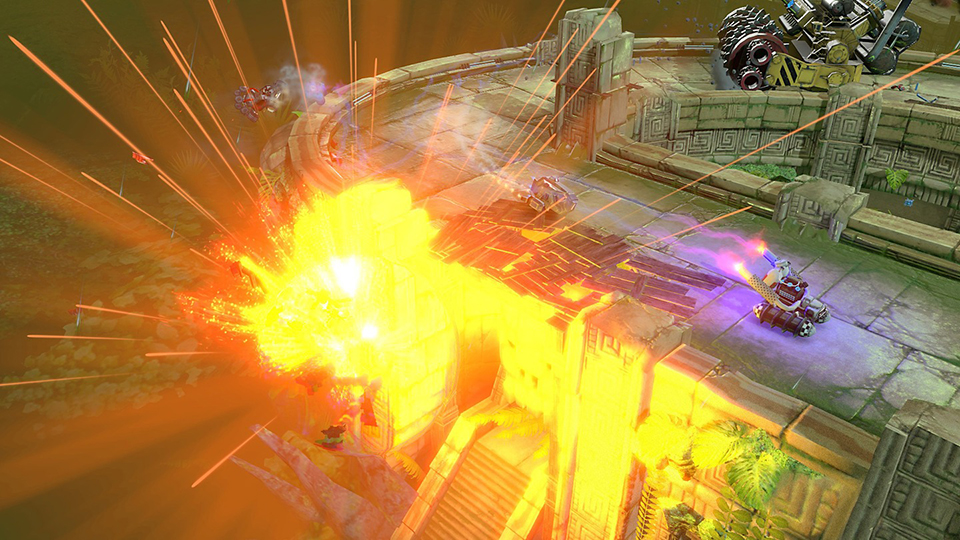 Blazerush is for the most part a stock top-down racer with an emphasis on combat over racing which can the make the races feel incredibly unfair at times.  As combat is at the forefront of the game, if a player falls too far behind, they will be teleported closer the pack and if by chance you get a commanding lead, don’t expect it to last as the trailing players will have access to more power ups and speed boosts keeping them always nearby.  The physics are for the most part just fine, but on more than a few occasions, I hit something “funny” causing an odd crash or even worse, a delayed death where my vehicle careened though the air getting caught up on the environment and I couldn’t do anything but wait until the game had decided I was out of commission long enough for a respawn.  That dynamic of weapon and boost spawns also means that each race can be quite chaotic with 1 race having me getting bullied by the AI while a replay had me crushing the competition and I don’t think my skills improved, I just think I was lucky.  My last issue would be that single viewing angle which does underutilize VR and makes the racing more challenging than it should be as it’s not very often that you have to fight the camera in VR, but in here, you will almost every race. 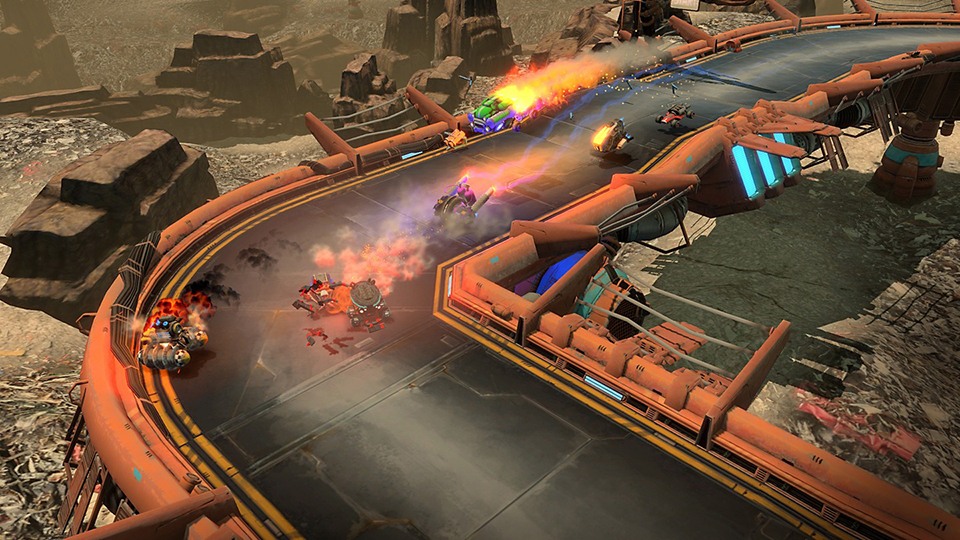 Depending on your direction, it can be hard to see what’s coming next.

As far as top-down racers go, BlazeRush: Star Track is acceptable, but outside of the focus on weapons over racing, really does little to make it truly stand out, especially when you compare it to Mini Moto Racing X, which offers up more tracks, vehicles, views, upgrades, and content overall.  It’s not bad, but it also starts to feel quite samey despite the new weapons and courses introduced and when you factor in the seemingly dead multiplayer element, it’s one of those games that’s fun to play for a bit, but I was bored long before I finished all the races.

What would I pay?  This is $14 US which is honestly fine for what’s here save for the fact that MMRX is the same price and offers way more content.  If you’re curious, I say go with Mini Moto first and if you haven’t had your fill, then pick this one up after.

Oculus/Meta provided The VR Grid with a press code for this title and, regardless of this review, we thank them for that!