Every now and then a title is released that proves once again that VR is the future of gaming, and Brass Tactics is another one of those games. Striking visual flair mixed with tried and true Real-Time Strategy gameplay makes Brass Tactics an immediate must buy for not only for RTS fans, but also for people who enjoy a good time. Developed by the people best known for their work on Age of Empires HD, Counter Strike: Global Offensive, and Witchblood, Brass Tactics is a game that makes you think quickly while trying to best your opponent on the battlefield. 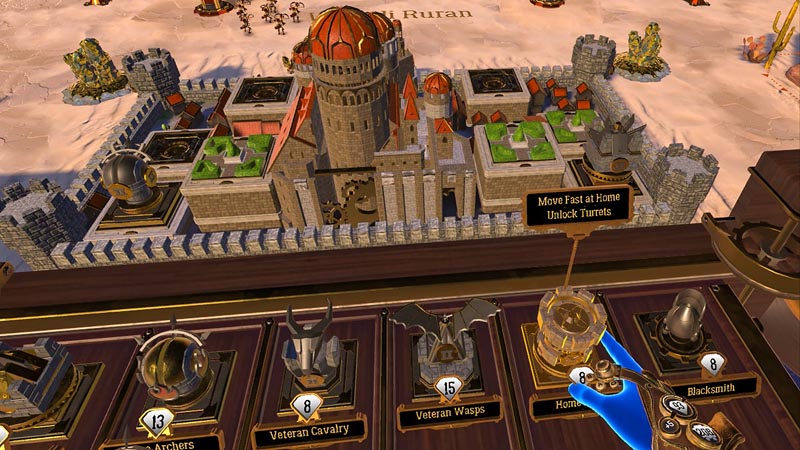 The gameplay in both the campaign and PvP in Brass Tactics is simple yet has many layers of complexity for those wishing to get more out of the experience. The goal of each match is simple, get to your opponent’s castle by building structures and creating an army. Manage your income of gold and diamonds to keep yourself robust and pick your battles wisely. Destroy your enemies base and claim victory.

Each game starts with a quick countdown, and then you’re off. The map has several different areas to capture, and which path you choose to go down decides what map advantages you want to go for, and what your strategy will be. At start, there are two “sockets” you can build towers on to grow your army. Each tower can produce different units. Of the 12 different unit types, there are warriors, archers, knights on horses, but there are also some more exotic units as well. Dragons, flying beings called wasps, 4 legged tanks, titans, and more all lend a great flavor to gameplay. When playing, I never felt as if I had to stick to one playstyle, and over several games it was loads of fun to experiment with the different classes to see what units worked best with the way I liked to play. 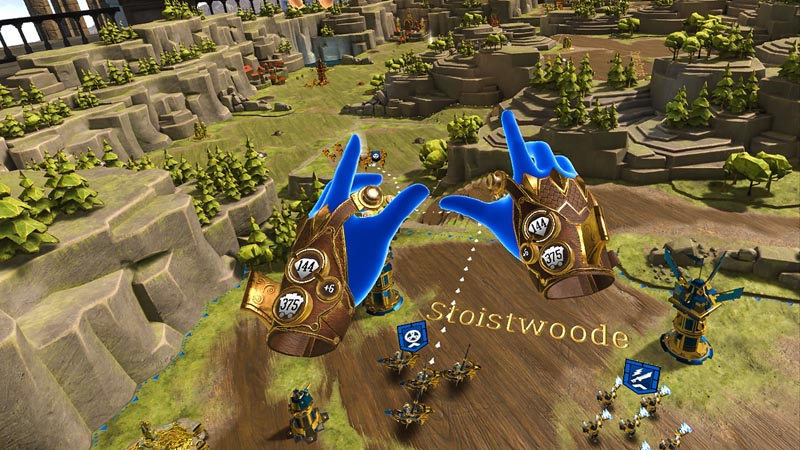 Direct your units across some very large maps

Some unit types have special abilities like shields, or the ability to lose mobility in exchange for added distance to attacks. Each unit type also has upgrades that give them different traits, so if invisible stealth warriors are your thing, you can do that! If you want to equip your archers with fire arrows, that can happen too. There are also upgrades to unit speed, which really adds to the pace to the game. Your upgrades last the whole match but are expensive, so you have to choose wisely. These upgrades are purchased with one of the currencies, diamonds.

The currency in game is gained by mining. Each area you capture has ore that is automatically mined which you use to buy more units (up to your unit cap). Diamonds, on the other hand, can be mined in some locations but also accrue naturally every 30 seconds or so. These diamonds are used to upgrade your base stats, give your units abilities, and to build structures, so they are extremely important to manage with care. 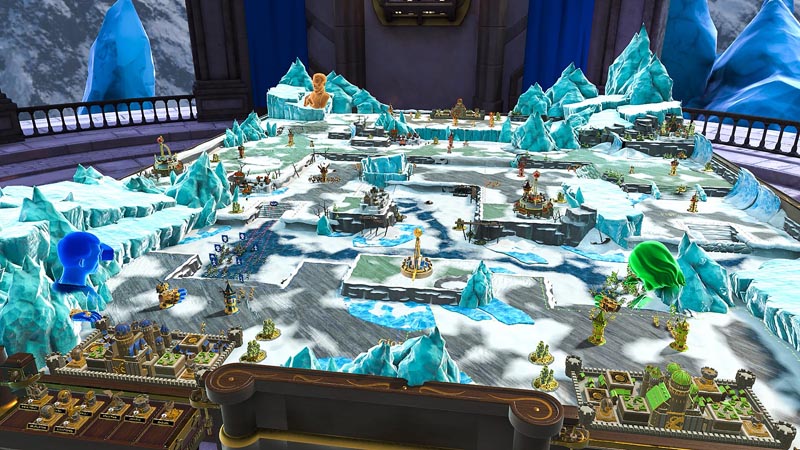 Enough of the nitty gritty details, is the game fun to play? YES! Having played through the campaign and played quite a few PvP matches, I have to say this game is a delight. As a person who likes RTS games some, but has not played one in a while, Brass Tactics feels like a game I will be coming back to for months, if not years. I started playing the campaign to grasp the basics, which I highly recommend, as the first 2 levels teach you the core basics of the game. After playing the campaign I started up a PvP game and got matched in seconds. In fact, I have yet to wait more than 30 seconds to find a match when I play (6pm-10pm EST). My first 2 PvP matches I absolutely crushed my opponents. Basking in my god-like powers, I was quickly shown my hubris when I started up match 3. I lost the game in about 12 minutes to someone who was clearly leagues ahead of me, but I learned a lot and still really felt like I had a fun time. The addition of voice chat in game was helpful too. At the end of the game there is a large chalkboard wall that shows how your economy progressed through the map, and when you upgraded things, all compared to your opponent. My foe stood with me and pointed out different places I had not done well and gave pointers to where I could do better. Usually in multiplayer games, I don’t talk much, but this didn’t feel confrontational, and I really liked seeing the community has already become a place of welcome rather than gloating. I went on to play more matches with mixed results in the win/loss category, but I was enjoying myself the whole time and never felt frustrated.

The campaign here feels very solid. It doesn’t take too long to complete, maybe 5 or 6 hours, but it is incredibly beneficial to learning the core mechanics of the game, and to hone your skills. The AI is very intelligent, and with several difficulty levels there is something here for everyone. The first level is strictly learning, but out of the bajillions of tutorials I’ve played in my life, this one was one of the better ones. You don’t feel like you’re having a tutorial shoved down your throat which is excellent, because that sucks. Once finished, you feel ready to take on PvP and Co-Op PvP.

Graphically the game is beautiful. Each of the units are modelled very well, and the color choices are vibrant. The palette you hold that has your buildings on it looks like it has a nice wood finish with some small highlights, and it’s clear a ton of thought went in to this game. This is NOT your brother’s unity asset flip, this is the real deal. The music in the game is epic, and it reminded me a lot of the Halo Mjolnir Mix track we all love. I was humming the music each time I finished playing, and I would honestly buy a soundtrack if they put one out. 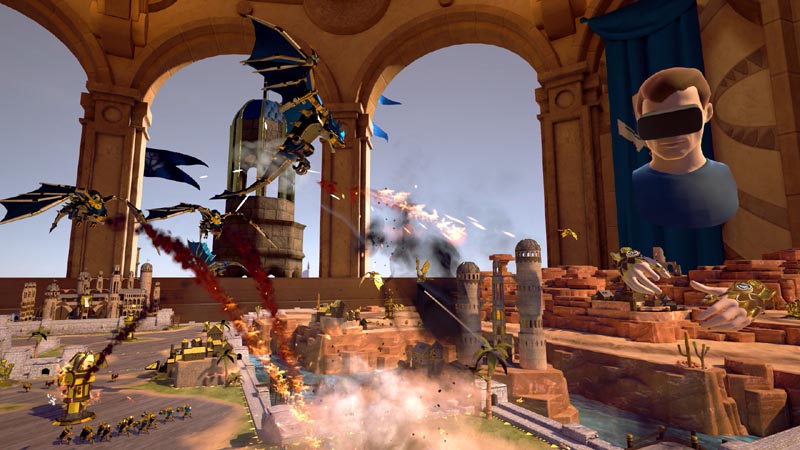 I can’t get enough of Brass Tactics. I’m only a beginner, even at 20 hours played (demo time included), but I can see myself putting another 50 hours in easily, and I’m already planning on how I can improve my game while I sit at work. The skill curve is just right, and I never found myself thinking something was missing. Oh right, Aidan Gillen from Game of Thrones is one of the “Bad Guys” in the campaign and does a tremendous job as well. Little things like that are peppered throughout Brass Tactics. The game was clearly made with care, and after writing this, I want nothing more than to dive back in to the world once again. If you haven’t ever played a RTS game, or if you are a lifelong lover of the RTS genre, Brass Tactics is for you.

What would I pay? I would happily pay the full price tag of $40 for this game, heck, I could see a traditional $60 price tag if VR wasn’t as new.  The sheer amount of content and polish, plus the replayability, makes it the most fun game I’ve played in or out of VR in a long time.

Hidden Path Entertainment provided The VR Grid with a review code for this title and, regardless of this review, we thank them for that.