Full locomotion campaign based military shooters are a surprising rarity in VR with many opting for multiplayer competitive action.  Zero Caliber has been around for some time on the PC side of things but has now gotten the stand-alone treatment thanks to a port to the quest that not only contains almost all the content from the PC version but finishes off the story including new combat mechanics and interactions.  Things aren’t going well for USA as large portions of the United States have been seized by a rogue organization and you must fight against them as a member of the newly formed Outer states of America army. 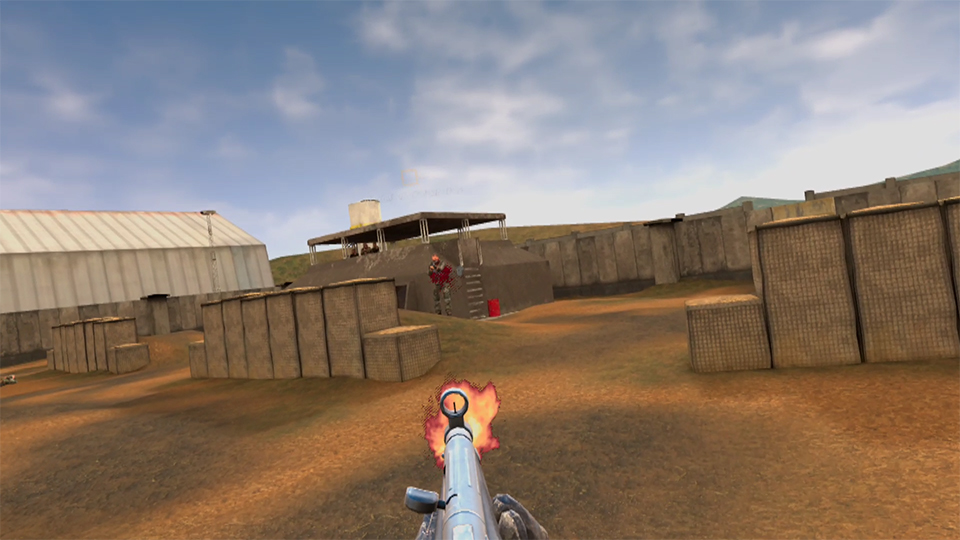 Sacrifices were made to get this on the Quest

Standard FPS controls are in effect as you navigate the various environments you find yourself in with standard comfort options for those that need them.  Where Reloaded separates itself from most other shooters is the level of interaction with yourself, your comrades and the world around you.  Weapons offer up semi-realistic mechanics and require you to expel a clip, replace that clip with a new one and than cock back the slide or whatever that gun needs to chamber the next round.  Ammo is infinite so whenever you need a reload, you can simply grab at your hip for your next clip with grenades appearing where your chest would be (you can’t see your body, just a belt) and 1 weapon slot on your chest and at your side so you can carry 2 firearms at any time.  Additionally, you can jump or duck with a flick of your right thumbstick in that direction, which I really liked, with climbing and other smaller interactions like pulling levers littering the campaign and, should your foes get to close, you can whack them with your weapon which is pretty damn satisfying.  As you progress, you’ll unlock new weapons, accessories and skins for your 3 loadouts which you will automatically start with the next time you jump into the game.  Supporting up to 4 players, you can play this solo or with others with the best way to experience this being the latter as it is just always better when you have someone to share the action with.  A shooting range is available, and you can revisit any stage once you have beaten it with a few difficulty options to choose from though enemies really only become more bullet spongey the harder they get though head shots are always a 1-hit kill. 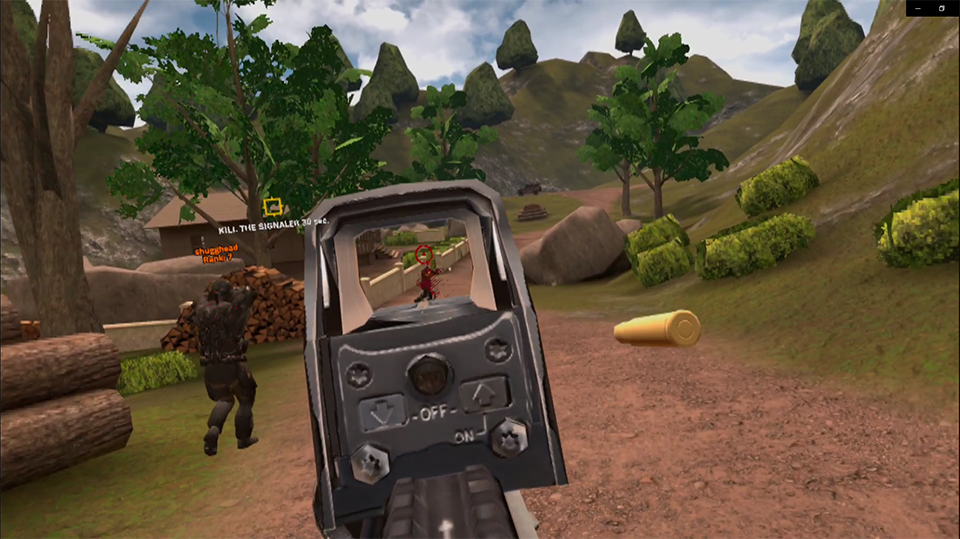 Co-op action is where it’s at!

In order to keep the gameplay mostly intact, A LOT of visual sacrifices were made to make this work on the quest and while it does work, it’s very rarely pretty.  Environments are rather stark and bare with texture quality lacking on just about everything but the weapons, which look fairly good.   One of the more impressive aspects of the game are the active scopes which in VR, are always a blast to use as you pick off soldiers from far away.   Many assets honestly look like PS1 era 3D models with vegetation being little more than multiple 2D images placed together to sort of look like bushes with trees looking like a mishmash of straight edge blobs that will turn into that old-school 3D foliage once you get close enough to trigger the texture pop-in.  Stages can be very open, which is definitely where the game’s visual struggles are most obvious, to closer quarters encounters in sewers and facilities where the game shines a bit more. Character models look a little better with enemy’s having a variety of looks from shirtless tattooed gang members to fully armoured soldiers and everything in between and the AI soldiers animate well enough though are prone to do somersault dives a little too often, which is actually hilarious.  Other issues pop up with blood sprays looking like little more than static and explosions looking less than impressive and don’t even think about lighting effects because they are absent.  There’s no way around the lacking visuals here as nothing in Reloaded looks remotely impressive SAVE for the fact that the stages remain intact and have a large variety of assets to add to authenticity of any given level, but just like everything else in the game, those assets do the job, but don’t look good doing it. 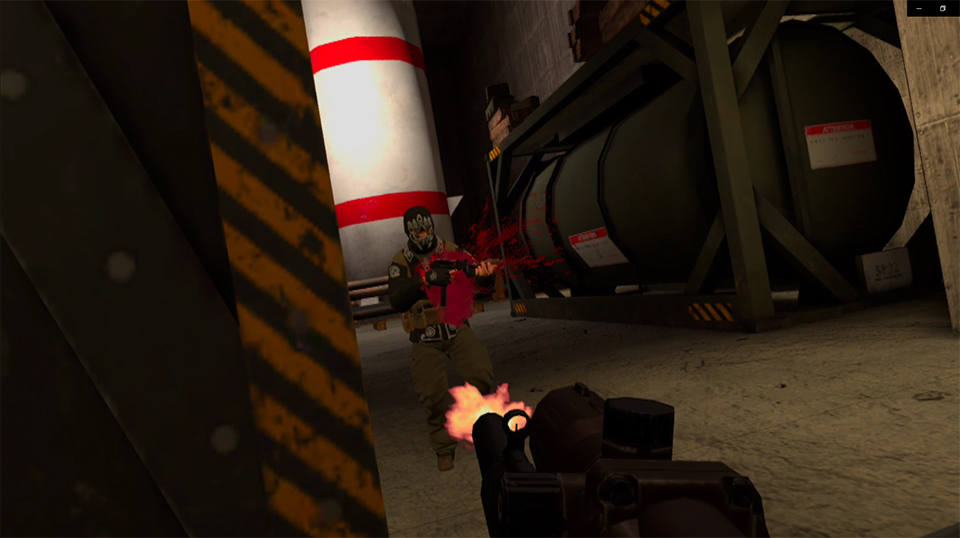 The indoor stages fair much better than the outdoor ones.

Sound design is much more on point with weapons sounding as they should and as there is a large variety of weapons in the game, that’s a good thing.  High octane music plays throughout, giving the game an almost cinematic quality as there is always some intense music playing to help amplify the encounters.  Missions will be given to you over radio with the voice acting being perfectly fine, considering it’s usually just a few sentences explaining the next encounter in B Movie fashion.  3D audio is solid with enemies often giving themselves away with statements about not letting you get any further or just plain kicking your ass and their death screams are some of the best I’ve ever heard.  With multiplayer supported, the in-game chat worked flawlessly in my play and automatically kicked in as soon I hooked up with my pals and amplified the fun factor nicely. 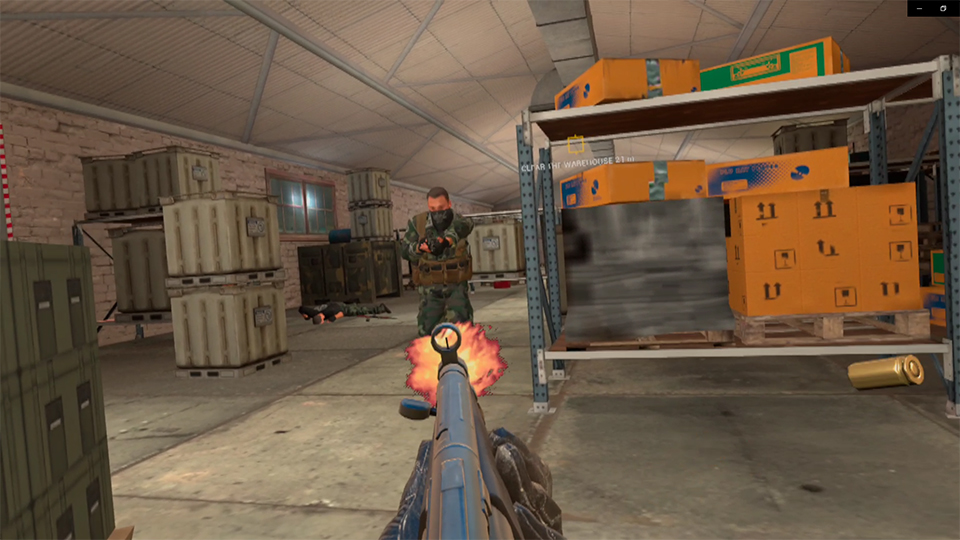 Textures can be rough at times

So outside of the lacking visuals, the gameplay remains largely intact from the PC version which is awesome as it’s a really fun game.  The original game is known for its impressive interactions between players and while some of that remains, it’s on the minimal side but still impressive for the Quest headsets as you can toss each other guns and do some light messing around.  It’s also awesome to climb up ladders to sniper positions, blow up barrels, man a mini gun, toss grenades and even use the environment to take out enemies by dropping items on them and it’s all made better by being able to do so with others.  That said, the enemies you face don’t exactly offer up the most intelligent competition as they may run at you for an easy kill or dive out of the way as you are shooting them or just stand there not doing anything and if they weren’t so deadly, they’d be laughable…actually, I still laughed at them quite a bit.  You can’t take to many hits so running and gunning is almost never your best option as no matter how far away the bad guys are from you, they can still tag you quite easily.   All my misgivings aside, I’m still impressed by the amount of game in here as it feels like a near fully fleshed out single player campaign.  The stages are designed to be a bit smaller with leaderboards offering up more points the faster you complete it, but with almost 25 stages to get through, there is a decent chunk of content in here.  It’s also a lot of fun to mess around with weapon attachments, ‘frankensteining’ some monstrosities together that just shouldn’t work at all but learning from those errors was also satisfying as I tailored the weapons to my wants and needs. 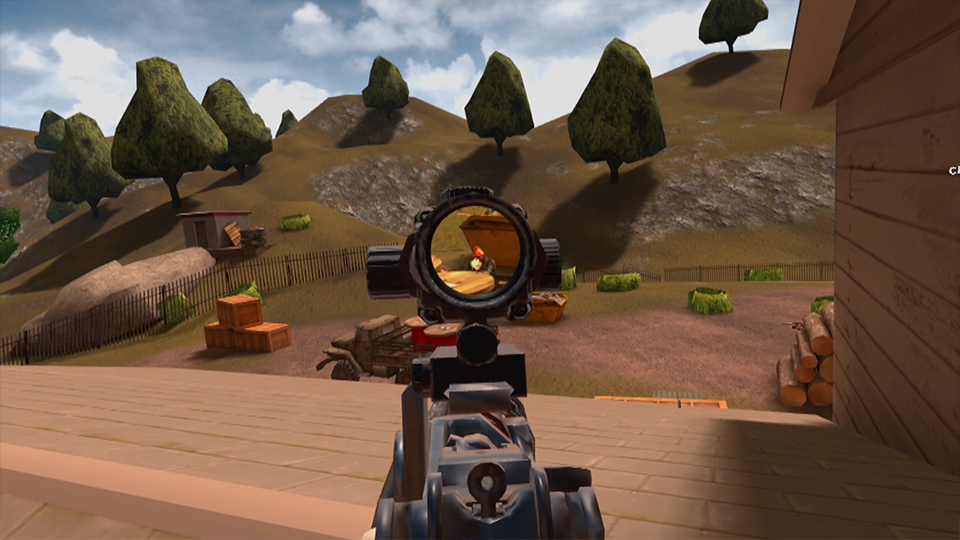 Sniping in VR is ALWAYS awesome!

Zero Caliber may not be a perfect port to the standalone headset, and while it’s not the prettiest game by any standard, it’s an undeniably fun one once you look past the presentation.  Hopefully the developers will continue to optimize the game a bit more for the Quest headsets but even if they don’t, as it stands today it’s still really entertaining.  Playing alone makes the game feel a little more tactical as you can be overwhelmed easily and playing online just allows for a little more chaotic fun thanks to your ability to revive each other, allowing for a little more risk and thus, insanity.  Military shooter fans should rejoice as Reloaded delivers a satisfying campaign, just not a very pretty one…but the lobby area looks rather good!

What would I pay? This is $25 and what sold me on that was the (up to) 4-player co-op.  Reloaded is a testament to what can be done on the Quest headsets but also highlights the sacrifices necessary to get these larger titles on standalone devices.  I’m curious to see what kind of updates will come to this as what’s here is mechanically impressive, but lacks the visual polish needed to make it a showcase Quest title.

XREAL Games provided The VR Grid with a press code for this title and, regardless of this review, we thank them for that!