Look out everyone…IT’S A GENRE MERGE!!!! What do you get when you mix 1 part FPS and 1 part RTS? An FPRTSS of course!  Ever since I played my 1st RTS oh so many years ago, I dreamt about taking command of a singular unit and becoming more than just a commander, but a lone hero on the battlefield.  Now we get that chance in Out of Ammo! 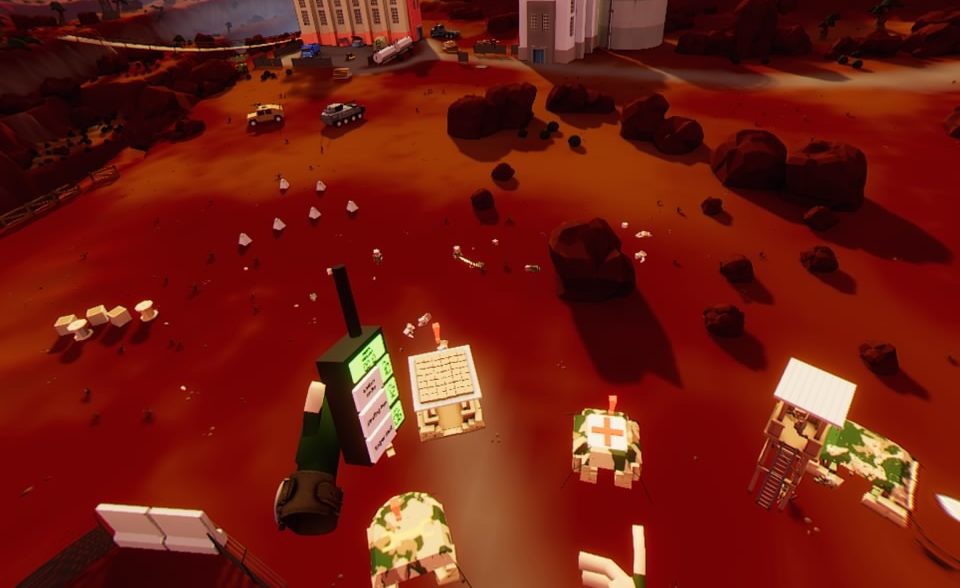 The controls here are both satisfying and frustrating. Requiring 2 move controllers, when you are allowed to move, in first-person mode, it’s teleportation and 90 degree click-turning only with ‘X’ on each controller turning you in that hands direction.  I have no choice but to keep lamenting these ‘comfort’ options as they pretty much do the exact opposite for myself, making games frustrating and uncomfortable to play. When in RTS mode, your view is stationary above a battle field whereupon you can direct and build units by highlighting and selecting options from a pop-up wheel.  Depending on your angle and view, sometimes selecting units and wheel options can be cumbersome, especially when those objects are right below you.

The gunplay is much more satisfying with an emphasis on realism that both hurts and helps the game.  All the weapons you handle need to be reloaded, which means you need to remove the old ammo, grab the next case, clip or bullet from your belt and place it back in the gun.  I appreciated this mechanic, but there are a few issues with the controls that I’ll cover later on.

Each level offers up it’s own unique elements, but ultimately plays the sameThere are only 2 modes available here, one is a never-ending RTS in 1 of 8 stages, where you must manage whatever drop-offs the game gives you and setup defenses to fend off never-ending waves of enemies. Setup a few buildings, assign a class to a troop and send them on their way.  It’s all very simplistic, but when it works it provides some entertainment.  At any time, you can possess any of your soldiers and turn this into FPS and help dispatch your foes with a little more efficiency than your AI soldiers.  Once again, when this works, it’s fun.  As the commander you are also given the option for targeted strafing runs, missile strikes and focused sniper attacks which should be used when the situation becomes a little more hectic. 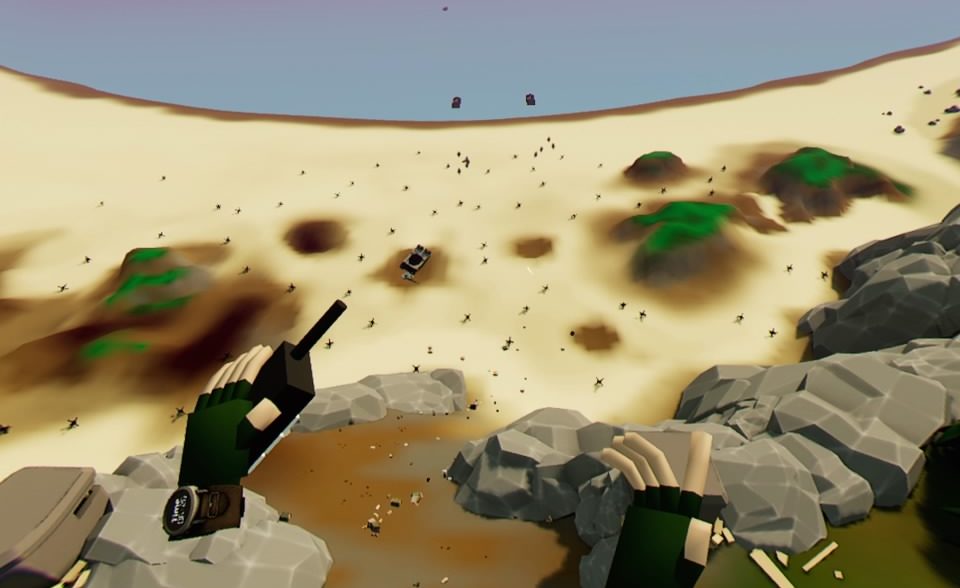 The other mode is first person only and places you in 1 of 3 situations where you need to ride out the clock and survive.  I thought I would like this mode a lot more than the regular RTS section, but a host of technical issues get in the way of this ever truly being fun.  The first stage is a botched spy mission that throws a bunch of enemies at you from all sides while you take them out with a single shot shotgun that needs to be reloaded EVERY TIME you shoot.  The second is a Sniper mission with you in a bell tower defending a nearby crash site from incoming enemies.  The last has you as the crash victim in a small area and, armed with a pistol, you must kill the encroaching enemies while scrounging for ammo.  Like the rest of the game, this mode is fun…when it works.

It’s a minecraftian look we are treated to and for the most part, I liked the visual style here.  In RTS view, the levels have a cartoonish design and I thought they looked good.  Lighting effects look good and though nothing carries any amount of crazy detail, I didn’t mind that here.  When soldiers and objects are at a distance they can look like pixelated messes with the only real way to tell enemies from the environment being the difference in colors between the 2.  The audio is  in stereoscopic surround sound so in FPS mode, your only clue to the next guy trying to take you may just be the sound of his gun firing behind you.  The same audio cues are present in the RTS mode as well, but matter much less as you have a much larger view of the play area. 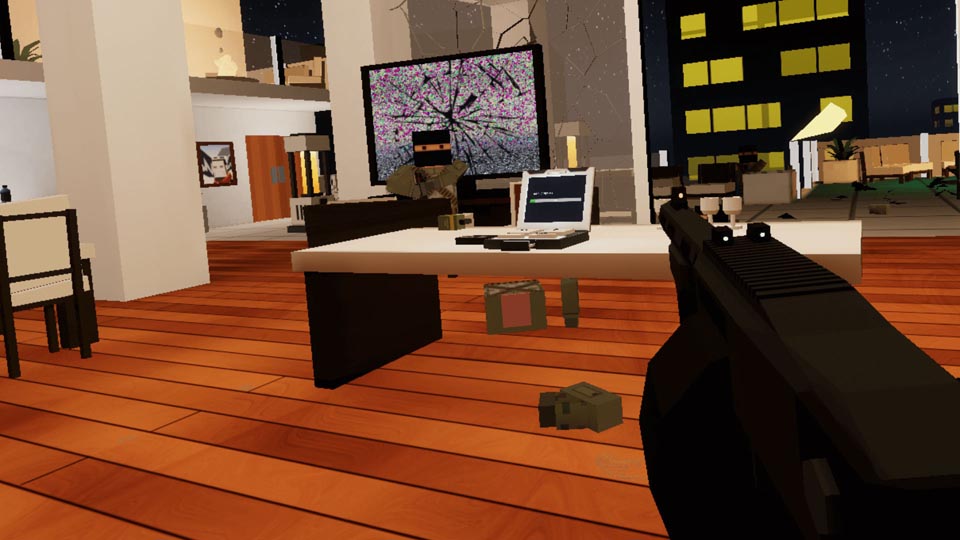 This level sucks and I hate it!

Alright, now for the issues.  In RTS mode, you are stationary, which is fine minus the fact that items can appear directly beneath  you and the action could take place there as well.  Trying to grab an item below you involves some awkward body positioning or turning 90 degrees in the game then physically turning back to the item you want to touch which is now a little easier thanks to the slightly different viewing angle.  The reloading mechanic here involves removing the old ammo and grabbing at your waist(ish) area for the new clip.  The sweet spot for the ammo to appear at your waist and in your hand is either very small or slightly randomized to drive the player insane.  Maybe half the time I managed to grab ammo on my first grab with most requiring 2 or 3 attempts before it appeared.  When things are chaotic, this is just unacceptable.

Sniping is still the most satisfying part of this game for me, but that’s not the praise it should be. The sniper rifle is 1 shot, so after you miss, you must pull the chamber lever back, remove the bullet out, reach down and (maybe) grab a bullet, place in the chamber and reset the chamber.  From here you can fire again…and probably miss.  You need to physically hold the scope up to your face and aim by ever so slightly adjusting your move controller to line up your foe in the gun’s sight.  Whether it’s some in-game mechanic, the less than perfect move controller tracking, or my own shaky hands, lining up a shot is a feat on its own.  Whenever I sniped someone, it was so satisfying and rewarding, but each time I missed I was forced to do the whole reload thing again, line up my shot and more than likely miss again and it honestly just wasn’t worth it.  Oh, the shotgun is also 1 shot, which is absolutely ridiculous on the FPS mission, especially when a headshot with shotgun close up may not even take an enemy out. 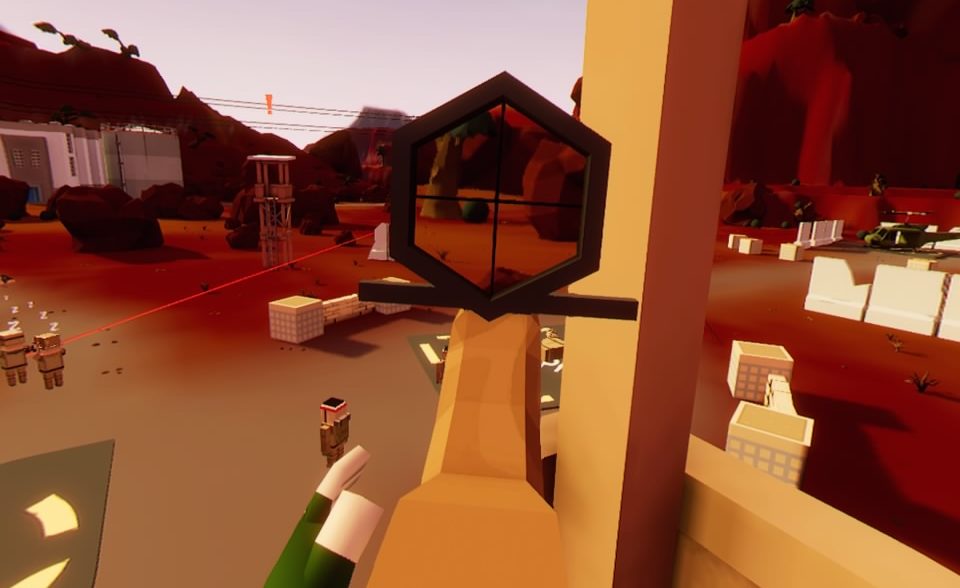 Whenever you actually snipe someone, it’s oh-so satisfying!

At the end of the day I think Out of Ammo works more than it doesn’t but when combined with the repetitive RTS sections, the 3 singular missions which are frustration more than fun, and overall basic gameplay, it’s easy to get sick of this and move on.  There is a 2 – 4 player co-op in the game, which is great, but doesn’t really alleviate any of the issues I mentioned, except you can see who gets tired of playing and quits first.  On paper Out of Ammo sounds like something I have been waiting years for and now that it’s out, I’m still waiting.

What would I pay?  Ha ha, this one is a bit tricky.  I truly had some fun moments here, but it just gets old fast.  $10 seems a little more apt here and with luck, future patches may alleviate issues I mentioned making for a more consistent and fun game.