This review has been updated on 10/27/2021 to reflect the PlayStation VR release and its controls.

I’m not to familiar with ‘The World of Darkness’ franchise other than knowing some kids in high school who dabbled in the macabre tabletop and the mid-90’s vampire television show ‘Kindred: The Embraced’ which I remember being a fan of, but not much else so for all intents and purposes, Wraith is thus, my first true foray into this dark world, and a dark world it is.  You play as Ed Miller, a photographer who has met his demise in the Barclay Mansion after documenting a seance but has arisen as said wraith and must piece together the mystery of his demise while avoiding the hellish ghouls who lurk the grounds. 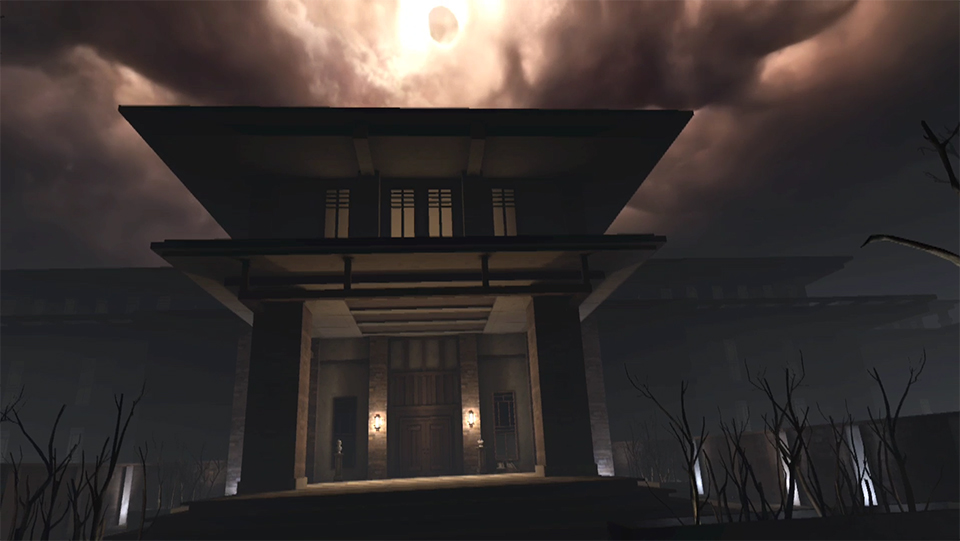 Welcome (back) to the Barclay Mansion.

Wraith plays like a suspense filled walk-a-thon with stealth elements playing a key role in your survival.  Standard FPS controls are in effect here with a plethora of comfort options available to ensure even those with the queasiest of stomachs can enjoy this suspense/horror title. PSVR users are of course relegated to button presses to move around and while it’s definitely a little more cumbersome than it’s PC counterparts, it plays perfectly fine.  As a Wraith, you have a few abilities thanks to shedding your mortal coil including a second sight of sorts which aids in finding your next objective, a dark shadow of your subconscious who gives you advice when needed though might not be all he seems, as well as a few item pickups which help you survive and flesh out the story.  Those items are found fairly early on and include a camera, flash bulb & tape recorder.  The camera is used to unlock memories indicated by floating pictures at specific spots in the mansion.  The flash is used to scare away some obstacles in your path & the recorder is needed to solve some puzzles and reveal more back story. Later in the story you gain a few more “ghostly abilities” that mix up the gameplay a bit but for the most part this is about slow and steady survival.  You aren’t the only ghoul in the house grounds, and you’ll have to avoid the wrath of the others by being very, VERY stealthy.  the smallest sound can reveal your position, so you need to crouch whenever possible as once these spirits see you, death is only seconds away.  Crouching minimizes the sounds of your movements and you can toss nearby objects that will distract those ghouls while you try and get around them.  A manual save system is setup at specific points around the house and require to physically grab at floating orbs to save.  As you unlock more memories and find items, new areas become accessible so while you will be retreading the same rooms over and over, you’ll also find other sections never visited that keep the game feeling fresh. 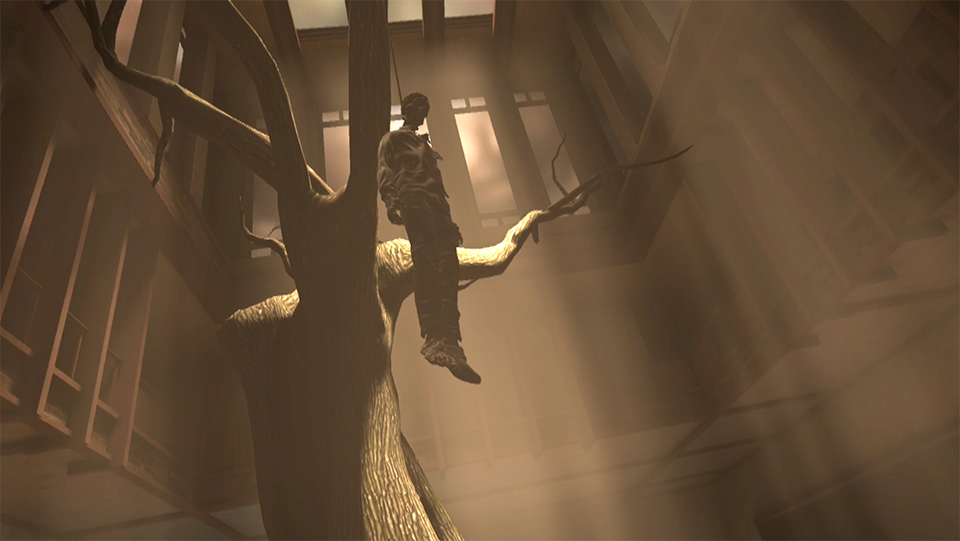 Whether you play on the PC,  Quest or PlayStation VR, the visual experience is largely identical save for some slightly dumbed textures on the Quest as well as less junk scattered around the mansion making for a game that looks very impressive on the quest, but a little lacklustre on the PC side of things.  The PSVR version looks to be similar to the PC version, offering a visual experience that looks the same aside from the lower resolution of that HMD.  In no way does it look like a bad game on the PC/PS side, but given the extra horsepower, I was hoping to see a bigger boost in fidelity beyond a better-looking night sky and barely noticeable texture improvements and with no graphics options to choose from, you’re left with playing it as the devs designed and that design is still fairly damn haunting.  Of course, the Barclay Mansion is massive and while wandering I couldn’t help but get some old-school Resident Evil vibes as the mansion is spooky and the tension level never lets you truly relax.  Strange growths block some of your path and will require you to shine light on them forcing them to recede and you’ll encounter a few jump scare moments when something may flash in front of you, or you’ll see something scurry away deep in shadow.  The house and grounds are the star of the show, but the ghouls that try to kill you are a close runner up.   Each one is unique, both in appearance and behavior, and come in some pretty bizarre forms from a jittery moaning woman, giant man with a serious head wound, spider creature which is nothing short of unnerving, and a few others which keep you on your toes.  When you snap pictures of memories, you may be treated to some live scenes from the past that involve other characters who died at the seance, each time revealing some clue about the past.  I was a little underwhelmed by these as the characters animate in slow-motion without moving lips and does come off as a bit “cheap” and I’m not sure if this was done as a design choice or because of the power constraints of the Quest headsets.  It’s a little nit-picky, I agree, but those scenes still get the job done and are typically brief as they only give the barest of info that you need to piece together with the overall package here delivering a very polished and clean experience no matter which headset you play on. 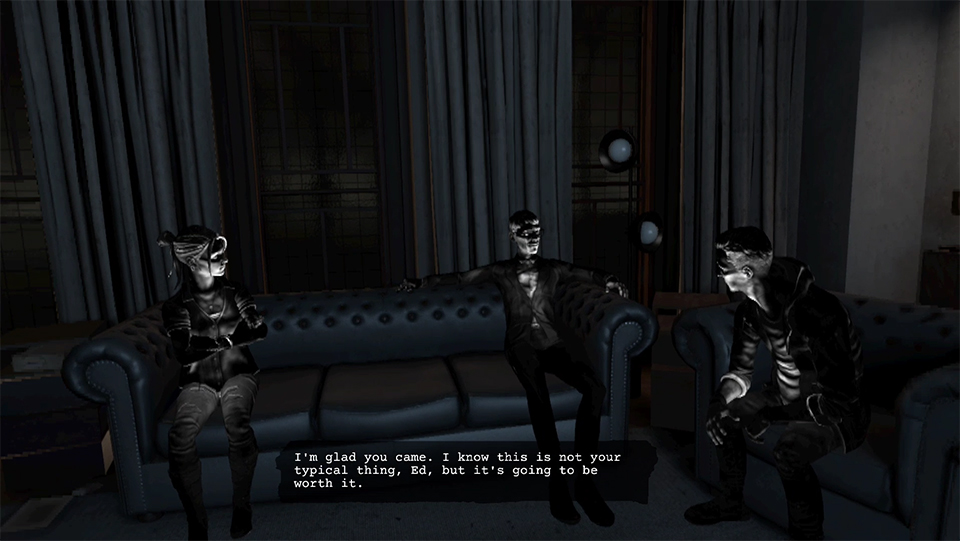 Glimpses of the past reveal your untimely fate

Whatever shortcomings the visual might have, there are none when it comes to the audio side of things as this offers up some of the most intense and immersive sound design, I have ever experienced in a headset.  Eddie has his own villainous spirit that talks to him sometimes in physical form, but other times just in your head with sound bouncing all around you as if it were all around and I was constantly looking around to see where he was talking at me from before realizing it’s just in my head.  Other ambient effects are at play with the house making the usual creaky floorboard noises and whistling windows but it’s when you need to be stealthy that every sound suddenly sound booming.  Opening and closing doors and hearing those handles click or even just moving to fast, causing an audible step could spell your doom.  You are limited to your sight and possibly your second sight ability, so if you lose sight of the ghoul searching for you, the sounds they make whether taunts, moans, footsteps or whatever may be the only sign they are close.  Unless story is progressing, the soundtrack is kept to a minimum, typically only playing during cut-scenes or when something extra intense is happening leaving you often bathed in near silence save for your footsteps which only adds to the tension. 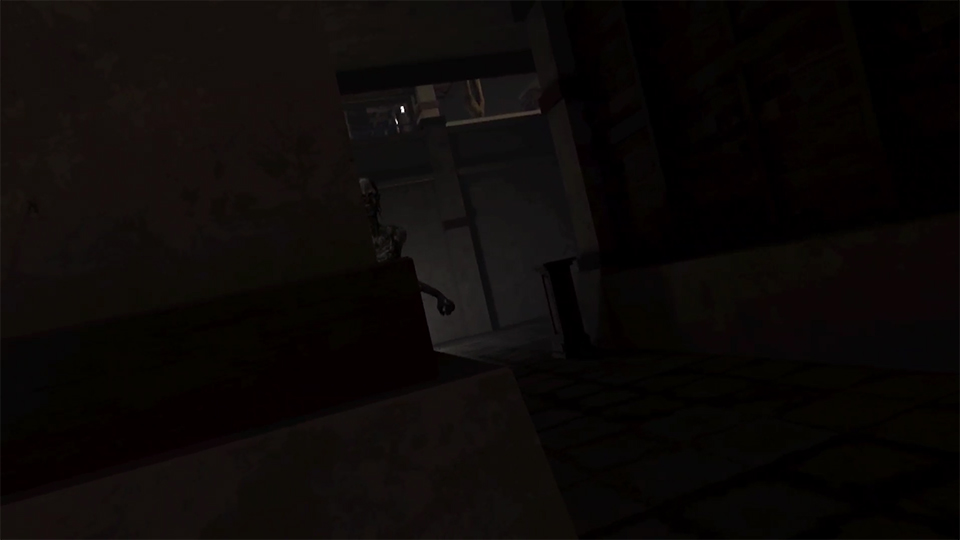 Don’t let the ghouls get too close!

I enjoyed Wraith for what it is, but what it is just won’t be for everyone.  For those that have played games like Here They Lie or Paranormal Activity, this falls in line near perfectly with those titles offering what is largely a lot of walking around with some occasional scares and the overall vibe that things are only going to get worse for you.  Due to this, the game can feel plodding at times as you visit and revisit areas over and over while meandering through the story.  That didn’t bother me, but when you combine that repetition with the save and encounter system, things get a bit frustrating.  Save points are only at select locations in the mansion and while some are spaced fairly, others may be a long way from your next ghoul encounter which can take a ton of time to try and get through but if you die, you could be forced back quite far having to retrace your path to get to the point to trigger the ghoul and subsequently try and escape it.  This is where the second issue arises as the ghouls can be unrelenting in their pursuit, randomly changing directions and not giving you a chance to move for fear of death.  Distractions (like tossing an item) work MOST of the time, but on more than a few occasions, ghouls wouldn’t react to a tossed item or worse, start to check it out than 180 for no reason (that I’m aware of) causing me to get seen, caught and killed and than forced to repeat the process all over again.  Patience is key in getting through these sections, but sometimes dumb luck was also my friend and just often, my enemy.  Trial and error had me persevere through these stealthy sections, but at times it was through gritted teeth and frustration.  Beyond that though is a game design that works quite well, slowly unravelling the horrid tale surrounding the seance and when not fighting those stealth elements, is a surprisingly unnerving game that almost never lets you relax. 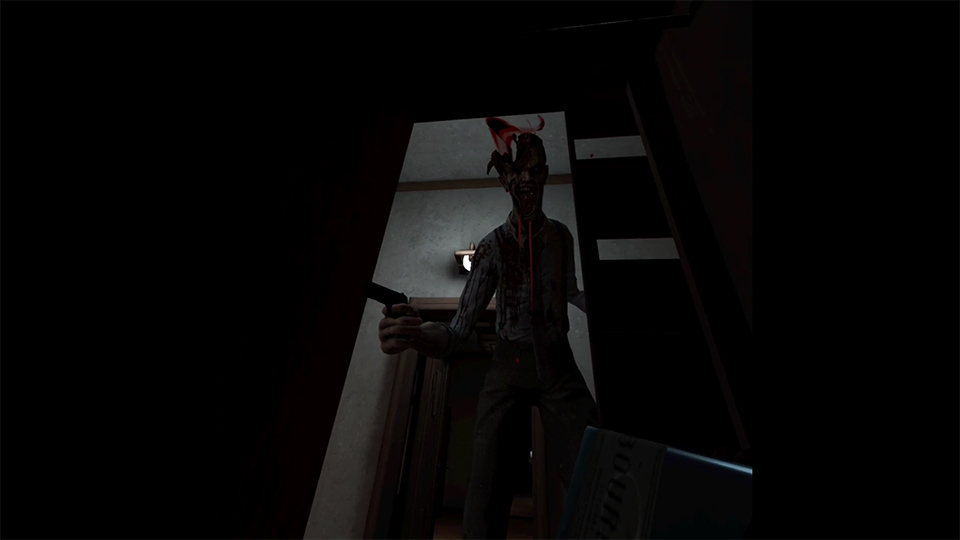 Horror junkies should eat this up as it provides the right amount of fear and anxiety to make the few scarier moments hammer home a little harder.  The campaign should take in the neighbourhood of 6 hours to get through and overall gets plenty more right than wrong.  For those looking to get their stealth on, when it works like it should, those sections offer up some of the most intense moments you can experience in VR and the sprinkling of horror and anxiety is the icing on that cake…assuming you dig that sort of thing.

What would I pay?  While I do have a few issues with Wraith, the complete package is a solid one and well worth the asking price.  Horror junkies will dig this and after playing, I’m definitely more interest in ‘The World of Darkness’ and hope to see more of this franchise in VR!

Fast Travel Games provided The VR Grid with a press code for this title and, regardless of the review, we thank them for that!