Werewolves Within is as much a game as it is a social experiment and takes Role Playing back to its roots.  I have never played a game like this before and while the game itself is very simple, the added aspect of being 100% social along with its subtler nuances makes this a unique experience in VR. 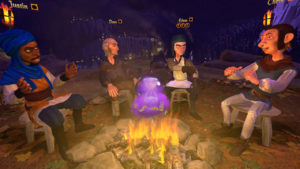 I was initially taken aback by the visuals, they just didn’t look that good to me.  Cartoonish games tend to look “better” in VR due to the simplistic nature of the character models, and while that is still the same here I thought they were just lacking.  That ended being completely irrelevant to the game.  While the models are simple, how they have mapped your actual voice and movements is impressive.  The mouth movements, though simple are really accurate to what’s coming out of your mouth as well as other animations, both assigned to buttons and apparently random.  The amount of animations, combined with motion tracking make these visuals really fun to watch.

The name of the game itself is communication and deception.  5 to 8 people(including yourself) sit in a circle around a table or pit or whatever(it’s just to mix up the visuals) and try and figure out who is a werewolf.  Utilizing quick match had games with 2-3 werewolves each and while they know who are the werewolves, no one else does.  Everybody else is a randomly assigned a role, each with their own unique abilities.  Some of those roles allow you to tell everybody who you are, while others require secrecy lest you be exposed and ruin your chance at winning. The bottom line is the werewolves don’t want to be exposed, while trying to steer attention to other people and verybody else needs to discern who the werewolves are before the allotted time runs out.

Sitting around the circle means that anything you say can be heard by everybody.  You have the ability to whisper to your neighbors so only you 2 can hear each other.  Other abilities, depending on your role, allow you to identify other people’s roles through various actions.  Whispering not only allows for private conversation between you and your neighbor but, depending upon your class, could give you valuable information about the individuals.  Other abilities include praying if you are a priest, which involves looking down for a long period of time, which may give you away to the wolves, who win for voting you out.  Most of the abilities are no more than clues, but combine your knowledge with others and you can soon decide who lying and who is more than they appear.

Though simple in practice, gameplay relies heavily on you being able to deceive or weed out the deceiver(s).  It’s absolutely great fun to watch and manipulate people into believing you are not the werewolf.  Trying to decipher who the wolves are is equally just as exciting.  As the clock runs down you listen to other conversations, trudge through truths and lies and all that ends in a final vote to determine who was right and who was wrong.  Each successive game mixes up the roles so you never play the same game twice.  It really is an absolute blast with matches running around 15 min each or so. 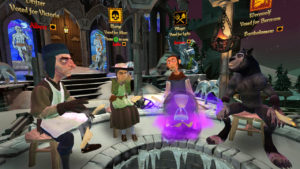 The endgame reveal is always fun!

Because this is online only and cross platform with PC I have encountered a few errors and annoyances.  My game occasionally wouldn’t load and just display the same loading image over and over or just crash all together.  While mics on the PSVR headset are great, PC ones are a mixed bag and you may be in a game with someone who has a janky mic.  Except for the game crashes, which seemed to have subsided for the time being, none of these are game breaking in anyway ard don’t occur often enough to negatively affect the fun you will have.

Werewolves Within really came out of nowhere for me. I have been pleasantly surprised and this is a must play for anyone in VR.  It’s a great way to make friends, socialize and play a game all at the same time.  The only thing holding this title back is you and your willingness to interact with others.  It is a social game and if you aren’t in to chatting it up with fellow gamers than that’s probably the only reason to stay away.  This is an absolute treat and totally different from anything you have played in VR before.

What would I pay?  $30US is perfect pricing.  The games subtleties and sharing this experience with others are absolute treats. It will take you a long time to master, yet it’s never boring.  When the final reveal occurs, everybody cheers, groans and laments over their choices.  Pick this up!