It’s funny, I was going to start this review off by stating that VR is lacking in those larger AAA(esque) titles thanks in large part to the focus on Quest titles, but that’s not true as in the last year we had some amazing offerings like Sniper Elite, Lone Echo 2, Winds & Leaves and many more.  With that said, we haven’t seen to many games in recent years that reach the presentation levels of Lone Echo or HL: Alyx so it’s a little special when a game aims for those lofty heights and now we have Wanderer, a time traveling puzzler packed with interesting gameplay mechanics and a crazy narrative. 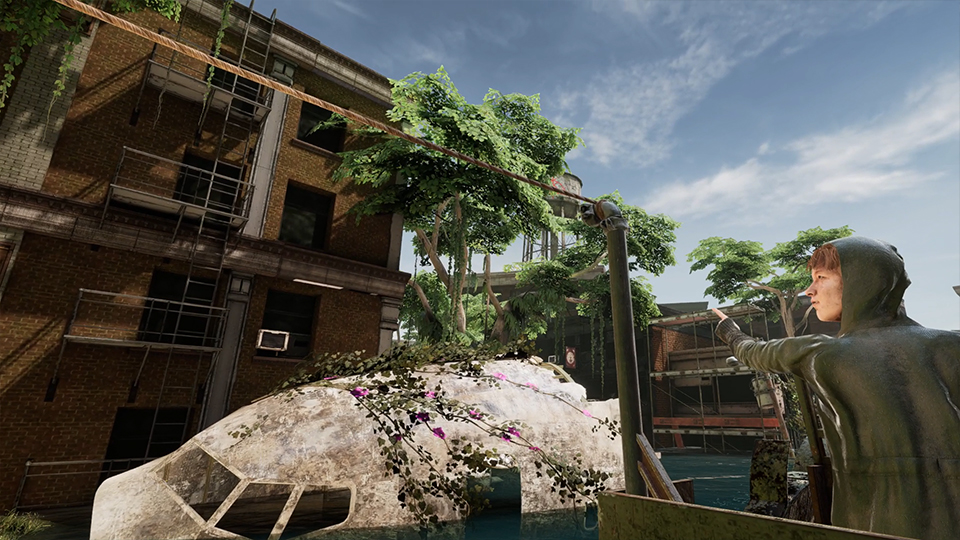 The future isn’t looking so hot so it’s up to you to change the past!

First person puzzling is the name of the game here with you playing as Asher, a young man who stumbles a across a video left by his grandfather that explains that your current reality is in fact, wrong, and thanks to some crazy tech left behind by your recently deceased ancestor, specifically an intelligent watch named Samuel, you can help unravel the events surrounding the worlds current plight.  With Samuel you can store items found throughout the game by simply placing them on his face, whereupon he will shrink it down to an easily portable size which can be summoned by tapping on his face.  Not only is he an amazing backpack, but he can also speak, helping guide you should be stuck and in a few situations, physically aid you as well.  Comfort options are available, allowing for smooth locomotion or click-turning and teleportation, with blinders which is awesome though the game doesn’t have a height adjustment option and wants you to play standing, which is fine except that I felt too tall even after calibration and restarting the game, with sitting having me too short, meaning that for the entirety of my play, I was never immersed the way I should have been.  Regardless, you’ll have to pay attention to your surroundings, and Samuel, as anything around you could be needed for a puzzle at some point in time during the 8-hour(ish) campaign.  Not only will you have to use tools, equipment and items, but you’ll find special items that, when placed into your watch, will transport you to a different location in time.  You see, someone is messing with the timeline and it’s up too you to set things right.  What’s great is that the puzzles in here almost never repeat making for a campaign that kept me on my toes but unlike other VR puzzle games the “The Room: A Dark Matter or “Xing: The Land Beyond”  the puzzles in here are almost secondary to the narrative and while that’s the not actually the case, they fit so well with the story that I often forgot I was solving puzzles so much as just finding solutions to the problems around me.  As you unlock new time settings, new items become available and items that previously had no use become needed, making for a gameplay mechanic that requires you to pay attention. 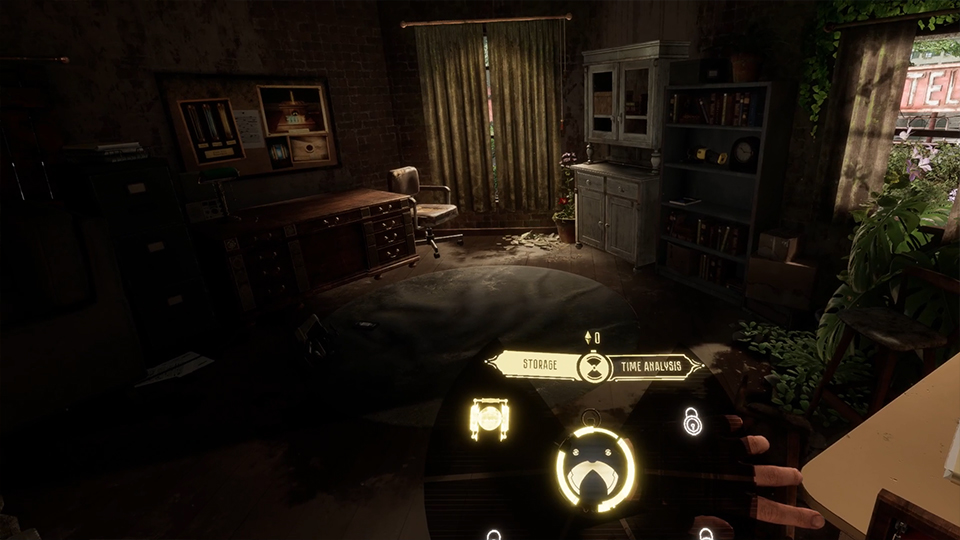 Initially, you can only store one item in your watch, which is nothing short of lame though time shards hidden throughout the game allow you to upgrade your storage capacity and while this progression system is nice in theory, in practice in can be extremely tedious.  Quite often, you’ll have to hop back and forth through time zones to grab items you couldn’t carry on your previous return to your apartment hub and even when you max out the watch with 5 storage slots, it’s sometimes still not enough.  The easiest solution is to turn your apartment into a storage space for all the “stuff” that seems important, but the apartment isn’t exactly spacious and soon enough I had clutter everywhere and was digging though piles of stuff, trying to remember where I left that drill or bow though it’s a way better system than leaving items in their respective time zones as, in my case, I only had to search my apartment for that needed “thing” and not hop through time wondering where I saw it last.  Additionally, you can cosmetically change the look of your watch by collecting “random” items in the environment and placing them in a resonation machine, adding a nice little ongoing sidequest to further extend the game. 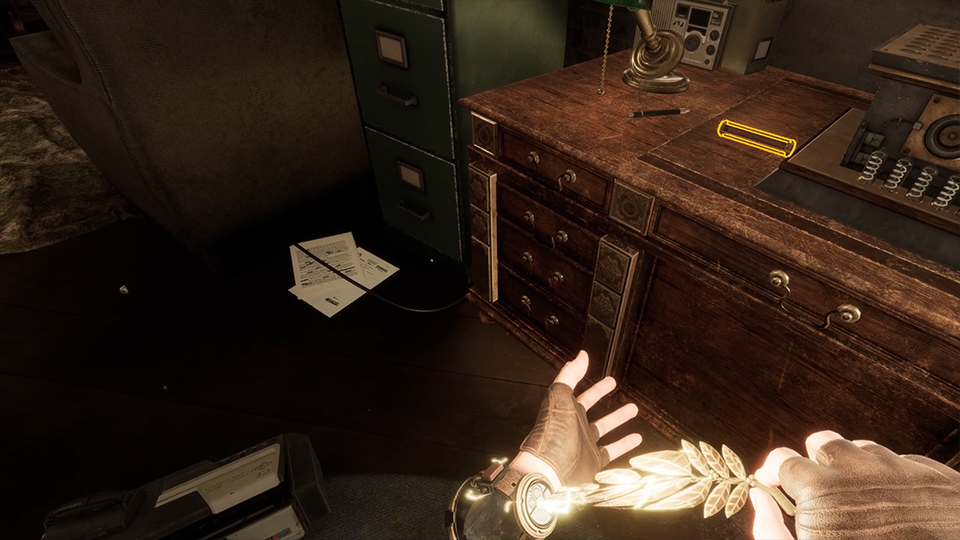 Wanderer is an undeniably beautiful game with the opening moments of the story having you navigating the flooded streets of Boston via a very ramshackle boat.  The attention to detail is extremely high with ruined buildings covered it overgrowth and once off the water, your apartment building and the various time settings you visit are rife with tons of items, many of which you can interact with and while there is a decent physics engine at play, it’s not Boneworks level, though is nonetheless impressive when you consider the scale of the game.  You’ll visit a variety of environments ranging from an ancient Mayan temple, alternate moon landing, (not-quite) Woodstock, World War 2 and few more settings with some time bending twists that make them all a treat to visit.  As this is a sci-fit tale, you’ll find yourself in some crazy situations and I’d be remiss if I didn’t mention the time travel mechanic, which looks like a Hollywood effect as your watch sucks in the special items that allow you to traverse reality.   I never got sick of watching it suck in Mayan statues, a bullet, pin wheel and host more random items that help show off where they will take you and to travel back to your apartment, simply press a button on the bottom of the watch and pull that item out it.  As great as it can look, it’s not perfect with most of the lighting being static, making things look a little unnatural at times though by no means is that ever game breaking. What is more miss than hit is the character models which can look alright at best and come off as just weird looking at worst.  Some of this can be attributed to lack of dynamic lighting though most is just by design and while all are not created equal, when they look off, they do take away from the game.  I feel obligated to mention these shortcomings, though in no way is this bad looking game and is arguably one of the best-looking games we have seen in recent memory and considering this was made by a relatively small team, it deserves to be mentioned with those other “best looking VR titles.

Whatever minor shortcomings may be in the visual department, there are none on the audio side things with some fantastic 3D audio accentuating every aspect of the story.  Samuel talks to you with a southern drawl, and I couldn’t help but think he should be played by Matthew Mcconaughey if they ever adapted this to the big or small screen.  The soundtrack is nothing short of epic with music popping in when it’s needed to amplify the mood of a particular scene.  As you navigate through time, you’ll be treated to a host of sound bytes and conversations with people from that era with the acting being, for the most part, on point and as the story in here is a lengthy one, there is plenty of dialogue to chew through. 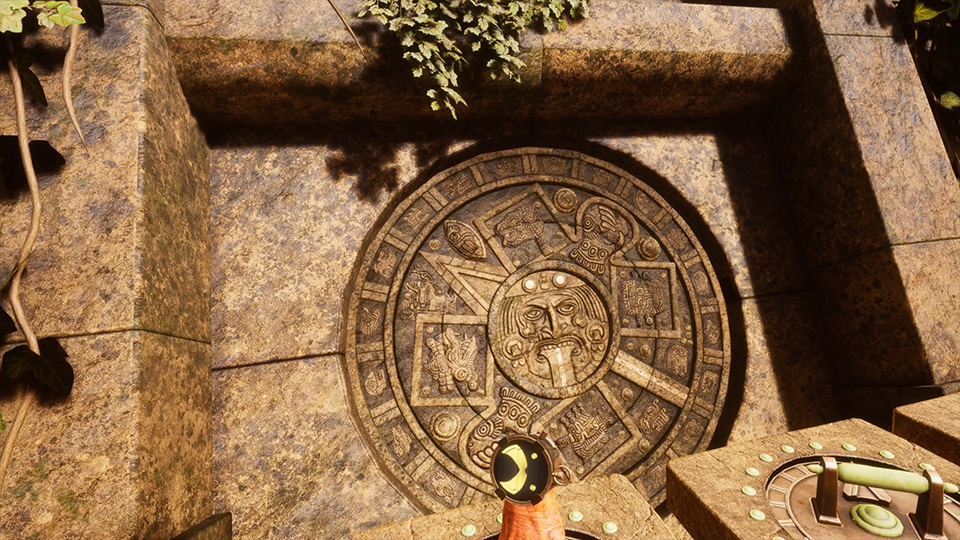 The variety of the puzzles in Wanderer is impressive!

Wanderer is a game much more in line with we have come to expect from the flat side of gaming offering up near AAA quality and I need to emphasize the word near as while it is a marvel, its missteps are made more noticeable when held to higher regard.  Those presentation issues I mentioned stand out because the game looks so great but when you see something that looks off, it just stands out more because it doesn’t match the world around it.  That same presentation is not without issue as the game seemed to stutter in larger areas and while using the smooth turn option regardless of the quality of visuals I had this set to. Items would occasionally disappear, move or get stuck in geometry forcing me to quit and restart so the game might reset the items and that did work most of the time, one of the bonus items never respawned, preventing me from unlocking that watch skin.  Samuel may also not be in sync with the current puzzle you are on and might offer advice for solutions already solved or guide you to a time you don’t need to go to. Sometimes that would fix itself, but when it doesn’t and the next step is unclear, the only choice was to reset the game or try and figure it out on my own which was annoying when I needed him. The puzzle design should also be praised but a few of the brain teaser ones did hold me up and, in those situations, I was left too my own wits, causing some hold up in my play as I struggled to decipher a solution without really understanding what the puzzle was asking for in the first pace.  It sounds a little silly to complain about challenging puzzles in a puzzle game, but those few conundrums that did stop me in my tracks did hamper the fun factor a bit.  With all those minor whining’s out of the way, I really can’t stress how much of a breath of fresh air Wanderer is and considering that it’s not from a larger studio, it’s one of the most impressive VR titles I have ever played. 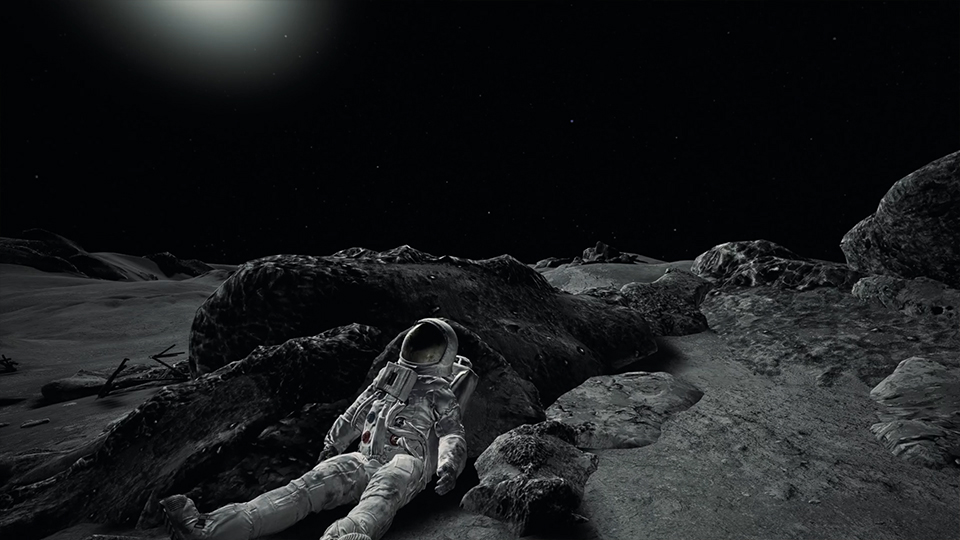 You’ll find yourself in some crazy place is time…like on the moon!

Whatever your inclination towards VR puzzlers, anyone looking for a quality VR experience should give this a look as it highlights the strengths of the medium offering up an epic campaign with fantastic presentation.  I’ve said it on more than a few occasions that we don’t see enough of these quality VR experiences, but when we do get them, ignoring them does a disservice to the medium as a whole and these types of ventures, especially from smaller studios, should be praised as they show us the true potential for games and the direction VR needs to head.

What would I pay? At $40 US, it’s a little pricier than the average VR title and totally worth it, offering up intriguing and very satisfying campaign.