For those in the know, Ultrawings released nearly 5 years ago and is hailed as one of the 1st flight “sim” games available in virtual reality that delivered on the true feeling of soaring above the landscape.  The sequel is now upon us and looks to deliver more with new aircraft, locations, challenges & modes designed to maximize the fun you’ll have in the air. 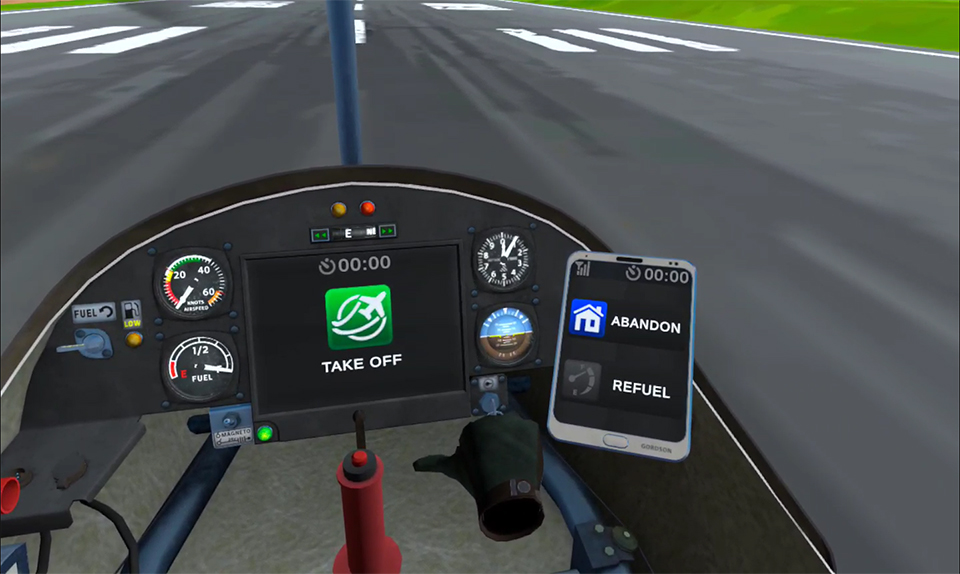 The first step is always the take off!

If you have played the first game, you’ll be instantly familiar with most of the mechanics in the sequel as they are largely the same.  There are 5 new craft available with you starting off in small hanger and are required to perform a few basic flight drills to get your 1st license before you can start taking contracts.  The first craft you’ll have access to is a small biplane that cruises around the skies at relatively slow speeds, easing you into the basics of flight and landing.  You’ll have to start and control each plane by flicking switches and buttons before grabbing at the rudder between your legs to control your flight.  A lever to your left will adjust your speed with the rest of the planes having additional options for flaps, brakes, mounted machine guns or grenade drops and for those that enjoyed shooting balloons with a handgun, those missions are back as well.  As you complete each contract (over 300 at launch), you’ll accrue loot which can be spent unlocking the next island or aircraft with the game throwing more and more challenging tasks your way.  The first 2 vehicles offer relatively slow speeds easing you into the game but once you unlock the Comet plane, speeds dramatically increase and make for some very harrowing flights.   What is new to this series is the aerial combat which currently has you facing off against some mindless drones or more deadly AI controlled planes in some thrilling dog fight action.  I’m not going to say it’s Ace Combat levels of intensity, but it’s damned satisfying to shoot down your AI foes during the “Ops” mode as they try and take you out as well.  Whether you’re flying through rings, shooting balloons, racing through stunt courses or just enjoying the sights, there is a ton of content to chew through ensuring countless hours of gameplay. 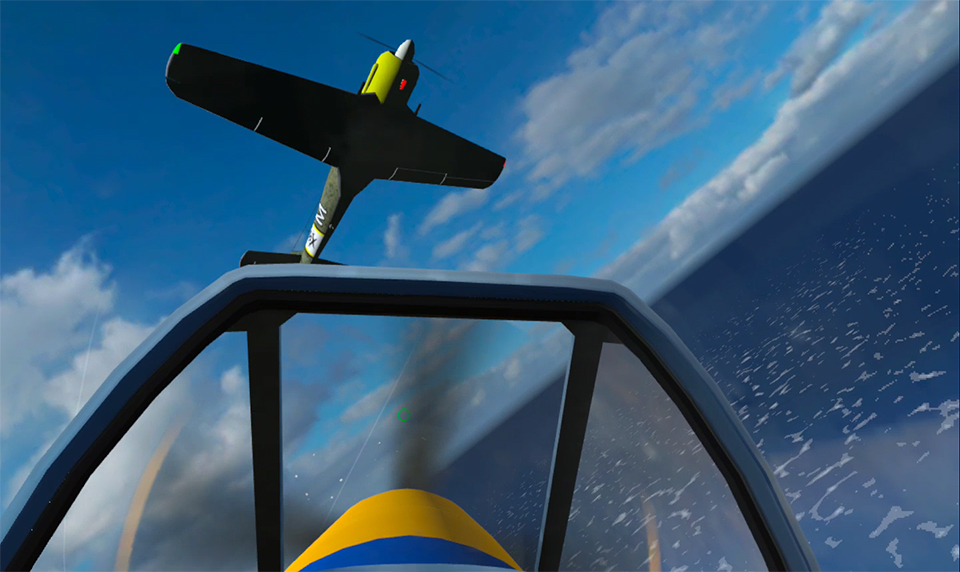 The dog fights are a blast!

Ultrawings was never praised for its visuals, opting for a barer bones cartoonish art style that was made up for by the scale of the world you are flying in with the Quest 2 version of the sequel having a very similar style.  It’s obvious when looking at the PC gameplay footage and the Quest 2 footage that the higher quality graphics expected in a sequel were dialed back for the mobile headset to ensure the core experience and gameplay remained intact.  Ultrawings 2 doesn’t look bad considering the Quest platform, but those expecting anything mind blowing may be a little disappointed.  That said, the fact you can see to the horizon in any direction is awesome but look to close at any of the textures across the landscape below you and many don’t hold up to intense scrutiny, though the art style does go for a little more realism, which I did appreciate.  When you are flying over a city, chasing other planes or flying through rings and your focus is on your target, the visuals do a fine enough job at getting things done.  The scale of the game seems to be larger than its predecessor with the islands having a little more variety and activity with landmarks that stand out a bit more and even some ground traffic, adding additional realism to this arcade/sim hybrid flyer.  It might not be the most amazing looking title but, once more, it’s impressive to see a game of this scale on the Quest platform and regardless of the visual shortcomings, the flight is awesome!!!

In between flight missions, you’ll be treated to a female and male host who help guide you through menus and tasks as well as applaud your gold medal efforts while deriding anything less.  The campaign has a host of forgettable ‘elevator music’ type tunes that keep everything light-hearted and happy and even though not one stood out to me, they never offended, nor did they ever really get old.  The sounds of your vehicles are the star of the show with the wrrrr and rumble of the engines sounding great with other smaller effects like rain hitting your canopy or the other vehicles nearby all sounding great thanks to some solid 3D audio.  The 2 hosts did repeat themselves after awhile, but outside of one that issue is some great sound design. 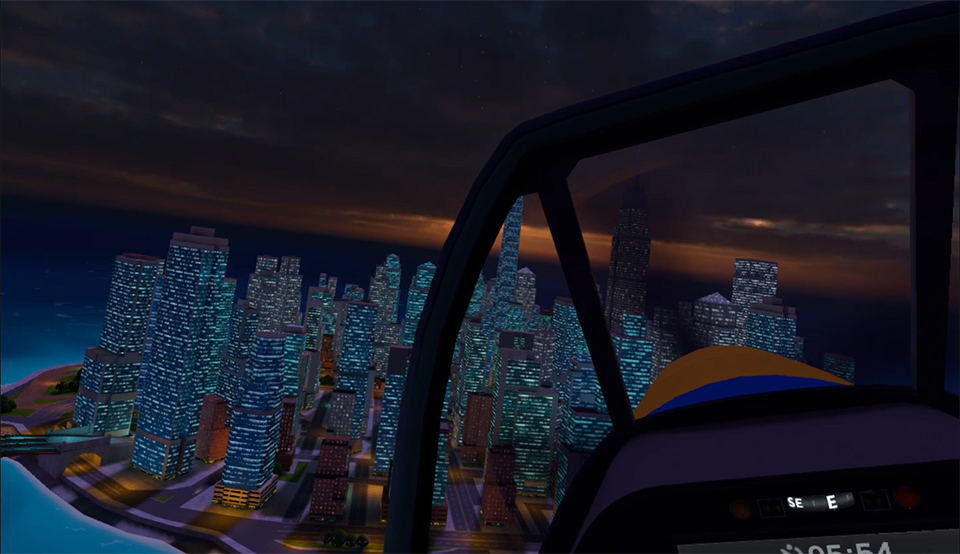 There are some fantastic views in the game!

At launch, Ultrawings 2 is essentially the same game as the first save for the additional combat missions, which are a ton of fun. Many of the missteps from the first game are still in this sequel and they do hamper the fun a bit.  For starters, every time you fail a mission, you are forced to go back to the hanger and from there you can replay or do something else but when I failed multiple times on the same mission, I really missed the option to restart without having to exit and reload the game every time.  You can walk around the hanger areas using smooth locomotion but click-turning is your only choice which just feels wrong in 2022.  Some of the missions do start to feel a little samey though the additional differing mission types compared to the 1st game do keep things a little fresher.  With that said, the plans for the game in the coming months make this current launch almost feel like an early access release as not only are there new maps, modes and areas being added to the game, but 8 player multiplayer is also in the pipeline allowing for competitive dog fights as well as some additional online modes if the initial multiplayer launch gets some traction.  With the dog fighting being easily the best addition to the game, multiplayer should be fairly popular which makes its absence at launch all the more noticeable.  Add to that the PC release which should substantially boost the look of the game (and include HOTAS support) and I just can’t help but feel like I’m playing 75% of the game but with that said, it’s still one helluva game! 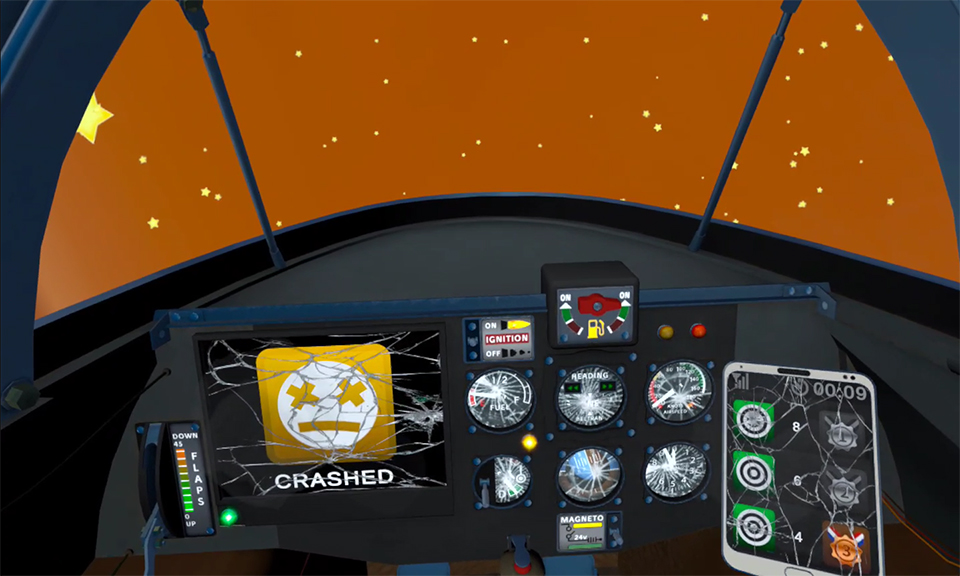 You’ll see this quite often throughout your play!

Ultrawings 2 is a bigger and better game than its predecessor in almost every way which I believe is the #1 goal for any sequel.  Outside of the new combat missions though, this follow-up feels almost more like DLC as all the issues that hurt the 1st game are still present here with the core game design being almost nearly identical.  Thankfully, the 1st game was a fun time in any headset and if you enjoyed that then you’ll definitely have fun with this as it has new aircraft, maps and modes and the incoming multiplayer dog fights should push this franchise into greatness.

What would I pay? At $25, whatever misgivings I have mentioned should be taken as minor issues at worst as the core gameplay is fantastic and there is currently a ton of content to get through.  Those looking to enjoy flying VR have another gem on their hands!

Bit Planet Games provided The VR Grid with a press code for this title and, regardless of this review, we thank them for that!